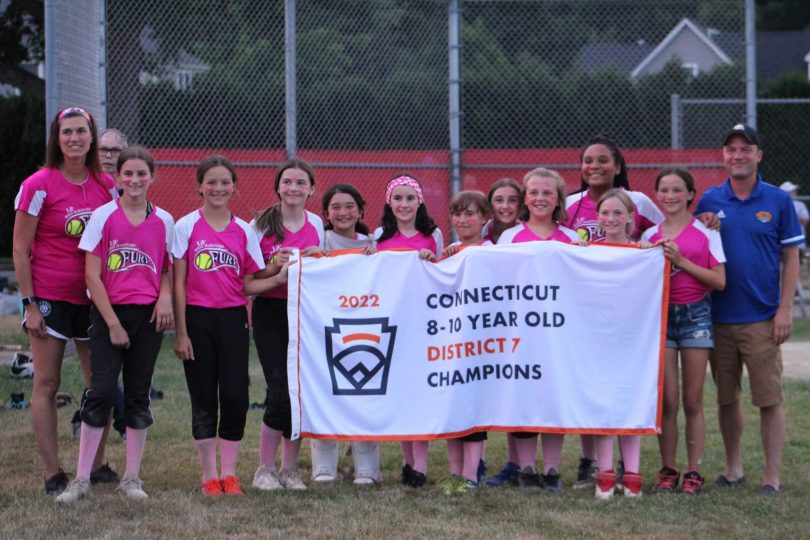 This is just the second year in recent history that West Hartford fielded a 10U softball all-star team. [Updated]

Last spring, Beth Taylor decided she wanted to put together an all-star team from the West Hartford Girl Softball’s minor league division, in which her daughter played, to participate in the Little League Softball World Series Tournament.

This was the first time West Hartford entered a 10U softball team in roughly 15 years.

The team lost every single game that summer. They weren’t able to make it through a full game before the opposing teams accrued so many runs that they ended due to the mercy rule. One of the issues was age – the team was comprised of only one 10-year-old and the rest were 8 and 9. They also hadn’t yet seen umpires, fast pitching, leading, or stealing.

“West Hartford was extremely disadvantaged from an age and experience standpoint, and it showed,” said Taylor.  “We took our punches, to say it lightly. Every game during last year’s tournament was demoralizing and left us in shock. I could not believe how polished the other 10U teams were. It motivated me to come back next year with a similarly polished and skilled team.”

Despite their disappointing run, many of the girls were inspired to make a deeper commitment to the sport. Nine girls from the 2021 all-star team went on to join travel teams that play for nine months of the year. Some of those players came back to play in the West Hartford Girls Softball League this past spring, which is required in order to represent the town in the Little League tournament.

With eight girls returning from last season’s all-star team, Taylor added six new players and the team won four out of six games in the round robin play for District 7. West Hartford managed two wins apiece against Rocky Hill and Cromwell, winning all four games by at least seven runs. “The minute the girls stepped onto the field at game 1 of this year’s tournament, we were a completely different team,” said Taylor. “They were more confident, skilled, and knowledgeable.”

Natalie Taylor pitched a complete game and was impressive, striking out 14 and giving up only four hits. Ally Johnston led the team offensively with three hits and four RBIs. Lena Leung and Taylor each had two hits. The entire team was stellar on Tuesday night, making solid contact at the plate and drawing crucial walks, running the bases smart and aggressively, and enthusiastically cheering and supporting each other.

This was West Hartford softball’s very first Little League district championship in any age group. “They have so much to be proud of,” said assistant coach Rick Mace. “Championships don’t come around often. Even for the best teams, it’s easy for something to go wrong along the way. This is a special group of girls that truly earned it.”

“We are beaming with pride for West Hartford softball,” said Taylor. “The future is bright!”

The team moves on to sectionals where it will compete against the District 9 and 10 winners to earn a spot in the state finals. West Hartford’s first game is on Friday at 6 p.m. at Elm Ridge Park in Rocky Hill.

Editor’s Note: This article has been updated.