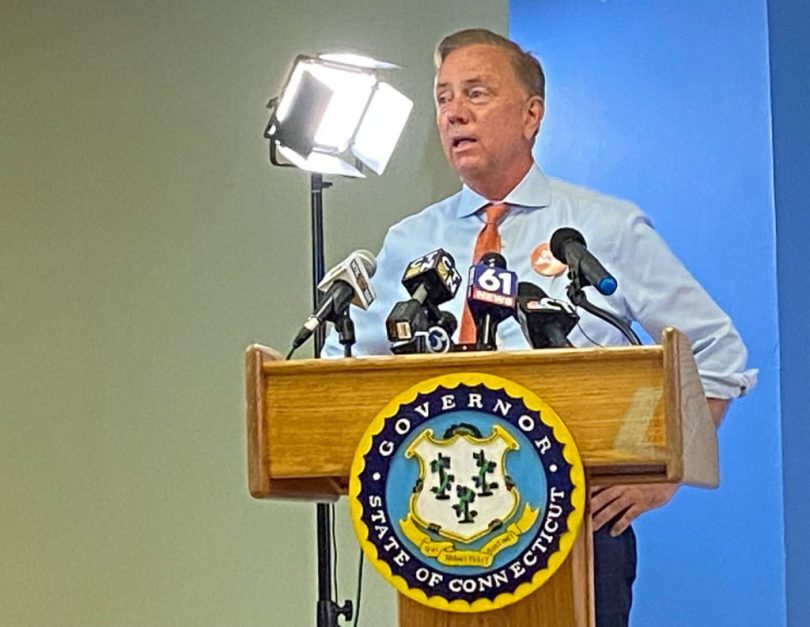 Gov. Ned Lamont celebrated the signing of two bills that seek to prevent gun deaths, violence, and suicides at ‘Hartford Communities that Care’ on Tuesday.

During an event at a Hartford nonprofit, Lamont and organizers celebrated a law that enables Medicaid to fund violence prevention programming like the services the organization offers. The other law expands the state’s “red flag” law, enabling courts to issue risk warrants for police to seize firearms from potentially violent or suicidal people.

The governor signed both bills back in June and Tuesday’s event was meant to highlight their impact. But the ceremony came as sometimes violent carjacking incidents continued to grab headlines around the state. The Hartford Courant reported Tuesday that a man was shot outside his Addison Street home after encountering a would-be thief attempting to break into his vehicle.

The Addison Street incident is related to a fiery crash in West Hartford that sent three to the hospital Tuesday morning.

A teen was charged the stealing of a vehicle with a 2-year-old in the backseat in West Hartford last week, an incident that ended with a crash.

Lamont said his administration has been working with police chiefs and court administrators on policies aimed at juvenile crime prevention and expanding the information available to judges as they decide whether a youth offender should be detained.

“In many cases … that judge does not know whether this is just a first-time indiscretion, and you want to head that off and make sure it doesn’t happen again, or whether it’s the ninth time and you got a chronic offender and they deserve a different type of response,” Lamont said. “Our judges are going to be in a much better position to make sure we have the appropriate response.”

Many local police chiefs have been outspoken on the issue, citing cases where they’ve encountered difficulties detaining a small number of juvenile offenders despite dozens of prior arrests in some instances.

On Tuesday, James Rovella, the state public safety commissioner and former Hartford police chief, said he had met with law enforcement leaders around the state and believed much of the problem was attributable to a small number of kids. Rovella estimated there were between 100 and 200 habitual offenders. He said police need flexibility to detain them.

When a bipartisan working group of lawmakers began meeting this month to discuss policies aimed at reducing youth crime, one proposal offered by some Republicans would allow police to hold young offenders beyond a six-hour limit to allow more time to seek a detention order. On Tuesday, Rovella said he did not believe that change was necessary.

Sen. Doug McCrory, D-Hartford, said policymakers need to focus on addressing systemic problems like poverty and limited opportunities in cities if they truly want to address the issue of youth crime. He said interventions need to occur long before children reach their teens.

“We gotta start reaching these children at the ages of 10, 11, 12 years old and stop catching them once they’re problem is already in front of our faces,” McCrory said. “If we gotta change policy when these kids are 15, 16, 17, we have lost the game.”

Although lawmakers continue to meet and discuss the issue, it remains unclear what changes they will eventually recommend and whether they will require legislation. In a morning press release, Senate Minority Leader Kevin Kelly, R-Stratford, called on other legislative leaders to broaden the scope of the bipartisan talks and open them to the public.

“Connecticut is at a crossroads when it comes to making our state safer,” Kelly said. “We can choose quick fixes and nibble around the edges. Or, we can start down a new path to not only establish appropriate consequences to combat crime, but also to prevent crime, to create opportunity and hope, and to rehabilitate by looking at the big picture.”

In a phone interview, House Speaker Matt Ritter said the process would be open to the public if lawmakers determined legislation was needed to address the problem. At that point, public hearings would be held, he said.

“I have no problem with that. I would remind [Kelly] that these meetings are bipartisan,” Ritter said. “So they’ve been working in good faith and having conversations with the judicial branch. But ultimately, when they’re ready to move forward with concepts, there will be a public hearing, absolutely. And I would encourage the Senate to stay engaged in the process.”

The spike in youth crime and auto thefts has played out around the country and some criminal justice experts believe the issue may subside alongside social disruptions due to the coronavirus pandemic.

State Rep. Jillian Gilchrest, D-West Hartford, was present at the ceremonial bill signing Tuesday, and praised the work of Hartford Communities that Care. “They’re on call 24/7. They show up at the hospital when someone has been shot. They provide this intervention in the ER waiting room to ensure that there isn’t retaliatory shootings,” she said.