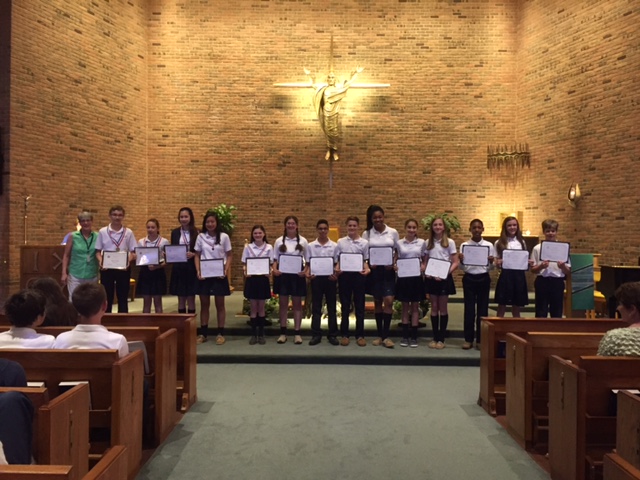 Students were evaluated for their written, oral and listening comprehension skills in French. More than 85,000 students in all 50 states competed in the 2017 event. French students who rank nationally demonstrate a superior level of global responsibility, language skills and commitment to excellence and dedication.

For seventh graders, 5,064 students took the Level One Test and more than 60 percent of the STMS students have been recognized for their achievements. In seventh grade the school had 11 students who earned “Mention Honorable.” They were Reagan Baker, Roland Barnes, Ashley Casciani, Douglas Doyle, Brayden Hendsey, Julia Lazzaro, Brianna Lebrun, Ryan Murphy, Jervis Nunez. Charlotte Olin, and Mia Porcello.

In the eighth grade over 20,000 students took the Level One Test and again more than 60 percent of the St. Timothy students have been recognized for their achievements. First there were seven “Mention Honorable” winners who scored in the 50-70th percentile. They were Miles Bryant, Michael Culligan, Maeve Dabney, Declan Ferrell, Nolan Horan, Griffin Macary, and Isabella Morsheimer.

When asked about how the students were able to score so well, Mrs. Kath Thomsen, French Teacher, commented, “I am so proud of every single student who took the exam, and I admire their ability to strive to continually learn, improve in, and value the study of French.”

Principal Tara Bellefleur commented, “The skills that students learn in French at St. Timothy Middle School transfer to their studies across the curriculum. Their diligence, determination and dedication is exceptional. Their success is a by-product of their hard work!”