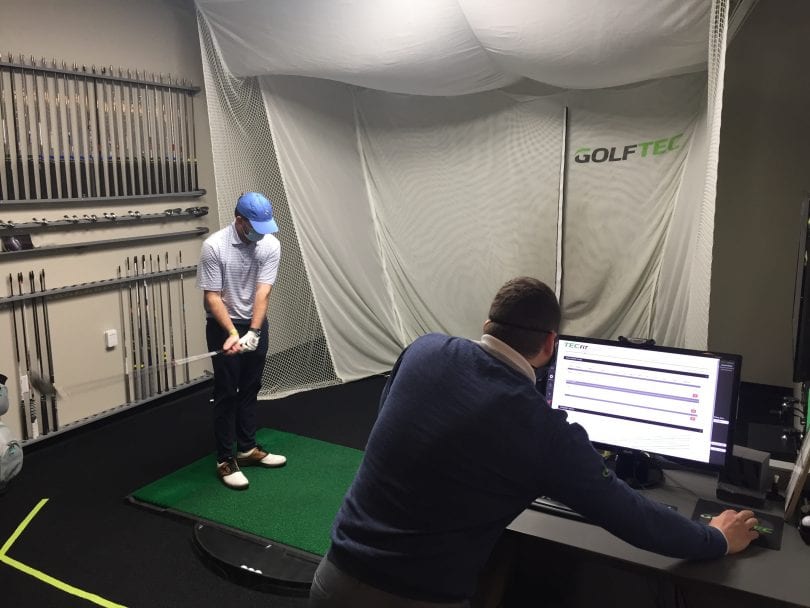 Garrett Hickey (left) said getting properly fitted for clubs by Dave Souza at GOLFTEC (right) in conjunction with looking at the mechanics of his swing with each club, has already made a major difference in his game. (we-ha.com file photo)

After just one lesson and a club fitting at West Hartford’s GOLFTEC, this golfer has seen vast improvement in his game. 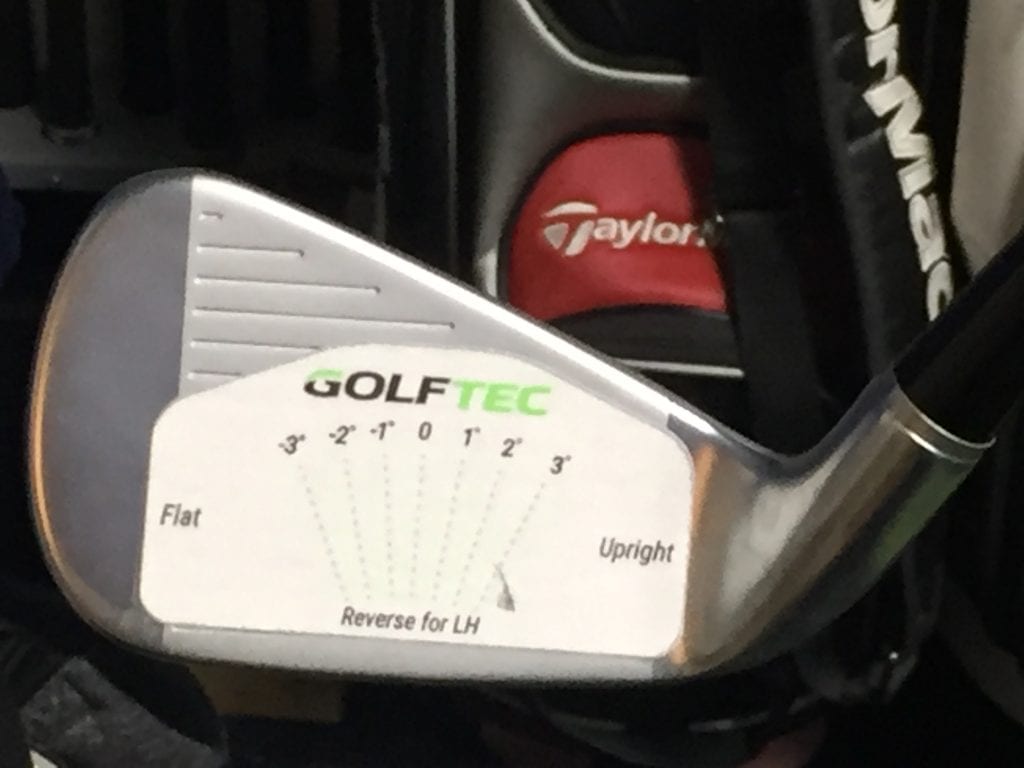 If a player hits consistently to one side of the club, adjustments can be made to center the contact. Courtesy photo

My goal for my golf game has always been to continue to improve enough so that every time I step on the course, I am consistent and confident in what I do. I have been playing/practicing my golf game consistently for the last six years and have improved tremendously.

As I continued to play, I realized I needed a new set of clubs. My parents had given me the set I currently use some 15 years ago when I was still in high school. It was time for an upgrade.

As I sat with a friend one day talking about new clubs, he told me that I should look into getting a club fitting. I was not sure that was what I needed or how to go about getting one, but he had recently done this and continued to boast about it. Eventually, I went home and looked up GOLFTEC, as I remembered it being close to my parents’ home in West Hartford. I scheduled an appointment to have a full bag fitting and, boy, was I happy! 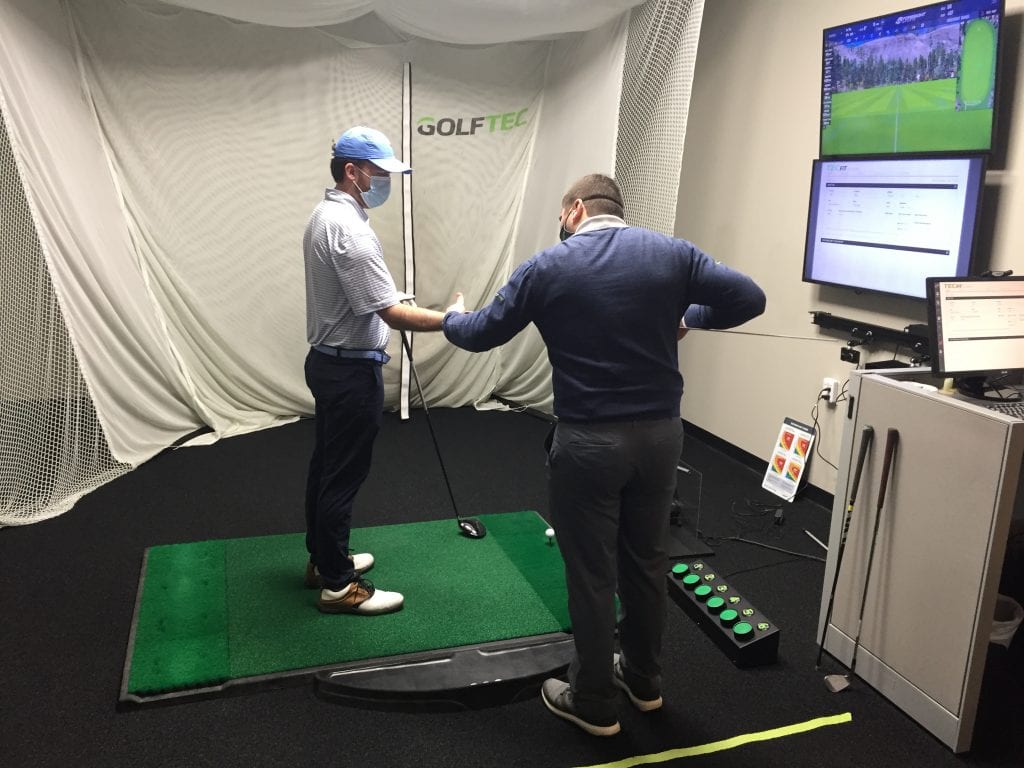 Measurement of Garrett’s hands and reach to the ground for proper grip size and club length. Courtesy photo

My fitting coach, David Souza, explained to me the science behind taking a person’s swing and matching it with a club that will get the most out of that person’s potential. David was able to communicate the numbers, graphs, and pictures in such a way that was easy for me to understand (I could even recognize and identify it on my own almost immediately).

The first thing we looked at was my driver, which is the weakest and most inconsistent club in my bag. David started by having me hit some balls with my current driver and explaining to me the numbers that were showing up on the screen. 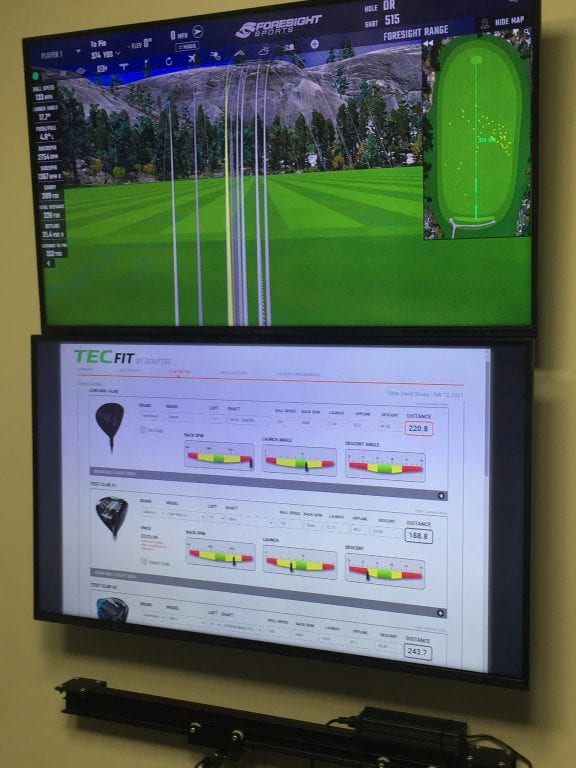 These numbers all correlated to why my club/ball was doing certain things. My numbers were supposed to be showing up in the center of the gauge, but I wasn’t even close.

Next, he measured my hand to figure out the size grip that is best for me, looked at shaft weight, and a bunch of other things. Then we spent time hitting different clubs and adjusting as needed.

Although I did not hit my driver as consistently as I would have liked, by the end we found a club that I was hitting 23 yards farther than my current driver (when I hit it properly). I was very happy and surprised as I had no idea about all the different things he changed to find a club that was best for me. I am excited to get back for a lesson with my driver to start improving upon some of the things David showed me during my session. 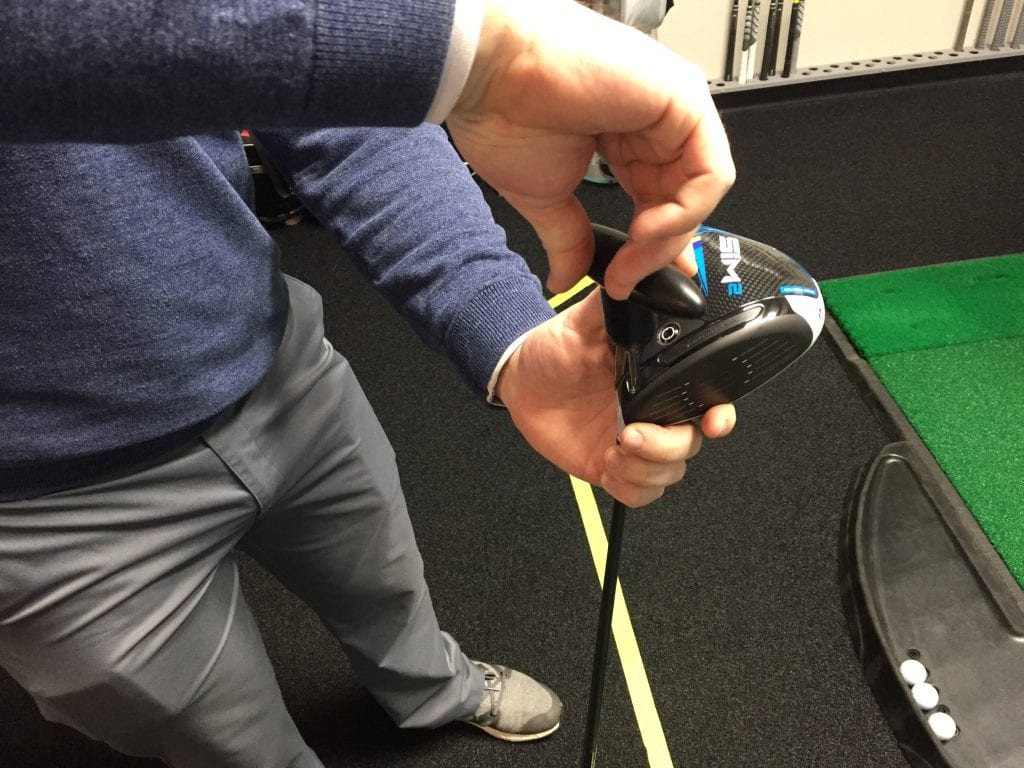 Dave Souza adjusting the loft on the driver to get the perfect trajectory on drive. Courtesy photo

Next came the iron fitting. I did not need to hit every single iron in my bag because David explained that the 7-iron is a median for the rest of the clubs in the bag. I began hitting my shots at a much more consistent rate. Then we started doing the same thing as I did with the driver, changing the grip size and texture, shaft weight, angle of the face of my club, etc. David even gave me a little pointer on how to set up my iron shots every time to keep my ball striking more consistently.

After all was said and done, I had about 11 more yards on my 7-iron shots with this new club. Again, I was extremely happy with those results. 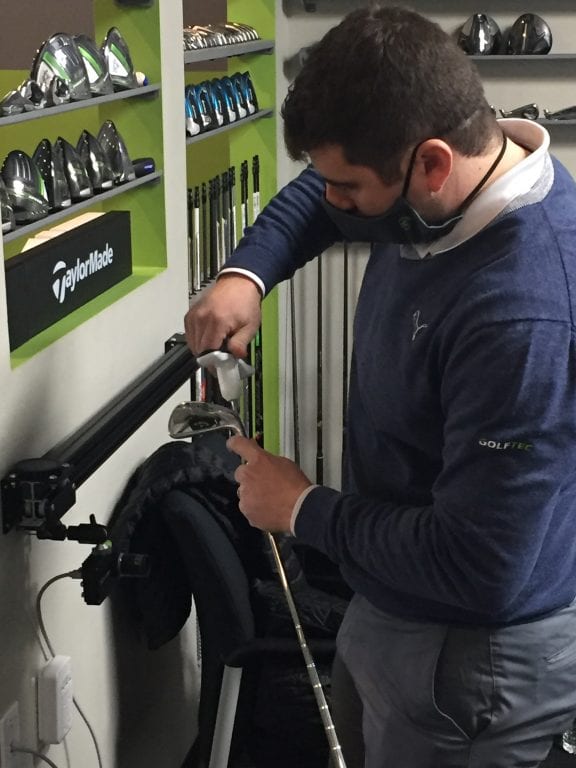 When I walked outside, I said to myself, “I can’t believe all the science and numbers behind this stuff.” More importantly, I was so happy and pleased with working with David for those two hours.

It is not the easiest thing to continually hit in front of someone knowing they are watching and recording you. But he made it very comfortable and even after a few bad shots I didn’t feel discouraged. The entire time I was locked into his knowledge and all the different aspects to look at in a swing.

When I now go to simulators and hit, I can look at the feedback and make adjustments and understand what I am doing right and wrong. This is just after one session with David. For me that is the mark of an outstanding coach: take something a bit complex and turn it into something that can be easily understood.

I am very excited to get my new clubs and to go back and work with David on my game and I highly recommend you reach out to GOLFTEC before you hit your course. 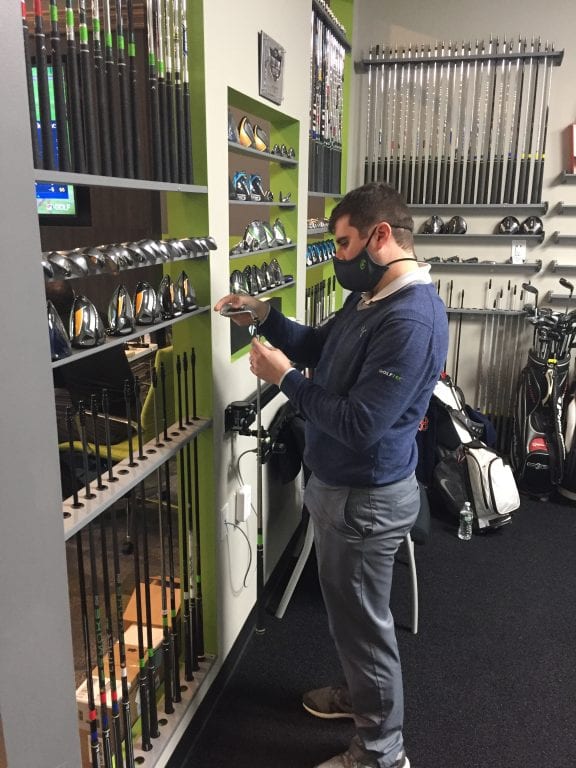 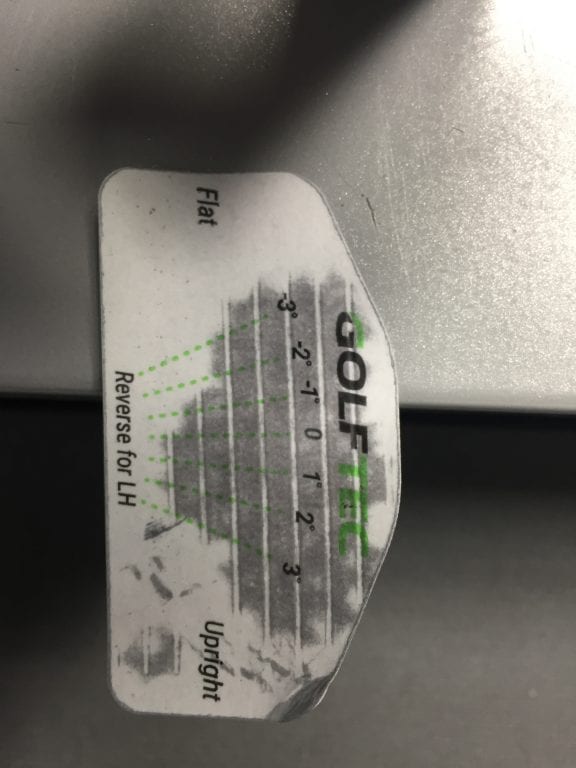 Tape designed to show the location of contact with the ball. Courtesy photo 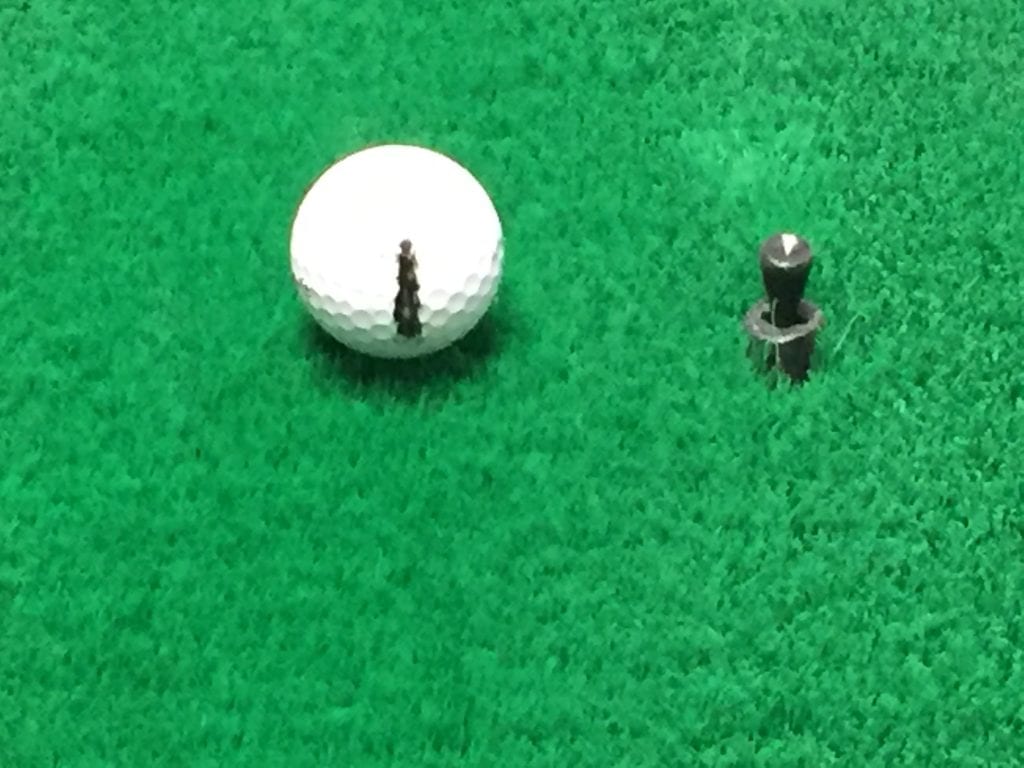 Black marker drawn in a line on the ball helps determine the proper lie angle for the golfer. Courtesy photo

A version of this article originally appeared in the March 2021 issue of West Hartford Magazine.