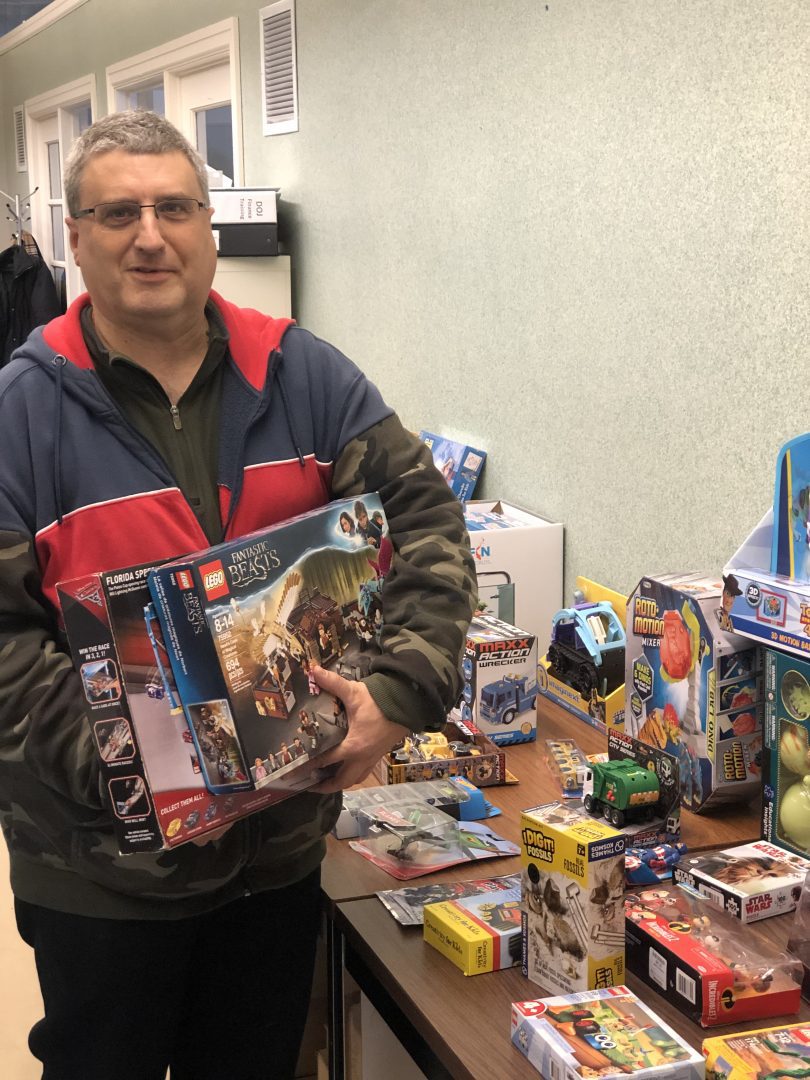 Longtime West Hartford resident Vinny DiNatale, a bus driver for Glastonbury Public Schools, has been a Big Brother (adult mentor) with Nutmeg Big Brothers Big Sisters for the past 11 years. In 2019, for his dedication to mentoring, DiNatale was presented an Outstanding Mentor award at a special reception hosted by U.S. Sen. Christopher S. Murphy in Middletown during National Mentoring Month.

During his time as a Nutmeg Big Brothers Big Sisters volunteer, DiNatale has mentored two boys. He mentored Nick – from Glastonbury – for seven years until Nick aged out of the Nutmeg mentoring program. Next, DiNatale was matched with 11-year-old Zeke from New Britain. Now, DiNatale is in the process of being matched a third time by his enrollment specialist at Nutmeg Big Brothers Big Sisters.

While waiting to meet his latest “Little Brother” (mentee), DiNatale has been keeping busy by organizing his annual Cram the Van Toy Drive – an event he has spearheaded since 2013, one that benefits kids enrolled in the Nutmeg Big Brothers Big Sisters program.

As a veteran Big Brother, DiNatale has seen firsthand the need experienced by many of the families participating in the well-known youth mentoring organization’s program, families who work hard to make life as smooth as possible for their kids, yet still finding it challenging – especially during the ongoing COVID-19 pandemic.

“The need is especially noticeable around the gift giving season,” DiNatale says. “With Cram the Van, I do what I can to gather toys that we give to as many of the kids as possible. In November and December I spend a lot of time telling people about it before the actual date. On the Saturday we decide to do it, I park the van – usually a couple of vans – at the Richard’s Irving gas station in South Glastonbury. Then, people come by and drop off their toy donations.”

Thanks to DiNatale’s hard work – and thanks as well to hundreds of toy donors over the years – countless children in the Nutmeg Big Brothers Big Sisters’ program have been able to experience a more enjoyable holiday season than they would have otherwise enjoyed.

“By the way,”DiNatale says, “I couldn’t make this happen without the help of the great people at the Richard’s Irving gas station, the support of everybody at Glastonbury Schools, and all the people kind enough to take time from their busy holiday obligations to stop by and make generous donations.”

Vinny DiNatale’s 2021 Cram the Van toy drive is scheduled for Saturday, Dec. 4 from 8 a.m. to 2 p.m. at the Richard’s Irving gas station, located at 890 Main St. in South Glastonbury. The effort benefits boys and girls, ages 6 through 18, who are enrolled in the Nutmeg Big Brothers Big Sisters program. Organizers hope to collect new and unwrapped toys, games and sporting goods. Gift cards and monetary donations are also welcome.