The West Hartford Exchange Club has not held its customary in-person ceremonies honoring members of the police and fire departments, and on Wednesday, May 18, made up for two year’s worth of missed events with a celebration of the Police Officer of the Year and Firefighter of the Year for both 2021 and 2022.

The recipients selected by members of their respective departments, based on criteria that includes “community service, commitment to the job and the community, outstanding service, and leadership,” the Exchange Club noted in an announcement.

Lt. Robert Howe – who was honored earlier this month with the Firefighter Cross – was named the Exchange Club Firefighter of the Year for 2021. Chief Greg Priest announced that the entire West Hartford Fire Department would be honored for 2022.

Regarding the decision to name the entire department for 2022,  Priest said that while there were individual actions, that could have been recognized, amid the difficult conditions of the COVID-19 pandemic, “the reality set in that the most-deserving of the recognition was actually the entire staff of the fire department who responded to the pandemic over the last several years. Certainly, the entire world, especially healthcare and public safety fields, have stepped up to the challenges, and while not minimizing the contributions of others, but the members of the fire department were instrumental in the local response.” 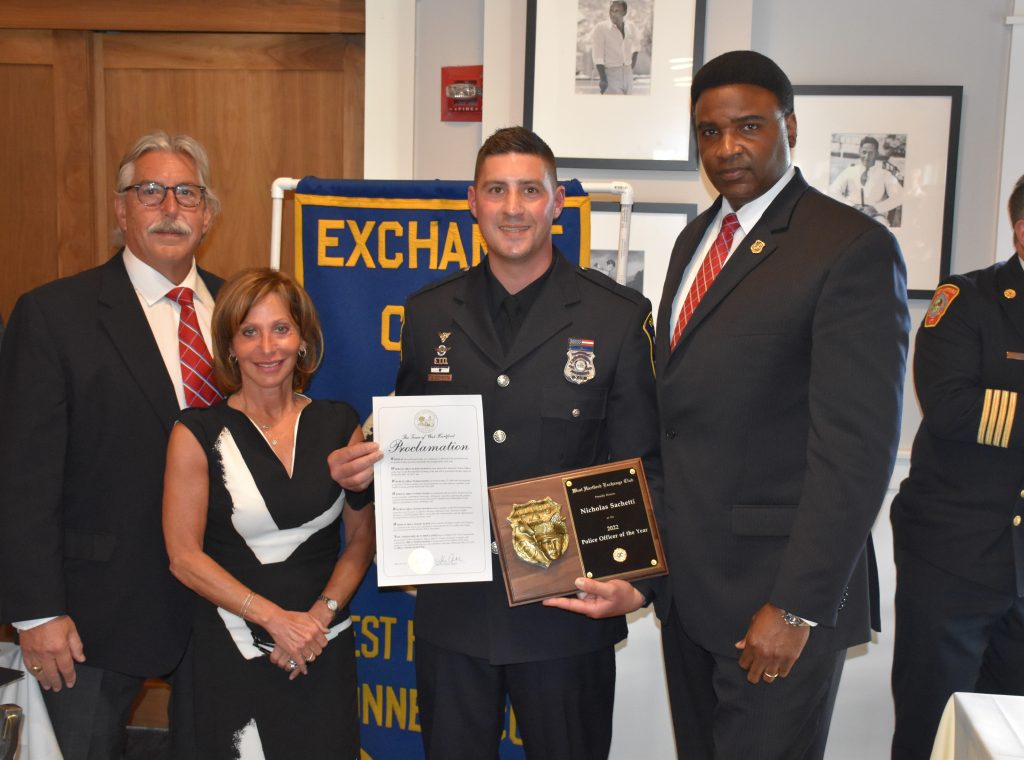 Chief Vernon Riddick announced that Nick Sachetti was named 2021 Exchange Club Police Officer of the Year, and Michael Boughton received the honor for 2022.

In addition to leadership and other members of the police and fire departments, and members of the Exchange Club, the event was attended by Mayor Shari Cantor, Deputy Mayor Liam Sweeney, Acting Town Manager Rick Ledwith, and Town Council member Chair Leon Davidoff.

Cantor, on behalf of the town, and in recognition for outstanding service, proclaimed May 18, 2022, as Robert Howe, the West Hartford Fire Department, Nicholas Sachetti, and Michael Boughton Day.

In addition to honoring public safety officers for their service, the West Hartford Exchange Club’s stated mission is “to make its community a better place to live through programs of service in Americanism, Community Service, Youth Activities and its national project, and the Prevention of Child Abuse.” The Exchange Club also awards annual scholarships to students graduating from Conard and Hall high schools, and donates to local charities such as The Bridge Family Center.