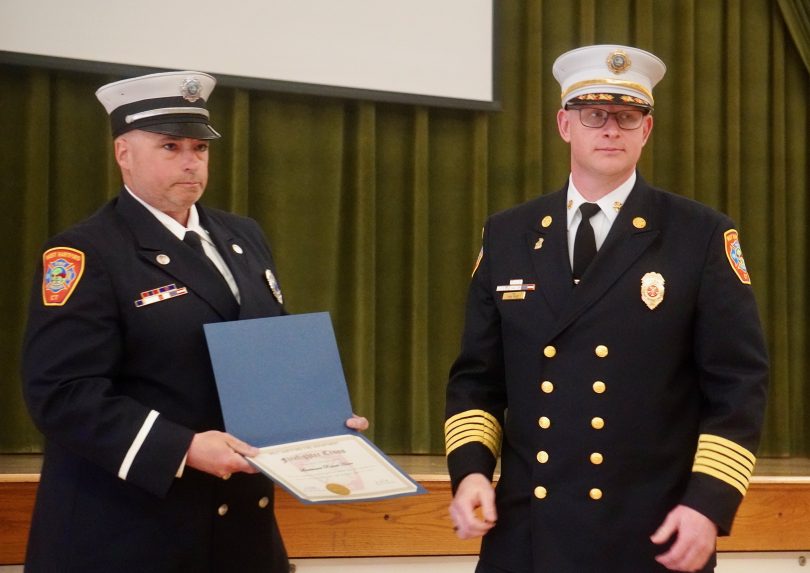 The West Hartford Fire Department honored members with a variety of service awards earned over the past several years. 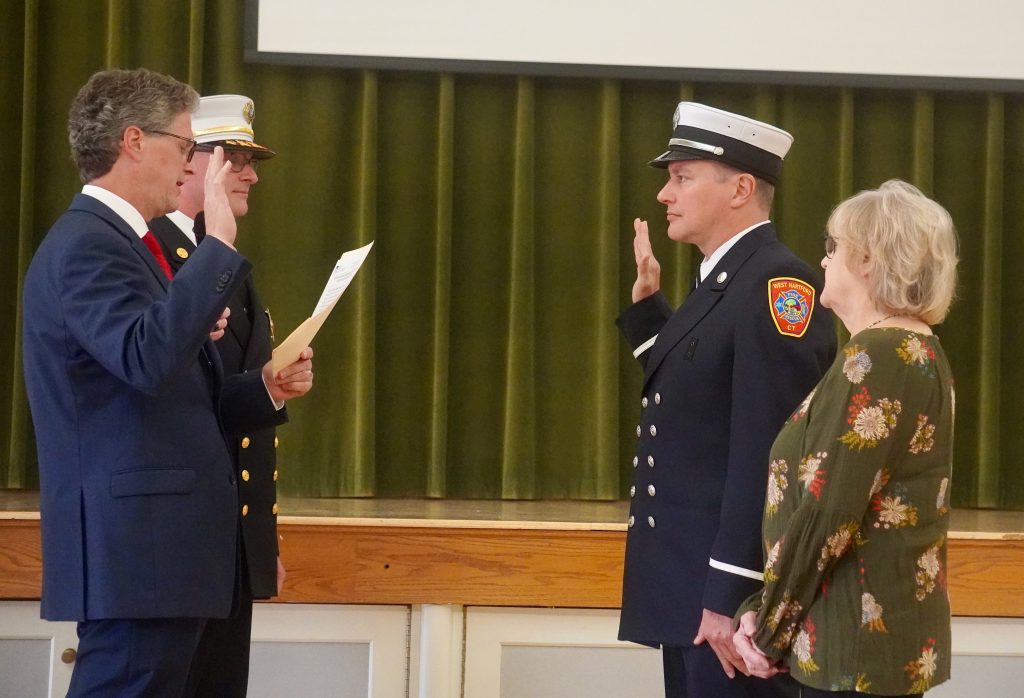 Capt. Brian Antigiovanni is given the oath of office by Acting Town Manger Rick Ledwith, before being pinned by his mother (at right). West Hartford Fire Department Promotion and Awards Ceremony. May 2, 2022. Photo credit: Ronni Newton

Members of the West Hartford Fire Department were honored May 2 at an event in the Town Hall Auditorium that celebrated several promotions, but also recognized those whose exceptional service over the period 2018-2021 has earned them a variety of departmental recognitions. 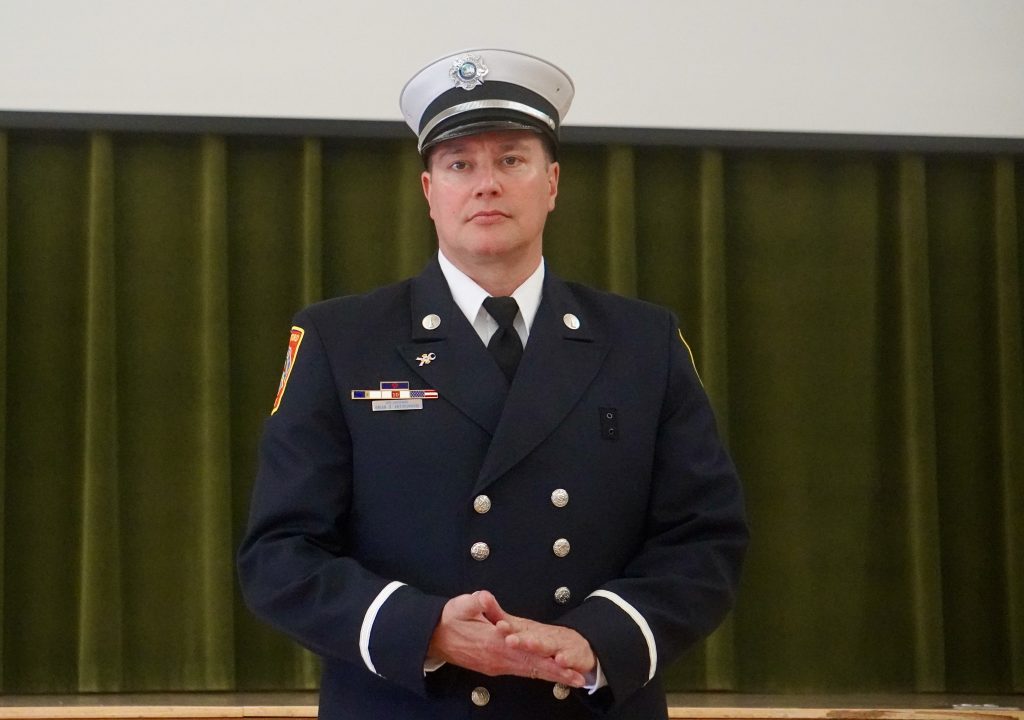 James Phillips, who began his career in 1997 as a volunteer and has worked as a carpenter, dispatcher, truck driver, EMT, and paramedic, has been with the West Hartford Fire Department since 2011. He has served as a HazMat technician and apparatus operator, and has now been promoted to lieutenant. 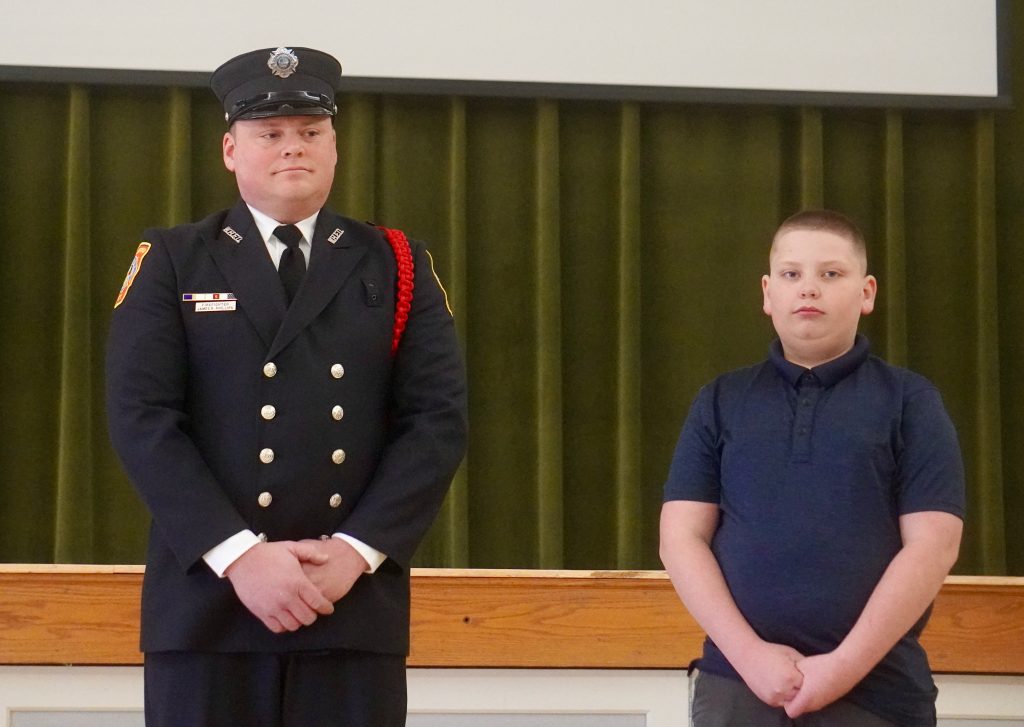 Lt. James Phillips was recognized for his promotion, and stands with his son who pinned him. West Hartford Fire Department Promotion and Awards Ceremony. May 2, 2022. Photo credit: Ronni Newton

Battalion Chief Jarrad Smith served as emcee for the event, which he also organized. Mayor Shari Cantor, who was traveling and unable to attend, shared a pre-recorded message with department members, commending them for extraordinary acts of bravery.

Acting Town Manager Rick Ledwith noted the acts of heroism and bravery that led to the commendations being awarded. “They will say they were just doing their job,” he said, but all who were honored were doing much more.

“Thank you for your tireless and selfless dedication,” Ledwith added. 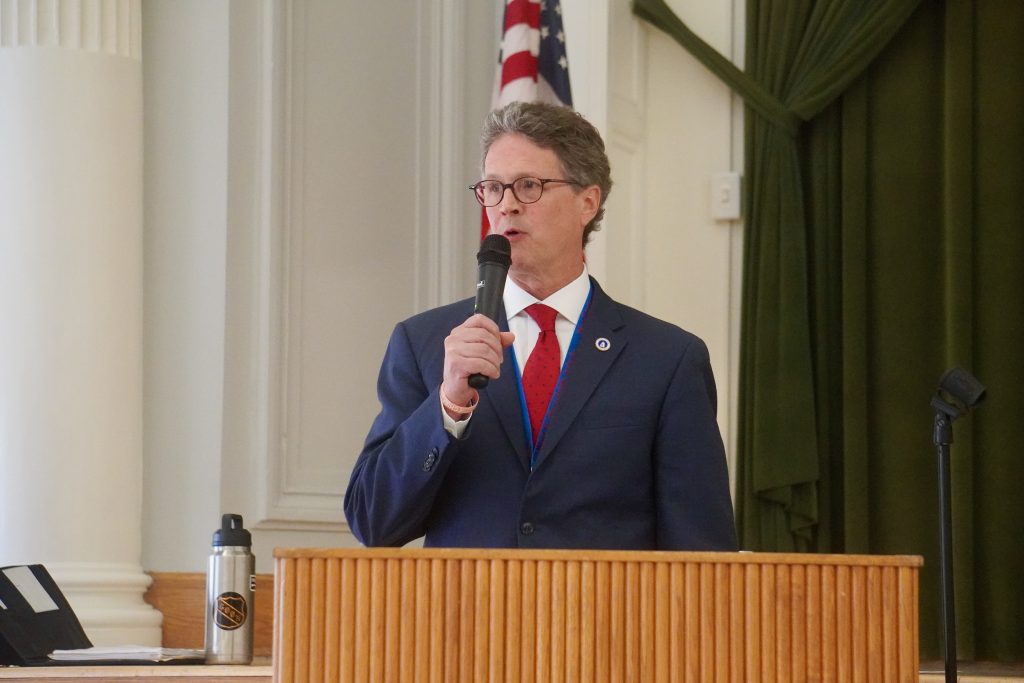 “If you have seen the lengthy list of awards, it’s almost overwhelming,” Chief Greg Priest told the crowd of family, friends, other emergency service department members, and town officials in the audience. “The reality though is these individual and unit accomplishments reflect that there is a lot of tremendous work that happens, but many times it’s behind the scenes and something like this ceremony is necessary to bring it to light.”

Priest took over the department in 2018, and initially focus on filling key positions, and while recently there has been a return to celebrating promotions, the last time there was an awards ceremony was prior to the start of the COVID-19 pandemic. Some of those recognized have retired, and others have since been promoted, with the awards noting their current rank. 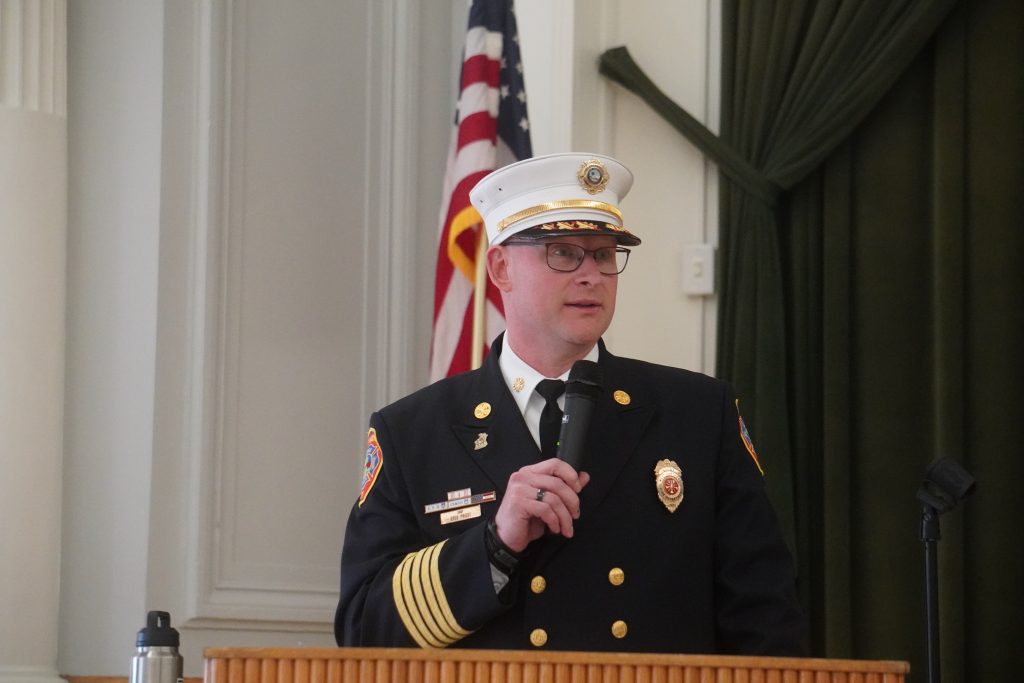 “The really good news is that while we may not have hit the mark in the area of recognition, our folks are really good at what counts, which is firefighting, EMS, rescue, community risk reduction, and serving our community,” Priest said “Today is about making up for missed awards and being consistent with recognizing post-pandemic promotions,” he said, adding that the department plans to conduct an annual awards ceremony going forward.

“Lifesaving and emergency situations are rarely individual efforts,” Priest said, noting that West Hartford Police and American Medical Response were also in attendance at the scene of many of the incidents for which members were being recognized, and were in attendance at the awards ceremony. “You are our partners in an effective emergency response every day, and I’m glad you are here with us as we recognize team efforts.”

Smith announced the recipients of each of the awards earned by department members and other emergency responders.

“Most of us did not choose this profession to achieve notoriety,” Smith said, noting that most people in the community aren’t having their best day when they are interacting with the fire department. Quoting Carl Sandburg, Smith said that the true test of valor is rising to the occasion when tested. 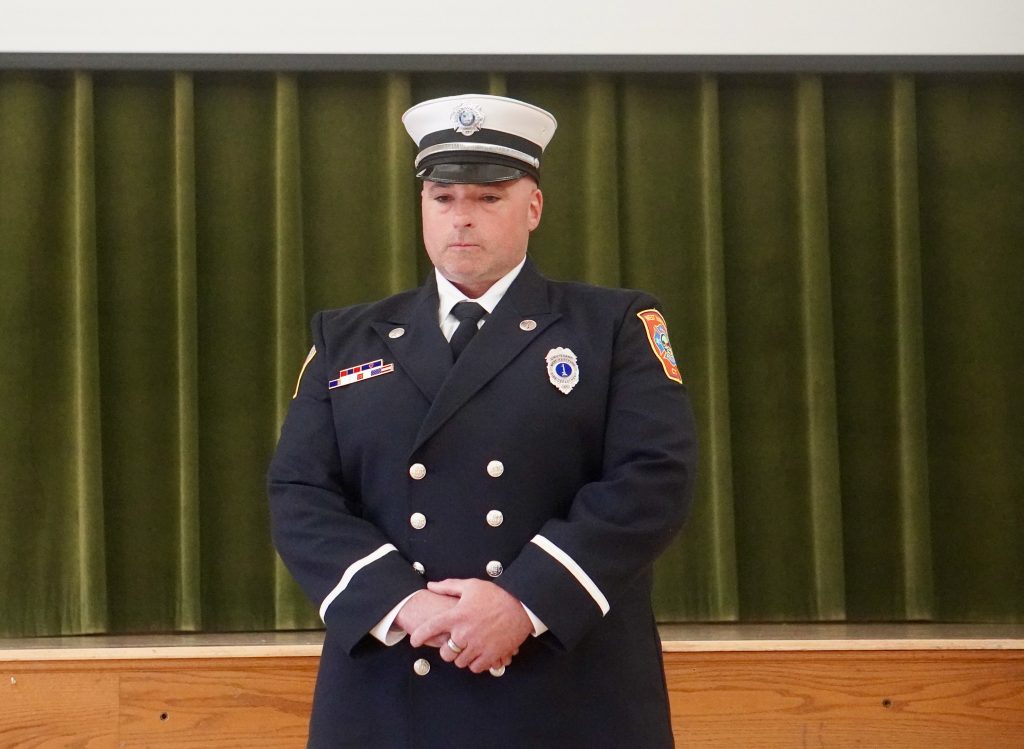 The department’s highest honor – the Firefighter Cross – was awarded to Lt. Robert Howe, who consistently rises to the occasion and passes “his test,” and “sets a very high bar for what it means to take decisive action when lives are at stake,” Smith said.

“It’s not the first time he’s been up here receiving a higher-level commendation for his actions in an emergency. Several years ago he was recognized for his life-saving actions at a major fire in town,” Smith said, but the most recent award involved his actions off duty, and involved great personal risk.

The incident which led to Howe receiving the Firefighter Cross occurred in April 2021. Smith said that Howe, who was recovering from shoulder surgery, had just arrived at his girlfriend’s condo in Tolland when he heard screams for help.

“Lt. Howe quickly determined that a young man was trapped in a condo unit that was on fire. Upon reaching the door to the condo Lt. Howe encountered a tremendous amount of heat and smoke. Recognizing that a life was in jeopardy, Lt. Howe removed his shoulder sling and despite the ensuing discomfort began to crawl under the intense smoke and heat. While crawling he was yelling the trapped victim’s name. It was not until 15 feet inside the condo that he was able to locate the trapped victim. Lt. Howe was able to remove the victim from the burning building. Thanks to his heroic and selfless actions the victim was not seriously injured, but it should be noted that the young man’s shorts had started to melt and his attached medical device was also melted due to his proximity to the fire.”

Despite his shoulder discomfort, Howe continued to assist in the incident, Smith said, using a garden house to keep the fire in check and providing assistance to the Tolland Fire Department until enough crew members had arrived on the scene.

Member of the Year awards – the Patrick L. Brooks Firefighter of the Year Award, named for a member of Local 1241 who died on duty in November 2002 – were given to individuals who stand out among their peers for excellence, and being selfless, caring, and dedicated, Smith said. “A professional who shows unwavering commitment to the department’s vision, mission, and goals 365 days a year.” The awardees for the past three years include Firefighter/Paramedic Rocco Laudato (2109), Lt./Paramedic Steeve Parent (2020), and Lt. Robert Howe (2021). 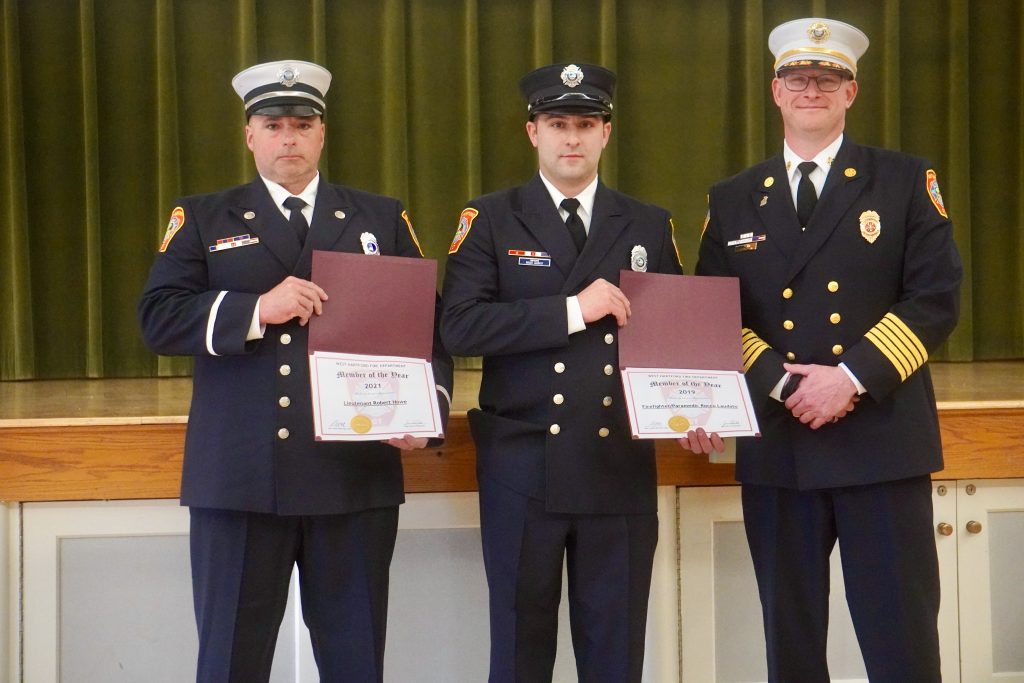 Mangione passed away from pancreatic cancer in August 2020. “In his last year of service, as he was battling stage 4 cancer and undergoing chemotherapy, Joe spent many hours training new drivers – something he had become exceptionally good at. At the tie of his passing Joe had personally trained every driver in the West Hartford Fire Department at one time or another. He was tough as nails, loved his family, and nothing made him happier than driving the big red truck. He is the only two-time Gene T. Hoffman Award nominee in our history,” Smith said. 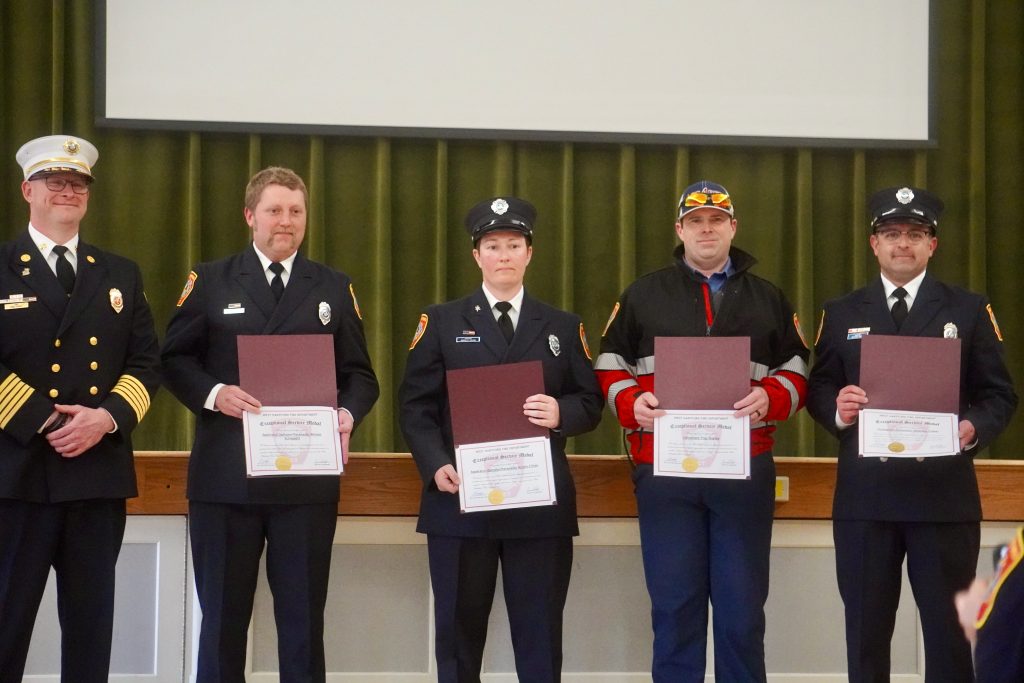 Exceptional Service Medals – “awarded to a member of the fire department who displays personal and/or professional excellence beyond organizational expectations in the performance of a member’s duties while carrying out the vision, mission, and goals of the West Hartford Fire Department” were presented to Lt. Troy Shipley, Apparatus Operator Kristin Fillian, Apparatus Operator William Schappert, Firefighter/Paramedic Matthew Traber, and retired Firefighter/Paramedic Jason Erban. 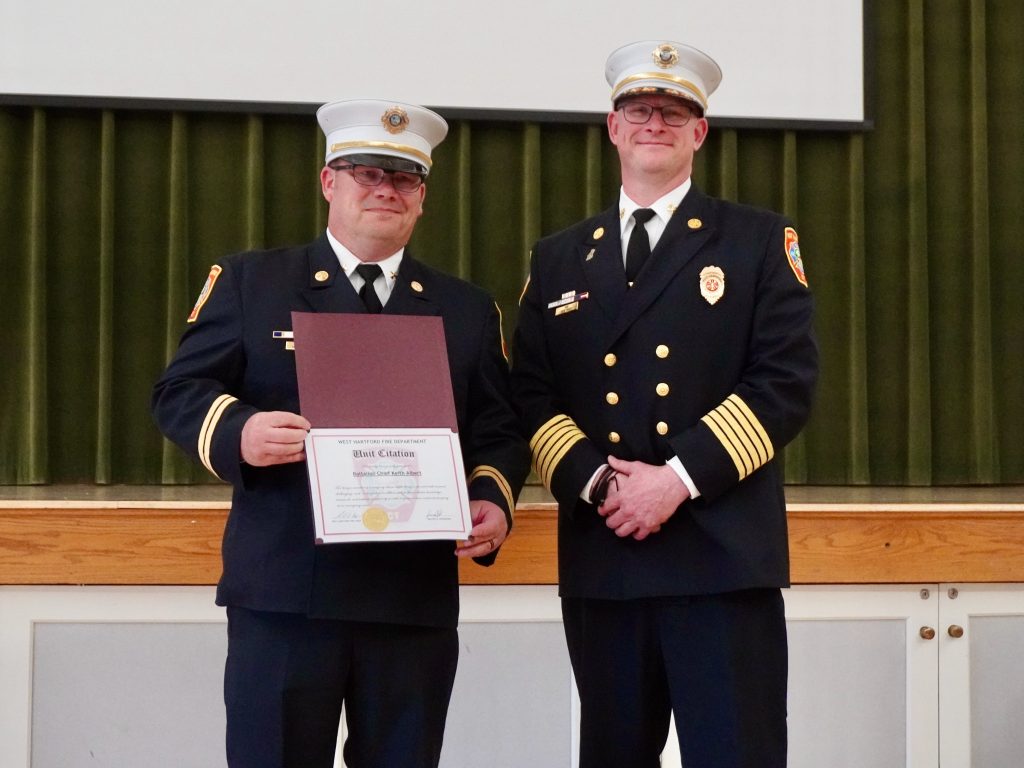 Battalion Chief Keith Albert was one of the recipients of a Unit Citation. West Hartford Fire Department Promotion and Awards Ceremony. May 2, 2022. Photo credit: Ronni Newton 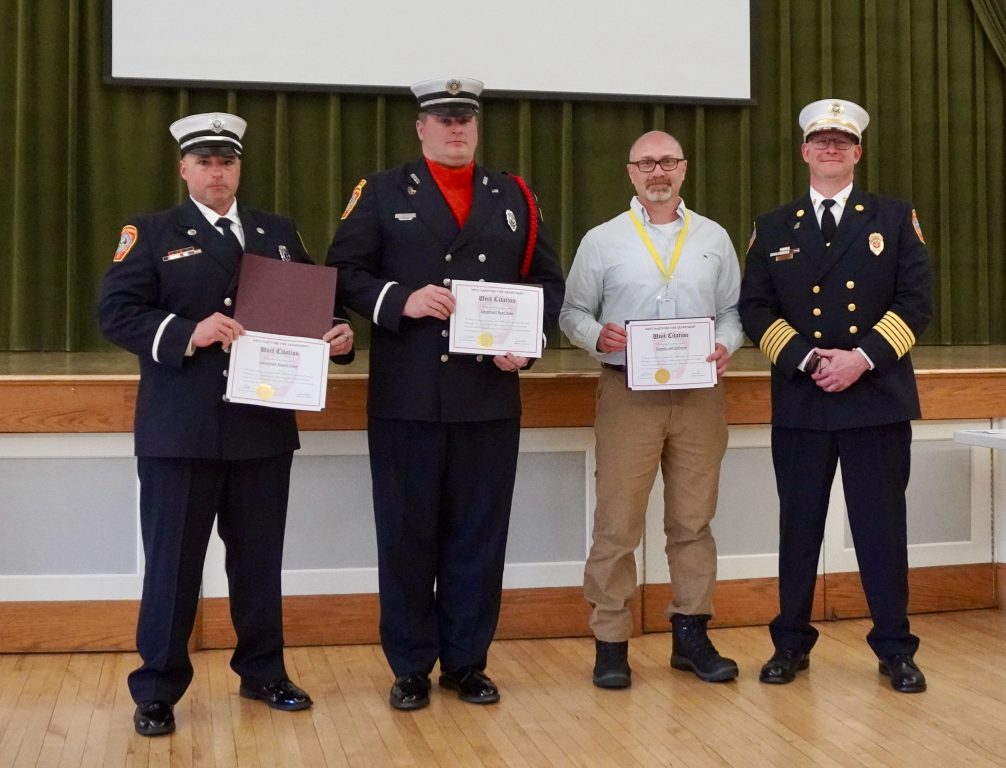 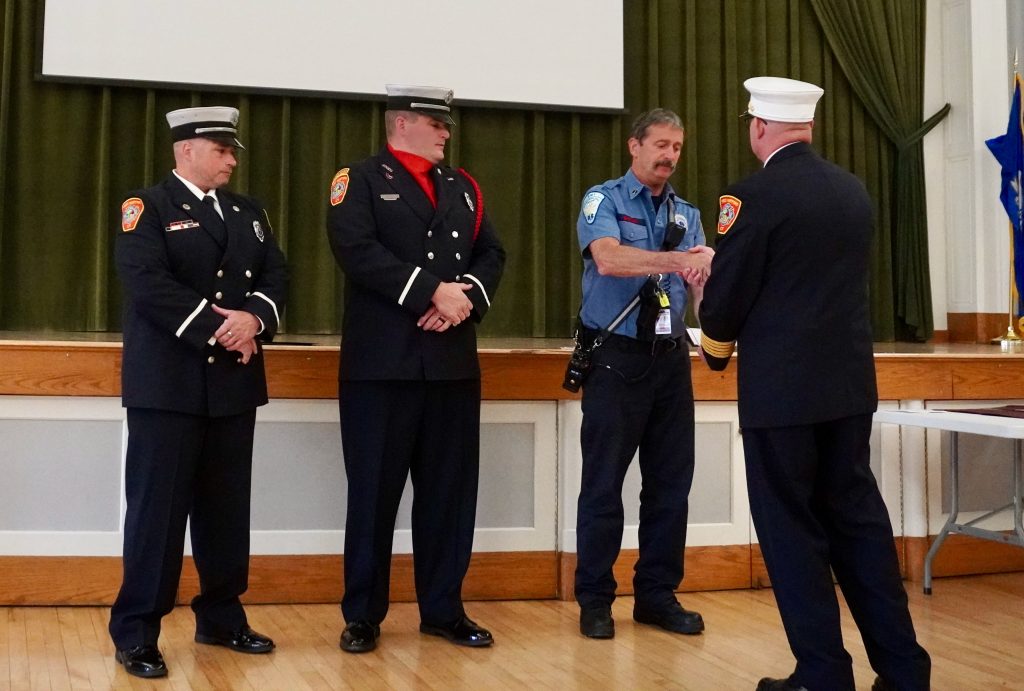 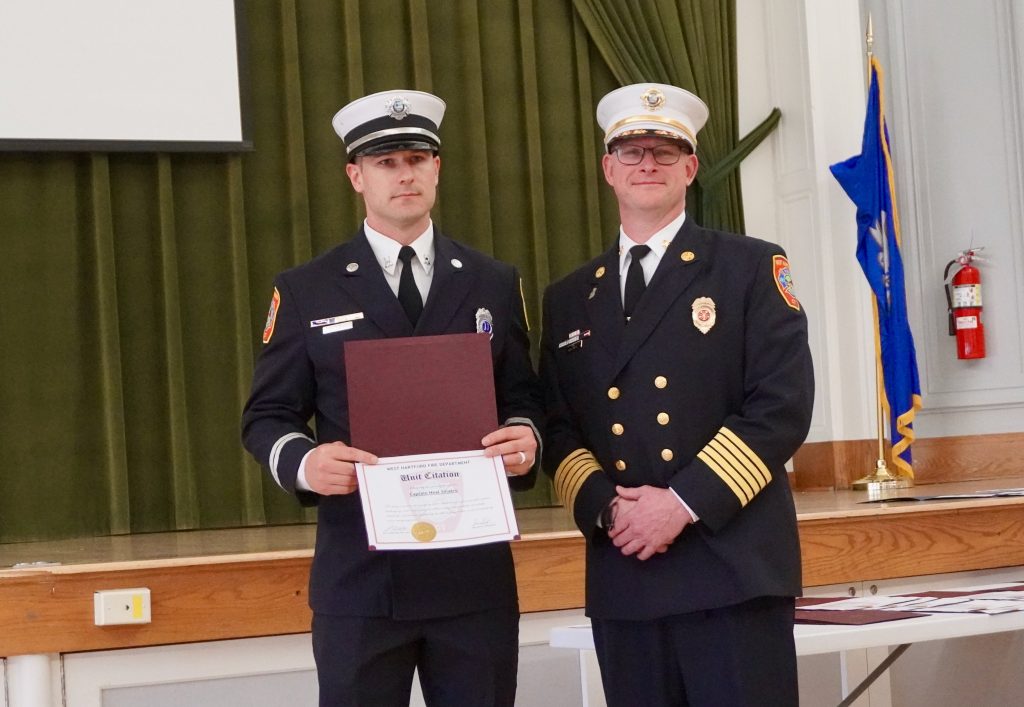 Lt. Neal Sinatro was one of the recipients of a Unit Citation. West Hartford Fire Department Promotion and Awards Ceremony. May 2, 2022. Photo credit: Ronni Newton

One award given to department members that doesn’t involve actions take on what is likely one of the worst days is the Stork Award. The recipients – who have helped deliver healthy babies in the field during two incidents in 2019 and 2020 – include Lt. John Bigham, Lt. Robert Howe, Lt. Ryan Shea, Firefighter/Paramedic Matthew Traber, and Firefighter/Paramedic Victoire Will (currently deployed). 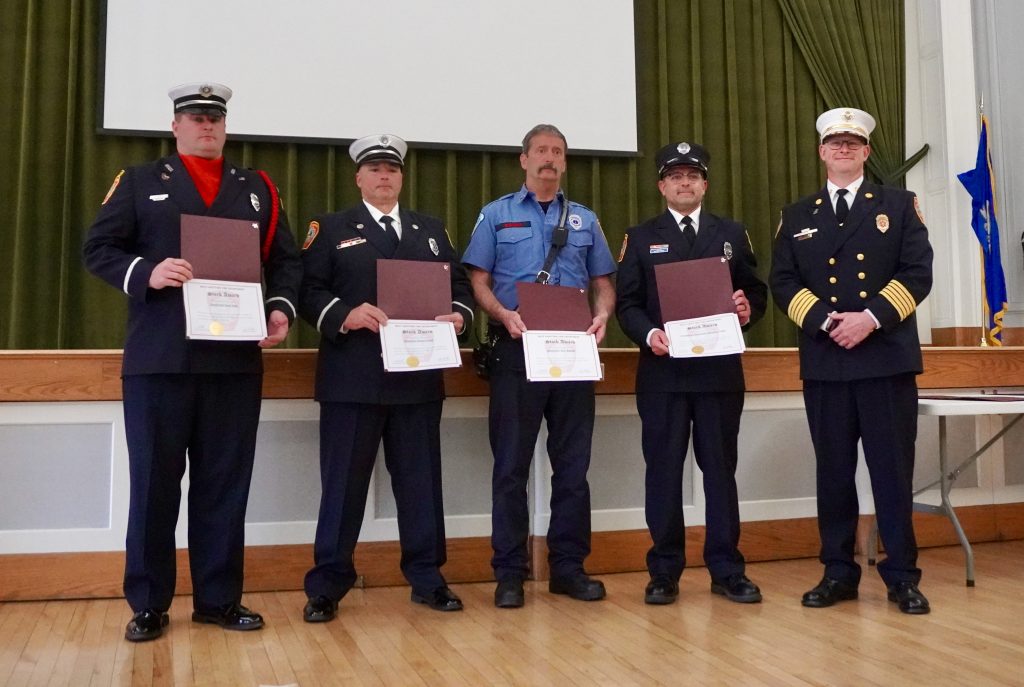 The final citation was the Community Risk Reduction Award, noting those who have prevented tragedy by lessening the risks in the community.

“In the last few years the challenge of community-based risk reduction took a new and unprecedented for with the COVID-19 pandemic, but the pandemic did not stop fires from occurring, accidents happening, and despite all the warnings and precautions the virus spread,” Smith said. Those receiving the Community Risk Reduction Award, who spent countless hours distributing PPE, educating the community on wearing masks, enforcing executive orders, and more, “distinguished themselves by not just stepping out of the box, but by leaping far and beyond it, to prevent this unprecedented emergency from increasing in its scope and severity.” 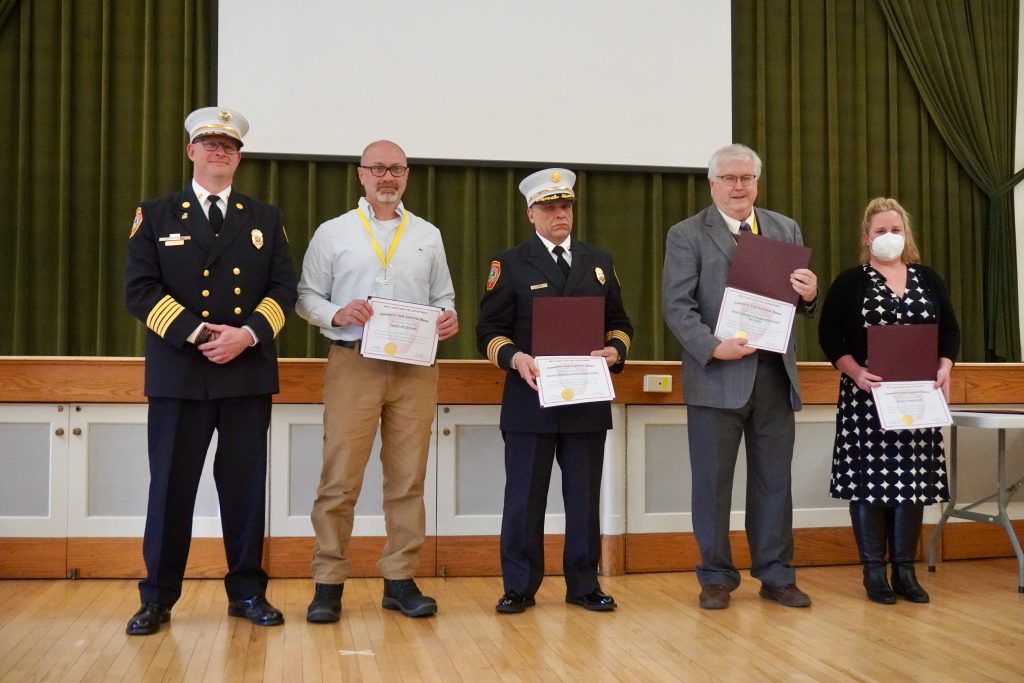 Recipients were Fire Marshal Robert Grimaldi, Deputy Fire Marshal Marsha Adell, Deputy Emergency Manager Robert McCue (a former assistant police chief who stepped out of retirement, and Capt. Jeffrey Dufresne. The award was also given to someone outside of the department, for the first time ever, recognizing the work that West Hartford-Bloomfield Health District Director Aimee Krauss did in managing the COVID-19 pandemic as the “backbone of the public health response.” 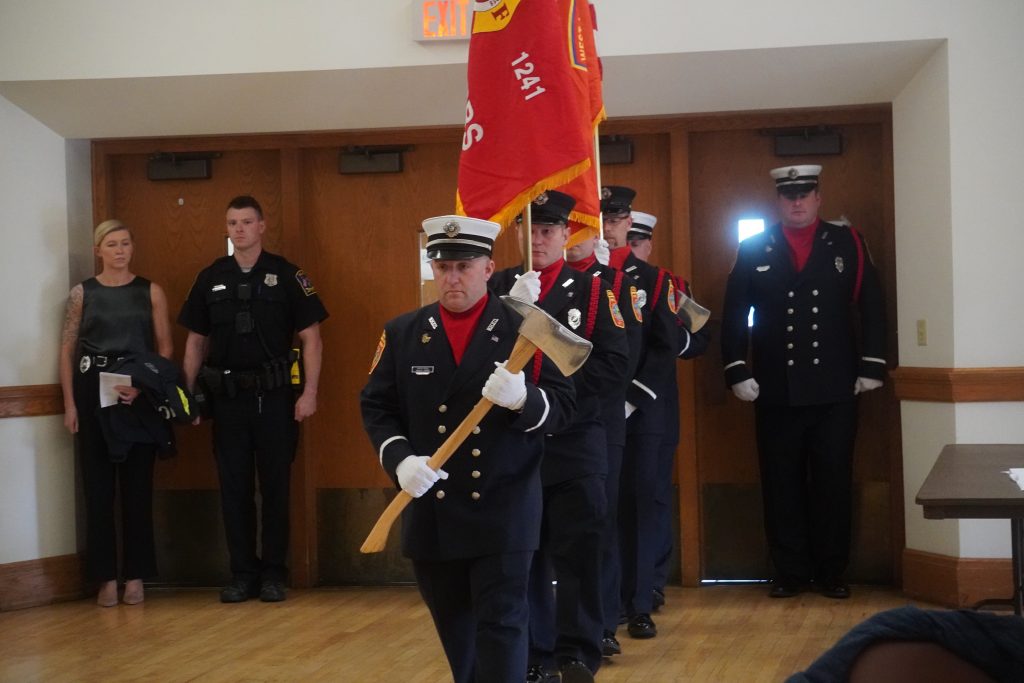