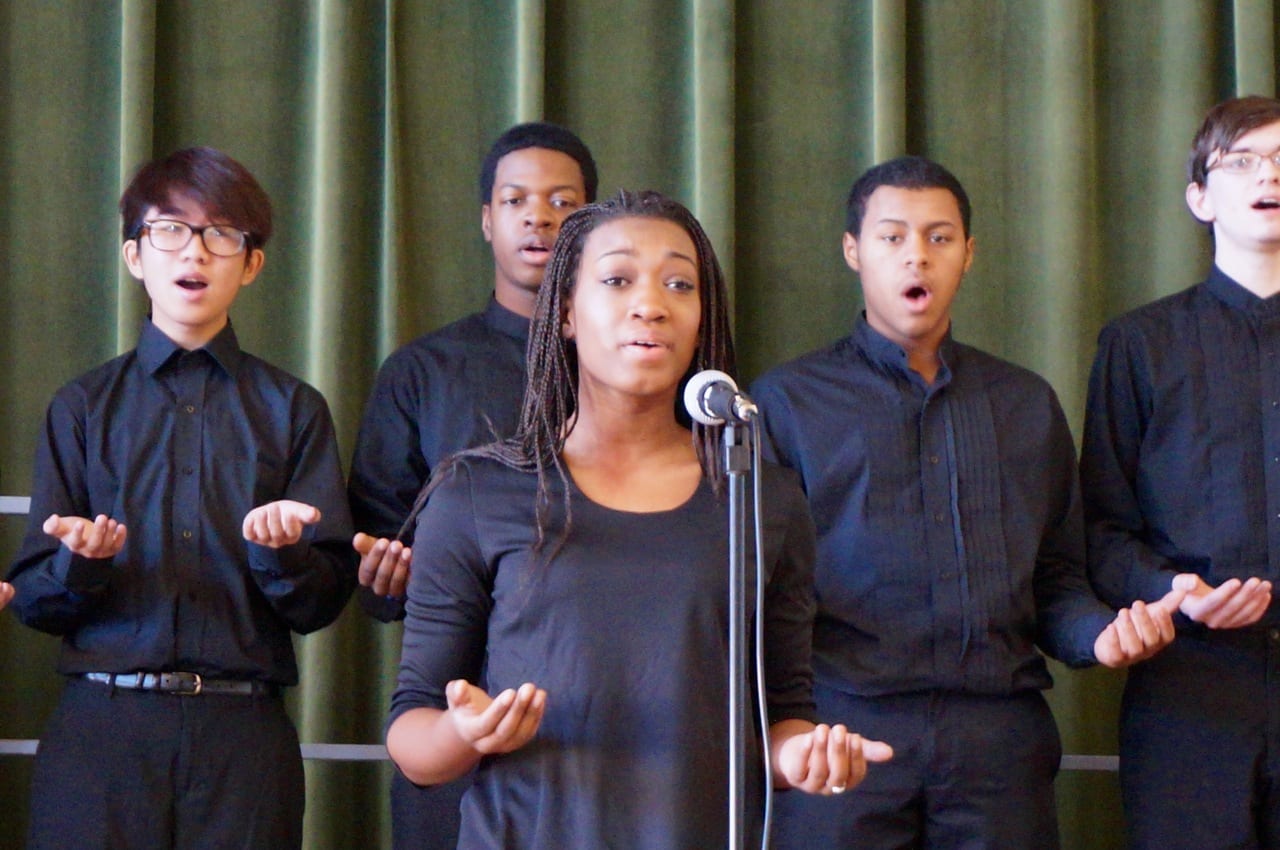 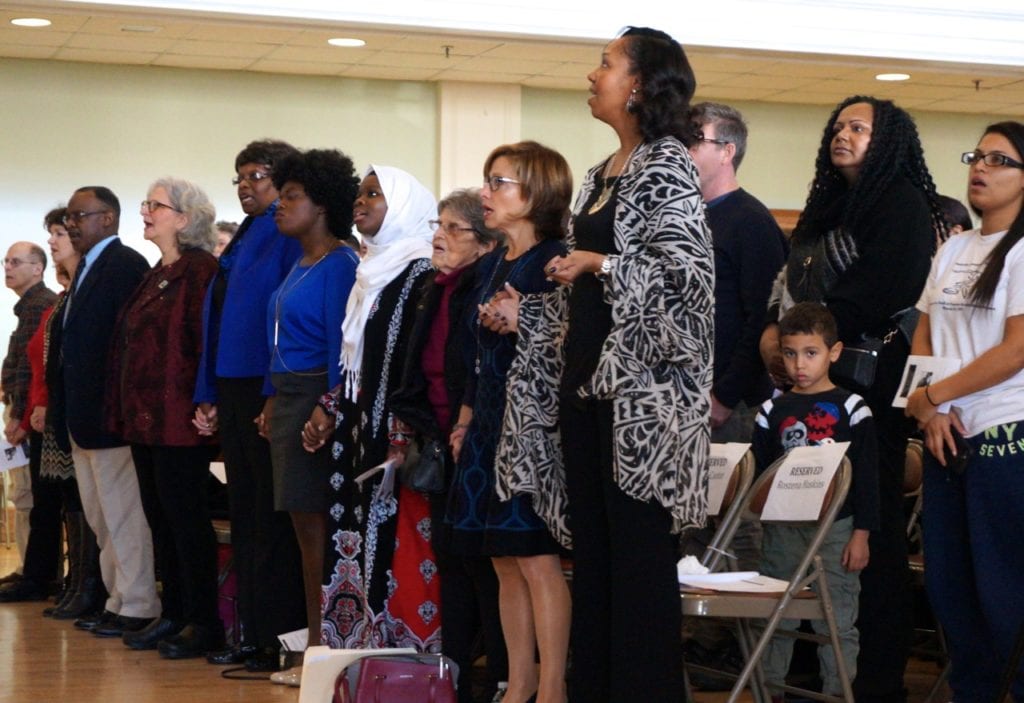 The vision and mission of Dr. Martin Luther King Jr. took center stage at West Hartford Town Hall Monday morning as the community came together for the 21st annual celebration of the esteemed civil rights leader.

Reading a quotation from a column that Martin Luther King Jr. wrote in 1958 about the spread of hate, Cantor drew parallels to the world today. “We cannot tolerate hate. There’s not just one target of prejudice, bigotry, or at the worst – hatred.  We need to be aware of the seeds and stop them from growing,” she said.

West Hartford is “welcoming, caring, compassionate, empathetic,” Cantor said, welcoming to all people. “This is a serious commitment of this community.”

Roszena Haskins, who serves as director of Continuing Education and Diversity for West Hartford Public Schools, served as emcee for the program.

Haskins shared some of her own recollections of of Martin Luther King, and urged the community to “recommit our hearts, lives, spirits, and actions to promote diversity, human rights and civil rights, and equality.”

Martin Luther King Jr. is the only non-president to have a national holiday as well as a memorial on the National Mall in Washington, DC., Haskins said. It’s deserving because he “was the trifecta of courage to stand up, rise up against social injustice.” He spoke the truth and had unconditional love for all mankind, she said.

King’s powerful messages still resonate, Haskins said, and the impact will continue. “We have witnessed great strides in access an opportunity,” she said, but we still have ways to go. She urged all to do some small part to increase inclusion, practice random acts of kindness, engage in service to community, and use voices to spread messages of social justice advocacy.”

“Turn to your neighbor and say, ‘You matter,'” said Haskins. The audience followed her lead and did just that.

Pastor Fred L. Ward III of Congregation Church of Naugatuck gave the invocation, but did more that just passively offer a prayer. He taught the audience a prayer that is useful every day. Standing in front of the room Ward demonstrated – and the audience followed – as he reached up for love, embraced it, and then extended it to others and rested in it.

Student speakers are traditionally one of the highlights of West Hartford’s Martin Luther King Day celebration, and this year’s chosen presenters provided powerful messages about how King influenced their lives.

Madino Hassan of Conard High School moved to the United States from Africa with her family 12 years ago, she said, for the endless opportunity and quality education.

Now proudly attired in a colorful hijab, Hassan said she did not always feel comfortable being dressed in that way. She credited King’s teaching about honoring everyone’s differences with her presence in the room.

Citing King’s “Mountaintop speech,” Hassan said if he had not given the speech she “would not be here today” and his words allow her to appreciate her own identity as part of the diverse population that makes this country great..

“We should all just love each other for who we are because that’s what King wanted,” said Hassan. Together we can be “the best we can.”

Hall High School speaker Amina Symone Lampkin evoked King’s message in a letter from Birmingham jail as she spoke about a nonviolent approach to racism.

“In Dr. King’s time and today, people feel like they’re fighting to survive. Cultures and inherent rights were and continue to be snatched from people and oppression has come to define them,” Lampkin said.

Blacks, and other under-represented groups, have been asked to wait because change takes time, and are still waiting – unfortunately leading some to resort to violence.

“Violence promises immediate and short term gratification in the forms of domination and power. Violence within a movement, even by one person, often damages the reputation of the movement. An entire group of people will be unfairly criticized for the actions of one. In addition to the firestorm placed upon the movement, those feelings of power and domination are a false reality. While violence will defeat one or a few, it will never be powerful enough to overcome an institution of oppression,” said Lampkin.

There are many more avenues to issue a call to action today, said Lampkin, which can be used to further King’s methods of achieving justice. “We cannot let our fears of tomorrow determine our actions of today. While American political discourse appears to be turning away from individual rights, you and I should feel emboldened after today’s celebration of the very qualities that have truly made America great. There is no day like today to stand up for what you know to be right and just,” said Lampkin.

“Do not fall victim to ‘neutrality.’ Neutrality and silence can only help the oppressor. It’s time we become victors, rather than victims, of our circumstances and progress toward equality and freedom for all.”

Natalie Mendes of the West Hartford African American Social & Cultural Organization had the privilege of introducing the two keynote speakers, Victoria Christgau and Pastor James A. Lane, Jr. of the Connecticut Center for Nonviolence.

Sharing the podium, and taking turns speaking, Christgau and Lane engaged the audience in a responsive reading and interpretation of Martin Luther King Jr.’s “Six Principles of Nonviolence”:

Women’s marches which will be taking place next weekend, including the large march planned for Saturday in Washington, DC, have adopted King’s principles of nonviolence, Christgau said.

“We’re convinced that Martin Luther King is alive and well. You may not see his body but his spirit is forever here,” Christgau said.

Lane said that if King were alive today he would tell people to refrain from getting too lazy with the seeds that were planted. “Celebrate the accomplishments and change, remembering where we come from  … always remembering that hate has caused a lot of problems in our world but has never solved one.”

Music was also a key element of the Martin Luther King Day celebration. Hall High School’s Jazz Combo provided a prelude, and Sedgwick Middle School’s select choir, “Sounds,” provided an interlude with a performance of “I Dream a World” and “The Storm is Passing Over.”

Conard High School’s “Voices of the World” choir closed the program with the South African peace hymn “Ukuthula” and “We Are the World.”

As is the custom, the Conard choir ended the celebration by leading a touching and beautiful group singing of “We Shall Overcome,” bringing many in the audience to tears.

Many members of the audience lingered after the program, viewing artwork and essays by elementary students from throughout West Hartford Public Schools that filled the hallways of Town Hall. 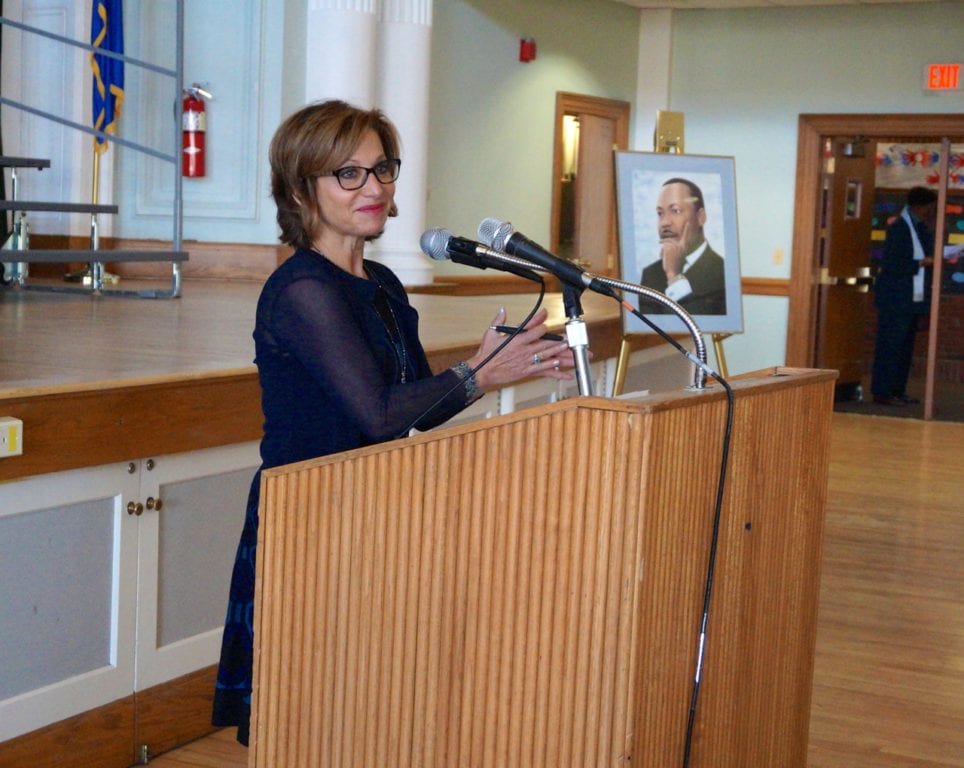 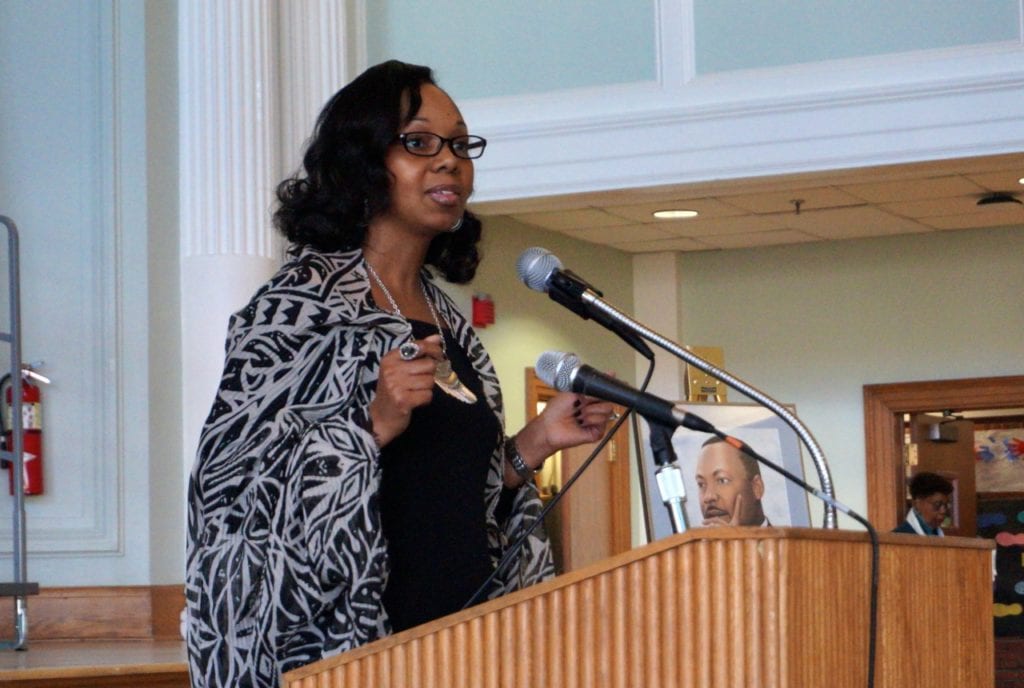 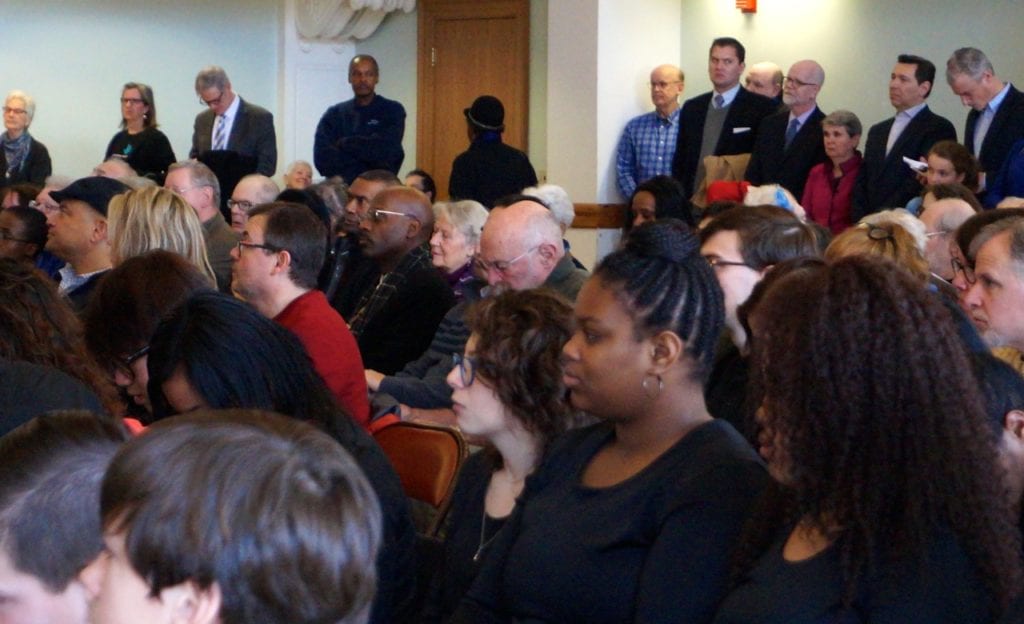 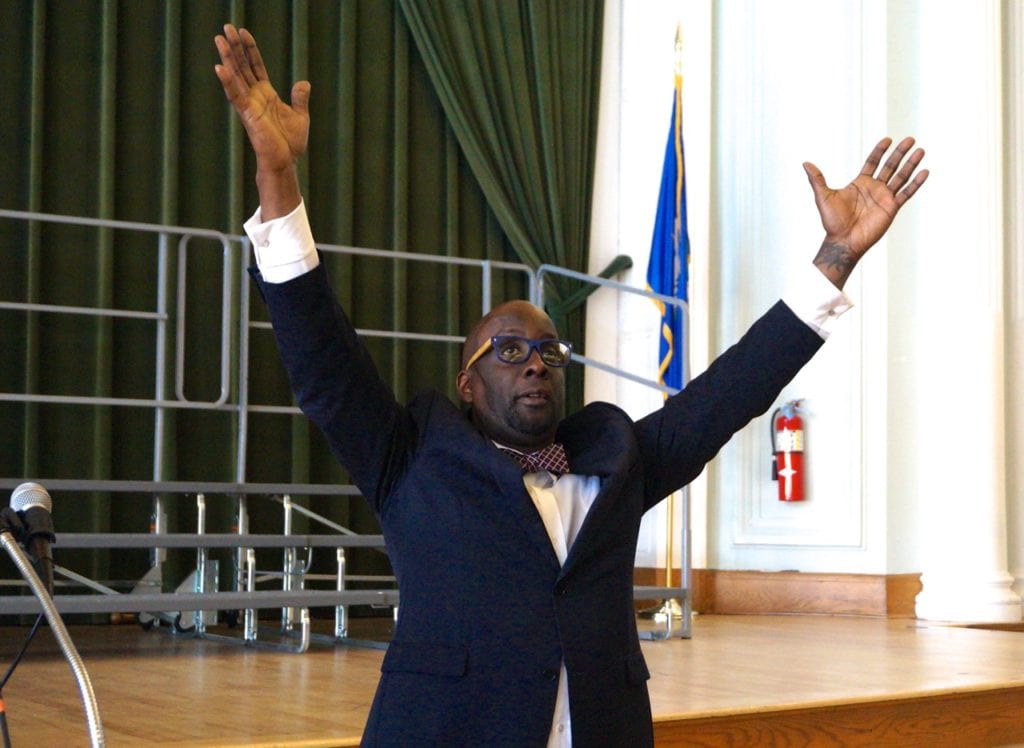 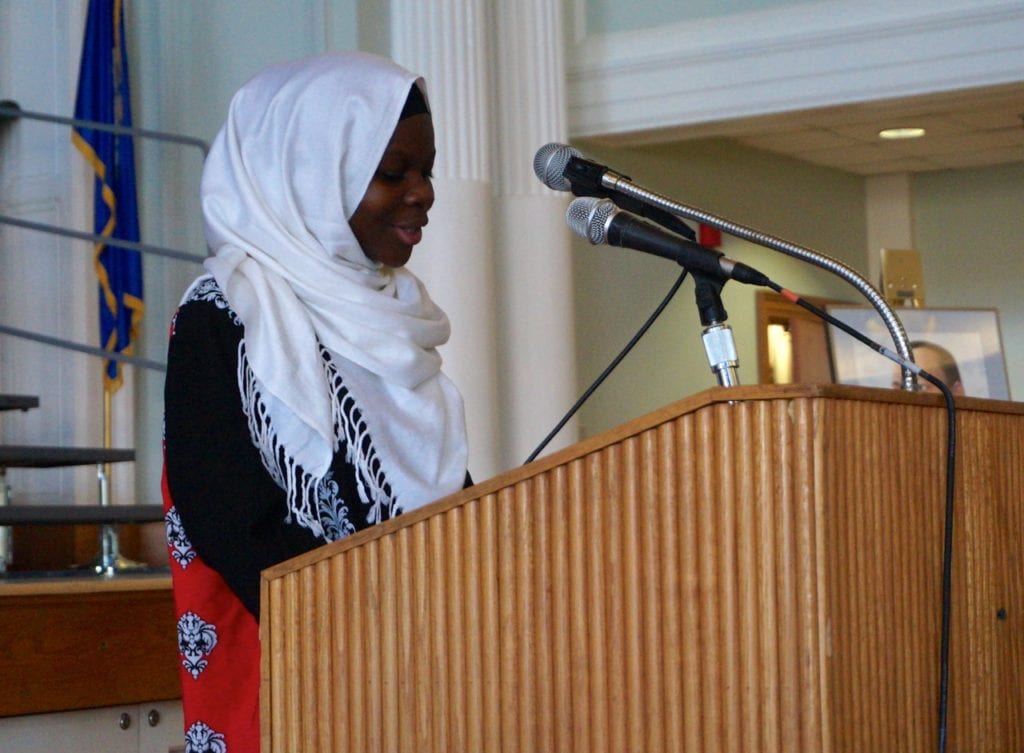 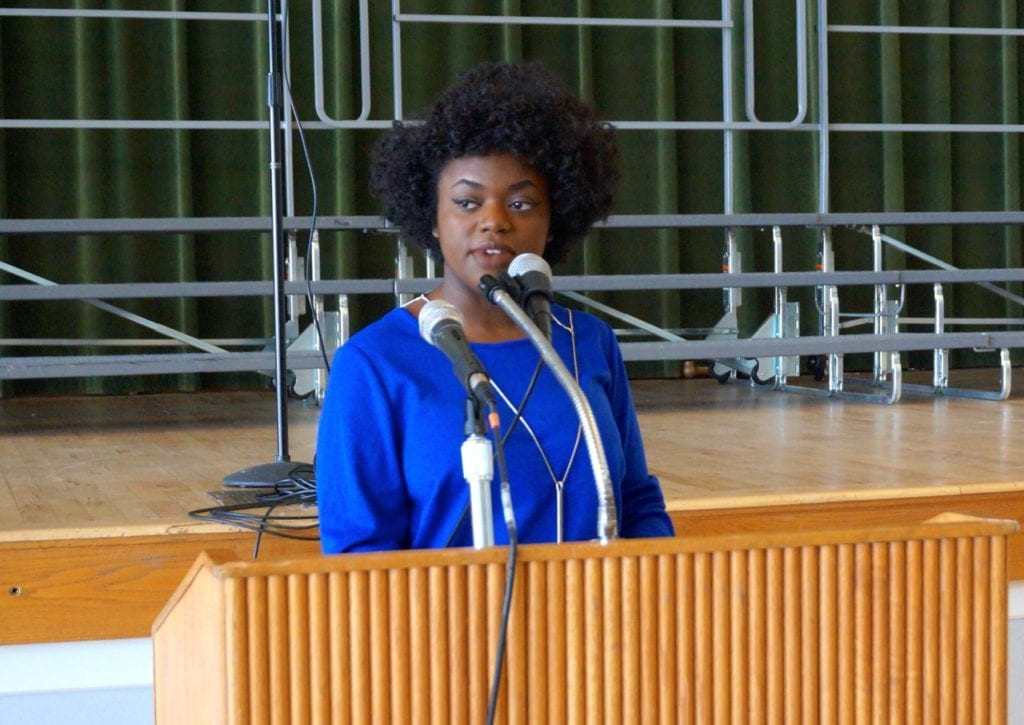 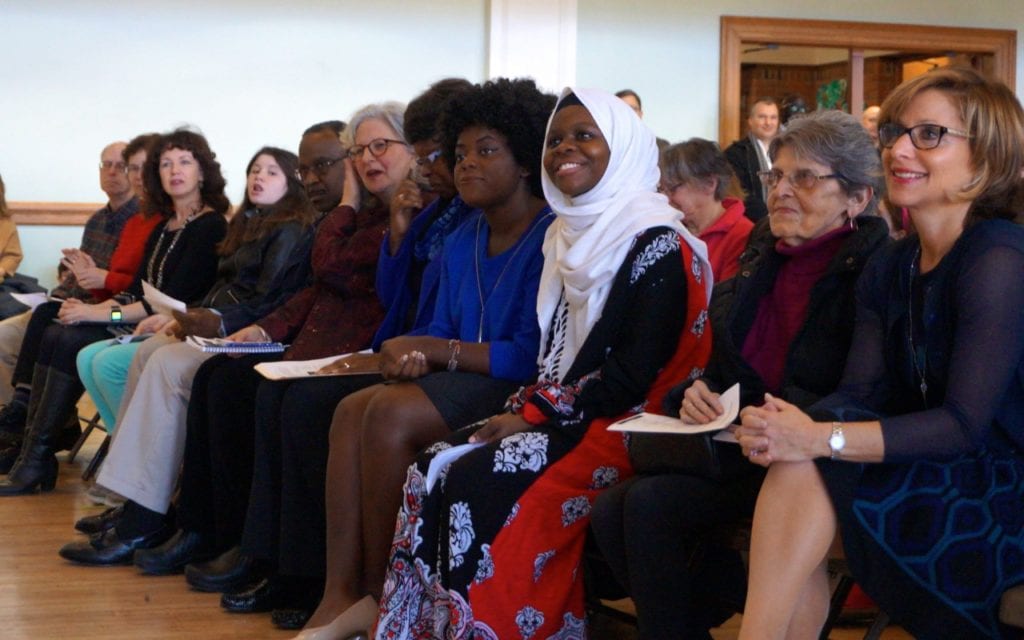 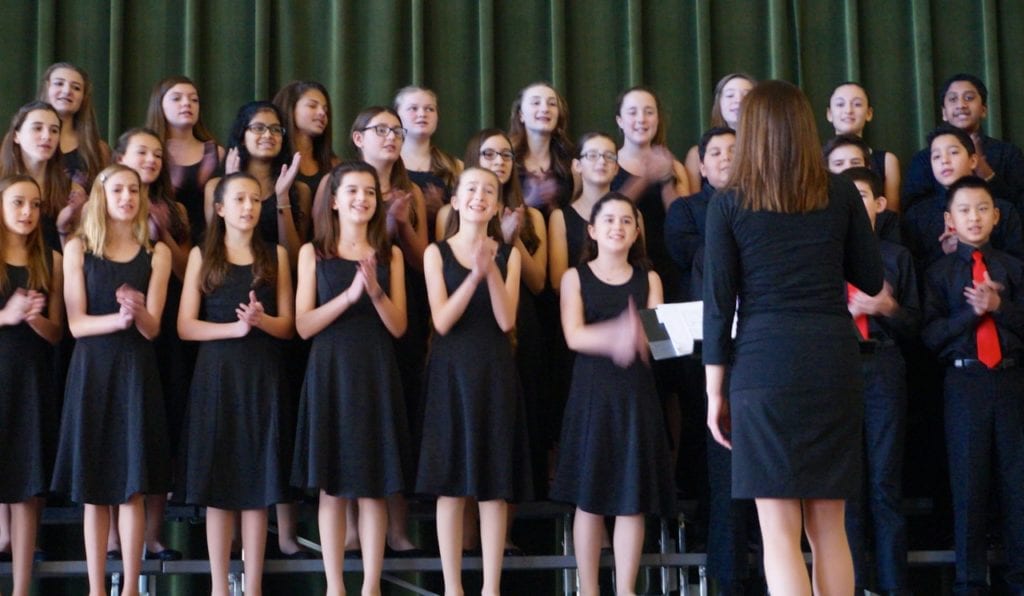 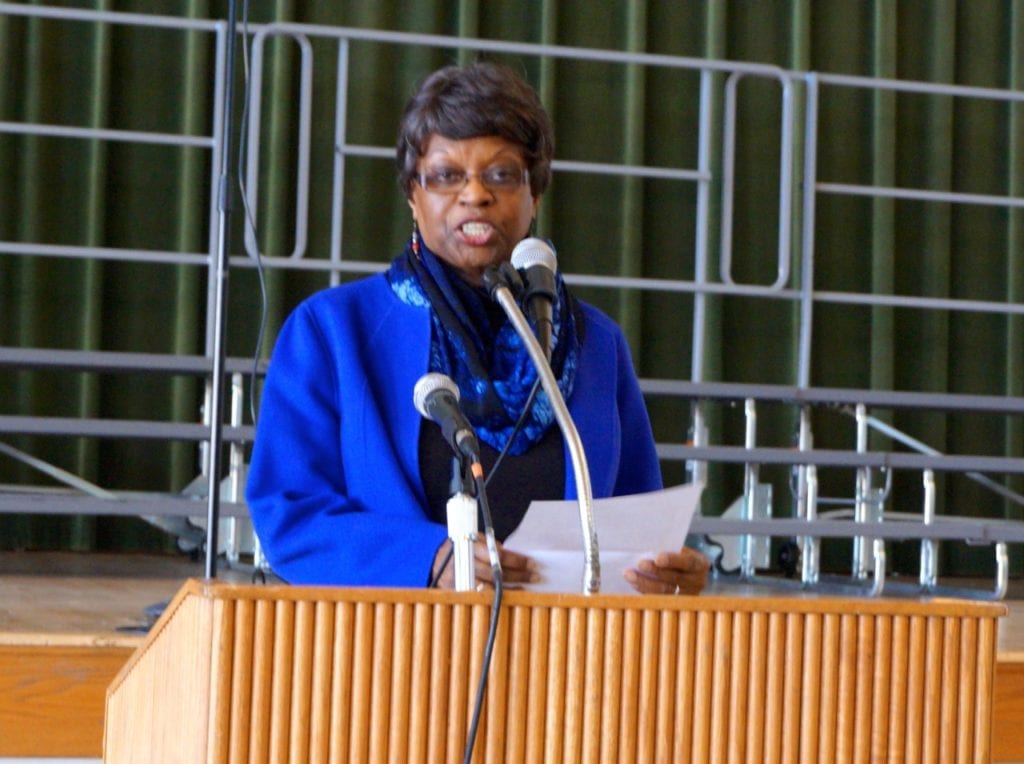 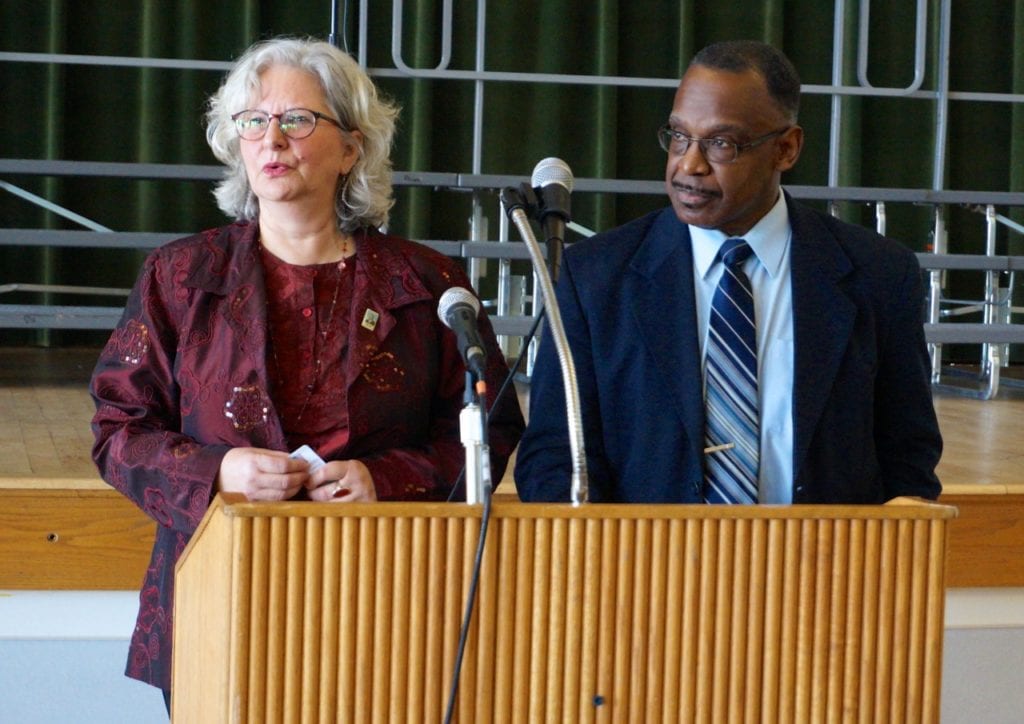 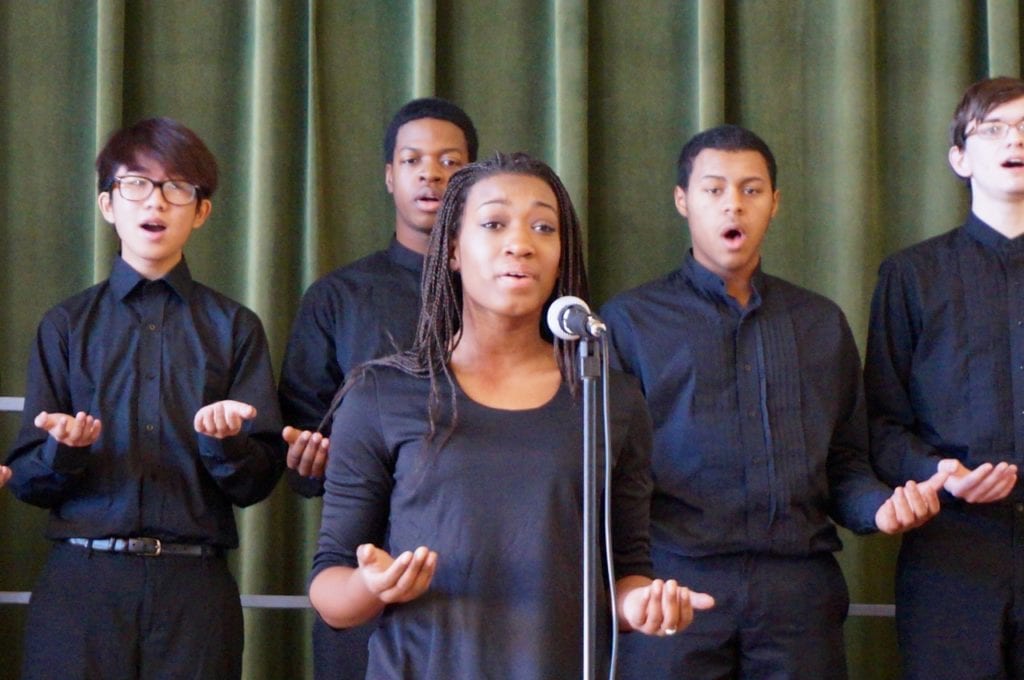 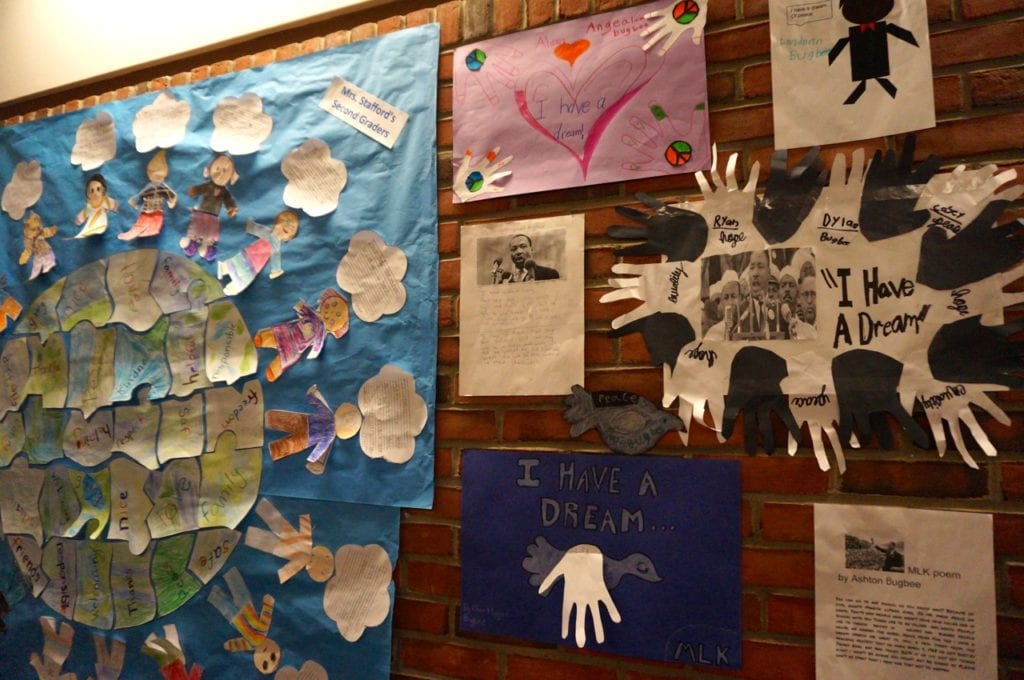 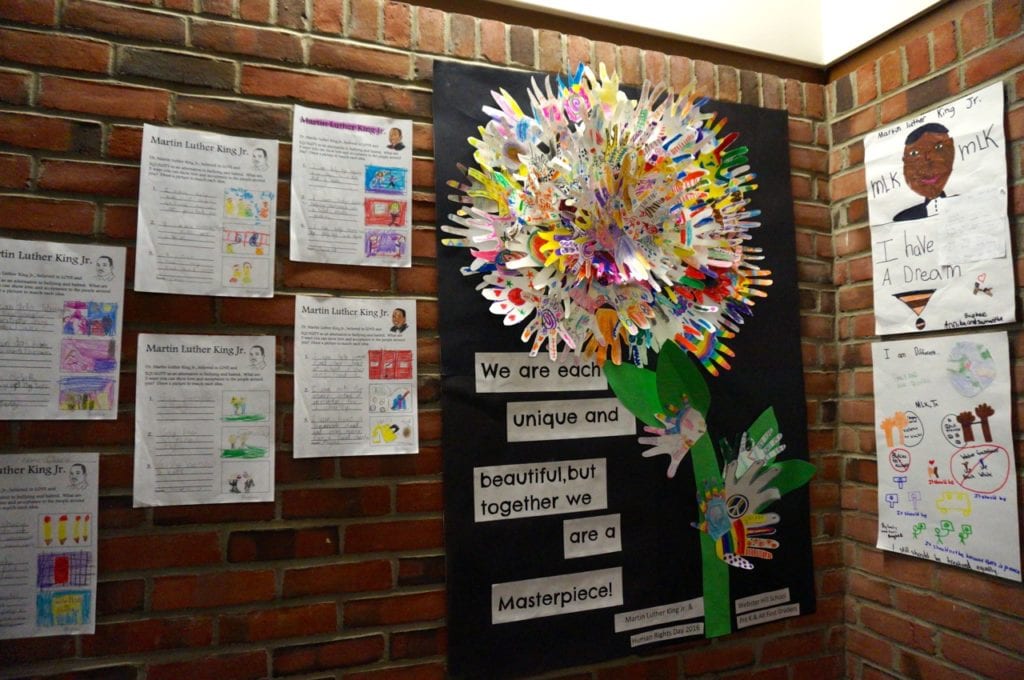 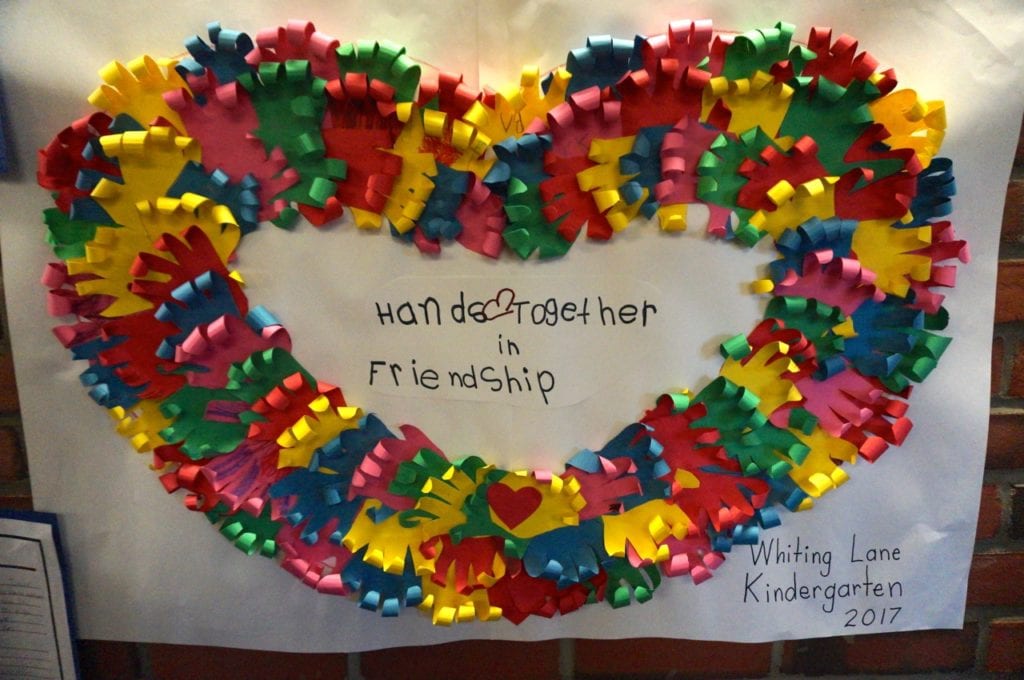 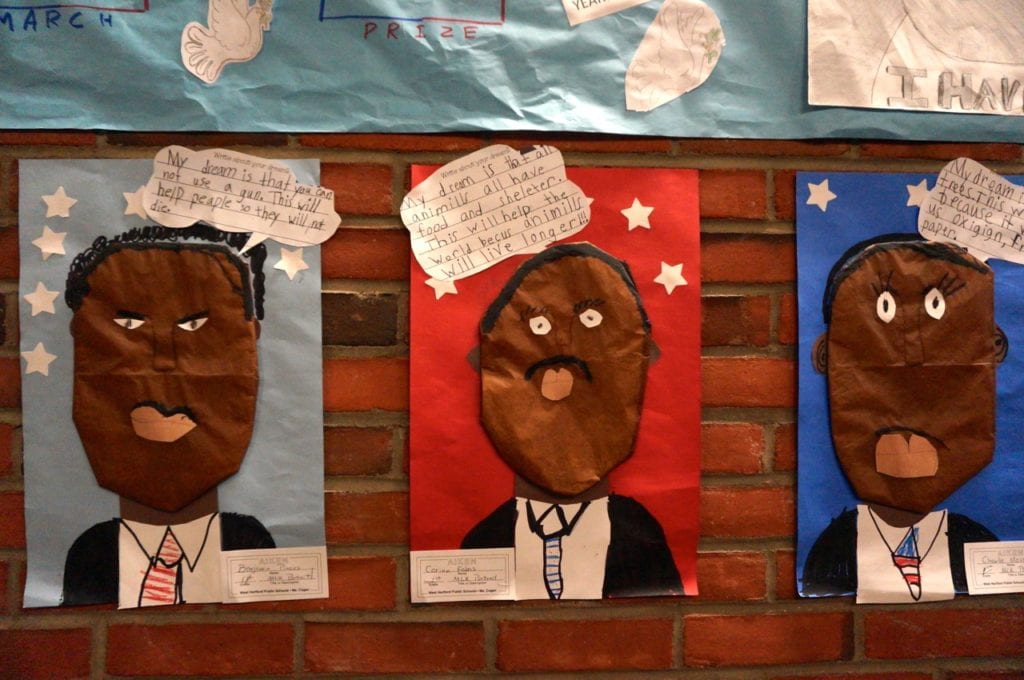