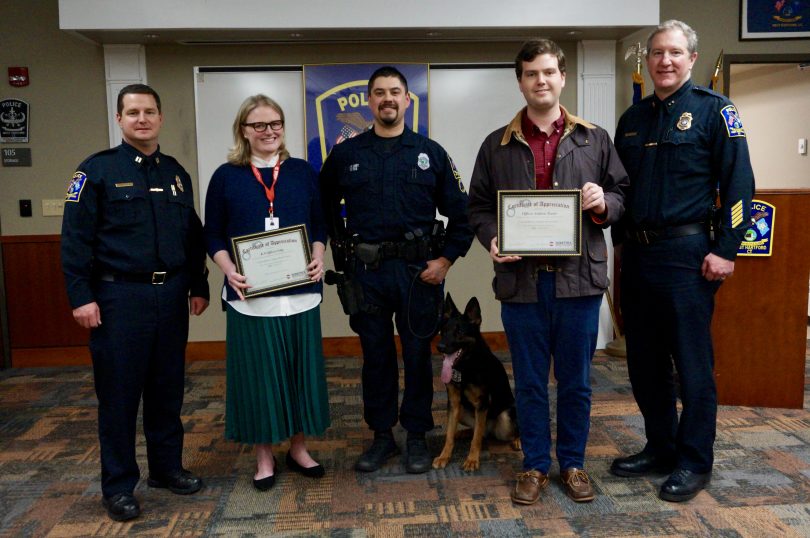 Representatives of Sonitrol visited the West Hartford Police Department on Thursday to present certificates of appreciation to Off. Andrew Teeter and K-9 Islay for their role in apprehending a man who had broken into a Hartford elementary school. 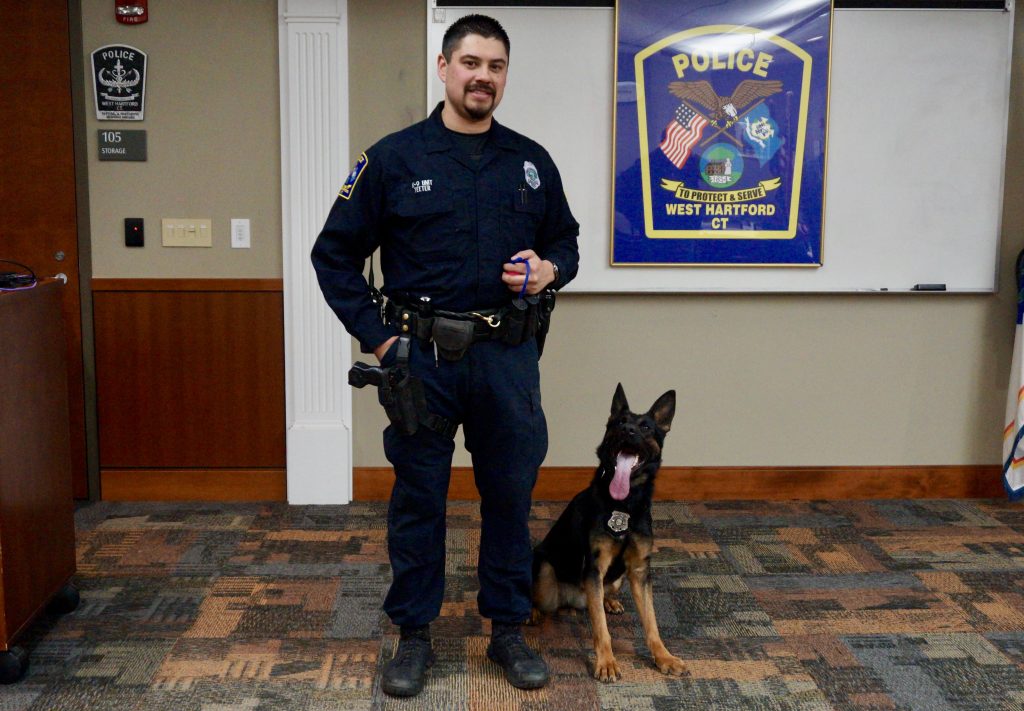 A West Hartford Police officer and K-9 were recognized Thursday afternoon for their role in successfully apprehending a suspect who had broken into Simpson-Waverly School in Hartford and were provided certificates of appreciation and a donation to the K-9 program by the security company. 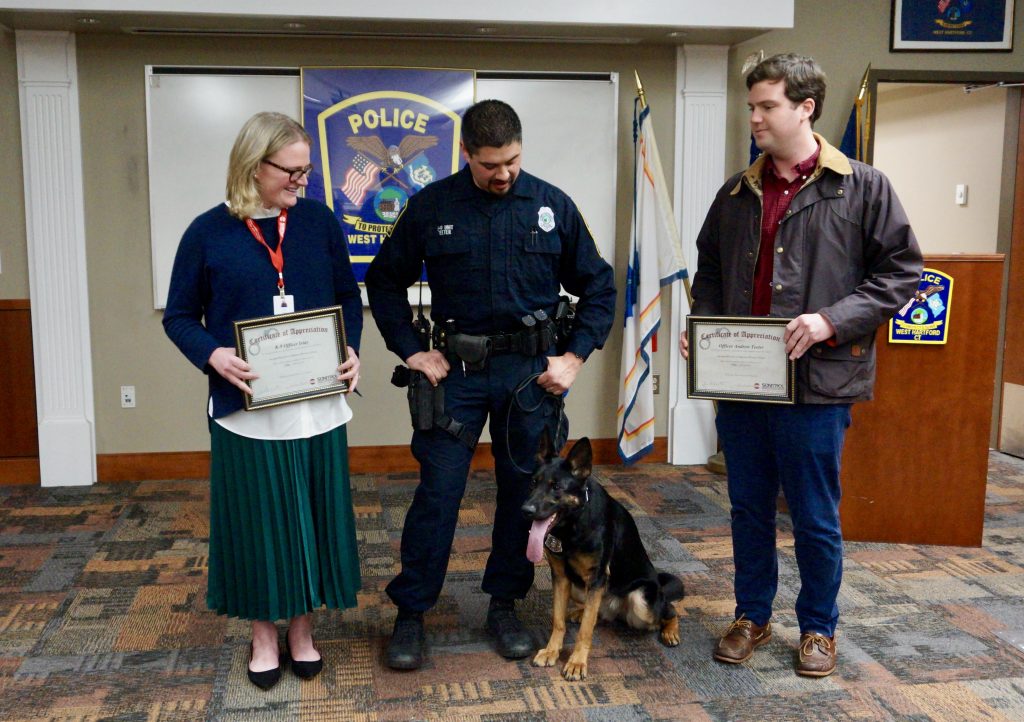 “We really appreciate everything you guys do but especially your K-9 unit because they’re always the first ones to go in and they make sure the rest of the officers come home safe to their families every night,” said Sierra Curtiss, director of communications for the family-owned security company Sonitrol New England. “We love to show our support for men and women in blue any way we can.”

“We couldn’t do what we do without you guys,” James Curtiss, Sonitrol’s director of business development added.

K-9 teams serve as a regional resource, and provide mutual aid to police departments throughout the area.

Officer Andrew Teeter said he is happy to help whenever he can. “Have dog will travel,” he said. “A big chunk of the work we do is out of town and this is a limited resource. Capitol region, statewide, we share resources in these dogs. They’re a very valuable asset, an expensive asset, and it’s good that we can help anybody out.”

In this particular incident, on Oct. 17, 2019, Hartford Police said multiple alarms went off inside Simpson-Waverly School, and the Sonitrol operator heard banging noises and voices, and dispatched police.

Hartford Police, along with Teeter and Islay, responded to the scene, found signs of forced entry, and the K-9 team entered the premises.

“They successfully located the suspect and took him into custody. As a result, Off. Teeter and K-9 Off. Islay were able to mitigate any further damage to the property and ensure the safety of the responding officers,” Hartford Police said.

The suspect was charged with burglary, and further investigation indicated his involvement in other burglaries in the North End of Hartford, to which he ultimately confessed, police said. 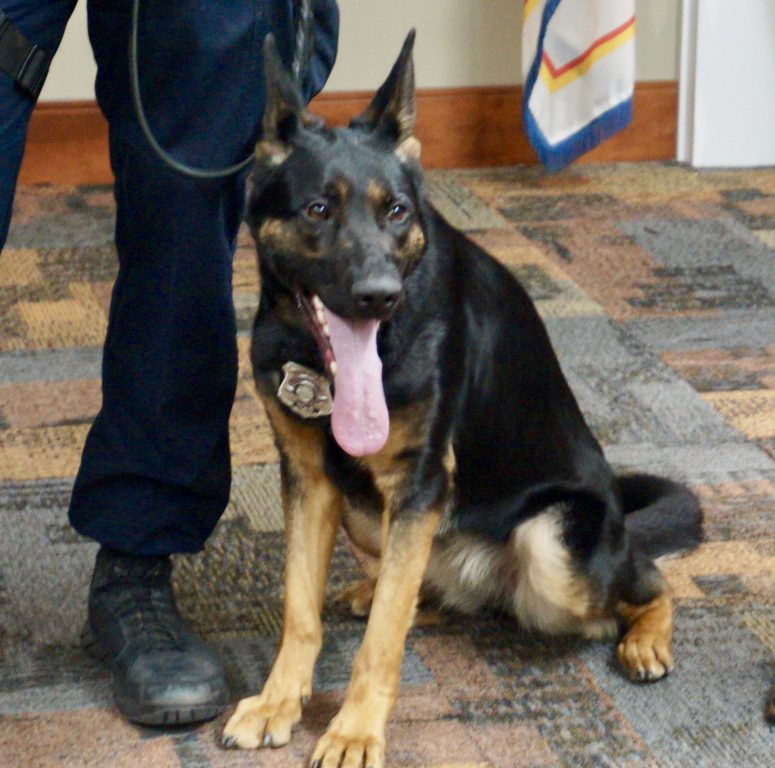 K-9 Islay posing for a photo next to her handler, Off. Andrew Teeter. Photo credit: Ronni Newton

“Sitz,” Teeter said to K-9 Islay, as she responded to the German command for “sit” and dutifully posed for a photo at the ceremony. Most K-9s are trained to respond to commands in German.

Mark Tedeschi, a retired officer from the Hartford Police Department who is now the public safety liaison for Sonitrol, said that the company will be donating training gear for the West Hartford K-9s.

James Curtiss said his family founded Sonitrol in 1945 in Hartford, and they are now headquartered in Rocky Hill and have multiple locations in New England where they are the largest privately-owned security company. “We specialize primarily in school systems and big warehouses and large commercial facilities,” he said.

Sonitrol has committed to donating an unspecified amount of money for training gear for the West Hartford K-9s and their handlers, including arm guards. “Our job is to notify the police when someone’s in the building, and obviously the safety of the police officer is of utmost importance to us. They send the dogs in first and want to make sure the whole situation is clear and as safe as possible for them,” James Curtiss said.

Sonitrol was monitoring the situation to which Teeter and Islay responded and for which they were recognized.

“Any time we have an apprehension, when we actually catch a bad guy in cooperation with the police department, we like to go out and present the officers with certificates of appreciation,” Sierra Curtiss said. Last week the Hartford Police Department officers involved in the case were recognized, she said, but since Teeter and Islay were also a key part of the apprehension, they also came to West Hartford to honor them. “They were the first ones to go into this Hartford school.”

In a statement, Sonitrol noted their appreciation for the assistance of the West Hartford Police Department, with which they have had a relationship for nearly 50 years. “It is our pleasure to recognize these officers and show our support for local law enforcement and the sacrifices they make every day.” 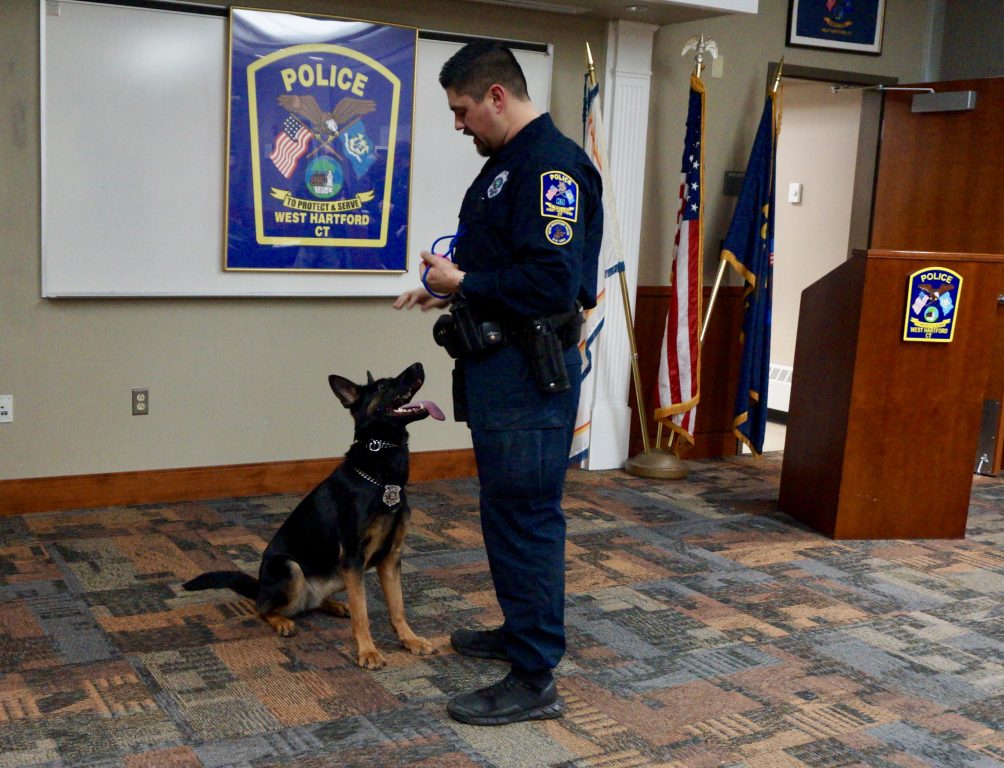 Certificates of appreciation, along with a donation, were provided by Sonitrol New England. Photo credit: Ronni Newton