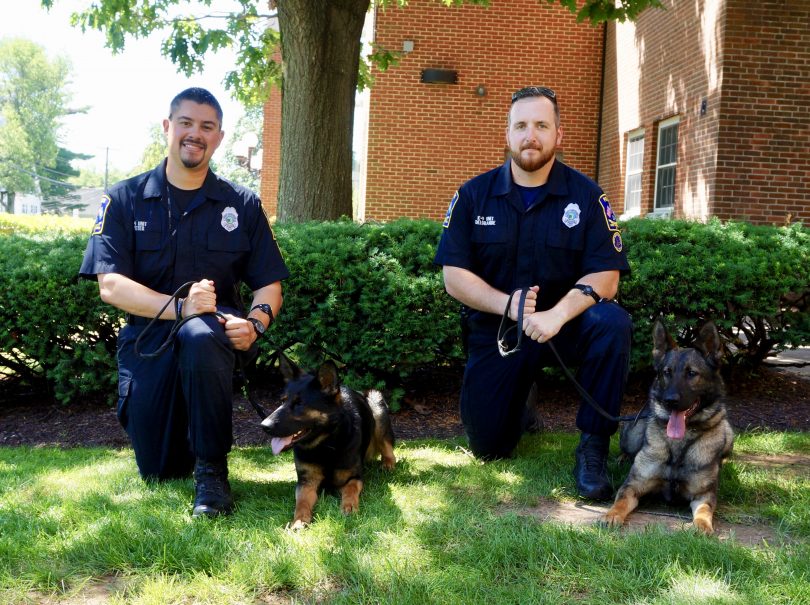 Off. Andrew Teeter (left) with Islay, and Off. Brian Delgrande with Lotti. Photo credit: Ronni Newton

The two newest additions to the West Hartford Police Department are furry and fierce, and both are set to enter the police force on July 3 after K-9 Unit training is complete. 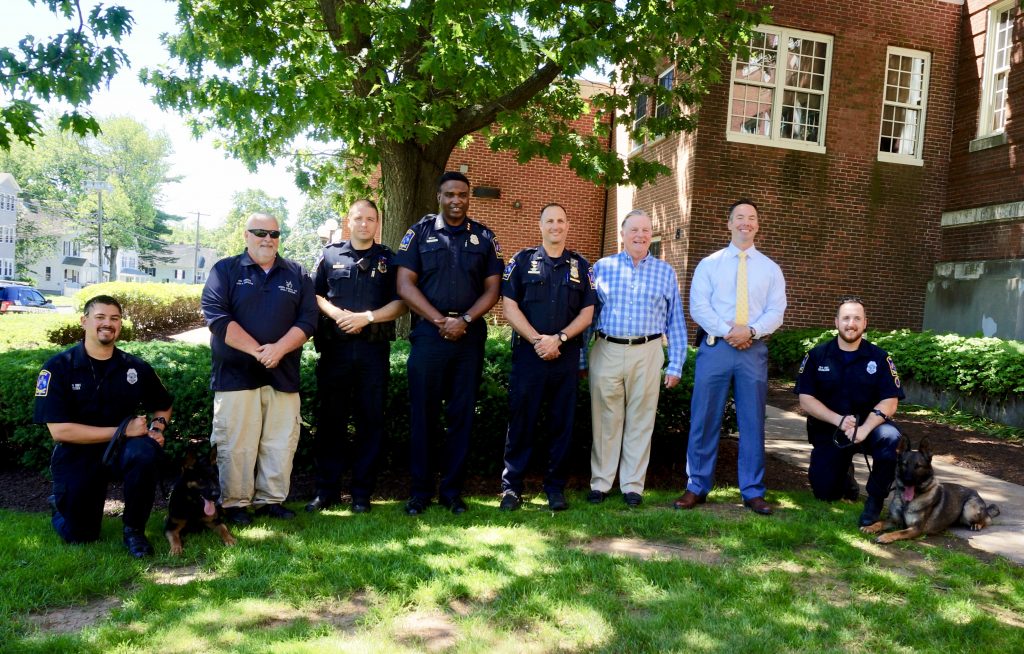 On Wednesday morning on the front lawn of the West Hartford Police Department, two dogs showed off their tricks in at a press conference held in their honor. These weren’t just regular dogs, though, but German Shepherds being trained for West Hartford Police’s K-9 Unit, obtained through a gift from a generous benefactor. 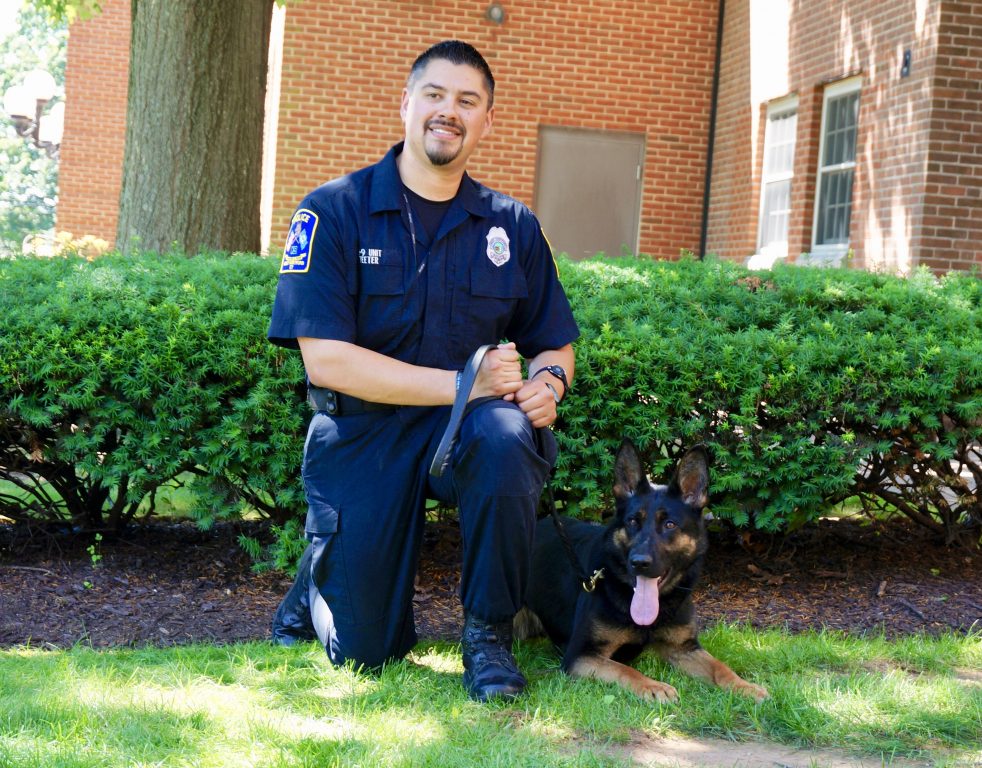 Lotti, a 3-year-old, and Islay, a 16-month-old, both from the Czech Republic, have already been through 10 weeks of K-9 training with their respective handlers, Off. Brian Delgrande and Off. Andrew Teeter.

Lotti and Islay, and their handlers, have been working with Bill Scribner of Renbar Kennels, a retired New Milford Police officer and trainer with the North American Police Working Dog Association. Scribner said he has 41 years of experience and has trained thousands of dogs, and said Lotti and Islay will receive their certification on July 3, 2019, and then start work for the West Hartford Police Department.

The department has been temporarily without a dog and handler on active duty. K-9 Jett retired in January 2018 when his handler, Sgt. Tommy Lazure, was promoted. The team of Off. Nick Roman and K-9 Axel have been out while recovering from an injury. 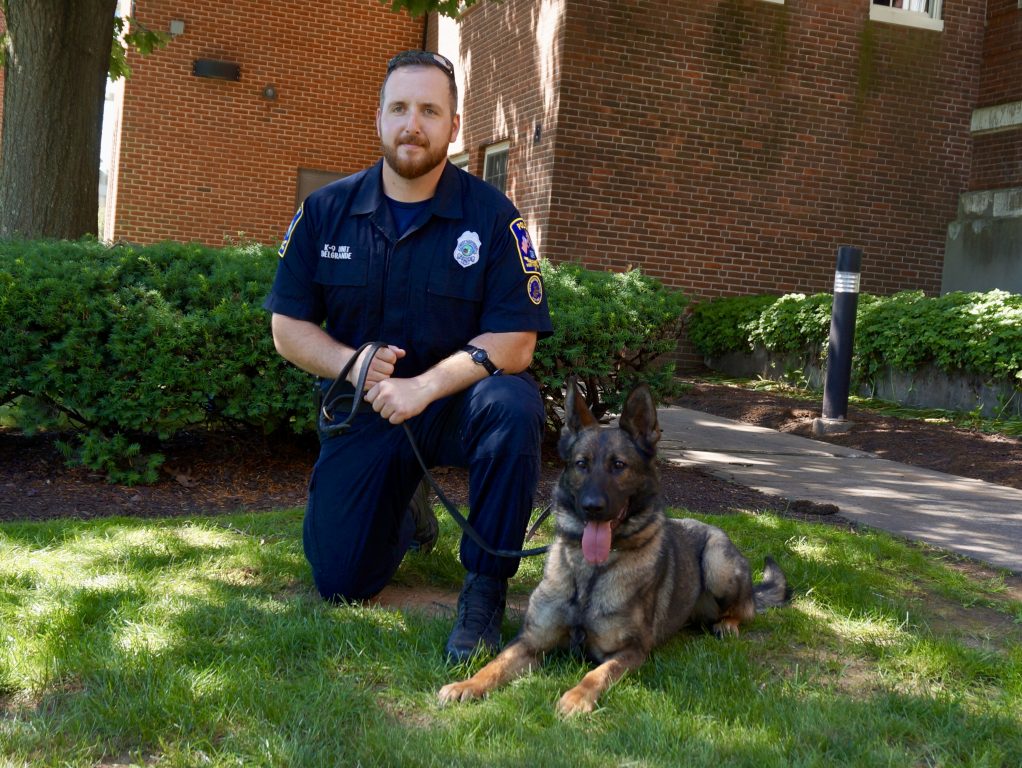 Jett did temporarily return to work with Lazure handling him even though he is a supervisor, but shortly thereafter was retired again after a cancer diagnosis. Lazure said Jett, who was very popular in the community and received many awards, is responding well to treatment.

Roman and Axel are expected to return to work this fall.

“Our goal is to have three [teams], to cover all shifts,” Chief Vernon Riddick said. “The timing couldn’t have been better,” he said, when he learned that Bill and Eva Gurley, longtime West Hartford residents who live a portion of the year in Florida, offered to help out the department’s K-9 unit with a donation.

“We have tended to support a number of causes, among them a number of organizations that care and support animals,” said Gurley, who attended Wednesday’s introduction of the dogs. He said that he and his wife are also major supporters the uniformed service – including the military.

Gurley said that his wife saw a TV news story about a K-9 who was shot and wasn’t wearing a vest and later died, and was moved to contact Lt. Chris Chappell of the West Hartford Police Department to offer to purchase ballistic vests for the town’s K-9s.

Chappell said he appreciated the offer, that West Hartford had vests, but that the problem was the department had no K-9s on active duty. He asked if the Gurleys would be interested in helping them get a dog.

After speaking with Chappell, and offering to fund a dog, Gurley said he learned that two were really needed. “If we’re good for one, we’re good for two,” Gurley said he responded. His generous donation has allowed West Hartford Police to obtain the two dogs, and have the dogs and their handlers go through training at the same time.

“It’s an excellent example of a public/private partnership,” Riddick said.

“It feels good seeing the money we’ve committed go to a good cause,” Gurley said.

Gurley had not been involved in selecting the dogs, and had not even seen them until Wednesday. He said he preferred to let the experts do their jobs.

His wife, unfortunately, had to miss the demonstration to take their own dog to the vet.

Although the majority of police K-9s are male, both currently being trained for West Hartford are females, Scribner said. It’s typical to get the dogs from foreign countries, where they are bred to be intelligence dogs with a certain demeanor. 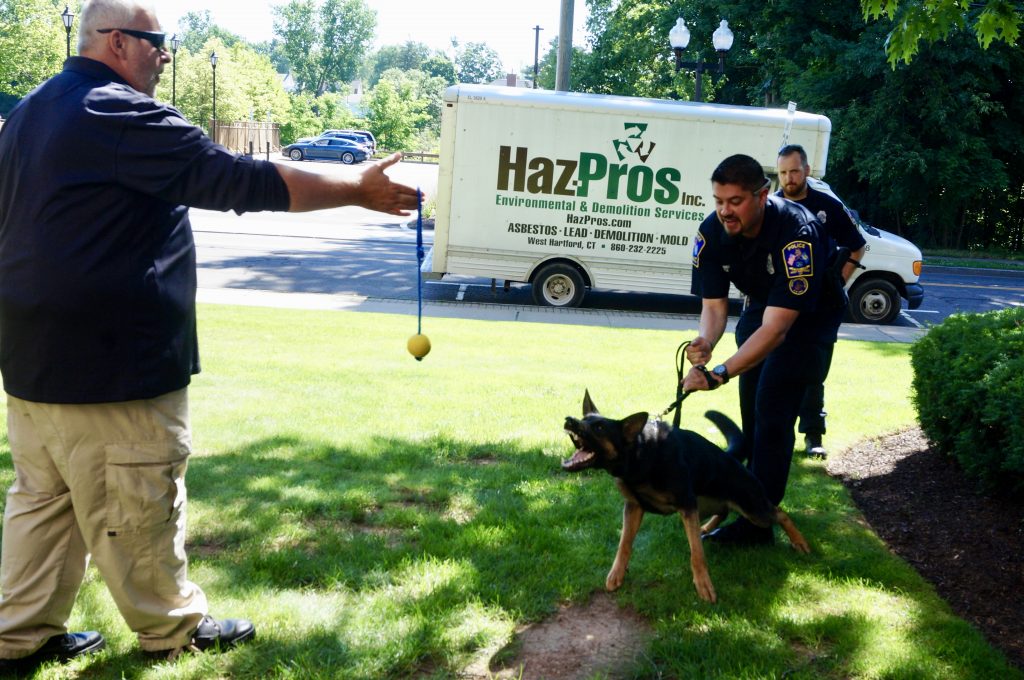 The dogs are trained using commands in German – the language used internationally for dog training. Service dogs all over the world are taught the same German commands, not only learning the words, but learning to recognize the voices of their handlers.

The officers gave a demonstration of some obedience commands the dogs have been learning. Islay showed off her sitting, staying, laying, and heeling skills, while Lotti showed how a dog would (successfully!) perform a drug search.

Not only are the dogs learning how to work as part of a police unit, but the handlers are learning how the dogs will respond to situations, so that they will end up working as a well-oiled team. Each dog is different, so it takes immense time and practice for the dog and handler to react to each other, Scribner said.

The demonstration that Teeter gave with Islay showed just that – after just 10 weeks of training, the 16-month-old boasted impressive listening skills and self-control in the situations that Teeter led her through. 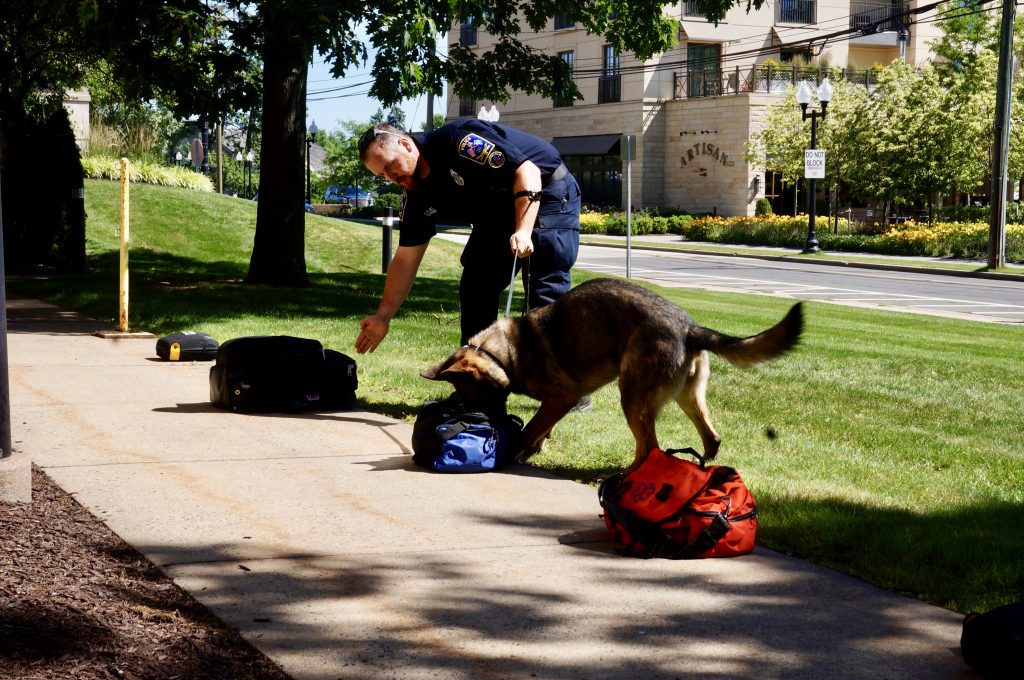 K-9 Lotti, under the guidance of Off. Brian Delgrande, sniffs out bags for narcotics. Photo credit: Ronni Newton

Delgrande and Lotti showed the same, as he directed her towards a series of backpacks, and she indicated which bag contained narcotics.

Teeter said that everything he thought he “ever knew as a pet owner was apparently wrong” after learning how to train these dogs. Most “domestic” pet owners would agree that Lotti and Islay’s “tricks” were nothing compared to the fetching their dogs are capable of.

Some of the narcotics that the dogs are trained to recognize and sniff out include cocaine, heroin, and methamphetamines. In this most recent round of K-9 training school, the dogs are not learning to sniff out marijuana, Scribner said, as it may be legalized in Connecticut in the near future.

A yellow ball is present for all training session. “For us the yellow ball is the most important thing in the entire world,” said Scribner. “This is the dog’s ‘paycheck,’ what really makes the dog work.”

The stronger the dog’s drive is for the ball, the harder they will work to complete the task and perform the behavior with the ball as their reward. The ball is used in association with the behavior, and after a while, they perform it without the ball.

The handlers use multiple means of positive (and some negative) reinforcement to teach the dogs the behaviors they want them to master. For example, positive reinforcers can include verbal affirmation, getting the ball to chew, and getting pets on the back. Negative reinforcers could be an aversive sound, a slight electric stimulation on the collar, or a verbal reprimand.

As for the home life of the dogs, they live with their handlers off the clock as well. 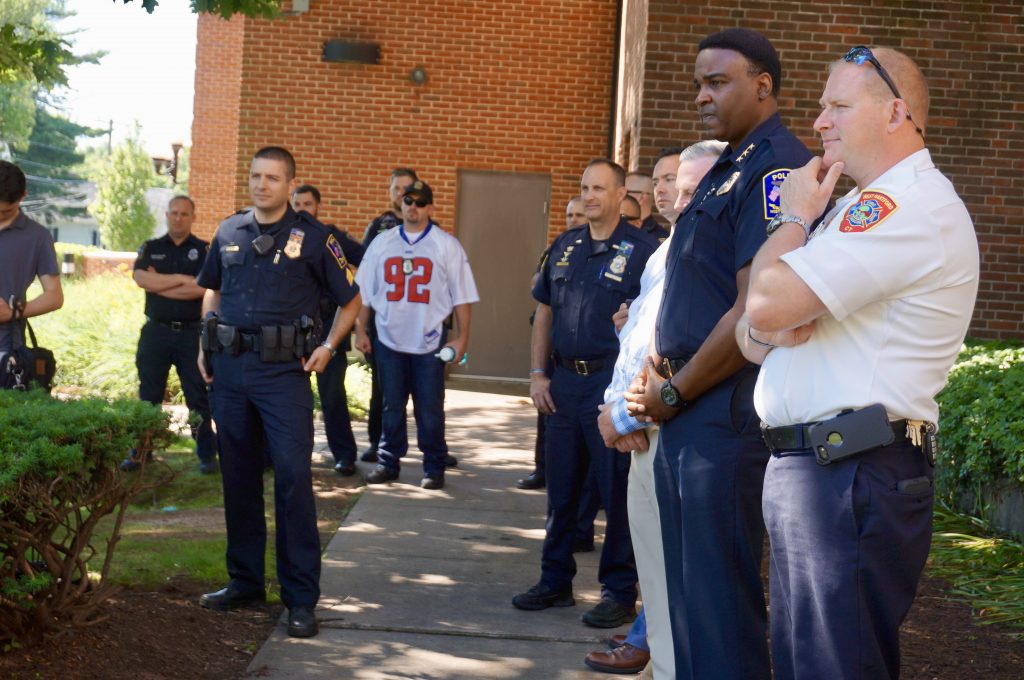 At home, the dogs typically spend a lot of time “resting” in their crates, so that home life and work life are clearly separated. This way, when they come out of the crate, they are ready to “spring” into work, as opposed to being distracted by the environment.

Otherwise constantly interacting with family members in the home would be distracting and confusing to them – but not to worry, they are still allowed some socialization.

While at work, the dogs are treated like royalty with comfortable crates in specially-outfitted police vehicles, where there are temperature monitors and procedures in place if the car becomes too hot or cold for them. Laughing, the officers said that the vehicles were probably more comfortable for the dogs than the people.

West Hartford has two K-9 vehicles in use right now, plus a spare.

Chappell said that the dogs typically retire at age 10, after eight or nine years of service, and then almost always the town signs custody over to their handler and they live the rest of their lives as (very beloved) members of the family. Retired K-9 Jett now lives with the Lazure family.

The bond between dog and handler is like no other; the relationship formed by training and then working together for years is something incredibly unique to K-9 units. The dogs are trained so intensely with their one handler that they actually can’t work with any other officer. This is why if their officer retires, they do so as well.

Lazure said that there is a thorough process for officers who wish to train to become part of a K-9 team. An oral board interview is part of the process, as well as a physical fitness test including running and carrying 50-pound bags up and down the stairs.

Home-checks are also done, to ensure that the home environment is right for the dogs. A household full of young children could be a distraction for the dog.

It’s also important to ensure compatibility between dog and handler. Chappell said that in the past officers have had to test out multiple dogs to find the right chemistry.

For the  past year, West Hartford Police have been without a K-9 team on active duty, and has had to rely on mutual aid from other area departments.

“Right now we owe a lot of other towns favors,” Lazure said, that the town is looking forward to paying back.

There is no charge for mutual aid; it’s just what departments do, said Capt. Michael Perruccio.

According to Perruccio, the donation from generous benefactors Bill and Eva Gurley will cover the cost of the dogs and all the expenses associated with the training process. “It seemed like a win-win for everyone,” said Gurley.

West Hartford Police will be responsible for ongoing expenses, including food, veterinary care, and training time for the teams.

Lazure manages the K-9 Unit now, and when Off. Roman and K-9 Axel return to duty this fall, it will be completely staffed.

“They are living, breathing examples of someone giving back to our community,” Perruccio said. 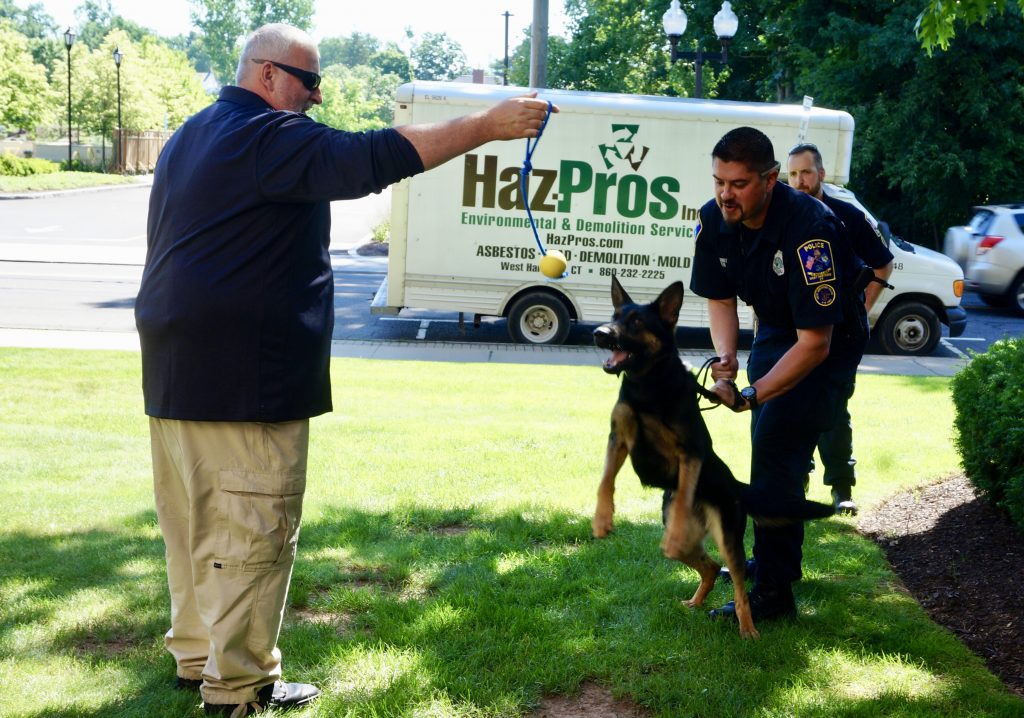 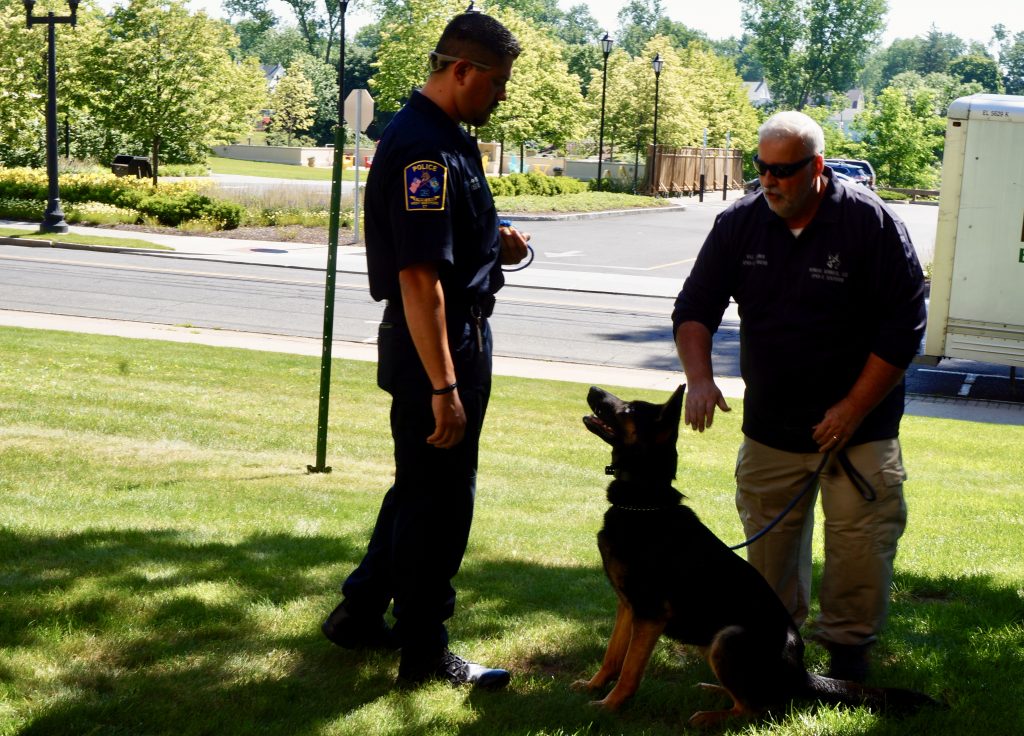 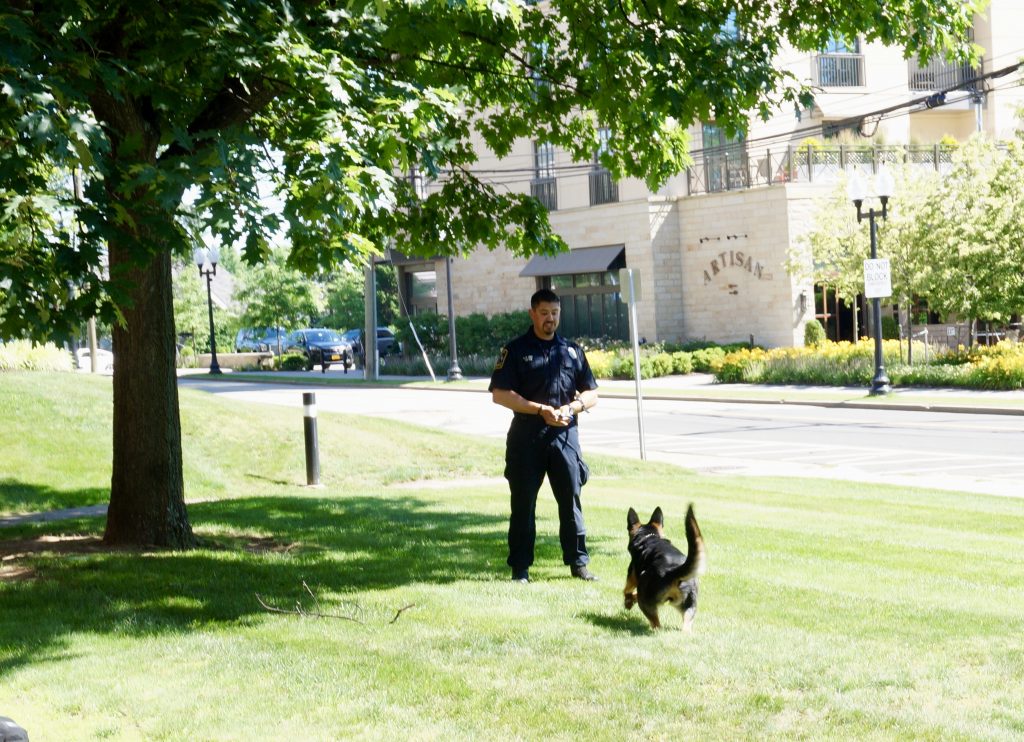 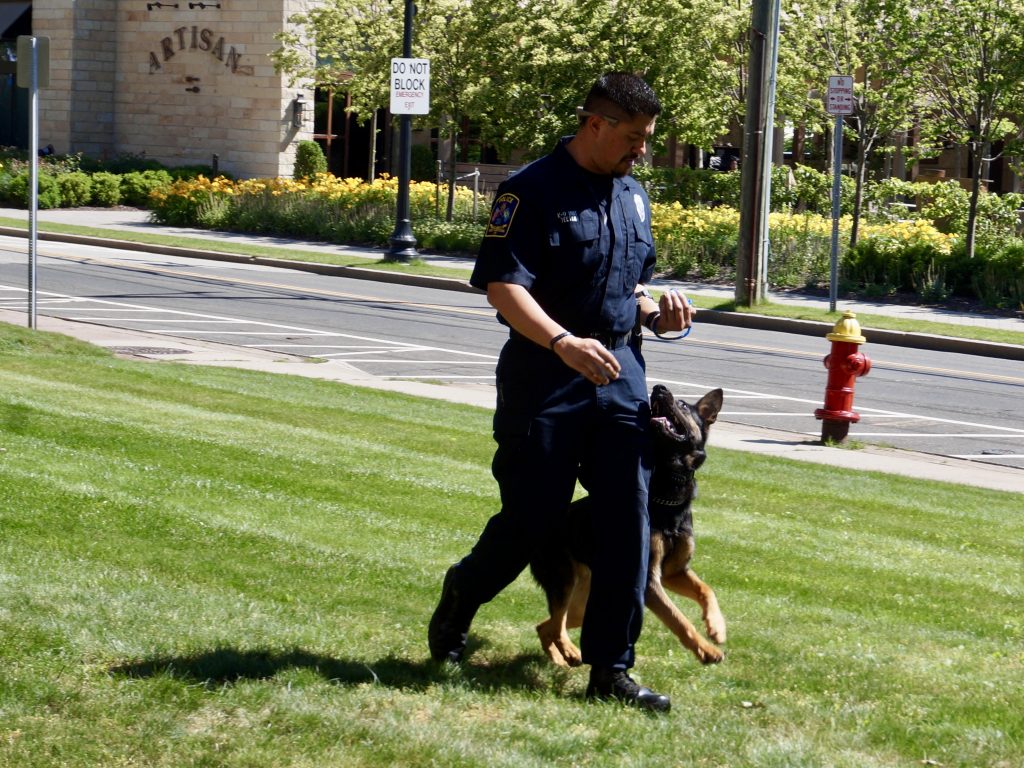 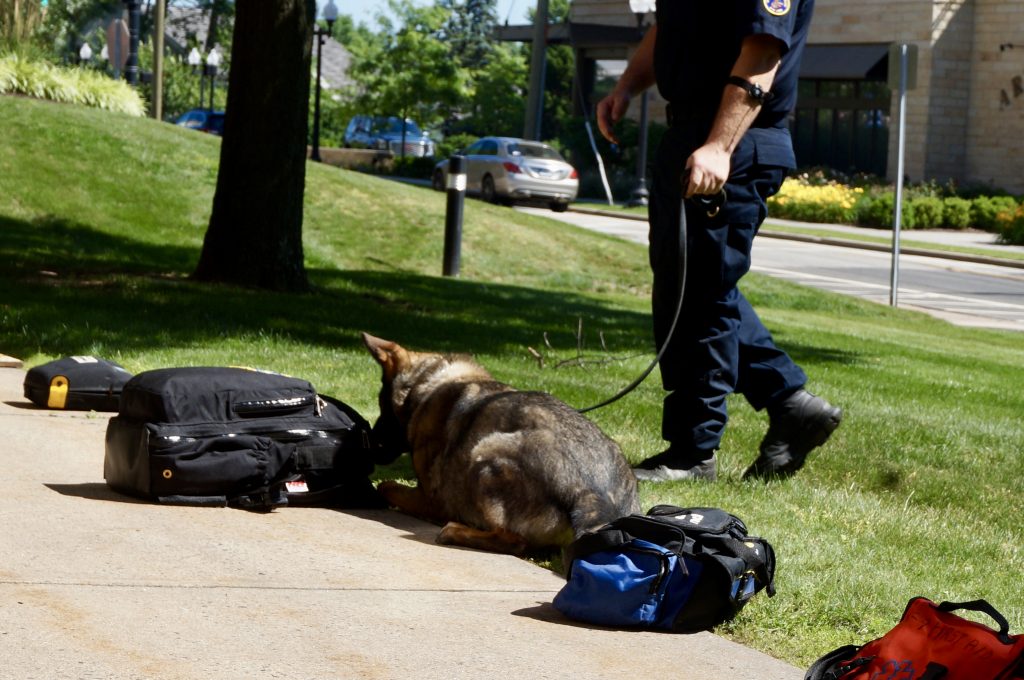 K-9 Lotti, under the guidance of Off. Brian Delgrande, sniffs out bags for narcotics, finding the right one. Photo credit: Ronni Newton 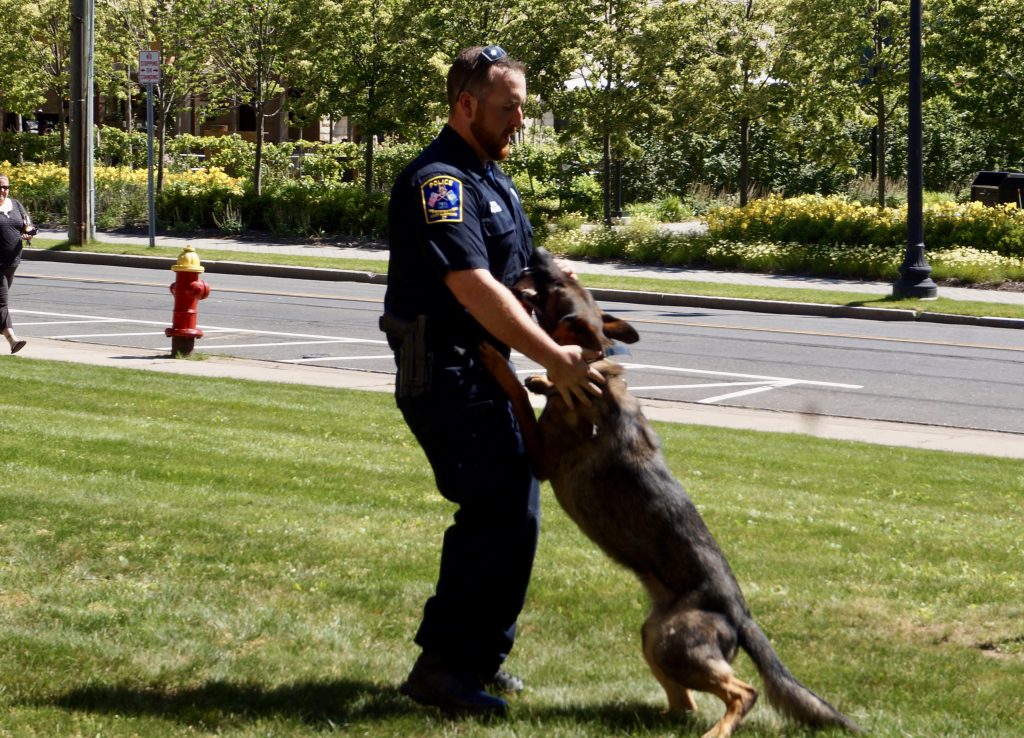 K-9 Lotti plays with Off. Brian Delgrande to celebrate her success in finding the narcotics in a bag. Photo credit: Ronni Newton 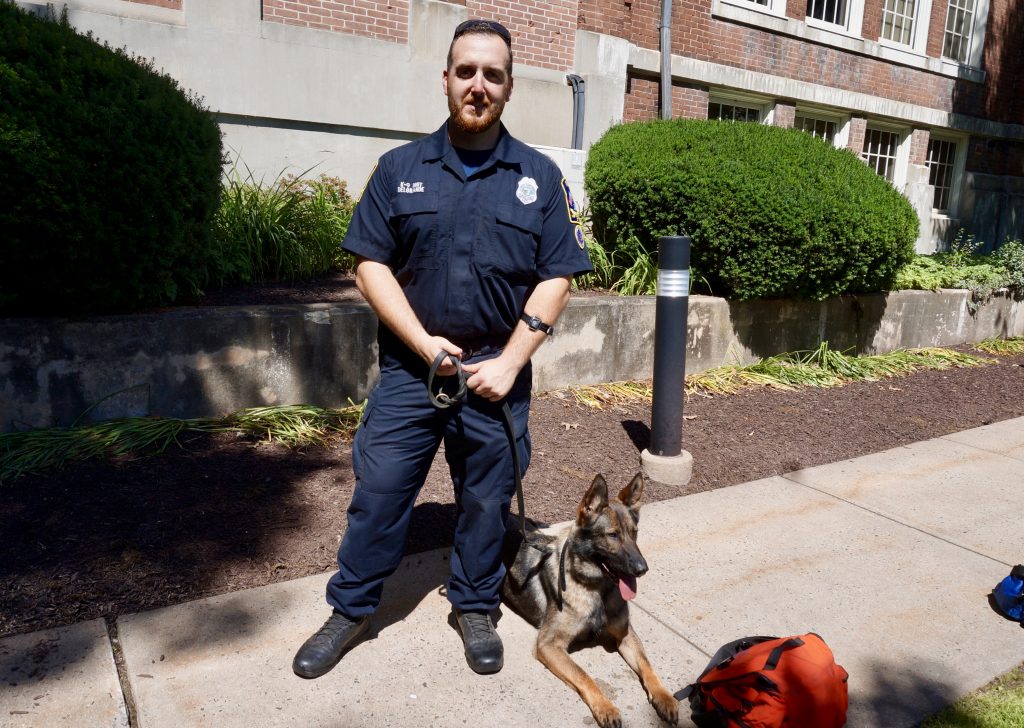 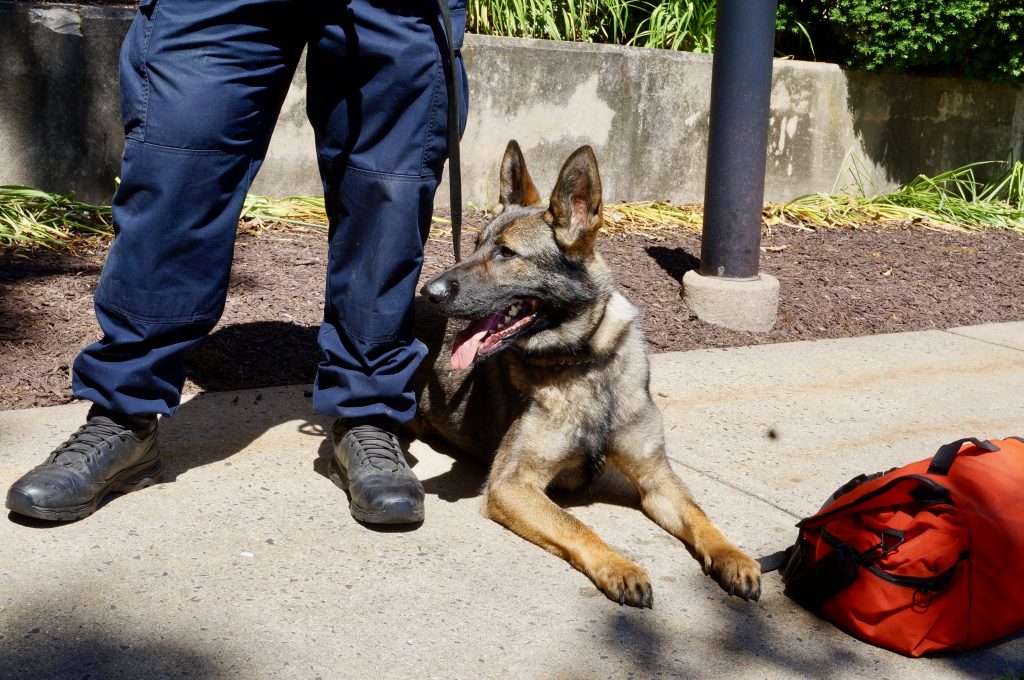 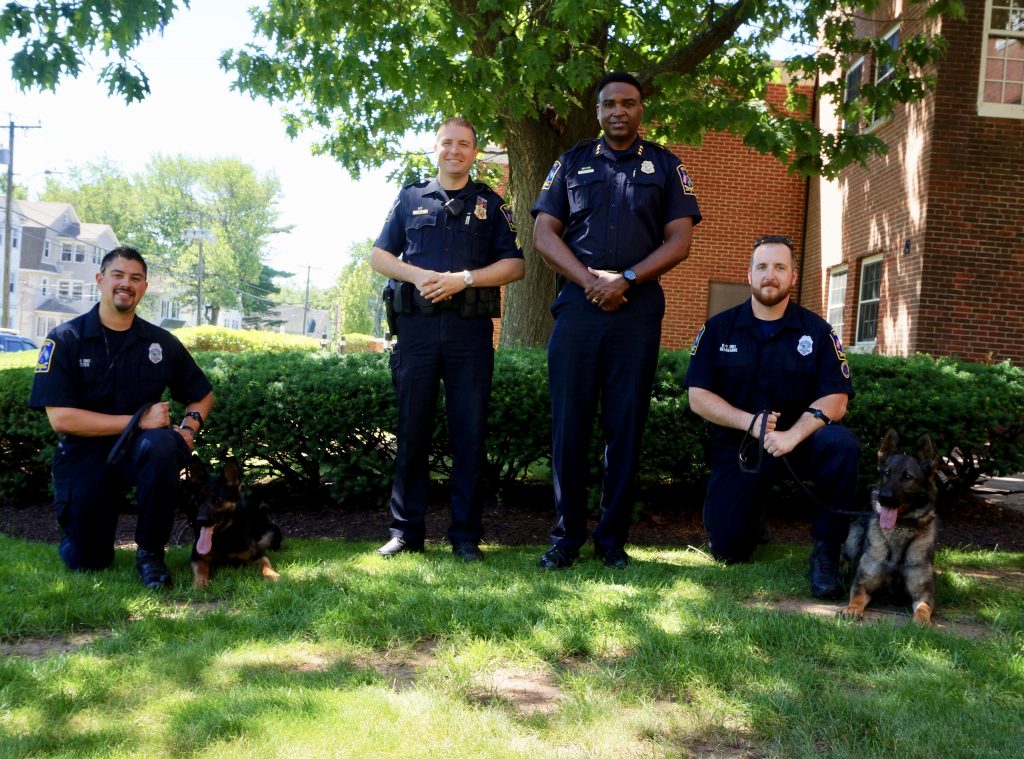 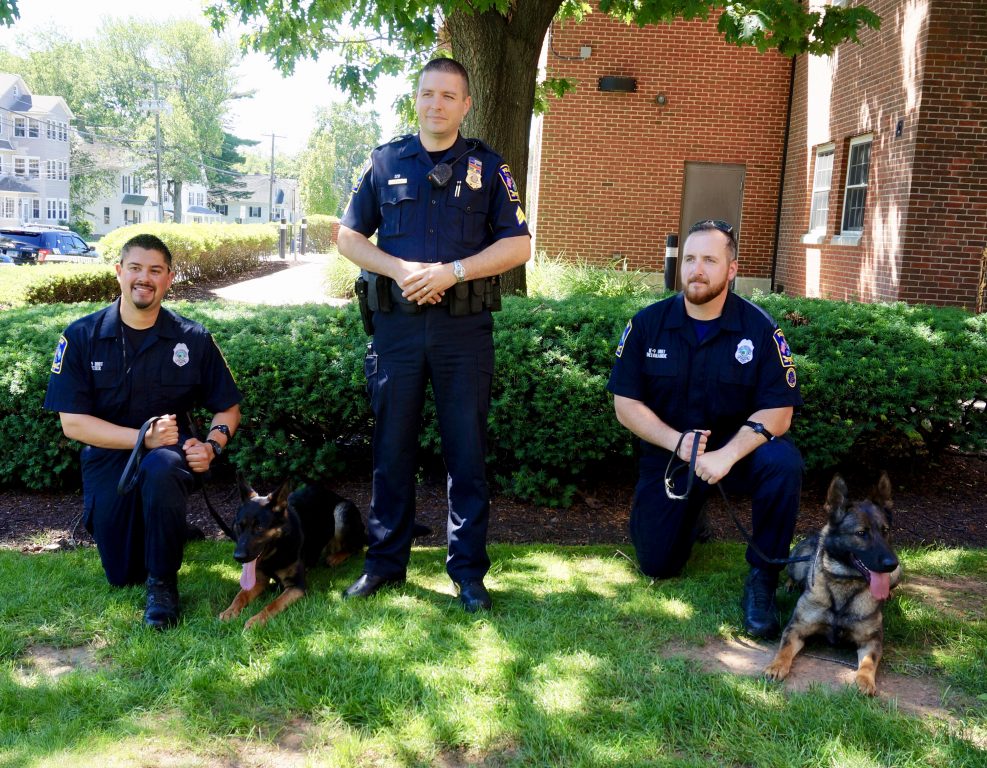