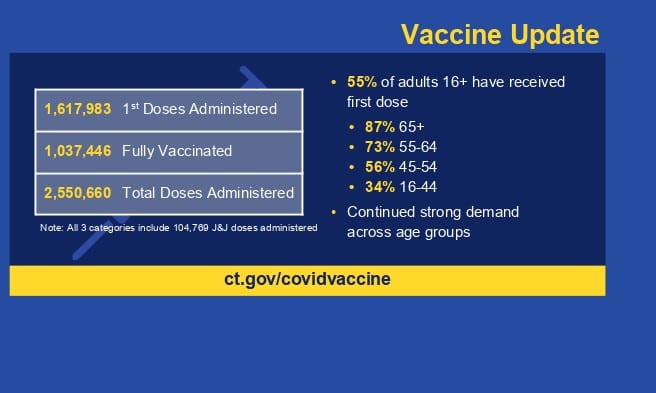 According to data released Thursday, 63.1% of West Hartford residents have received at least one dose of a COVID-19 vaccine. 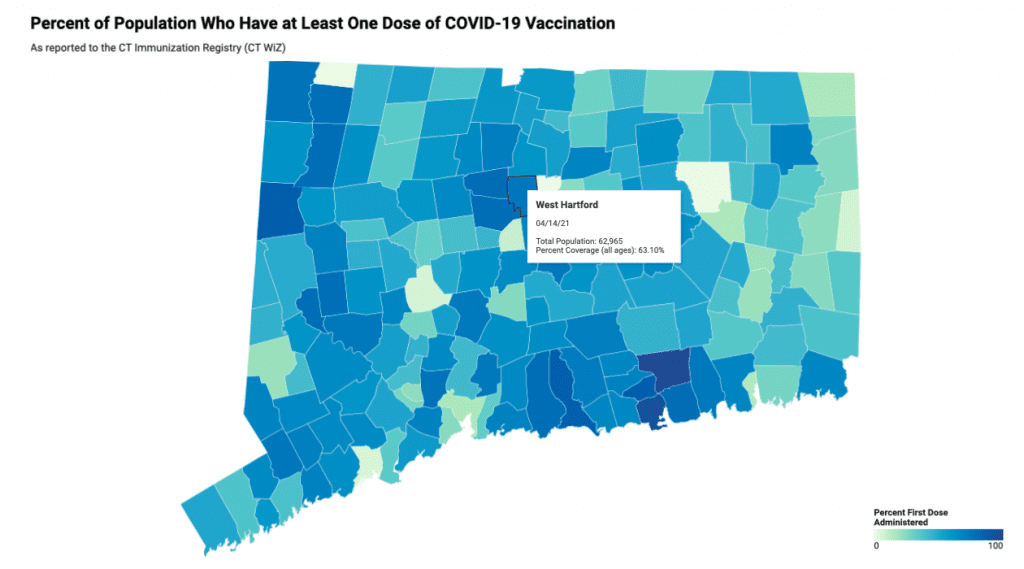 Connecticut reached a milestone in the COVID-19 pandemic this week as Gov. Ned Lamont announced Thursday that more than 1 million residents had been fully vaccinated against the virus.

During a news briefing, Lamont tempered the announcement with an appeal to residents to continue to observe public health precautions as many people still have not received shots.

“That’s great,” he said of the million people fully vaccinated. “That means, remember, that there are 2.5 million that have not yet been fully vaccinated, which is why I have to urge you to be careful a little bit longer.”

As of Thursday, 55% of residents who are 16 years or older had gotten at least one dose of a vaccine. However, inoculation rates skewed sharply to the state’s older demographics. Only about 34% of residents between the ages of 16 and 44 have gotten a shot. Many of them have only been eligible for the last two weeks. Meanwhile, 87% of those 65 or older have taken a vaccine.

“If we could replicate what we do in the older demographic, 65 and above, if we could get that to the rest of the state, get those 16- to 44-year-olds up there, we’re going to have a really nice summer,” Lamont said.

The governor acknowledged the younger crowd may be a tougher sell on vaccination. State officials said vaccination appointments were readily available at providers throughout the state despite a steep drop-off in vaccine supply this week.

Connecticut received around 179,000 doses this week compared to 288,000 last week. The decline was due in large part to the temporary halt on administering the Johnson & Johnson formula while federal officials investigated cases of a rare clotting condition.

Before the J&J disruption, state officials had been predicting that supply of the vaccine would begin to overtake the demand sometime in April. Lamont said Connecticut may be reaching a point now where many of the residents who were urgently seeking vaccination had gotten their shots.

“This next group of people, the next 20 to 30%, we’re going to have to work a little harder to make it easier for them to get vaccinated,” he said. “In those walk-up clinics, people are knocking on doors, they’re making the phone calls, they got friends telling friends ‘I got vaccinated, you should too.’”

The governor speculated that the private sector may start offering incentives for people to get vaccinated. He also suggested that public health mandates may soon fade away if enough of the population is inoculated against the virus.

In West Hartford, data released by the state Thursday indicated that 63.1% of residents of all ages have received at least one dose of a COVID-19 vaccine, up from 51.29% a week ago.

While West Hartford remains on red alert status, the town’s average new positive case rate per 100,000 for the most recent 14-day period measured declined in the past week from 26.6 to 20.9. 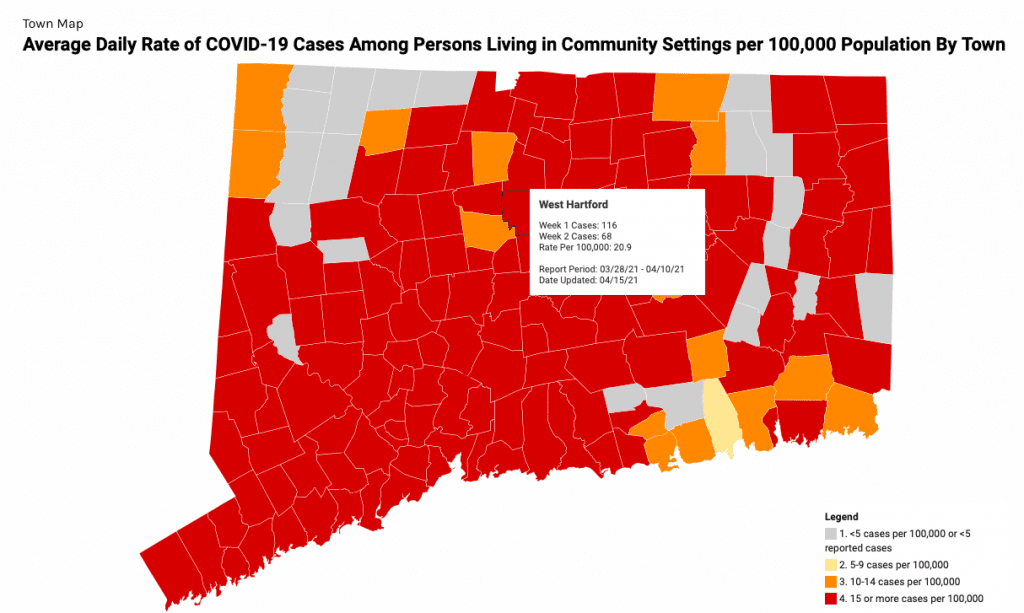 During the briefing, Lamont was asked about New Hampshire Gov. Chris Sununu’s decision to let his state’s mask mandate expire as of Friday. Lamont said Connecticut’s would remain in place for the time being, but he suggested that the state would be in a better position to consider a change 30 days from now.

“I would say that’s true,” he said. “Indoors, you’d probably want to be stricter until you have a vast majority of your people who are vaccinated … maybe you go from a mandate to guidance. It’s still the right thing to do. I think stores would have the opportunity to say, unlike in Florida, ‘We’d feel better if people wear a mask indoors through the month of June.’ We’ll feel our way. Let’s first get closer to herd immunity.”