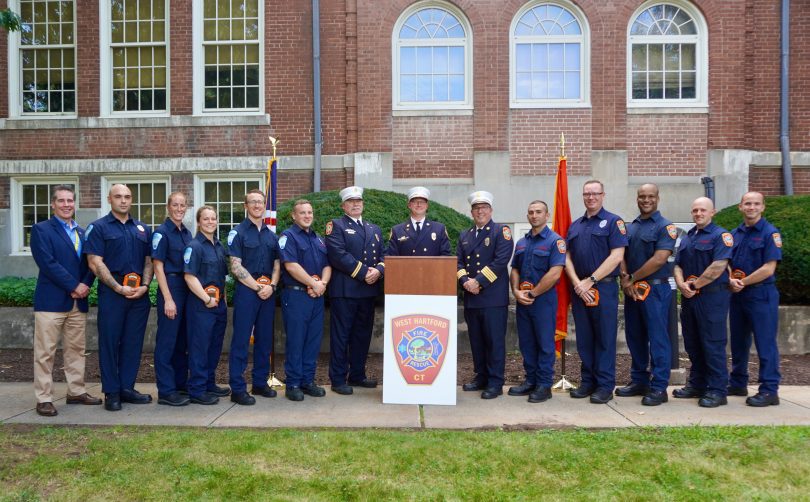 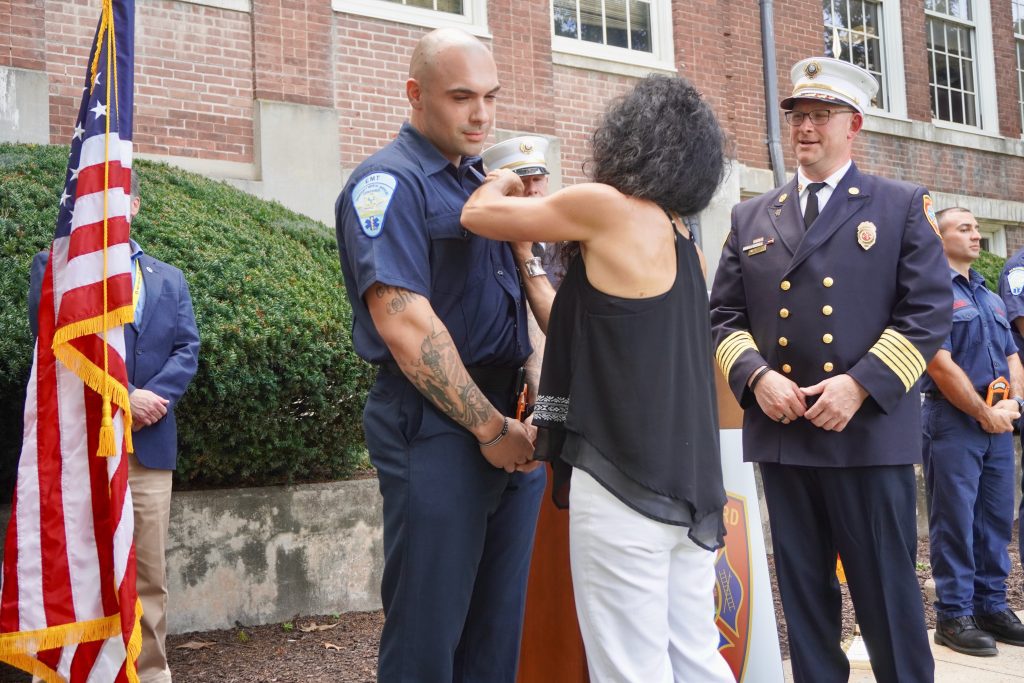 Ten new members of the West Hartford Fire Department, surrounded by family, friends, and other department members, took the oath of office Friday in a ceremony that was held outdoors on the lawn of the Raymond Road headquarters.

The department has just recently reinstated the practice of formally celebrating new members and promotions, and involving families as the commitments are made, Chief Greg Priest said, and despite the hot and humid conditions Friday, “we’ve chosen the heat over masks so you can see the smiling faces,” he said. 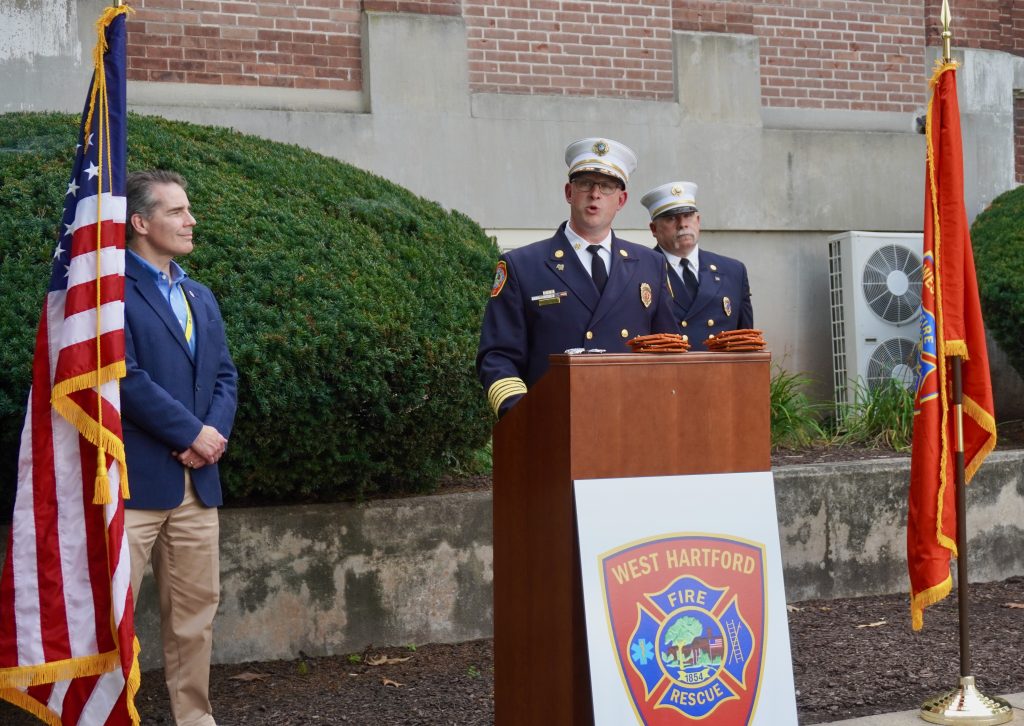 “It is a time where they are coming in new, full of excitement, maybe a little bit of trepidation, but mostly ready to take on anything with a can-do attitude,” Priest said. “The job of a firefighter is rewarding but stressful, and it takes heart, dedication, and a determination to succeed. We believe this ceremony today, no matter how brief, is an important formality as part of the personal foundation in the fire service.”

The size of the class of new recruits is the largest in years, and nearly fills all of the department’s vacancies, Priest said. Eight of the 10 began their training at the Connecticut Fire Academy on Sunday, where they will live during the week for the next 16 weeks. Following their graduation, they will receive their badges.

The other two, who are already certified, participated in a badge-pinning ceremony Friday as well, and have been assigned to training at fire stations in town. 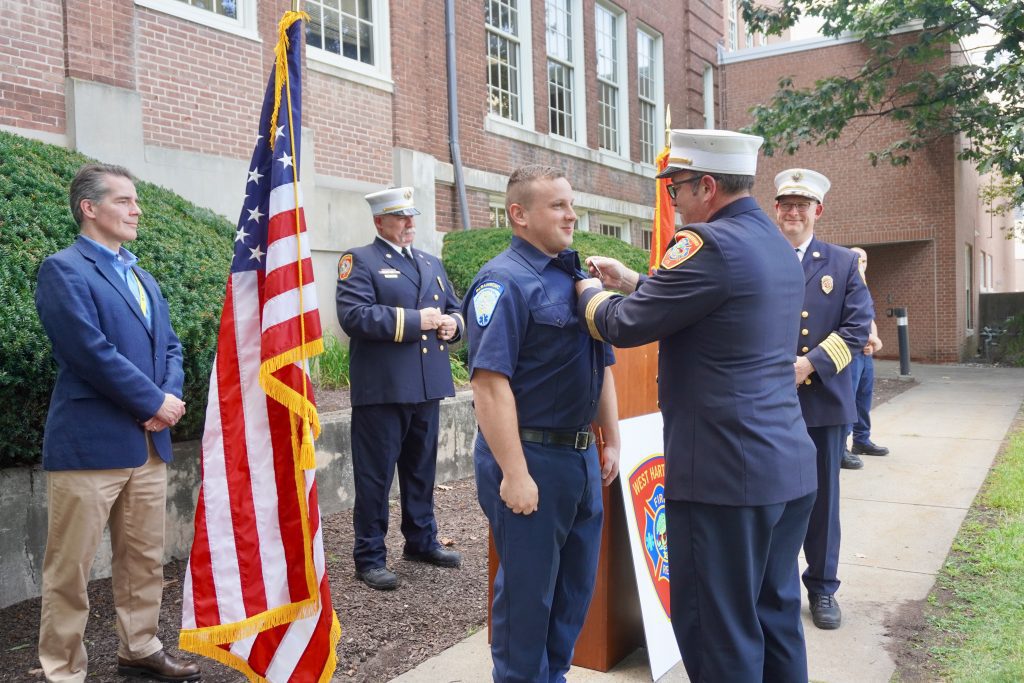 “We are incredibly pleased not just to fill the vacancies but to fill them with such high quality candidates and I am very, very pleased,” Priest said. They bring a wide variety of backgrounds and life experiences to the department.

Before administering the oath, Priest reminded the recruits and their families that “all the uniformed personnel that you see here have sworn not only to protect the public but also to protect you.”

Town Manager Matt Hart also welcomed and congratulated the recruits and their families.

“You are joining a great team, a tremendous team,” Hart said. “The best fire department in the state.”

He also made sure that the recruits understand that they are not only part of the roughly 90-member fire department, but also now part of the Town of West Hartford, which has about 450 full-time employees. “We do everything, A through Z, Animal Control through Zoning,” Hart said. “And we take care of people. We support our community from cradle through grave, literally and figuratively.” 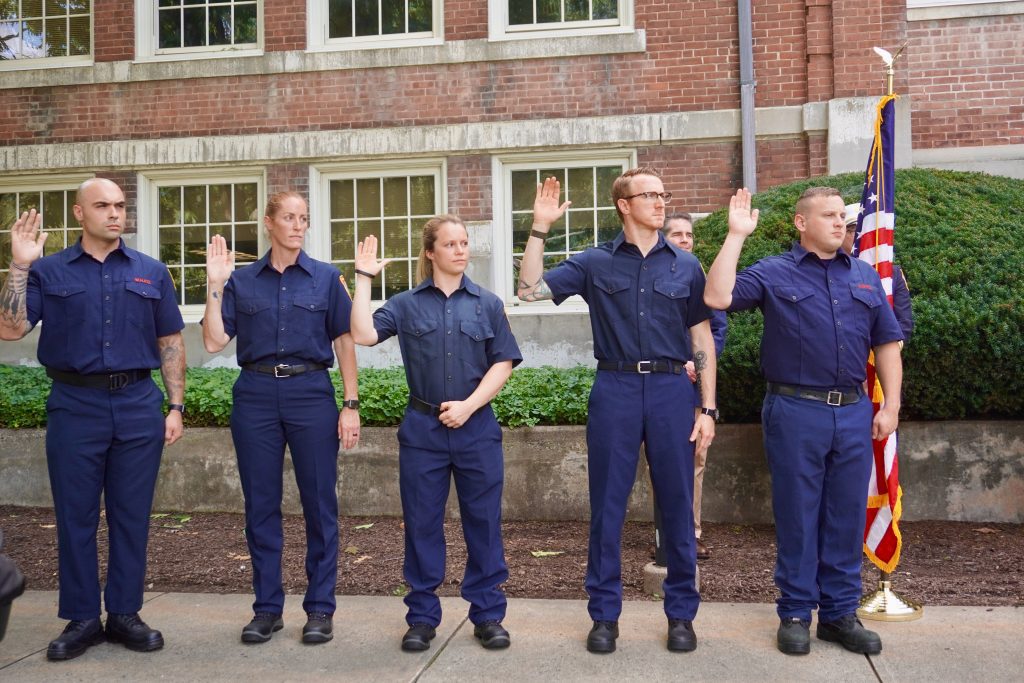 Below are excerpts from the biographies provided by each of the 10 recruits.

Avarista, of Tolland, CT, is married and has two dogs. He said has been involved with the fire service since the age of 14, and said he “loves the challenges of emergency as well as routine calls, and the reward of giving back to the community and those in need.” Hobbies include riding motorcycles, woodworking, hiking, kayaking, and working on cars and motorcycles. 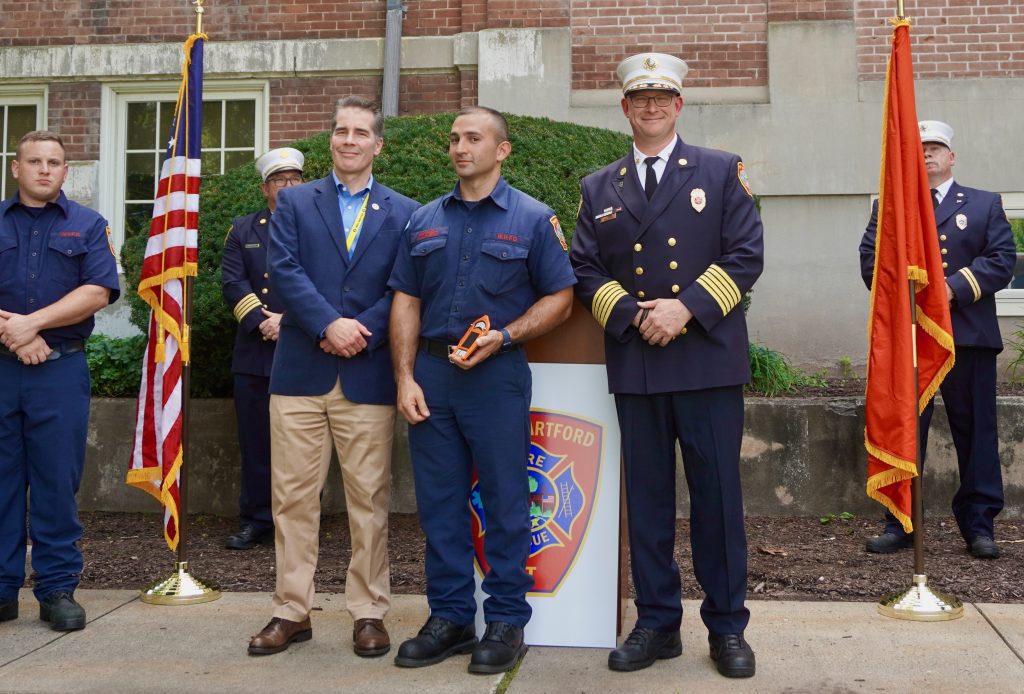 Bush is from Vernon, CT, and is married and has a 2-year-old son and a dog. A long-time volunteer firefighter, he said the fire service is his calling. ” I am proud to be hired as a firefighter/paramedic in the town of West Hartford and believe that my past training and experience will help me to provide great service to the people of West Hartford,” he said. Hobbies include hiking and running with his family, snowboarding, sci-fi books and movies, dad jokes, and photography. 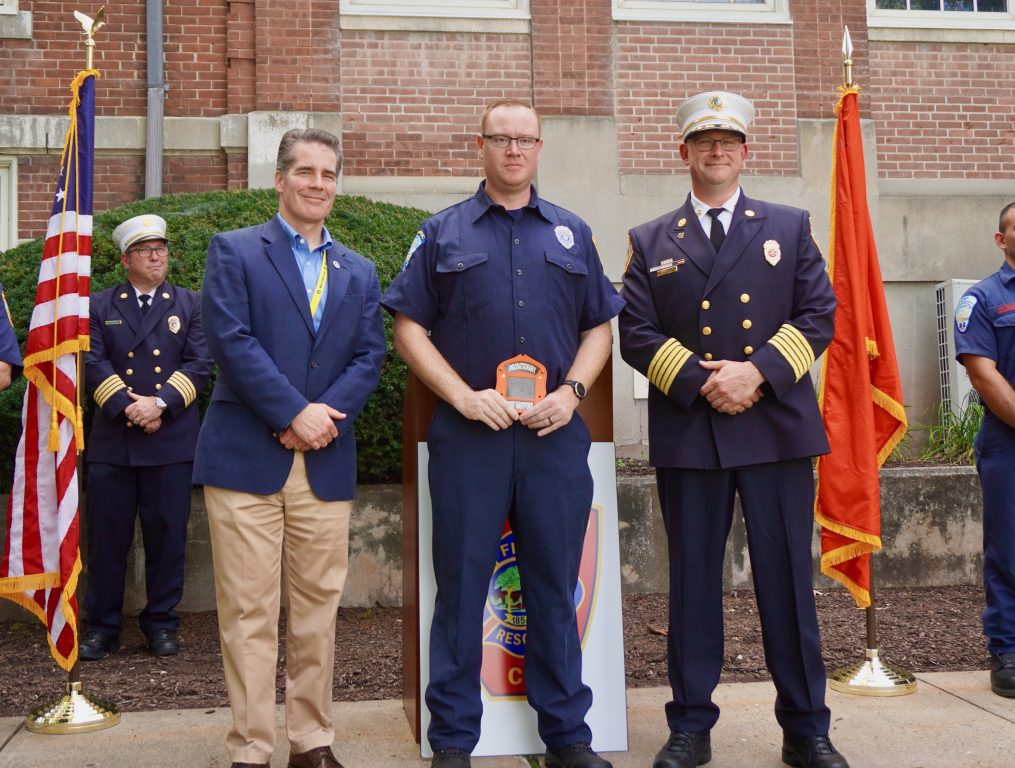 A native of Haiti, Descollines, who is married and has three children, moved to Connecticut in 2012 and worked as a landscaper. He said said he was instilled with a “heart for service” as a child, when his family served as his town’s unofficial ambulance service. Descollines has been a volunteer firefighter in Middletown for the past four years – ever since he saw a sign looking for volunteers – and said he has loved learning about EMS and the fire service. “My love for the fire service has kept growing,” Descollines said. West Hartford is amazing, he added, and he said the first day he met Chief Priest, “this was home.” Hobbies include hiking and biking with his wife and children. 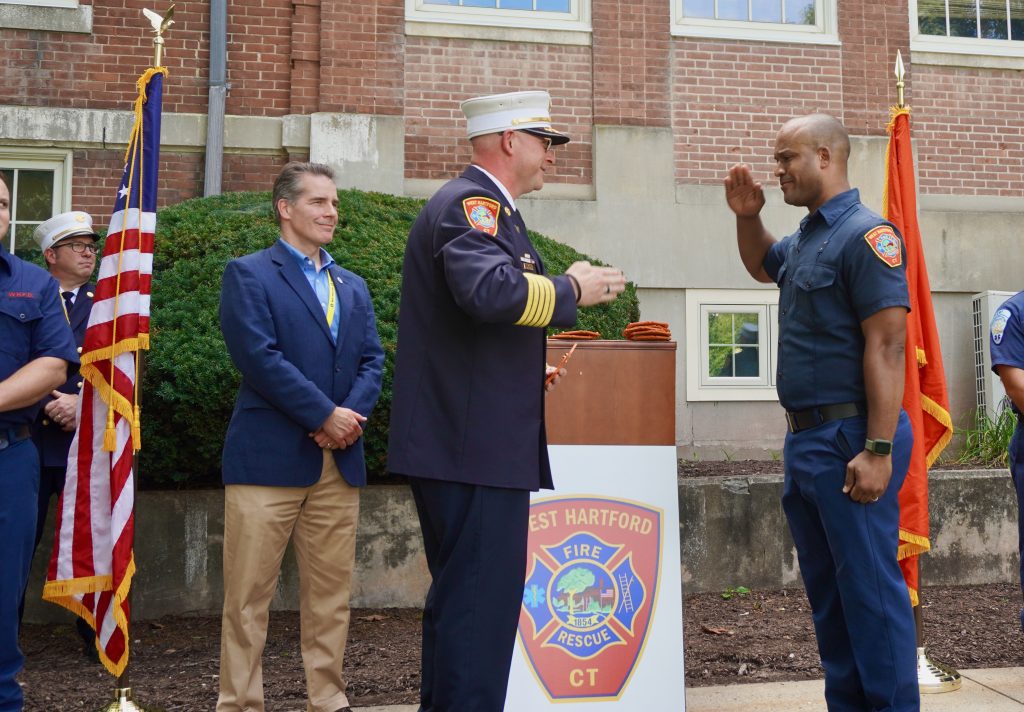 Gonska, a Wethersfield resident, grew up in Torrington in a family of first responders. Both of his parents were involved in EMS and his brother is a Torrington Police Department sergeant. He’s been a paramedic for nine years, and has worked in Hartford and most recently as a firefighter/paramedic in Guilford. “I look forward to working closer to my community and taking the experiences and lessons I’ve learned in the past and putting that work towards the high standards of customer service and patient care, that West Hartford Fire Department is known for,” he said. Hobbies include outdoor activities, hiking, golfing, and CrossFit. 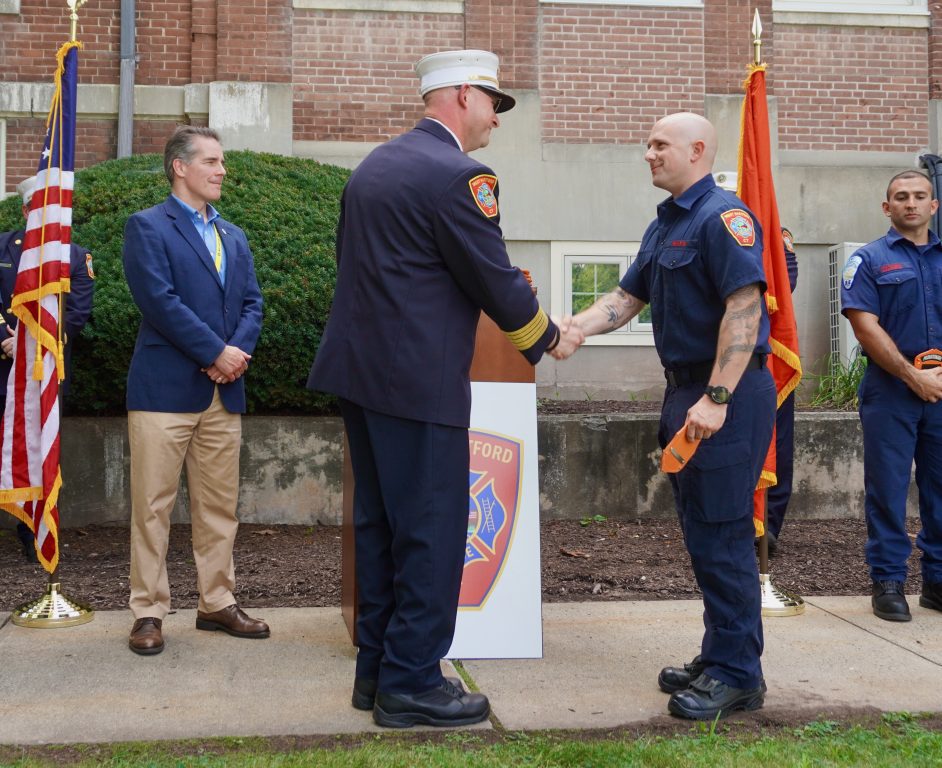 Harrelle lives in Killingly, CT, where he grew up, and said service to others is the most rewarding career. “There’s an extreme amount of satisfaction I get from helping someone in their time of need. I joined the West Hartford Fire Department because I found the town to be very active every day and the department to be extremely progressive with strong public relations. I’m a young, enthusiastic, and passionate individual that loves fire/EMS and will show up every day with a smile on my face and ask what I can do to make the department better in order to best serve the citizens and visitors of West Hartford.” Hobbies include hiking in New Hampshire, family vacations, and basketball. 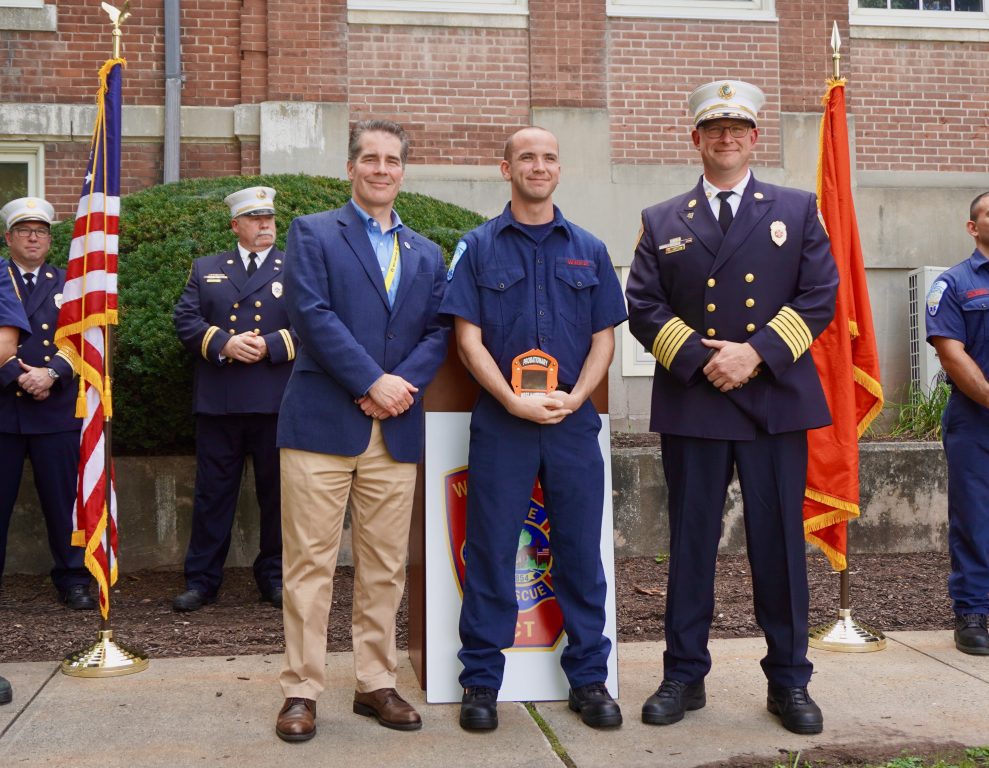 Lee, of Killingly, is a third-generation firefighter whose family history in the fire service goes back to his great grandfather and also includes a great uncle, two uncles, and a cousin. After a year at Massachusetts Maritime Academy, he joined the U.S. Navy, where he served four years and after his honorable discharge he returned home, earned his EMT certifications nd started volunteering with his local volunteer fire department and ambulance company. “After experiencing the excitement of the fire station, I soon earned my fire I and II certifications. After this I was hooked on learning and doing more and decided that this is what I wanted to do as my career. I took the steps necessary to advance my education and get on the job as a career fireman,” he said. He became a paramedic, earned his bachelor’s degree in fire service administration, and has accumulated 11 years of fire service and eight years of paramedic experience. “I am especially passionate about technical rope rescue and heavy vehicle rescue. I am excited to continue to learn and do more as I progress in my career and continue to embrace the lifestyle as a firefighter with the West Hartford Fire Department,” he said. Hobbies include spending time in the mountains of Maine and New Hampshire, hiking and taking on the challenge of spending days in the wilderness with only the supplies he can carry. 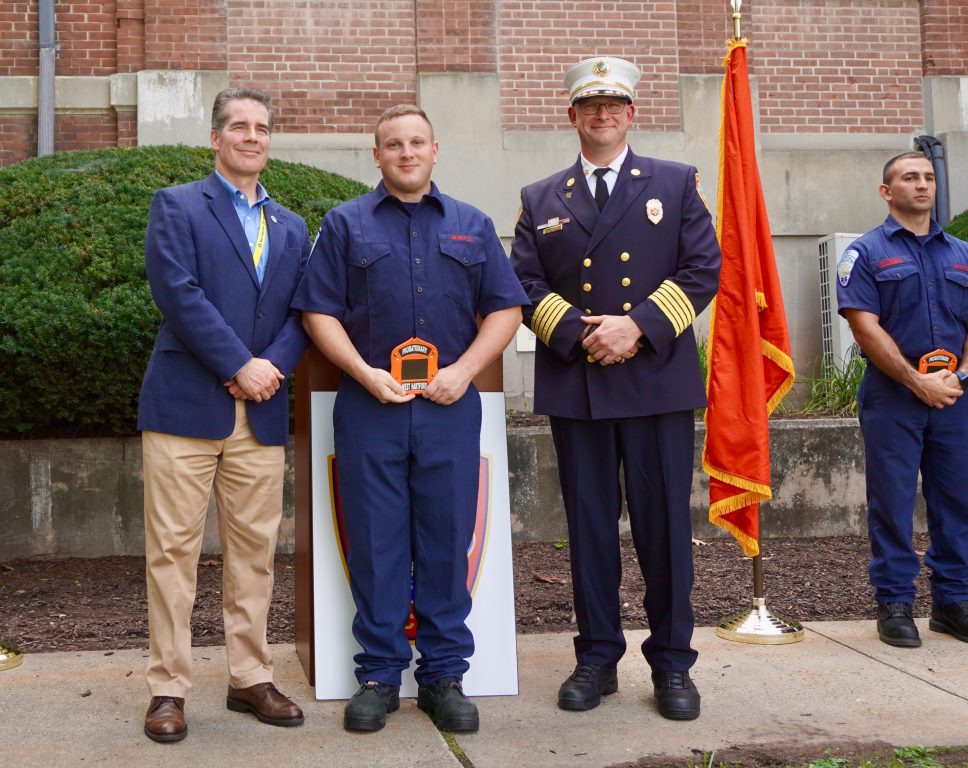 McDermott, of West Hartford, is married and has a son. He said he grew up playing team sports year-round, and has owned two businesses with his wife, and looks forward to giving back to his hometown community, utilizing his team skills, “and to have the opportunity to be my best, during someone else’s time of need.” Hobbies include fitness and travel, and he said he is an “avid hunter.” 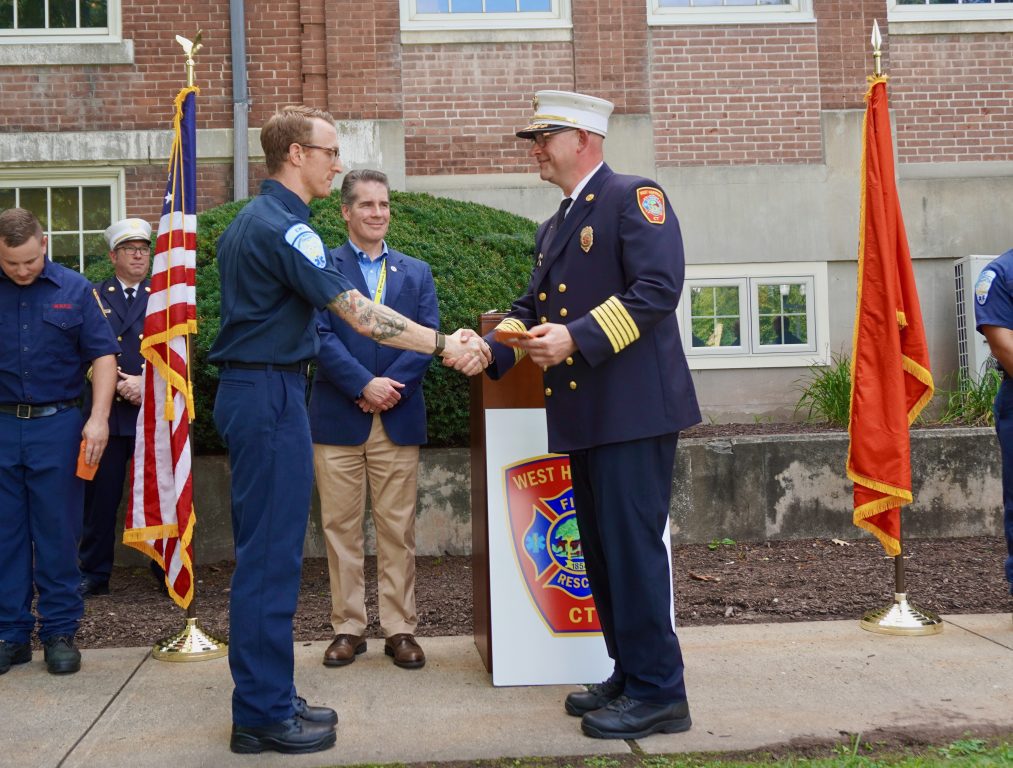 Ozga, a native of Bristol, lives in Bolton, CT, with her partner and her dog. After joining the Bolton Volunteer Fire Department in 2020, she knew she wanted to pursue a career in firefighting. She said as someone who never shies away from a challenge, she’s “looking forward to having a career that will allow her to push herself mentally and physically on a day-to-day basis,” and is excited to bring her strong work ethic to the West Hartford community. Ozga said she is an avid CrossFitter and Olympic weightlifter. 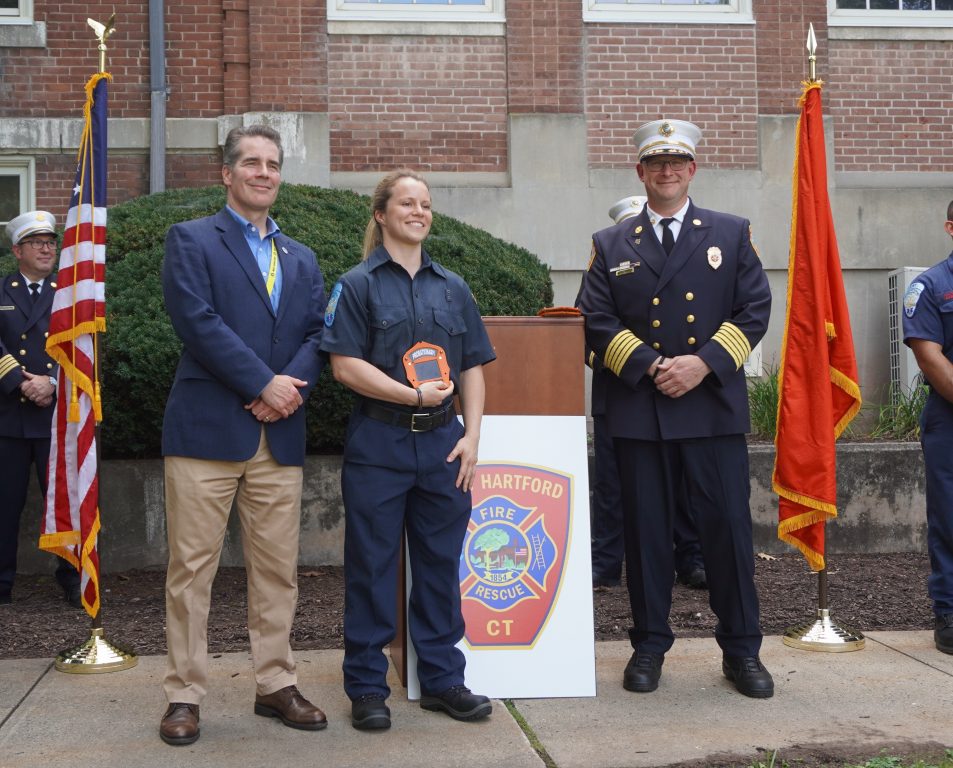 Tyrseck lives in Killingworth with her husband and three children. A 20-year veteran of the Middletown Police Department, she brings first responder and community service experience to the role, and said she is excited about starting her second career “as a first responder with the top fire department in the state. West Hartford Fire Department is the leader in customer service, community outreach and firefighting; I am honored to become a part of this amazing team.” She said she enjoys fundraising for local charities and other hobbies include outdoor activities with her family such as hiking, biking, playing sports, and going to the beach. 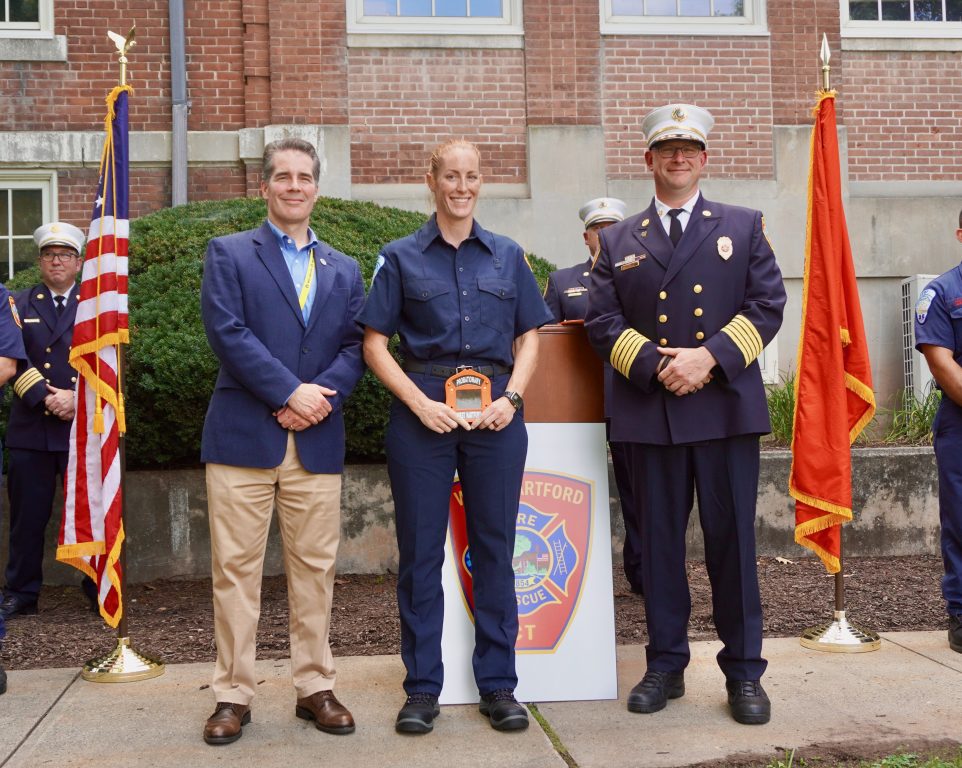 Wilson, who is from Wethersfield, said his father was a volunteer firefighter for 35 years, and he has been a firefighter in another career department for the past three years. He graduated from the fire academy in 2018. “I’m very excited to serve the Town of West Hartford because it is such a unique and thriving community. I believe that my passion for this job and ambition to always learn more and be the best firefighter/EMT I can be will benefit the West Hartford Fire Department,” he said. When off duty, he enjoys spending time with friends and family. 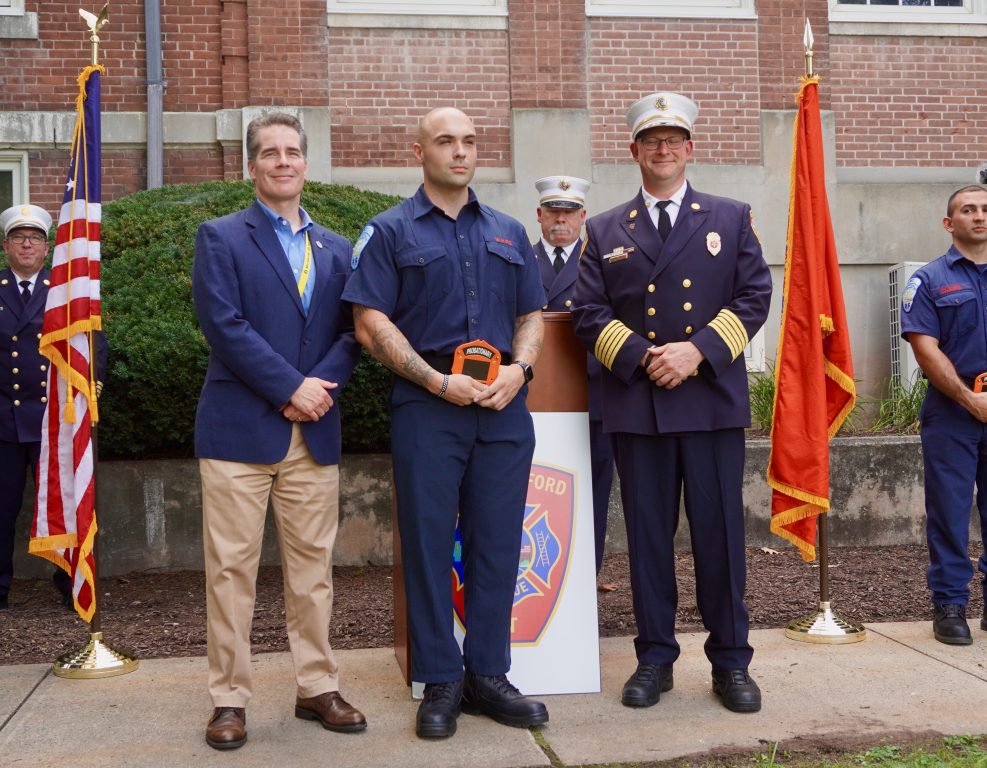 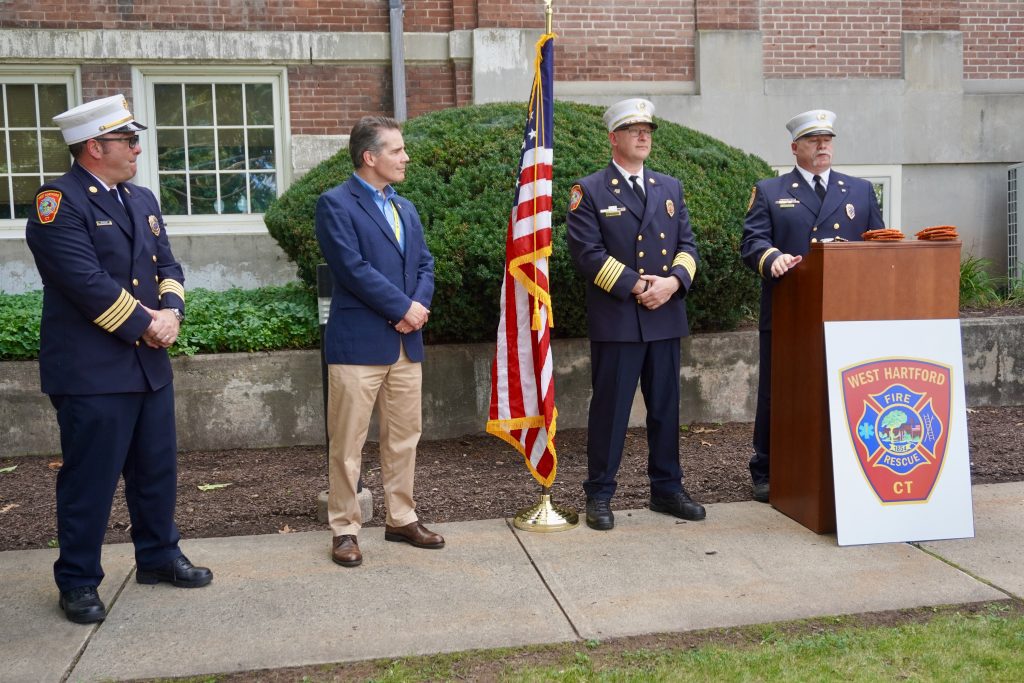 Battalion Chief Mark Bassett served as emcee of the ceremony, and he explained the importance of the oath. “A firefighter takes their oath knowing that it is not just words but that someday it may be required of them to give their very lives to support this oath,” he said.

The date of the swearing in was particularly significant, Priest said, because it marks the one-year anniversary of the passing of a beloved department member, Apparatus Operator Joe Mangione, from cancer. 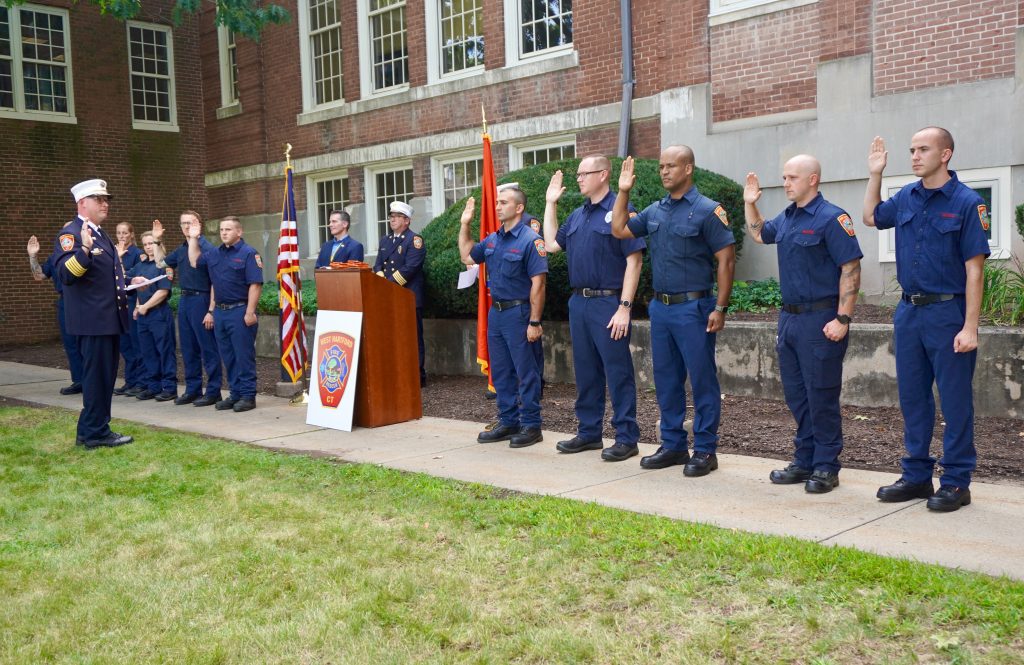