Two of the 22 diverse and compelling films that will be featured in the 22nd Annual Mandell JCC Hartford Jewish Film Festival feature Connecticut natives – including one from West Hartford.

The 22nd annual Mandell JCC Hartford Jewish Film Festival (www.hjff.org) is excited to announce its official lineup for this year’s festival, which opens March 8 and runs through March 18, 2018.

This year’s festival features a diverse collection of masterfully told films that address current issues of social justice, race relations, American-Jewish life, anti-Semitism, and more. These films, along with the selection of documentaries, heart-warming comedies and dramas about the arts, women’s stories, love, loss and survival come together to create a film festival that will stir emotion and inspire conversation.

“We are honored to bring such a diverse and culturally compelling choice of films to the Greater Hartford community,” says David Jacobs, Executive Director of the Mandell JCC. “The stories told in this year’s lineup demonstrate a depth of Jewish culture, rich in identity, creativity and resiliency and we’re so proud to offer something for everyone.”

The Hartford Jewish Film Festival will open on Thursday, March 8 with the Connecticut Premier of Itzhak, an affectionate documentary portrait of the world-renowned violinist Itzhak Perlman. Winner of the “Audience Award for Best Documentary” at the Miami Jewish Film Festival, Itzhak is a story of obstacles and survival that chronicles how humor and talent combine with discipline and drive. The evening kicks off with a dinner at 5:30 p.m. at the Mandell JCC, followed by the film screening at 7:30 p.m. The dinner will feature a special performance by The Hartt School’s MuUyas String Trio.

Closing night of the Festival, which will include a dessert reception, will feature Across the Waters on Sunday, March 18 at 7 p.m. at the Mandell JCC. Unsure of whom they can trust, a Jewish musician and his family make a frantic escape from Nazi-occupied Denmark in Across the Waters, a gripping story of survival and rescue. 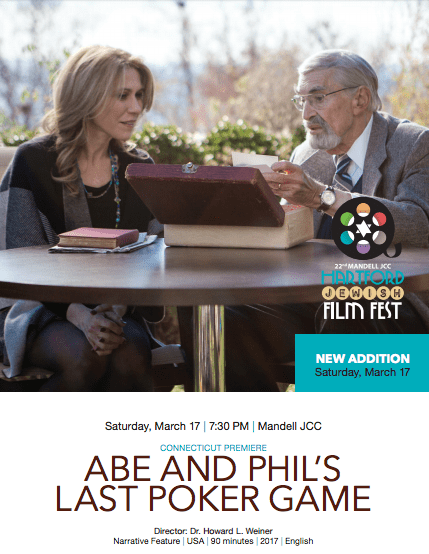 Abe and Phil’s Last Poker Game (March 17, 7:30 p.m. at Mandell JCC), starring the late Oscar-winning actor Martin Landau in his final onscreen performance, is a touching story about discovering that age is not a barrier to finding new love and friendship. Following the screening of this film, West Hartford native Pamela Dubin will lead a Q & A session with the audience.

Special events during the Festival include a “free” screening for seniors 70+ of Sammy Davis Jr.: I’ve Gotta Be Me, Tuesday, March 13 at 1 p.m. at the Mandell JCC Innovation Center with light refreshments to follow. With a star-studded roster of interviewees, Director Sam Pollard dives into the 60 years of show business career of the iconic entertainer.

The additional films and shorts being screened at the 2018 Mandell JCC Hartford Jewish Film Festival include: Land of Milk and Funny, The Testament, Harmonia, Bye Bye Germany, An Act of Defiance, Keep the Change, Raise the Roof, Etched in Glass: The Legacy of Steve Ross, The History of Love, Shelter, 1945, The Cakemaker, Doing Jewish: A Story from Ghana,  The Settlers, And Then She Arrived, In Between, and Ben-Gurion, Epilogue.

Ticket prices range from $12 advance purchase/$15 at the door for most films to $50 for opening night film and dinner. To purchase tickets, visit www.hjff.org. For more information on the films being featured, contact Jill Ziplow, the Mandell JCC Cultural Arts Director and HJFF Director.

About the Mandell Jewish Community Center