The Shops at 485 New Park in West Hartford will hold an Earth Day Block Party on April 22 which will also be a fundraiser for JDRF and KNOX, Inc. Photo credit: Ronni Newton

The Earth Day Block Party at the Shops at 485 New Park Avenue in West Hartford is a fundraiser for the Juvenile Diabetes Research Foundation and KNOX, Inc.

Earth Day will be celebrated along with several other notable occasions on Saturday, April 22, as the Shops at 485 New Park Avenue will hold a charity event and block party.

Admission is free, and locally-brewed craft beer produced by New Park Brewing, plenty of food, and live music will be enjoyed from noon through 6 p.m.

The event will celebrate the recent opening of West Hartford’s first craft brewery, New Park Brewing, as well as the 1,000th radio program hosted by WRTC-FM’s Chris Cowles, who will broadcast live from the block party.

Ray Morant’s Soul Tsunami and Old Royals will perform, and there will be plenty of artists and other vendors with goods on display.

Food will be available from Iron & Grain and Bear’s Smokehouse food trucks.

Harvest Wine & Spirits Director of Operations Ian Halpern said in a news release that the business, which recently opened a new location on New Britain Avenue in Elmwood, is committed to doing at least two fundraisers a year. “This represents a fantastic trifecta: award-winning beer from the town’s first brewery, some great bands, and fantastic food – all for a great cause.”

Cowles, who has collaborated with Halpern on previous charity events, is the host of “Greasy Tracks,” the longest-running soul/blues radio program in Connecticut. He said in a statement that the music will be an important part of the event. “Music, like great beer, has a way of bringing people together,” Cowles said. “This has the potential to become a really big annual happening. It has all the ingredients – we just need the weather to cooperate!”

Holding a fundraiser for JDRF strikes a personal chord with Cowles, a diabetic for more than 40 years.

According to the release, “JDRF is the leading global organization funding Type 1 diabetes research. Founded more than 45 years ago – JDRF has more than 100 locations in the United States and six international affiliates – it has funded more than $2 billion in research.”

The other charity being supported by the block party, KNOX, Inc., was founded as a trust fund in 1966 by Hartford Councilwoman Betty Knox to help improve the city.  KNOX, Inc. focuses on funding community development and operating “greening” efforts, including on-going programs such as Blooms Planters, Trees For Hartford Neighborhoods, Green Team, and Hartford Cleans Up.  KNOX, Inc. is supplying and maintaining planters in West Hartford’s Elmwood, Bishops Corner, Home Design District, and Park Road neighborhoods this year. 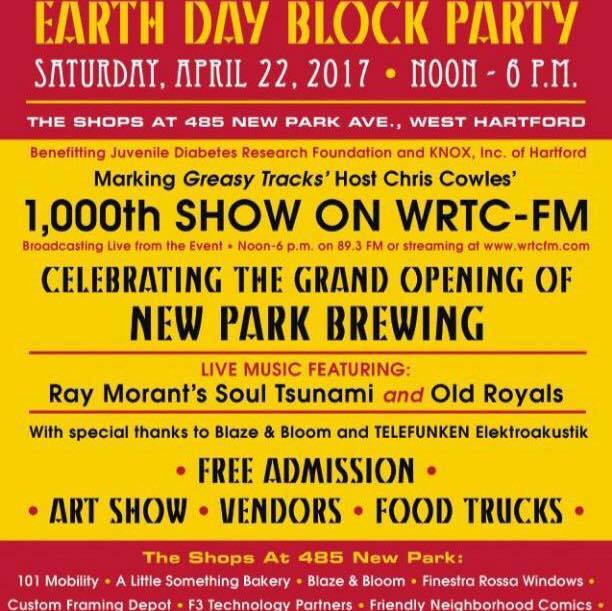