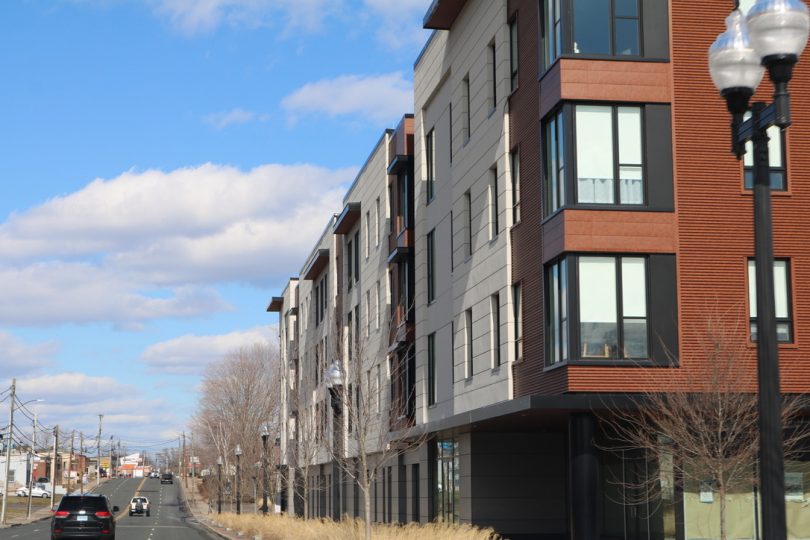 The West Hartford Town Council unanimously approved an ordinance that places a moratorium on uses that are not supportive of transit-oriented development in the area surrounding the CTfastrak stations. 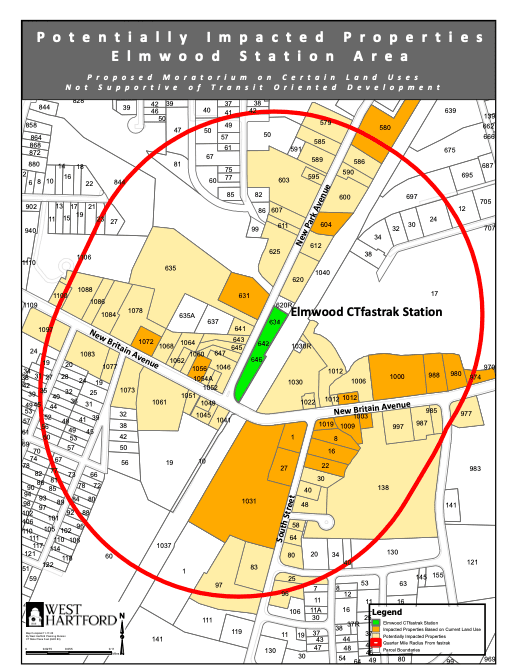 The Town of West Hartford is hoping to encourage transit-oriented development in the New Park Avenue corridor near the two existing CTfastrak stations in the area, and at its Nov. 24 meeting, the Town Council unanimously approved a nine-month moratorium on uses that do not support that goal, in order to review existing zoning and consider new land use regulations.

“Moratoriums are not something we do frequently, nor do we take them lightly,” Mayor Shari Cantor said. “We want to make sure we are doing what is right for the long term of our community.”

The nine-month moratorium will apply only to lots in the business or industrial zone that are located within a quarter mile of either the Elmwood or Flatbush CTFastrak stations, and will also apply only to lots that front the following roadways: Darcy Street, Flatbush Avenue, Jefferson Avenue, New Britain Avenue, New Park Avenue, Prospect Avenue, and South Street. 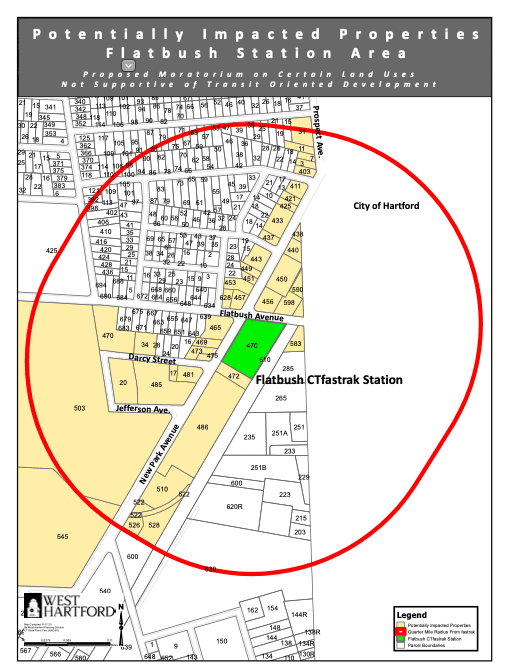 Town Manager Matt Hart, who along with Town Planner Todd Dumais explained the proposed moratorium in detail during a public hearing that directly preceded the meeting, said the purpose is to provide staff, the Council, and others with the opportunity to work collaboratively on zoning that would support transit-oriented development – which the town has been actively encouraging for at least the past five years. The town’s recently-approved 2020-2030 Plan of Conservation and Development (POCD) identifies expansion of transit-oriented development and consideration of transit-oriented district zoning as key economic development and land use goals.

Without the moratorium in place, an owner or new buyer of a property could convert it to a use not supportive of  transit-oriented development, Hart said. The town has already received $3.5 million in grants which will support streetscape improvements in the New Park Avenue corridor which will make it more pedestrian as well as bike friendly, consistent with the town’s complete streets vision.

“Transit-oriented development is relatively high density, mixed-use development typology,” Dumais said, located within a short walk (5-10 minutes) of a fixed transit station. It is intended to be pedestrian-oriented and mixture of residential, retail, office, and other commercial uses in an identifiable district where people can live, work, and play. Residential density is typically 12-15 units per acre density, with low parking requirements.

“To date much of the town’s focus outside of its planning efforts have been on infrastructure,” Dumais said, but efforts will now turn toward a review of the zoning.

The moratorium is a first step to engage property and business owners as the town seeks to foster and promote unique opportunities for transit-oriented development around the stations, Dumais said.

Uses that have been identified as “not supportive of transit-oriented development,” and will be subject to the moratorium, include: “car wash facilities; contractors yards; drive-in facilities/drive-up windows accessory to any bank, restaurant, retail, or pharmacy uses; junkyards; kennels; motor vehicle sales, service, and repair and gasoline service stations; nurseries and greenhouses, including sales area-goods pertinent thereto; outdoor storage of material and equipment; passenger automobile rental agencies; vehicle-intensive businesses; and wholesale business and storage warehouse uses.”

Existing properties will be grandfathered, and will only be impacted if they look to expand their operations in one of the uses identified as not supportive of transit-oriented development.

The former Bally’s Total Fitness property at 1031 New Britain Ave. was sold in October to A Storage Solution LLC, and a plan for a self-storage facility on that property has already been approved by the town and will not be impacted by the moratorium.

Longtime Elmwood Business Association President Rick Liftig, who owns a dental practice in Elmwood, provided some historical perspective on the existing Traditional Neighborhood Design (TND) overlay zone. TND was crafted and approved for the Elmwood area roughly 20 years ago, also following a moratorium, at a time when numerous area properties were for sale.

According to the town’s current POCD, “The purpose of the TND is to encourage the development of fully-integrated, mixed use, pedestrian- oriented neighborhoods intended to support sustainable, long-term development which will enhance quality of life to ensure the highest possible economic and social benefits for all residents,” but Liftig said while it was good in theory, it failed to have the intended effect on development. He said he hopes that any legislation that follows this moratorium will be more effective and said it’s a good idea to revisit ordinances on a regular basis.

Liftig said there are only a few “blank slates” left in town, and expressed support for the moratorium in order to approach development carefully. While he said he favored the moratorium, he also cautioned that a “transit line can become a uniter or a divider,” and suggested looking at development in conjunction with the City of Hartford.

David Chmielewski, owner of Directline Media and president of the Design District of West Hartford, spoke on behalf of the association which includes businesses in the affected zone. He said he moved his own office to New Park Avenue because he appreciates that the area is “industrial, eclectic, and diverse,” and expressed concern the the town is looking to make it conform to the vision for the Center and Blue Back Square.

“The New Park Avenue corridor is a very different part of town and very industrial,” Chmielewski said, with a variety of businesses that provide support for the people of West Hartford.

Chris Conway, executive director of the West Hartford Chamber of Commerce, submitted a letter to the Council on behalf of members who expressed concern with the length of the moratorium, and suggested it be reduced from nine to six months.

While Hart and Dumais both said they thought it would be possible to complete the work of developing a new ordinance during a six-month moratorium, Cantor suggested, and other Council members agreed, that particularly in the midst of a pandemic and when there is little redundancy in staff, it might be difficult to do the work in six months.

“Moratoriums serve a purpose so we don’t have things happen for the next 30-50 years that are not good for the town or consistent with the POCD,” Cantor said.

“We really have an ability to transform an area of town,” Minority Leader Lee Gold said. While he said he has some concern about restrictions to permissible businesses, he expressed confidence in the staff to move with clear intent.

“The moratorium is designed to provide us with time to review ordinances regarding transit-oriented development,” Hart said, and it’s a recommendation that is part of the POCD. He said own staff will plan to work in a “collaborative, iterative, and interactive way.”

Cantor said the area is a regional destination, and the town’s existing zoning, including the TND overlay, is not promoting development like officials had hoped.

“We would like to make sure that we have the flexibility to do this right,” Cantor said.