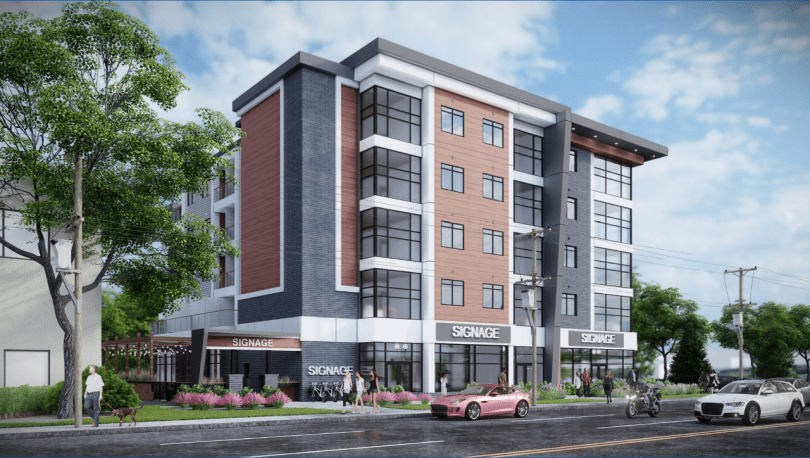 Developers plan to submit a proposal for 920 Farmington Avenue to the Town of West Hartford this week. 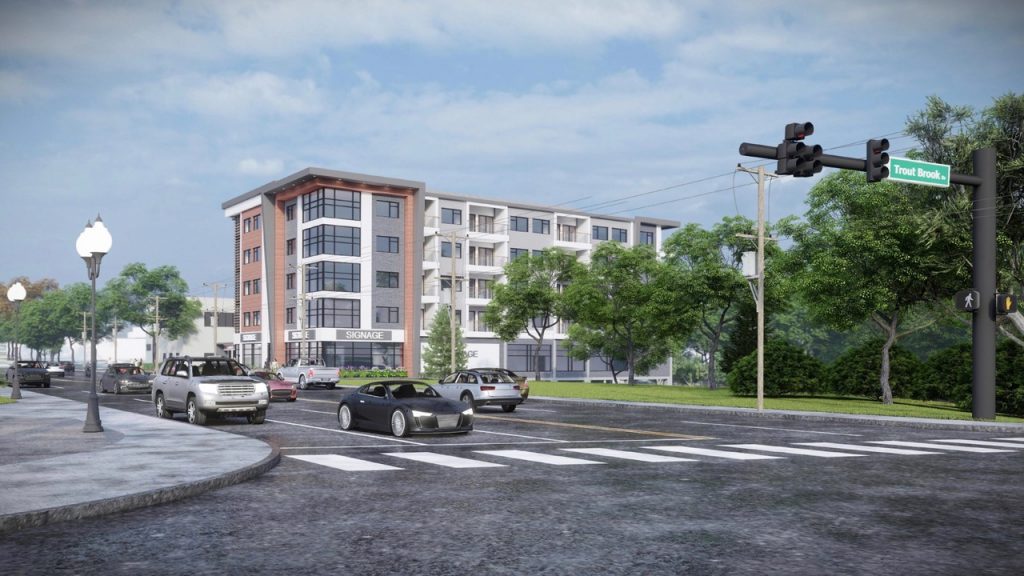 Plans for 920 Farmington Avenue, a transformational mixed use project that the developer sees as the gateway to West Hartford Center, will be submitted to the town for consideration this week, with the hope of having the project ready for move-in by the spring of 2023.

The location is on the north side of Farmington Avenue, adjacent to Trout Brook, and the first building west of the intersection with Trout Brook Drive.

The proposed five-story building will include ground floor commercial occupancy – either retail or office – and four upper floors with a total of 48 luxurious rental units. The plan is for 40 one-bedroom units and eight two-bedroom units.

The square footage will be just under 50,000, and the proposal also includes 57 parking spaces, 20 of which will be covered. A large outdoor area to the west of the building entrance will measure roughly 1,000 square feet and will serve as an attractive amenity for the residential and commercial tenants.

Units that face east will have a view of Trout Brook. 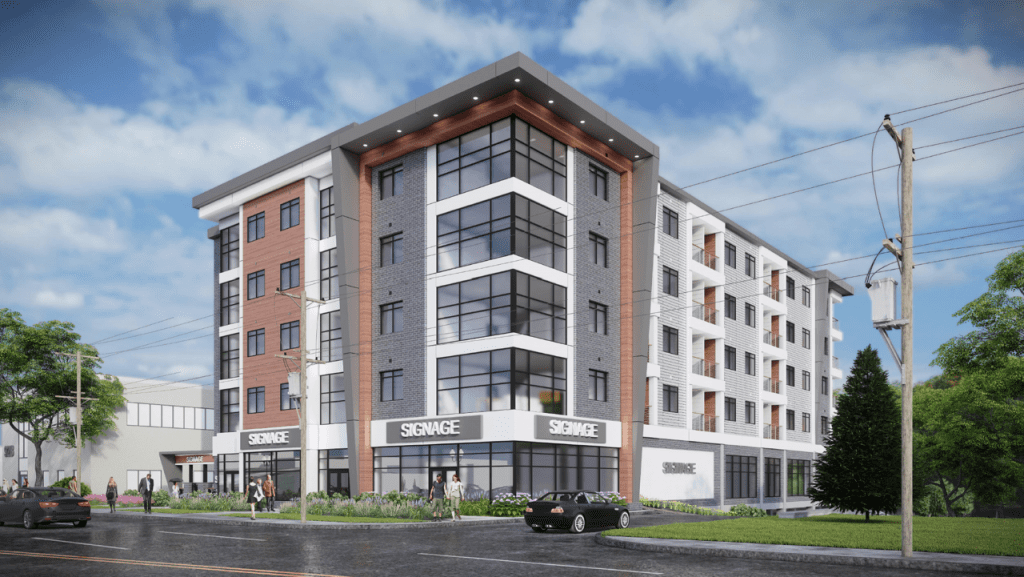 Just over a year ago, We-Ha.com reported on the purchase of two adjacent parcels at 920 and 924 Farmington Avenue, totaling just under an acre, by Farmington Avenue Acquisitions LLC for a total of $1,609,892. That organization is a partnership between Brian Zelman, a West Hartford resident and owner of Zelman Real Estate on LaSalle Road, Avner Krohn, chairman and CEO of Jasko Development, and long-time developer and West Hartford resident Richard Korris.

“We’re very excited,” Zelman said Thursday. “We’ve taken a lot of time to think this through.”

The town’s Design Review Advisory Committee (DRAC) has already met with the developer through informal meetings and provided feedback prior to submission of the application. “We’ve accommodated almost all of that,” Zelman said.

“The location is in a very critical position with regard to entering West Hartford Center,” he said. “We’ve made sure that the design, its elements, and the materials are on par with what’s expected.”

Krohn said the exterior elements will all be high grade finishes. “And the high-end exterior will carry through to the interior.”

Korris stressed that the ground floor will definitely not be a restaurant, due to parking requirements as well as exhaust, but rather office and/or retail. He said they have already engaged in limited discussions with possible tenants.

“This is a very unique branding opportunity … at the gateway to West Hartford Center,” Korris said.

Wetlands applications were filed last Friday, and entire proposal is set to be submitted Friday. The project will be officially reviewed by the Town Planning and Zoning Commission as well as DRAC as part of the submission to the town. A Special Development District, along with a zone change to Central Business District-High Intensive (CBDH) will be requested, and Zelman said he hopes to have the project before the Town Council by late January. While the parcels are both currently occupied by office buildings, built in 1954 and 1961, the zoning is technically multi-family residential.

There is no requirement for the affordable housing component, but Chuck Coursey of Coursey and Company, who is assisting the developer with the submission, said they felt it was critical to include as part of the plan.

The project is estimated to generate $300,000 in tax revenue, the developers said. The current occupancy generates $60,000 for the tax rolls.

“We’ve all been intimately involved in every aspect of the design,” Zelman said. “These will be the nicest rental units in West Hartford,” he said, and will include state-of-the-art technology and security.

The developers have employed an energy code consultant, and plan to exceed requirements. Charging stations will be provided in both the covered as well as outside parking areas.

Pending approval of the application, the goal is to begin demolition of the existing buildings by early spring, with the project completed the following year.

Korris said most of the existing tenants in 920 and 924 Farmington Ave. have already vacated, and were given plenty of notice. The occupancy rate was not high to begin with, and the existing buildings, which are more than 60 years old, had plenty of deferred maintenance, the new owners said. 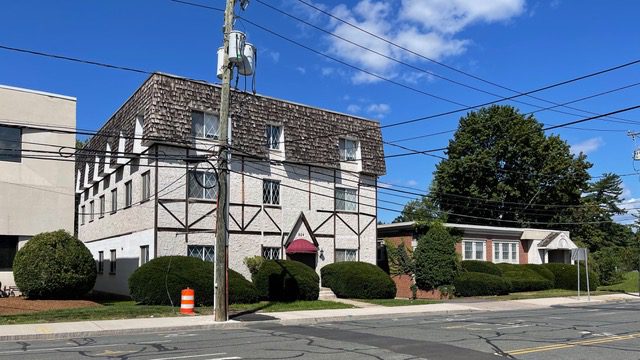 Existing buildings at 924 (left) and 920 Farmington Ave. will be razed to make way for a new proposed development. Courtesy of Farmington Avenue Acquisitions LLC 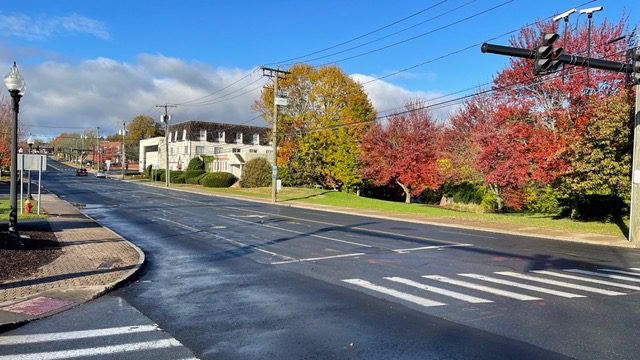 Krohn said the building does not yet have a name, but that’s in the works.

Rental rates have not yet been set, and will be determined once the project is underway.

Krohn said they purposely did not plan a gym in the building because they want residents to support local businesses.

“The real amenity is West Hartford Center and Blue Back Square,” Coursey said. This project meets the goal of being able to walk to multiple gyms, restaurants, the grocery store, the bank, he said, “to be able to live, work, play, and shop without jumping into your car.”

The approach to West Hartford Center headed west from Farmington Avenue, is the primary gateway to the Center, the direction from which the most people enter, and the new development will be one of the first things they see.

Krohn said this project will be a great example of urban infill, “replacing dilapidated buildings and access to the Center.” They’ve take a lot of time to plan every detail, he said, and the goal will be to blend into and be a major part of the West Hartford community. 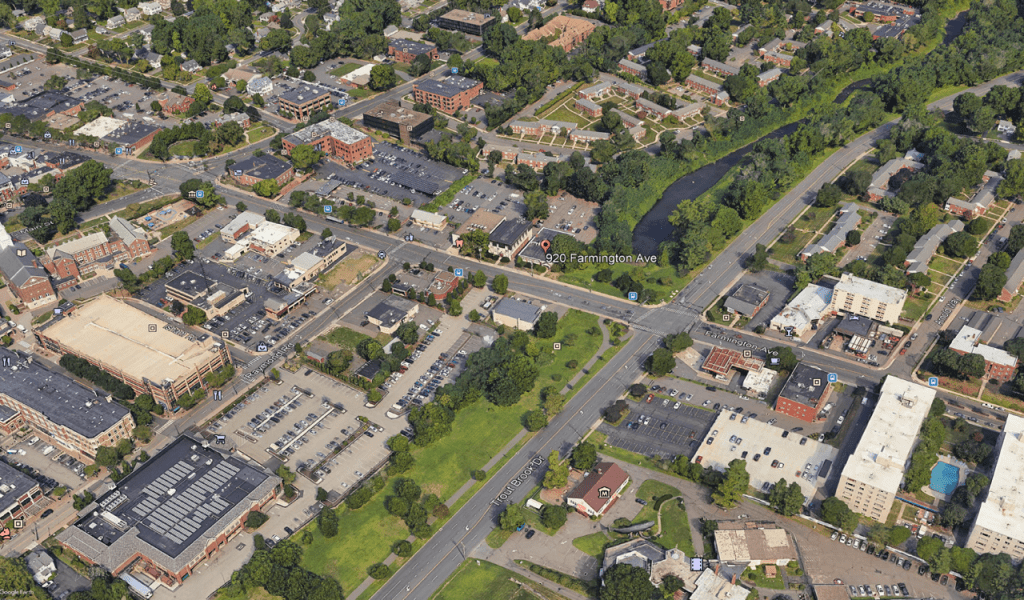