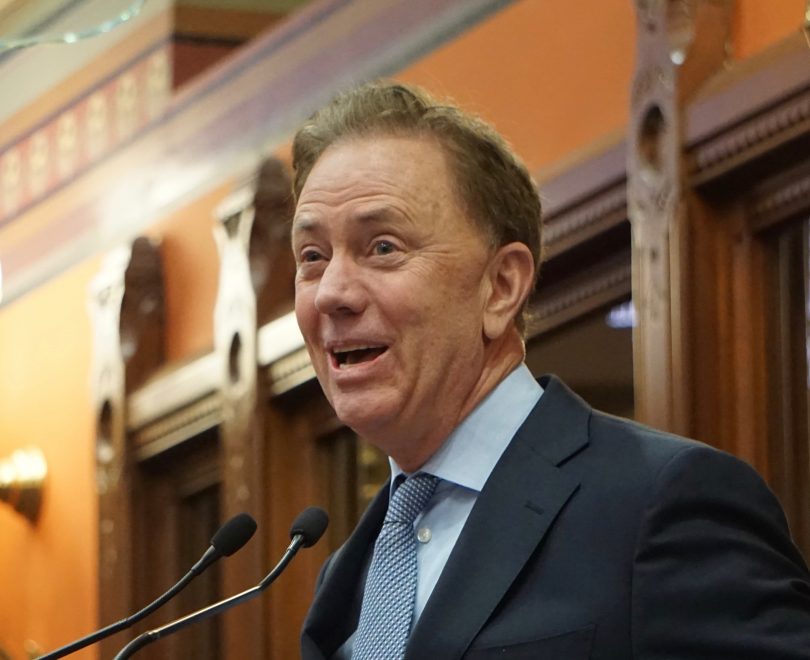 Gov. Ned Lamont delivered a pep talk, conversational throughout and self-deprecating at times, challenging lawmakers: ‘No more badmouthing the state of Connecticut.

An upbeat Gov. Ned Lamont used his second State of the State address Wednesday to cast his uneven first year in office as a success, crediting his administration and lawmakers for controlling taxes and spending, winning unfamiliar Wall Street accolades for record budget reserves, and taking steps to streamline Connecticut’s government.

His midday address to the General Assembly on the opening day of its three-month, 2020 session highlighted victories overshadowed by his continuing and often all-consuming campaign to win passage of a truck tolls bill central to his 10-year, $19 billion transportation financing plan.

Connecticut remains burdened by one of the nation’s worst unfunded pension liabilities and its economic growth has lagged nearly every other state. But its growth cracked the top half of states in the third quarter of 2019, credit rating agencies published the first positive credit outlook in 18 years and the Wall Street Journal offered a whiff of editorial praise.

“The state has dug a deep hole – maybe it now has stopped digging,” Lamont said, quoting an editorial written after he visited the paper’s editorial writers and asked them to give a second look at a state under new management. Lamont shrugged at faint praise, smiled, and puckishly said, “Hey, it’s the Journal.”

For the second year, the governor gave less a formal address than a pep talk, conversational throughout and self-deprecating at times. He challenged fellow Democrats and minority Republicans to join him in promoting a state ranked highly for its quality of life and productive, well-educated work force – attributes offset by decades of anemic job and wage growth and, more recently, population loss.

“Alright, Connecticut, we got our mojo back,” he said.

He highlighted global tech companies like Infosys and GalaxE.Solutions that have opened innovation hubs in Hartford, as well as bioscience growth in the New Haven area and the WWE expanding with digital production facilities in downtown Stamford. At his prodding, he said, a coalition of business, education and labor leaders are producing a template for a more responsive workforce development system.

Lamont offered no sweeping second-year initiatives, instead promising to continue building on the modest foundation laid last year: A two-year budget that promised fiscal stability to businesses and municipalities – delivered on time with no significant tax increases  or jarring cuts in state aid to municipalities.

“Thanks to our partnership, the state of our state is strong, and it’s getting stronger,” Lamont told lawmakers at the top of his 43-minute speech, pausing for applause in a joint legislative session dominated by his fellow Democrats. “But we’re still getting started. We have a long way to go.”

The State of the State was the antithesis of the State of the Union delivered the previous evening by President Donald J. Trump, who claimed singular credit for the U.S. economy as he kicks off a 2020 re-election campaign. (Talking points distributed Tuesday night by the White House portray Connecticut as booming under Trump.)

Trump’s night began with him refusing to shake the hand of House Speaker Nancy Pelosi, D-Calif., and ended with Pelosi tearing up a copy of his speech as she stood behind the president. Lamont eschewed partisan politics and opened with a teasing congratulatory message to House Minority Leader Themis Klarides, R-Derby.

Klarides recently became engaged to Gregory Butler, the executive vice president and general counsel of Eversource, and the governor called it a “public-private partnership” everyone could applaud. And in the Connecticut House chamber, they did. 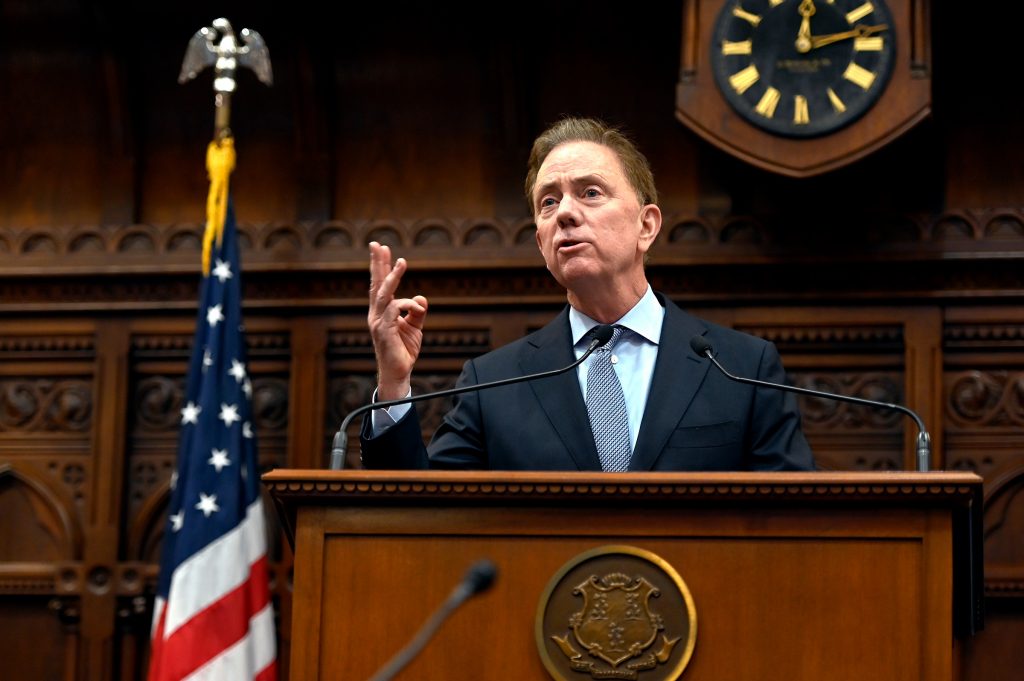 Gov. Ned Lamont started off the 2020 legislative session with his State of the State address at the State Capitol on Feb. 5, 2020 in Hartford, CT. Photo credit: Joe Amon/Connecticut Public (Courtesy of CTMirror.org)

Lamont credited lawmakers with helping him reset the state’s relationship with the business community, especially its hospitals. With bipartisan support, the administration settled the hospitals’ lawsuit over a hospital provider tax.

“Results matter. We’ve shown government can work for the people. I’m proud of what we were able achieve together,” Lamont said.

The governor name-checked key members of his administration who worked on the settlement and are working to modernize state government by placing many functions on line. He wrapped a compliment to Bongi Magubane, the African-born commissioner of motor vehicles, around what could be taken as a dig at the Trump administration’s animus to immigration.

“She used operations research to cut wait times in half,” Lamont said. “By the way, Bongi is one of the many immigrants whose success is Connecticut’s success: She moved here from South Africa fleeing apartheid, speaking only Zulu, graduated from UConn, rose to the top tech position at Aetna, and is making DMV work for you. Thank you, Bongi.”

Lawmakers on both sides of the aisle applauded.

Lamont, 66, a Democrat and wealthy Greenwich businessman who self-funded his successful 2018 campaign, entered the Hall of the House with one of the lowest approval ratings of any U.S. governor. All 151 House and 36 Senate seats are on the ballot in November, but his four-year term runs through 2022.

He hopes to win passage next week of legislation authorizing tolls on tractor trailers at a dozen highway bridges, despite the opposition of every Republican, who are outnumbered by Democrats 22-14 in the Senate and 91-60 in the House. Lamont called the bill crucial to making transportation improvements necessary for economic growth.

“That’s the elephant in the room,” Lamont said, one of his frequent departures from his prepared remarks. “We know if we don’t speed up, our economy is going to slow down.”

Lamont noted that everyone seems to agree on the need for the highway, bridge, and commuter projects outlined in his 10-year blueprint CT2030, just not how to pay for them. He smiled at Senate President Pro Tem Martin M. Looney, D-New Haven, and said, “We can do it right now. Can I have a show of hands?”

Legislators laughed. As he exited, Lamont stopped and briefly chatted with Looney.

As promised last fall, Lamont told lawmakers he would propose legislation preparing Connecticut to join Massachusetts and, most likely, New York and Rhode Island in a regional approach to the sale and regulation of recreational marijuana. But his bill essentially calls for a study, and he does not see a final vote on legalization before 2021, sparing lawmakers an election-year vote on pot.

“Coordinated regional regulation is our best chance to protect public health by displacing illicit sellers with trusted providers. And it’s an opportunity to right the wrongs of a war on drugs that disproportionately impacted our minority communities.” Lamont said, winning applause. “Right now, you realize what you can buy legally in Massachusetts could land you in prison here in Connecticut for up to a year. We just marked the 100th anniversary of prohibition. How did that work out?”

The governor reiterated his support for legalizing sports betting, but he has no plans to submit a bill this year. Unable to craft a deal with the tribal owners of Foxwoods Resort Casino and Mohegan Sun, who are claiming exclusive rights to sports wagering, Lamont has declined to make public what he sees as a fair way to proceed, apparently opting to continue private talks.

“I want to work with you to ensure we stand up a responsible sports betting platform that promotes economic growth for our state and is fair to our tribal partners,” Lamont said. “Together, let’s work to ensure Connecticut isn’t left behind as our neighboring states continue to move forward on gaming while also avoiding endless litigation.”

Lamont pledged to curb health care costs, saying Connecticut should allow the importation of cheaper prescription drugs from Canada. He said he was learning from watching Charlie Baker, the Republican governor of Massachusetts, and Connecticut’s comptroller, Democrat Kevin Lembo.

Without proposing new initiatives, Connecticut will continue to work with neighboring states on fighting pollution and climate change, he said.

“The White House may not believe in climate change, but you know who does? The Navy,” Lamont said, noting that the commander of the U.S. submarine force recently told him that the one of the attributes of the naval base in Groton is that major portions of the base already are protected from rising sea levels. “It seems a little ironic to me, but if submarines are worried about rising tides, so should we.”

Lamont said Connecticut stands in contrast with the political dysfunction in Washington.

“We are proud that you call Connecticut home ,and every day we will work to earn your faith in our great state,” he said. “We are just getting started. We are much better off when we work together.”

Klarides complimented the governor for keeping municipal aid stable and proposing a budget that calls for adding up to 170 state troopers to replace retirees.

“I loved the [idea of] being the champions of Connecticut,” Aresimowicz said. “At some level we all raise our hand and take an oath of office and we’re going to not only observe the Constitution but we’re going to act in the taxpayers’ behalf. And every time that you say that you can’t trust government, that’s a direct slap at the people’s trust in the government. We need to be out there and start talking positively about Connecticut.”

“I think the tone was terrific, talking about the need for unity in Connecticut. The need to stand up against bigotry and prejudice. I think it was exactly the right optimistic speech for the state to have us start the session in the right tone,” Looney said.

Senate Minority Leader Len Fasano, R-North Haven, noted what he did not hear from the governor, who ran in 2018 on a promise of delivering $165 million in property tax relief in his second year.

“What I didn’t hear was the relief to middle-class taxpayers,” Fasano said.  “I wish we saw something to ease the pain of the people living in the state of Connecticut.”

The administration says that tax cut is not yet affordable.

Keith Phaneuf and Kelan Lyons contributed to this story.