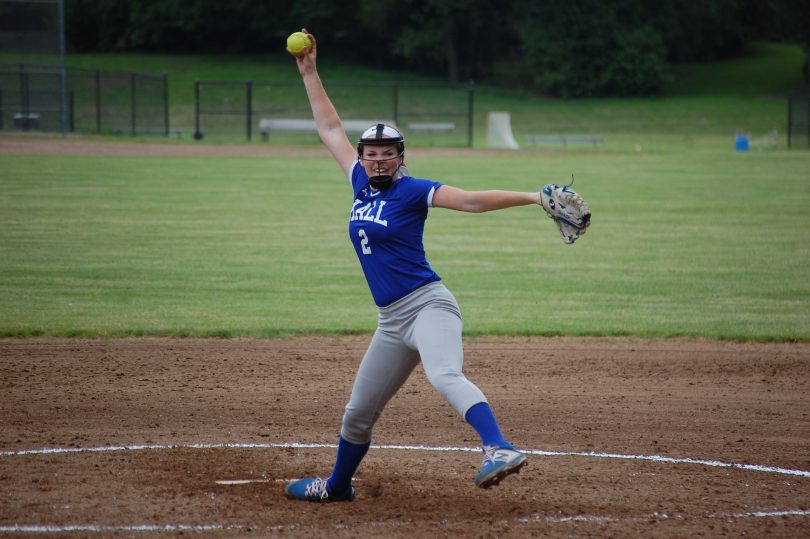 Hall pitcher Sophie Garner-MacKinnon was one of five freshmen in the starting lineup for the Warriors this spring. Photo credit: David Heuschkel

West Hartford’s Hall High School had a talented but young team that led them to the state tournament, and their coach is very optimistic about the future.

They’ll be back. And rest assured, the Hall High softball team won’t have to wait six years to play in the state tournament again.

“That’s what I said to the girls. We’ll be back here in the state tournament,” Hall head coach Rebecca Lewis said in the aftermath of a 9-5 loss to Glastonbury in the first round of the Class LL tournament May 29 in West Hartford. “We just got to keep working hard.”

Making their first appearance in states since 2013, Hall finished 13-8. It was the most wins by the Warriors in a season since the 1994 squad went 14-5. It had also been 25 years since Hall played a state tournament game at home.

From four wins a year ago to 13 this spring, the Warriors were one of the most improved teams in the CCC.

“We’ve started to make a name for ourselves,” Lewis said. “We have a great freshmen group that is going to continue to grow.”

Of the 17 players on Hall’s state tournament roster, nine were freshmen and two were sophomores. Of the 29 teams that qualified for the Class LL tournament, none had as many freshmen as the Warriors.

“Coming in this year, we knew we had a great freshman class,” said Lewis, who took over as head coach last spring. “We knew some of it was a bit of raw talent and we knew we could definitely make states. So that goal was set.”

The goal was achieved May 1 with a 1-0 win over Conard, the first time the Warriors beat their crosstown rival in 10 years.

There were several other signature moments for Hall. The Warriors extended their winning streak to eight games with a 7-6 win in 12 innings over Avon, another young team on the rise.

There was a 4-3 win over Manchester in which Hall overcame a three-run deficit. The next day against Southington, the Warriors erased a three-run deficit in the seventh to force extra innings before losing to the perennial power Blue Knights 7-6 in the eighth.

In the state tournament loss to Glastonbury, the Warriors gave up two runs in the top of the first and responded with three in the bottom half.

“We continued to battle, we continued to compete,” Lewis said. “We’re never out of the fight. As long as we still have an out, we’re still breathing, we’re still living. We can still make something happen. We’ve done that multiple times this year.”

Glastonbury took a 5-4 lead with two runs in the fourth, scored a run in each of the next two innings, and added two in the seventh.

“You got to give it to Glastonbury. They’re an outstanding program, solid all around,” Lewis said.

Lewis, an eighth-grade teacher at King Philip, somehow found time to coach three teams at Hall last year – soccer in the fall, basketball in the winter, softball in the spring. In addition she runs programs for sixth- and seventh-grade students at KP.

When it got to be too hectic, Lewis decided to step away from coaching basketball this past winter because there was little time between the end of the hoop season and the start of the softball preseason.

“It was really rewarding to end this way after the four years,” said Hall senior shortstop Marissa Lazinsk, who played softball all four years. “Our first two years before we had Coach Lewis, we struggled a lot. So we kind of got like ‘this is the culture of Hall softball.’ And then Coach Lewis came on and we changed that culture, but we didn’t necessarily have all the talent we needed. This year was really great to kind of put it all together.”

“I feel like we left our mark,” said center fielder Megan Polun, one of three seniors on the team. “That was the thing we wanted to accomplish: to be a stepping stone for the rest of the program.”