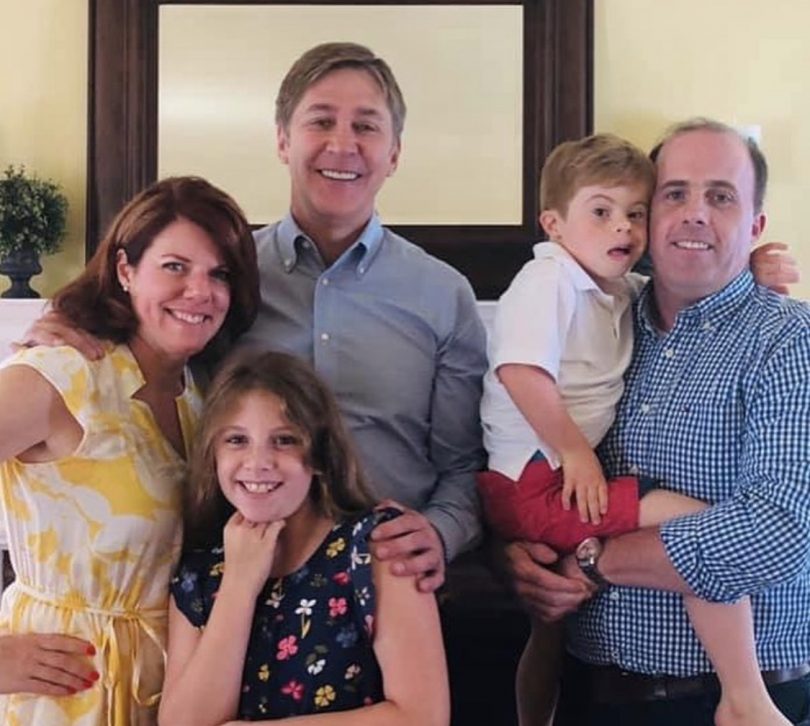 Steve Hartman (back row, second from left) with the Daly family. From left: Brooke, Rosie, Finn, and Kevin. Courtesy of WFSB

‘On the Road’ with Steve Hartman on CBS will air a story about the bench that West Hartford resident Todd Disque made for 6-year-old Finn Daly.

Finn Daly, a 6-year-old West Hartford resident, has Down syndrome and is on the autism spectrum, and loves things that wave – like flags.

WFSB recently reported on Finn’s fascination with a particular flag on Garfield Road, and the act of kindness that ensued.

On walks through the neighborhood with his family, Finn would sit on the ground and gaze at the American flag flying on Todd Disque’s house.

Disque told WFSB that when he found out about Finn’s fascination, he decided to make a bench for the boy, to make it easier for him to sit and look at the flag. Not just a bench – but a bench lettered with the words: “Finn’s Bench.”

The Daly family was overwhelmed with emotion.

The story of this simple act of kindness has been viewed more than 9 million times on the station’s website, anchor Dennis House said.

It caught the attention of CBS’s nation news team, and Steve Hartman from “On the Road” came to West Hartford last weekend and interviewed the Disque and the Daly family. The story will air Friday, Aug. 2, at 6:30 p.m., on the CBS Evening News, and can be viewed locally on WFSB.

Brooke Daly said on her Facebook page that being interviewed for the national news story was “an awesome and surreal experience … We are beyond grateful to share this story of kindness.”

Click here to watch the original story on WFSB.