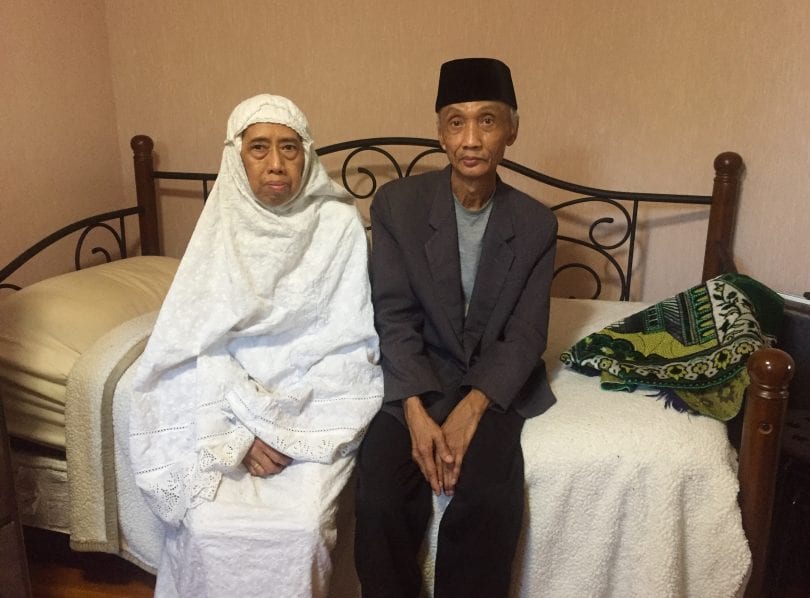 Dahlia and Sujitno Sajuti in their room at the Unitarian Universalist Church in Meriden, where they have been living since Sujitno sought sanctuary since October 2017. Photo credit: Ronni Newton (we-ha.com file photo)

Sujitno Sajuti left the Universalist Unitarian Church in Meriden Friday for the first time in more than 19 months.

Accompanied by U.S. Sen. Richard Blumenthal and other supporters, West Hartford resident Sujitno Sajuti stepped outside the door of the Unitarian Universalist Church in Meriden Friday and was free to head home to West Hartford.

Sajuti had not left the church, had not even gone outside, since Oct. 10, 2017, when he sought sanctuary after being ordered to leave the United States and return to his native country of Indonesia.

Blumenthal said Friday that authorities have determined that Sajuti’s application for a U visa has been recognized as applicable, which will allow him to remain in the United States. He has been granted deferred action by U.S. Citizenship and Immigration Services and Immigration and Customs Enforcement (ICE) has indicated that it will no longer seek to deport him.

A U visa can be granted to those who are the victims of certain crimes. Although the specific nature of the what happened to Sajuti was not revealed, Blumenthal said that it was substantiated by the Hartford Police Department.

“He was the victim of a crime,” Blumenthal told We-Ha.com Friday, and although Sajuti was to have been deported, “ironically he never did anything himself.”

The queue for approval for U visas is ordinarily about four years, Blumenthal said, but after pressure from his office and Sajuti’s attorney, ICE agreed to neither detain nor deport Sajuti.

“But for his courage and conviction, he would have been deported,” Blumenthal said.

Sajuti’s wife of 38 years, Dahlia, had been free to come and go but spent most of the past 19-plus months with her husband at the Meriden church.

Sajuti, 70, a medical anthropologist with several master’s degrees, had not been in Indonesia since 1989, when he came back to the United States to further his education. In 1981 he came to the United States for the first time to study public health and get his master’s at Columbia University.

A former Fulbright scholar, Sajuti had overstayed his student visa but was registered and regularly checked in with Immigration and Customs Enforcement (ICE) which had granted a stay of deportation. In 2017, when he reported for his annual check-in, Sajuti’s request to remain in the United States was rejected.

Blumenthal said his office has been working on this case and advocating for Sajuti since 2011.

“He is relentlessly positive, persevering, and calm,” Blumenthal said of Sajuti, a gentle man with a sense of peace and calm.

Prior to seeking sanctuary, Sajuti and his wife had been heavily involved with Hello! West Hartford, teaching people about their Indonesian culture, assisting with continuing education and helping people obtain their GEDs.

When We-Ha.com met with Sajuti last July, when he had been in sanctuary for eight months, Sajuti said he spent most of his time exercising, focusing on religion – and most importantly – staying positive. “I don’t want to hear negative,” said Sajuti at the time. “In times like these you have to be creative, productive, and use your imagination.”

Blumenthal said that when Sajuti stepped outside Friday it was a moment of great joy. Sajuti was happy that he would be able to observe Ramadan in his own home, his own place of worship.

“His faith and voice should serve as inspiration for us to continue to reform the broken immigration system that has resulted in so many cruel and hurtful consequences for so many people,” said Blumenthal.

“I am overjoyed for Sujitno Sajuti, who can finally return home today after 19 long months in sanctuary,” Connecticut Attorney General William Tong said in a statement.

“As much as we’re celebrating today, we should also be angry about our broken immigration system … that forced him to confine himself for almost two years,” Blumenthal said.

Tong shared similar sentiments. “There is something horribly broken with our immigration system that this 70-year-old man who has lived peacefully here for three decades was ever deemed a priority for deportation. This is certainly not a wise use of federal resources. So today, we celebrate this victory for Sujitno and his wife, but tomorrow we get back to work on behalf of so many other families still separated by the Trump Administration’s cruel and irrational deportation regime.”