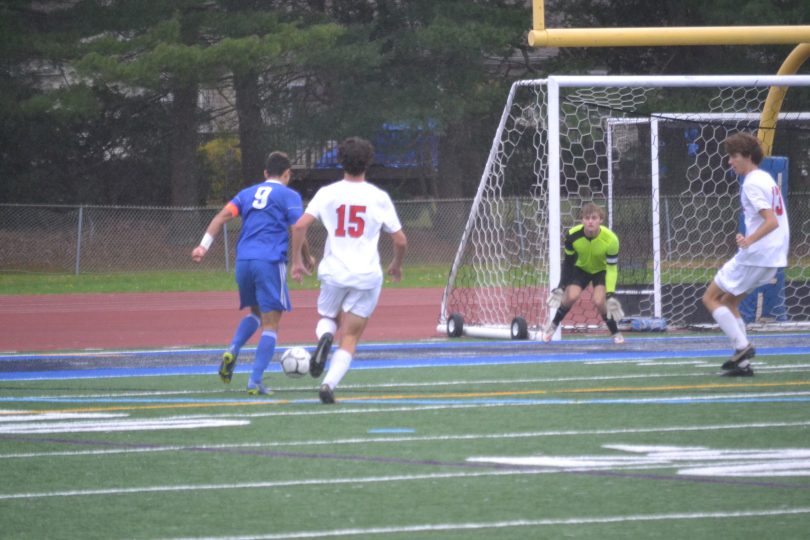 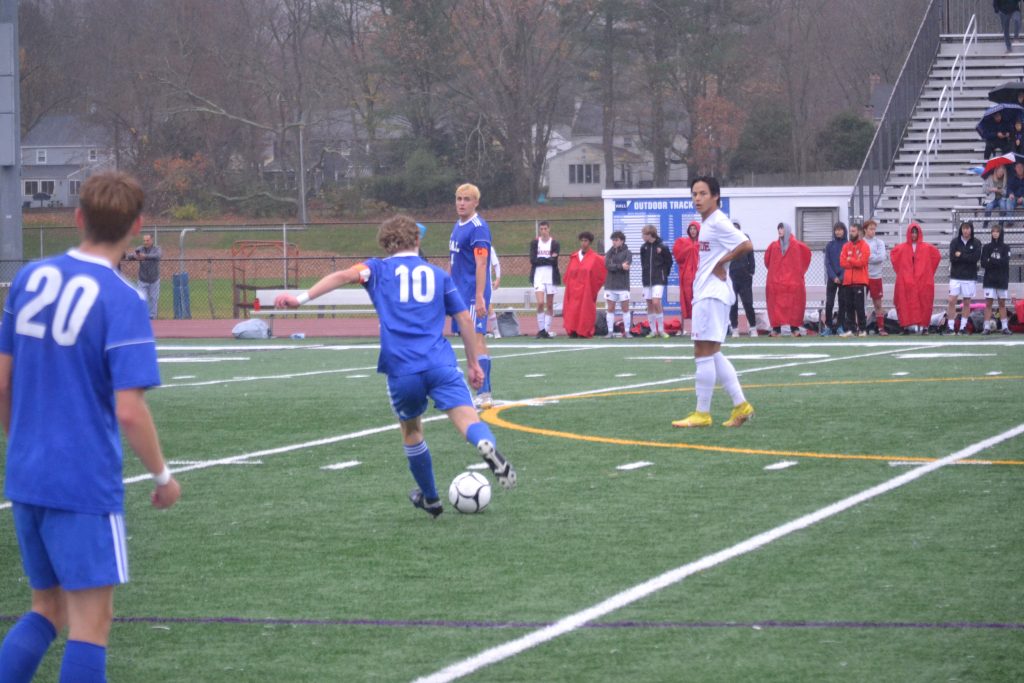 Since 2018, led by head coach Zeke Seguro, the Hall boys soccer team has been building something of a dynasty. After finishing as the Class LL runner-up in ’18, the Titans – then Warriors – won the title in 2019 and lost on penalty kicks to Farmington in the 2021 title game. There was no tournament held in 2020 due to COVID.

For the current 2022 season, Hall is once again heading to the semifinals thanks to four goals from Lucas Almeida and two more from Sam Sandler in the Titans ‘6-3 win over Fairfield Warde on Friday.

“To get to this stage we worked hard,” said Seguro after the win. “It is difficult to get to the Final 4. There are a lot of really good teams who are not playing anymore.”

To get to the next round, Hall had to not only beat a physical opponent, but also the rain that turned from a drizzle early on into a steady flow. Almeida did not get his first touch on the ball until 4:30 had passed in the game, and just under 4 minutes later he would force Warde goalie Brendan O’Hara to tip a shot over the crossbar. “I try to test the defenders early,” said Almeida, who will be going to UConn to play soccer in the fall. “I want to see who I might be faster than and if I have to will switch to that side.” 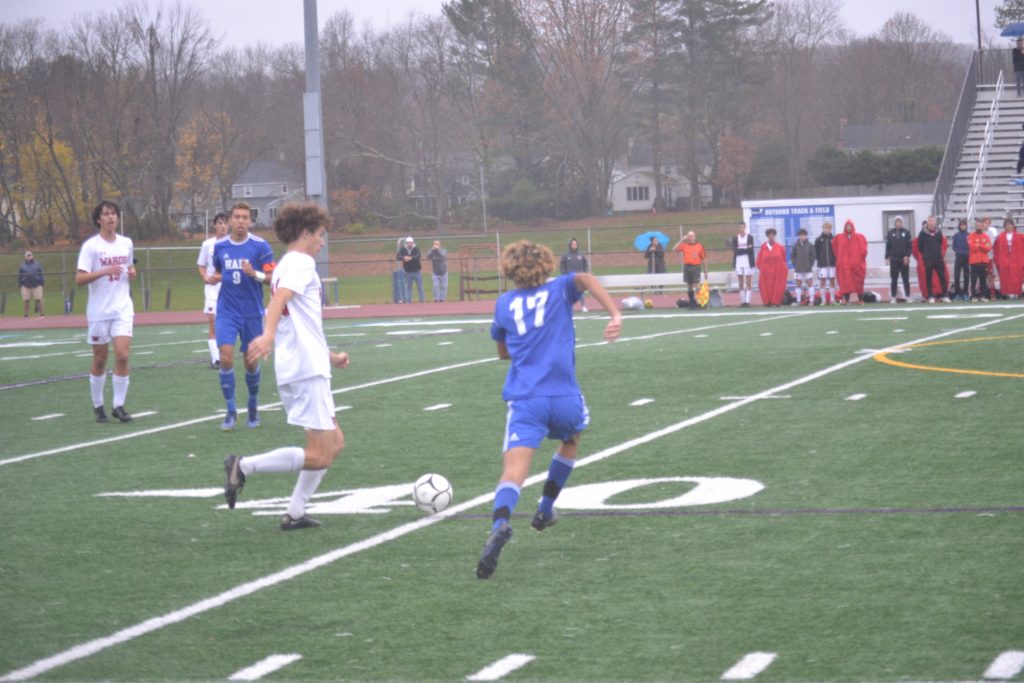 The other speed merchant for Hall, track and field All-American Sam Sandler, would open the scoring with 9:13 played in the first half.  The play began when a ball from Fareed Aburabia crossed the Warde box and came to Sandler, who drove it back across the goal and into the far side of the net. Less than 3-and-a-half minutes later it would be Almeida scoring his first of the day when Sandler found him with a pass and the senior, who holds Hall’s record for goals in a career, added to his total with a blistering shot into the upper corner.

“We came out focused and ready to play today,” Seguro said. “With the weather we wanted to try and take advantage of any dry turf early on.” 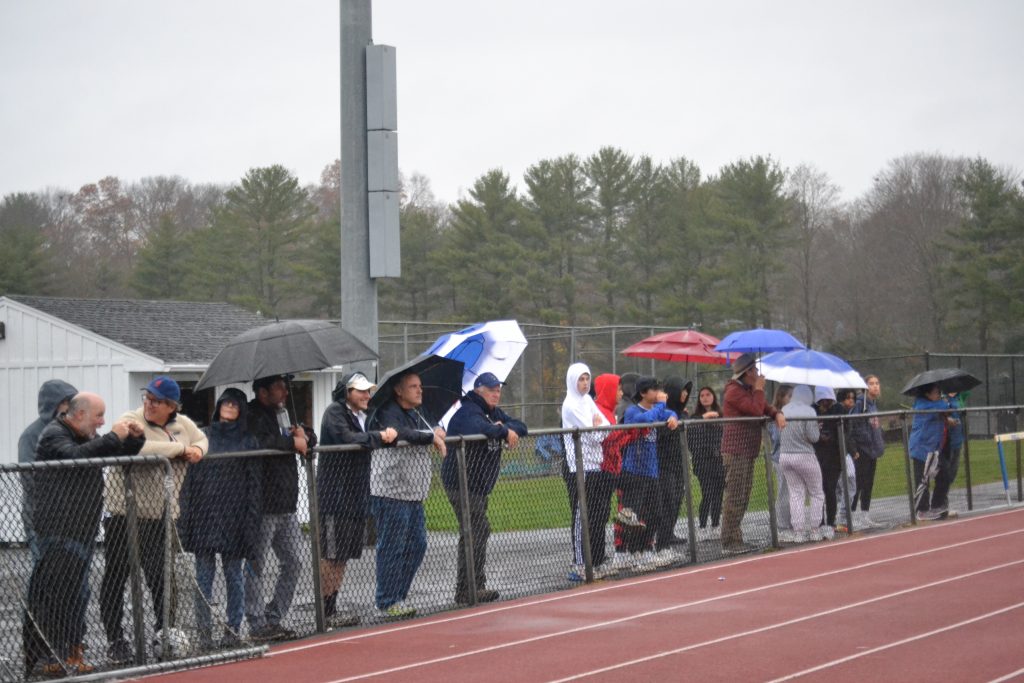 The fate of the visiting Mustangs may have been changed when Almeida  and O’Hara came together while chasing a loose ball. A clearly injured O’Hara was having trouble with his left knee but stayed in the game. The teams would exchange scoring opportunities with Warde firing in some long shots that senior goalie Tyler Fairchild handled.

With just over 4:30 to play, Hall would  get its third goal of the game and it was Sandler doing the honors again off a pass from Aburabia. O’Hara – clearly in distress – could not get to the ball that was ticketed for the corner.

Almeida would make it a 4-0 Titans lead just 28 seconds later when he made a long run with the ball down the left sideline, cut in for a better angle, and then beat O’Hara. At that point it became clear that O’Hara could not continue and he was subbed off. 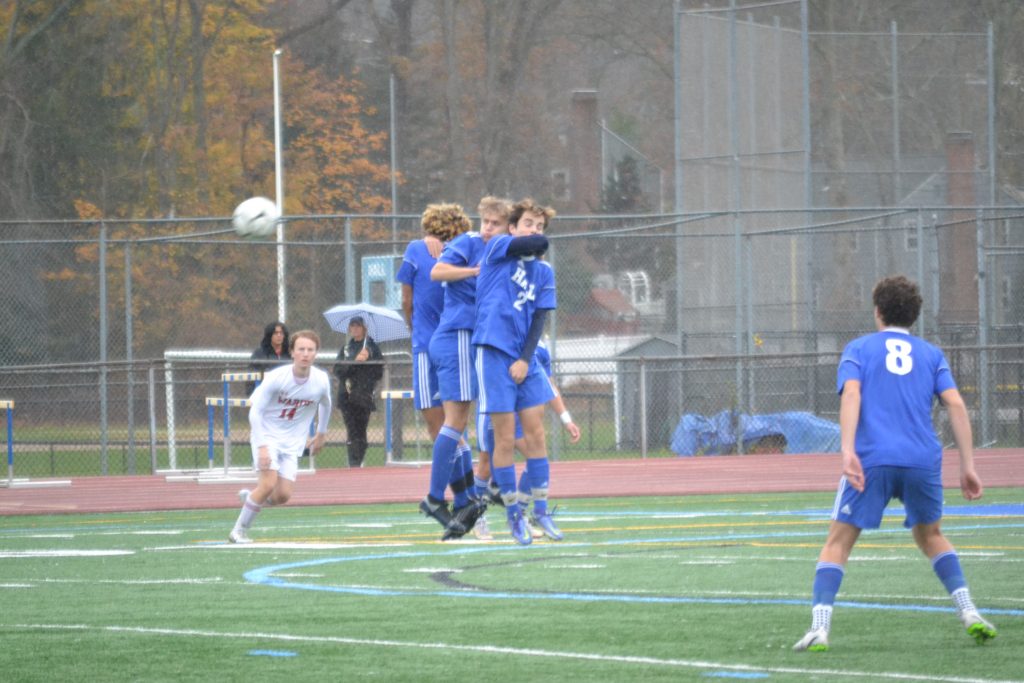 It was a good thing that Hall built up the four-goal cushion, because a combination of factors saw Fairfield Warde chip away starting just 9 minutes in to the second half. Guilherme Pinherio Ramos would convert on the corner. The freshman charged in from the wing and beat Fairchild to a 50/50 and slid it in for the goal.

“We talked at the half, “Seguro said, “about owning the first 10 minutes but we let up a goal.” As a team, Hall looked flat and uninspired in the early part of the second half, but once again the combination of Sandler and Almeida would deliver for the unbeaten hosts.

A clear to midfield by Hall skipped past a Warde defender, Sandler got a touch on the ball, and he and Almeida raced down field before Sandler slotted the ball across and his teammate banged it in to restore the four-goal lead at 5-1.

With the Mustangs failing to give in, play got a bit more physical for both sides. With Warde pressing the attack, the referee called a disputed handball in the box against the Titans and awarded a penalty kick with 18:49 to go. Warde senior Jack Greenwood calmly blasted the ball into the back of the net to make it 6-2.

“That was not the way we wanted to finish the game,” said Hall’s coach. “I wanted to rest some players so I was subbing people in and Fairfield just was never going to give up, we knew that.” The Mustangs would push across another goal with 7:23 to play when a bad touch from a Hall defender sent a free ball into the box and Amos Bignotti managed to knock the ball past a sliding Fairchild who was left with little choice but to try and slide and take up as much space as he could. 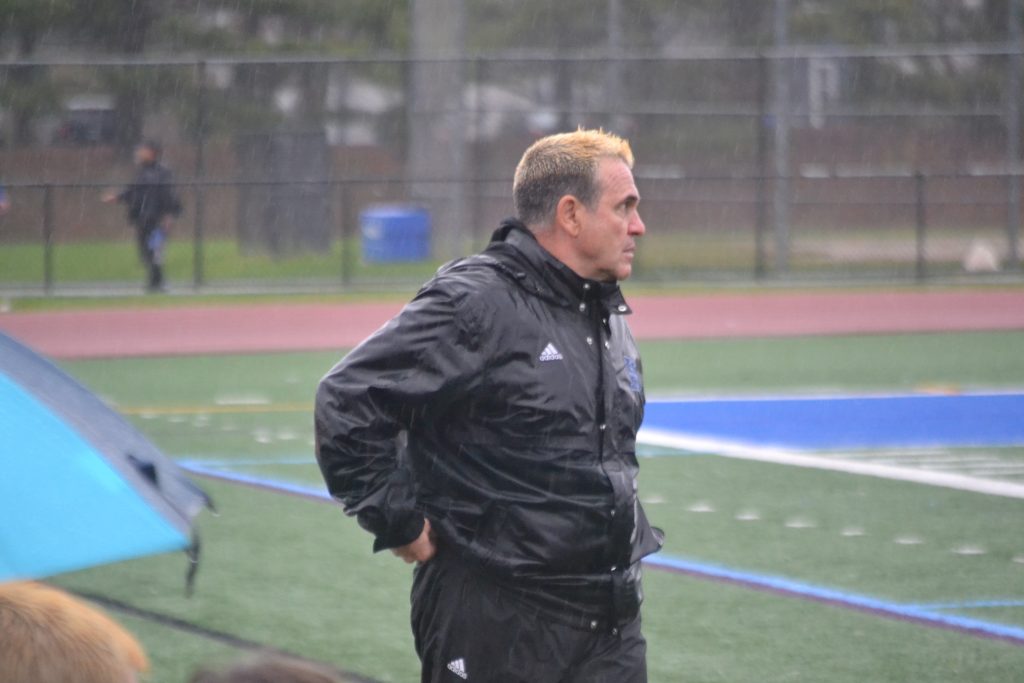 Though the 6-3 win was not the prettiest, it does move Hall into the Class LL semifinals to meet the winner of No. 6 South Windsor and No. 3 Norwalk who play Saturday. “It feels great, “Almeida said after the win, “but we know whoever we play next it will be hard.” Norwalk out of the FCIAC is 15-0-3 with 10 shutouts on the season while the Bobcats of the CCC are 14-2-2.

The date, location, and time of Hall’s semifinal will not be determined until after the South Windsor vs. Norwalk quarterfinal game. It will be at a neutral site and played either Tuesday, Wednesday, or Thursday next week. As the No. 2 seed in Class LL, Hall, now 16-0-2,  is the highest remaining ranked team. The other LL semifinal will be played between No.. 13 Fairfield Prep and No. 16 Greenwich at a time, place, and date to be determined. 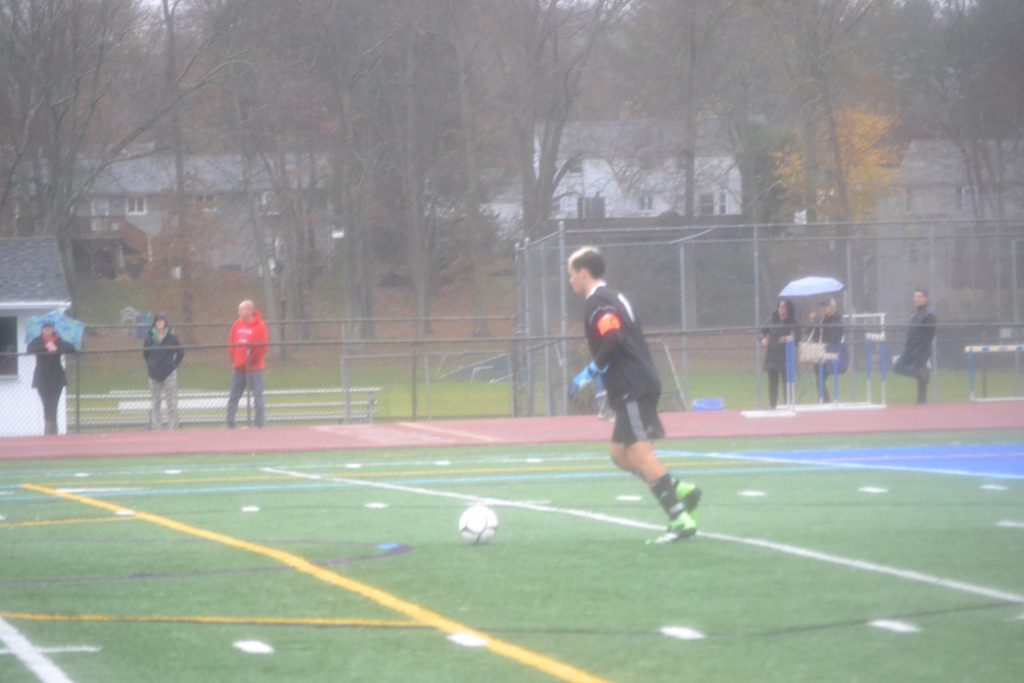