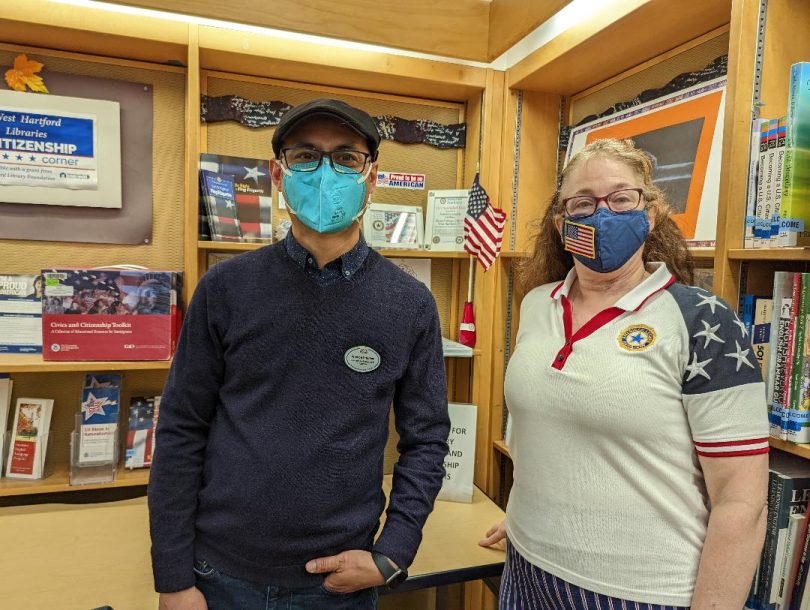 A member of the American Legion Auxiliary Unit 96 has received a grant and will be promoting ‘Americanism’ in collaboration with the Faxon Library.

Elaine Kotler, a member of the American Legion Auxiliary (ALA) Hayes-Velhage Unit 96 of West Hartford, CT, Department of Connecticut 1st District is the Unit’s historian and chair of Education and chair of Americanism.

Kotler received a grant from the National ALA to sponsor “Star Spangled Kids” Americanism – the American Legion Auxiliary initiative to educate our youth about United States history, Americanism, and the U.S. Constitution.

After reaching out to local elementary schools in West Hartford, where Kotler resides, it didn’t seem possible to promote many of the ideas she and other members of Unit 96, including Jeanne Berry, president and Jenn McLeod, vice president, conceived as part of the initiative. Then, she reached out to the Community Engagement Librarian at the Faxon Branch Library of West Hartford Libraries.

Pramod Pradhan recognized a wonderful opportunity to join with the ALA in the library’s “Citizenship Corner.”  Pradhan utilizes a section of the Faxon Library for a “West Hartford Libraries Citizenship Corner” funded by a grant from the West Hartford Library Foundation. Here, residents can get assistance in becoming a United States citizen, where brochures, books, forms, and other materials from the U.S. Citizenship and Immigration Services and other agencies are available.

In the same area, adults and children can pick up items complimentary from the American Legion Auxiliary Unit 96 to promote the Star Spangled Kids Program. These items include comic books, such as “Our Country’s Flag,” “The Pledge of Allegiance,” and “Light of Liberty.” Also available are the American Legion’s Auxiliary “Poppy Coloring Book,” “Let’s Be Right on Flag Etiquette,” “The Flag of the United States, How to Display It, How to Respect It,” pocket copies of the Declaration of Independence & Constitution of The United States of America, and Pledge of Allegiance Bookmarks.

The DVD “For Which It Stands,” about the history of the flag of the United States, the significance and meaning of our flag, and respecting and caring for our flag produced by The American Legion is also available for loan through the library.

Educating our adults and children about American history is extremely important to our country’s civic health and ALA Unit 96 hopes you will stop by the Faxon Library and enjoy any of these complimentary items that inform in an educating and/or entertaining fashion.