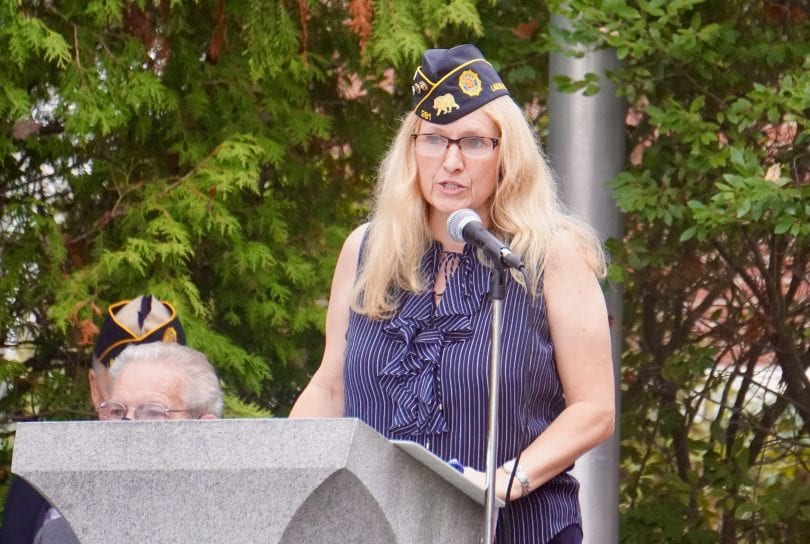 At its Annual Meeting held May 11, 2022, Hayes-Velhage Post 96 elected officers to serve the Post’s 2022-2023 term of office. Heidi-Anne (Aloise) Mooney, who previously served as senior vice commander, was elected as post commander.

In 2022, Hayes-Velhage Post 96 is celebrating its centennial anniversary as an American Legion Post. In her acceptance remarks Mooney challenged Post members to help grow membership. “Gather information on veterans living in a local nursing homes, families with a son or daughter serving on active duty and calls West Hartford their home so the Post can honor them with a free one-year membership and welcome them into our Post family.”

Mooney grew up in Bedford, NY about 45 minutes from New York City, and attended the University of Colorado, Boulder, graduating in 1994 with a bachelor’s degree in environmental conservation. As a member of the University’s Naval ROTC program she applied to switch to the Marine Corps option at the end of her junior year with a presidential application to switch. She originally had not considered the Marines as they had blocked women from serving in combat arms positions. With that block lifted in 1993, Mooney requested the switch from Navy to Marine Corps and received one of six presidential switchovers granted that year. In her senior year she had to make up all her missing Marine classes, graduate, and then attend Officer Candidate School before receiving her commission as a Marine Corps officer in the summer of 1994.

After receiving her commission and completing TBS in Quantico, VA, she was selected as a combat engineer officer, attended engineer training in North Carolina, and in September 1995 she left for Okinawa, Japan as the second female combat engineer officer. She served at 9th Engineer Support Battalion as a platoon commander and then as Company XO, traveling to South Korea and other areas in SW Asia for host nation support engineering and de-mining projects in Cambodia, Laos, and other countries.

She was transferred to the States and as 3rd MAW Engineer Officer and a newly trained HazMat officer, she helped manage engineering projects and supported base realignment and closure of two Marine Airwing bases in Orange County, CA ,and was selected as the protocol officer covering the two generals and stayed in that role through the base closure and a move to the new MCAS Miramar.

Mooney also became a personal trainer and a health promotions coach for MWR and helped to create and develop programming for the entire West Coast in a comprehensive health program for Marines to evaluate seven areas of health and wellness, including mental health, smoking cessation, heart health, suicide awareness, and stress management which earned her a Navy and Marine Corps Commendation Medal. This Semper Fit program was adopted across the USMC. She is also the recipient of several medals, citations, and campaign ribbons.

Mooney moved to West Hartford in 2019 to be closer to her family after 23 years in California. She has a daughter and son at Conard High School and she is an active volunteer in Boy Scouts as an assistant scoutmaster, merit badge counselor, certified angler instructor, and religious emblems chair, and is starting commissioner training. She also volunteers with the Connecticut Girl Scouts Travel Troop and at Calvary Fellowship Church. Her real job is a senior area manager for Boston Heart Diagnostics Lab, covering Maine to Delaware and West Virginia, where she has been No. 1 in sales for the past two years.

The American Legion Post 96 of West Hartford has been serving our Veterans and Community since 1922 and is celebrating its centennial anniversary this year.  The Post is open to all military veterans who have served honorably and military personnel currently on active duty. Further information is available at www.post96.org or by contacting the Post at: Hayes-Velhage Post 96, P.O. Box 370160, West Hartford, CT 06137-0160, Phone 860-233-9029.