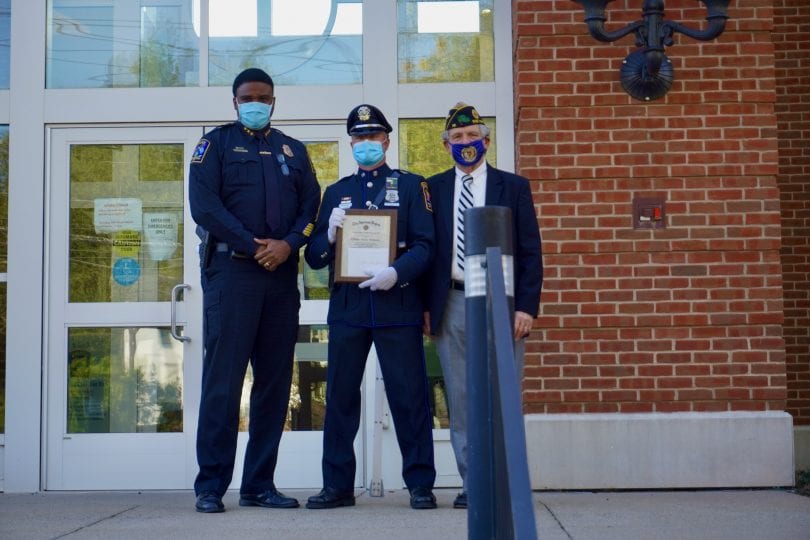 West Hartford Police Off. James Mahoney has been named ‘2020 Police Officer of the Year’ by American Legion Hayes-Velhage Post 96. 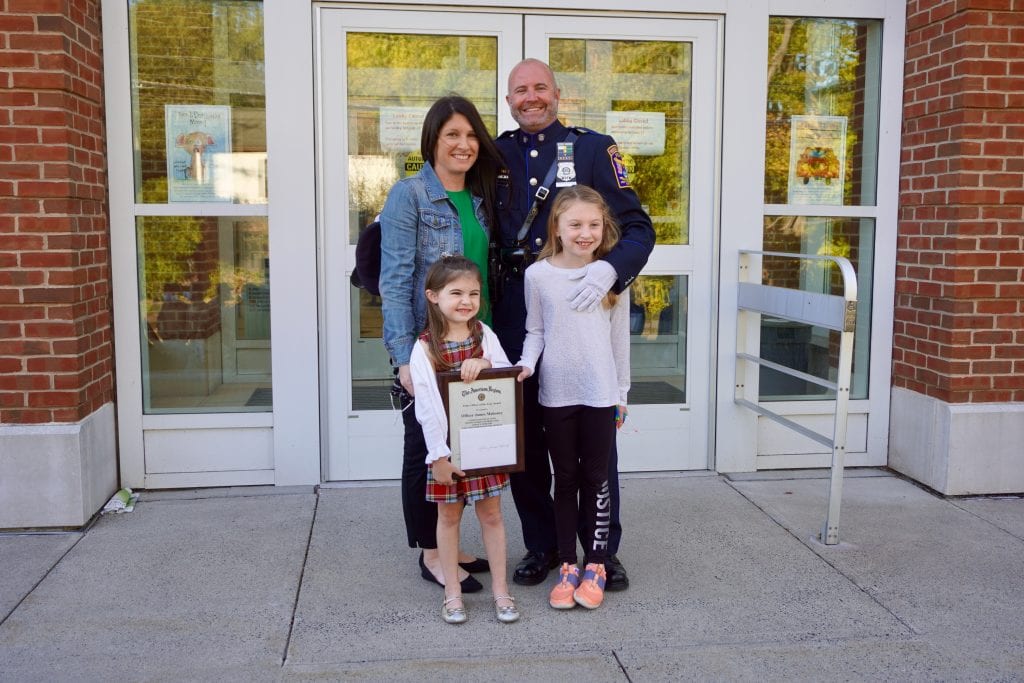 Off. James Mahoney poses with his wife and daughters at the 2020 Officer of the Year Award ceremony. Photo credit: Ronni Newton

Off. James Mahoney has had many positions in his nearly  15-year career with the West Hartford Police Department, and on Nov. 5 received one more title: 2020 Police Officer of the Year.

Patrick Harrell, commander of the American Legion Hayes-Velhage Post 96, presented Mahoney with the award in a ceremony Thursday afternoon, held outdoors on the steps of the police station on Raymond Road.

Post 96 traditionally names a Police Officer of the Year in the spring, and holds a ceremony and banquet, but due to COVID-19 that was postponed. While the banquet could not take place, Post 96 and West Hartford Police Department leadership wanted to honor Mahoney and found a way to safely hold the award ceremony.

Mahoney, who joined the West Hartford Police Department in January 2006 after serving in the U.S. Army – where he completing a combat deployment with the 439th Quartermaster Company in Operation Iraqi Freedom from February 2003 through August 2004 – most recently has been the School Resource Officer at Hall High School.

He has previously been assigned to the Patrol Division, working all three shifts and training new officers as part of the field training operation, and has been a member of the Traffic Division and Community Interaction Team (CIT). He is a 2005 graduate of Western New England College, where he earned a bachelors degree in criminal justice. 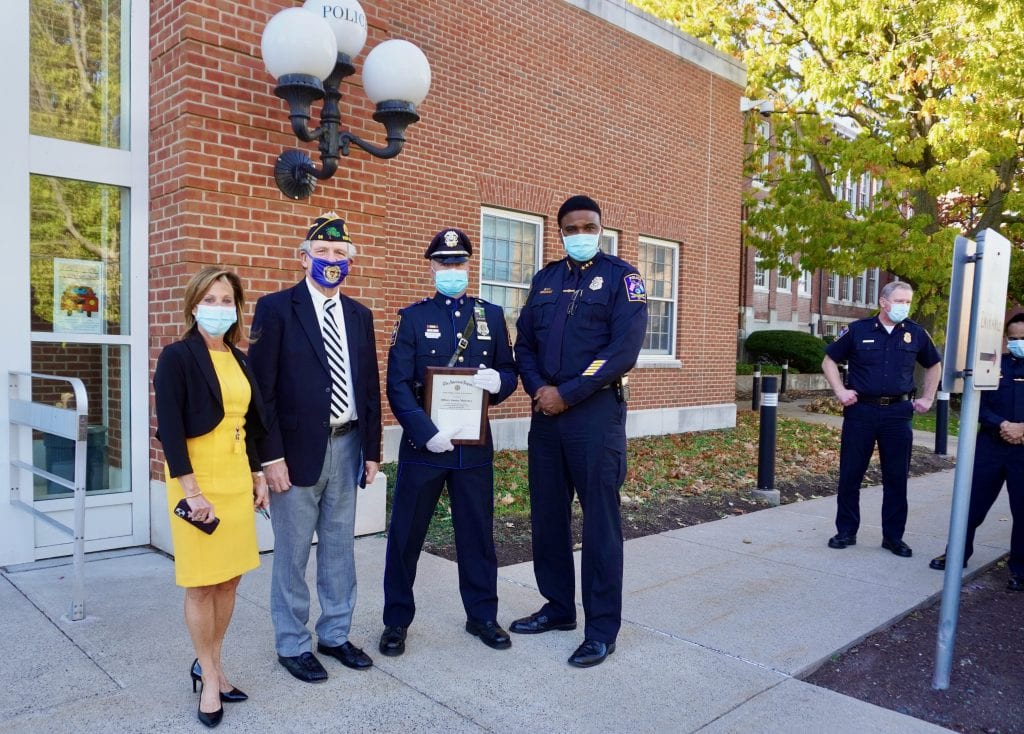 “Thank you for your service,” Police Chief Vernon Riddick said at the award ceremony.

Mahoney also expressed his thanks – to Riddick, Assistant Chiefs Dan Coppinger and Larry Terra, other officers in attendance, and his family, including his wife and two young daughters.

“My family means everything to me, and without their unconditional love, support and understanding, and patience, I wouldn’t be where I am today,” Mahoney said. “They accept when they hear I have to work extra and miss out on their daily activities,” he said.

“Between the pandemic, civil unrest, and the general climate of society, it’s been a tough year for all of us here, but I still believe this is a noble and honorable job,” said Mahoney. 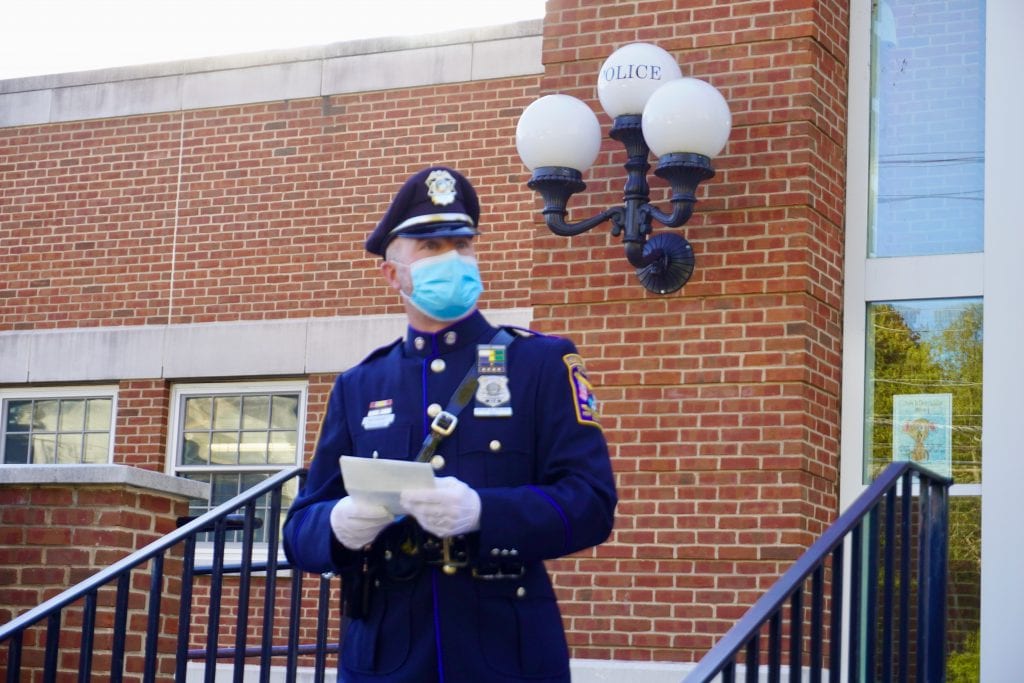 Off. James Mahoney speaks at the Police Officer of the Year ceremony. Photo credit: Ronni Newton

He said he has been very fortunate in his career, serving in a variety of roles in the department, learning from many fellow officers.

“I’m extremely honored and humbled to receive this and to be honored with current and former officer that have received this award,” Mahoney said. “I’m very thankful.”

Mahoney’s nomination for the honor referenced his level headedness and patience – which served him well in his role as School Resource Officer at Hall, helping him connect with students and make them feel comfortable.

As part of CIT, he was involved in hundreds of arrests on charges related to narcotics, weapons, and more. He also assisted in a months-long robbery case that involved hours of surveillance and follow-up that led to multiple felony arrests.

During his career, Mahoney has received seven unit citations, one Merit award and one Departmental Citation for his role in multiple drug investigations, apprehending a burglary suspect, and apprehending a suspect who had fired a gun into the air multiple times while driving around West Hartford.

Assisting in a massive manhunt, he and his partner were responsible for locating the suspect in a homicide that took place in the aftermath of the October snowstorm, finding the suspect hiding in a garage and taking him into custody without incident.

Mahoney has been a valuable asset to the West Hartford Police Honor Guard for many years, representing the department at funerals, wakes, parades, swearing-in ceremonies, and other important events. 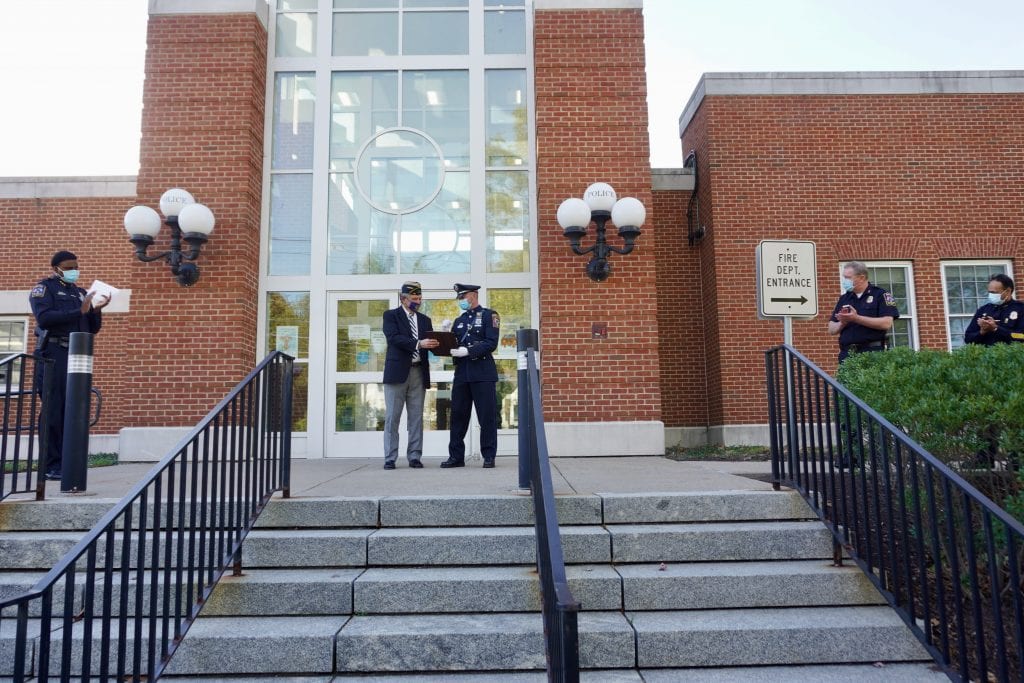 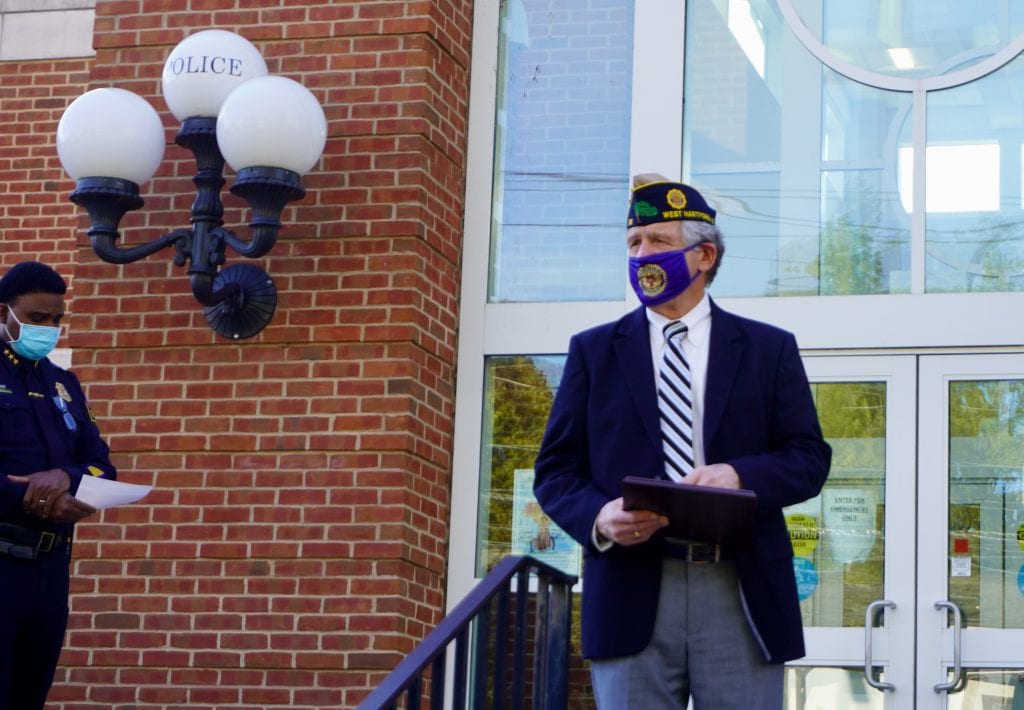 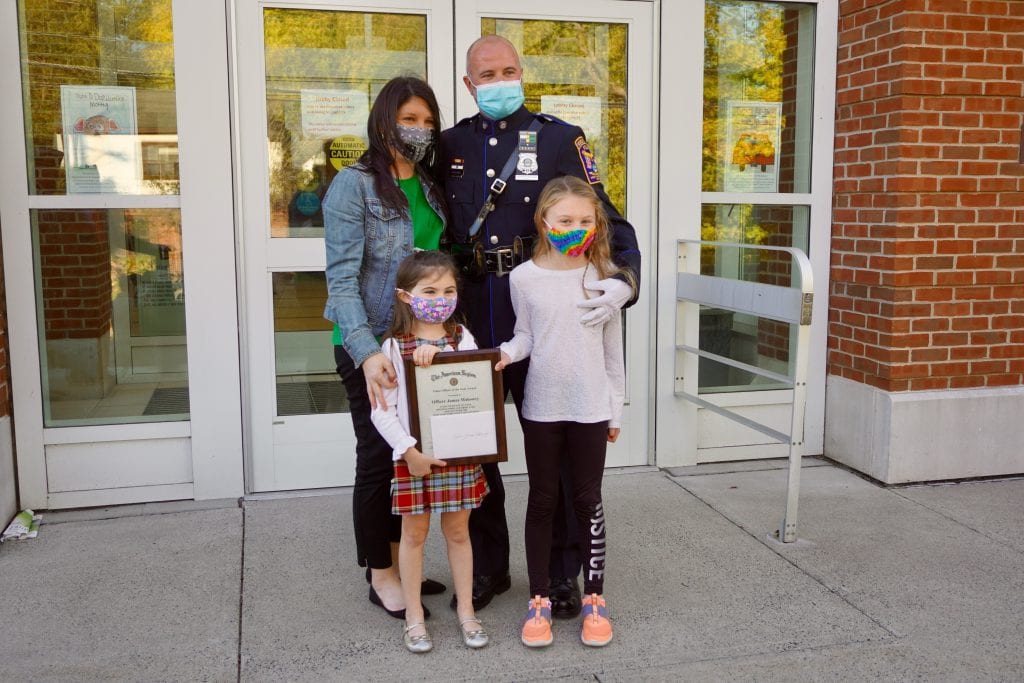 Off. James Mahoney poses with his wife and daughters at the 2020 Officer of the Year Award ceremony. Photo credit: Ronni Newton 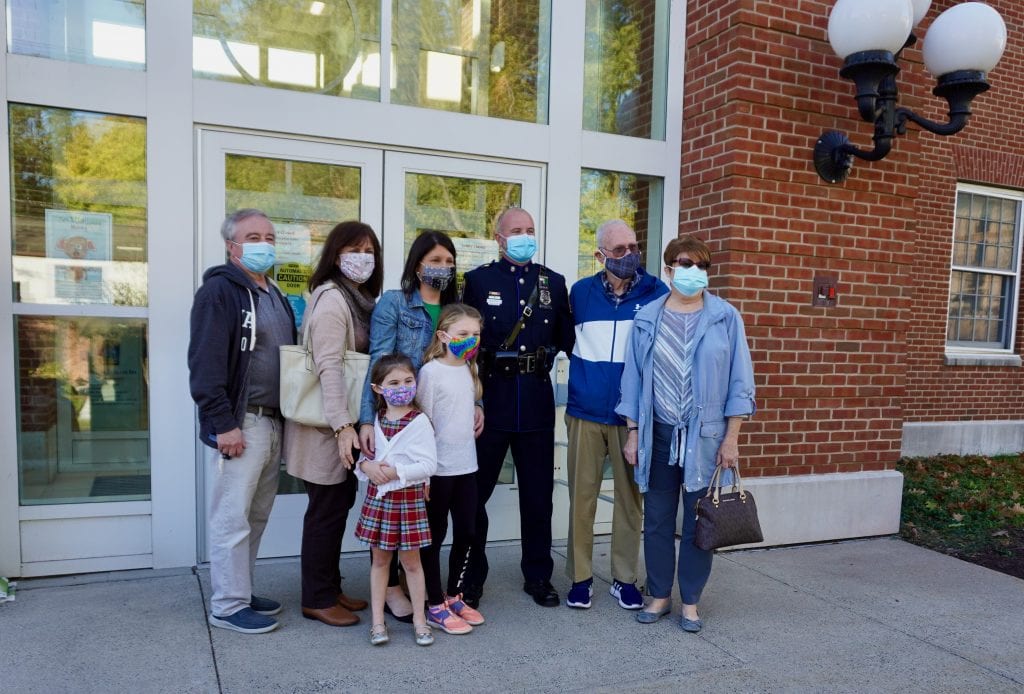 Off. James Mahoney poses with his family at the 2020 Officer of the Year Award ceremony. Photo credit: Ronni Newton