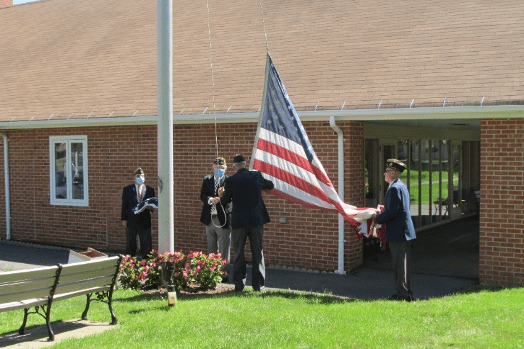 A new American flag was given to the West Hartford Fellowship Housing development in Bishops Corner I honor of Flag Day. 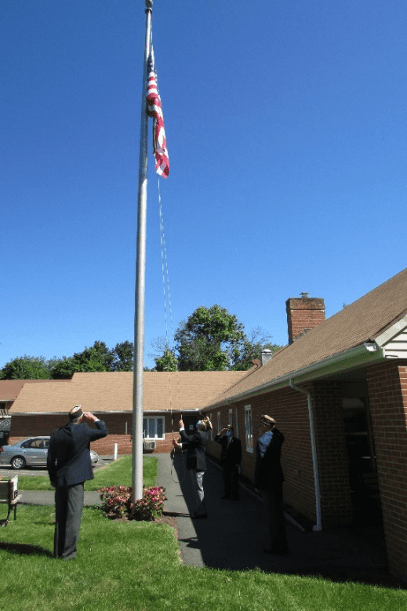 American Legion Hayes-Velhage Post 96 of West Hartford presented a new American flag to the West Hartford Fellowship Housing at Starkel Road in recognition of Flag Day which will be celebrated June 14, 2020.

Post Commander Patrick Harrell said, “Flag Day commemorates the adoption of the flag of the United States on June 14, 1777 by resolution of the Second Continental Congress. We felt this was an opportunity to provide a new flag to replace the flag which had flown over the complex for some time and was ready for retirement. Fellowship Housing is also home to several veterans.”

Linda Caban, property manager of West Hartford Fellowship Housing, said, “On behalf of all our residents, we want to thank the American Legion for their donation and their support for our veteran residents.”

The American Legion was founded in 1919 on the Four Pillars of a Strong National Security, Veterans Affairs, Americanism, and Youth Programs. With a current membership of over 2 million veterans, Legionnaires work for the betterment of their communities through more than 14,000 posts across the nation. There has been a change in the rules of the National Service Act (LEGION Act), signed by the president, that allows for millions of additional veterans to access American Legion programs and benefits, for which they previously had not been eligible.

Prior to this signing, only veterans of war-time periods, as defined by Congress, were qualified for membership. The gaps in the war eras were largely during the Cold War, a time when threats to U.S. national security was real, especially to the men and women serving in uniform. Recognizing the eligibility for the service of these ‘peace-time’ veterans for their efforts now qualifies them for membership in the American Legion.

The American Legion Hayes-Velhage Post 96 of West Hartford has been serving our veterans and the community since 1922. Further information is available on the Post’s website at www.post96.org or phone the Post at 860-233-9029.