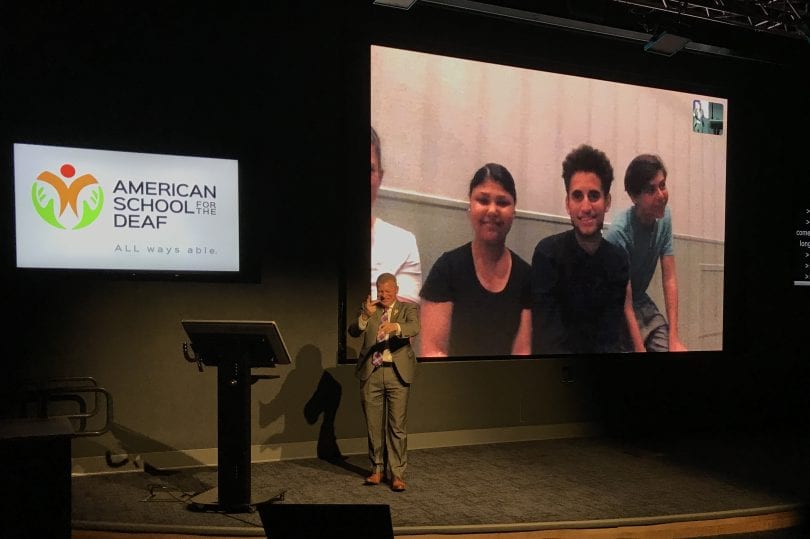 The American School for the Deaf has created a multi-purpose, high-tech room that strives to be universally accessible and allow people of all abilities to feel engaged and included during events.

On Thursday afternoon the American School for the Deaf (ASD) opened Rockwell’s Visual Communications Center and gave a demonstration of the new, cutting-edge technology that the center has to offer. 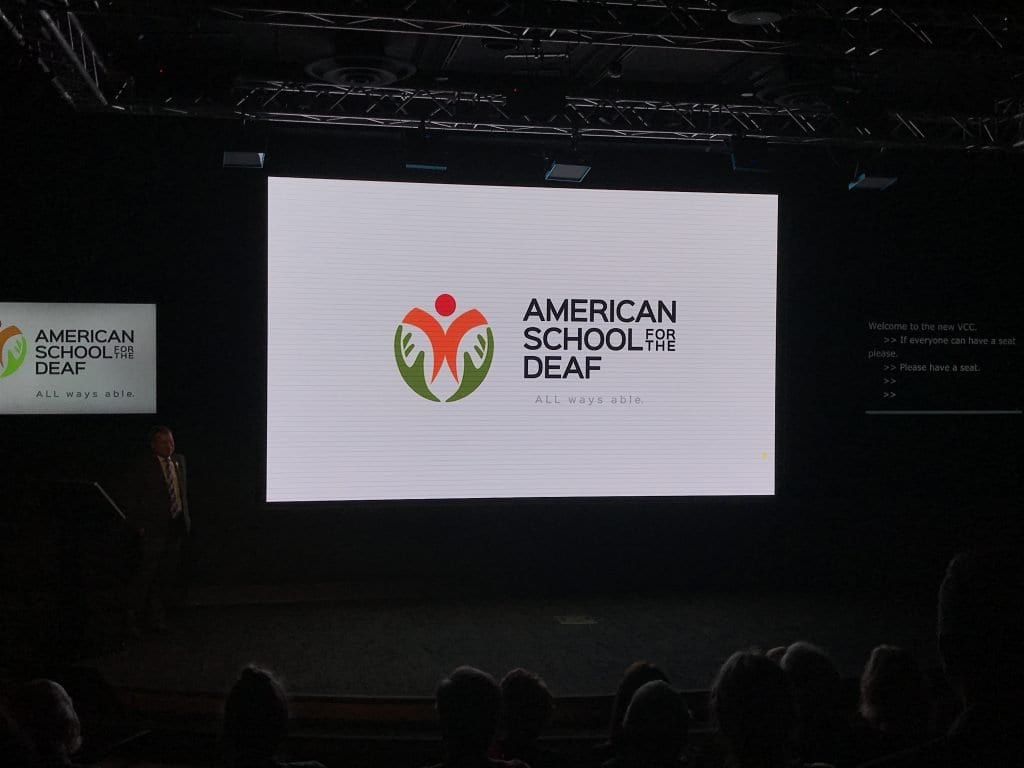 A 16-foot screen fills the front wall of the auditorium to enhance the audience’s experience with large, projected visuals. Photo credit: Maddie Geerlof

Donors, alumni, faculty, and staff gathered in the newly renovated center and watched as ASD Executive Director Jeffrey Bravin explained the different audio and visual technologies that the facility now owns and uses, including several screens that project closed-captions during presentations.

“I want a place that is a universal design, regardless of who you are,” said Bravin as he shared his goal of creating a space that allows people who are deaf, hard of hearing, or even those who can hear to feel included and engaged.

Bravin’s vision for the space began nearly five years ago, but it was not until January that his vision became a reality. Once the school was able to raise the funds needed through grants and donations, the demolition of the space began in March and was completed in about three months time.

The VCC, which used to be an old gymnasium, has a 16-foot screen in the front of the room for projections, presentations, and workshops as well as two smaller screens on either side where closed-captions and visuals can be projected during an event. The room also has retractable seats that allow the facility to open up for banquets, dances, and other events.

Not only will the center be used for presentations, but it will also serve as a video production hub. According to Betty Sugerman Weintraub, the grant program manager of Connecticut Health and Educational Facilities Authority (CHEFA), “[The Visual Communication Center] supports the capacity of the school and the students … and allows for hands-on learning.”

Weintraub said that one of the goals of the VCC is to allow students to have hands-on, vocational training. Weintraub said students have already produced promotional videos for the school using the technology that VCC has made accessible to them.

Bob Nitko, the Educational Technology specialist, and his teammates Jon Onions, an IT technician and Joe Frascarelli of HB Communications, gave a tour of the control room and shared information about the technology utilized throughout the space. They said the center is equipped with 10 subwoofers that create vibrations from loud noises which the audience can feel to give individuals a tangible perception of sound. 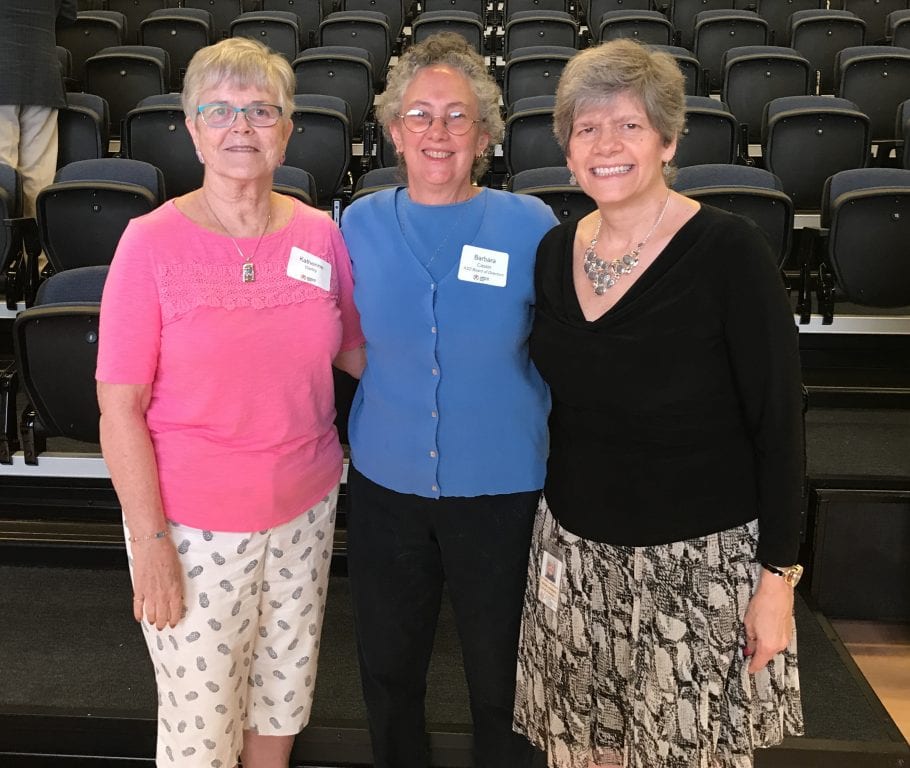 Likewise, an FM system called “Phonek” gives presenters the ability to talk into a wireless microphone that connects to students’ hearing aids and cochlear implants.

“The bottom line is that this is a very visual and fully-accessible space,” said ASD alumni Barbara Cassin who used to play basketball in the gymnasium when she was a student. Cassin said the center “is an extremely beautiful space,” and added that she, as well as many other members of the community, are looking forward to having graduations there over the next several weeks.

Bravin said he is excited to continue cultivating a collaborative and inclusive environment that he hopes will bring together the ASD community, as well as other communities from around the area. 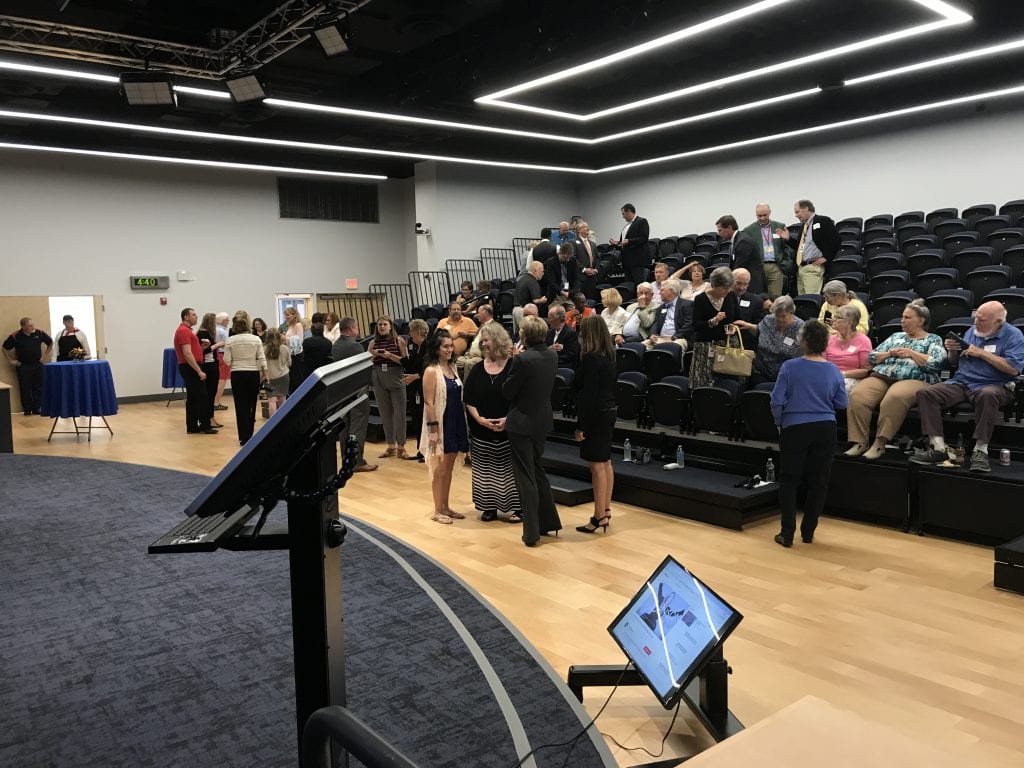 Unveiling of the new communications center at the American School for the Deaf. Photo credit: Maddie Geerlof