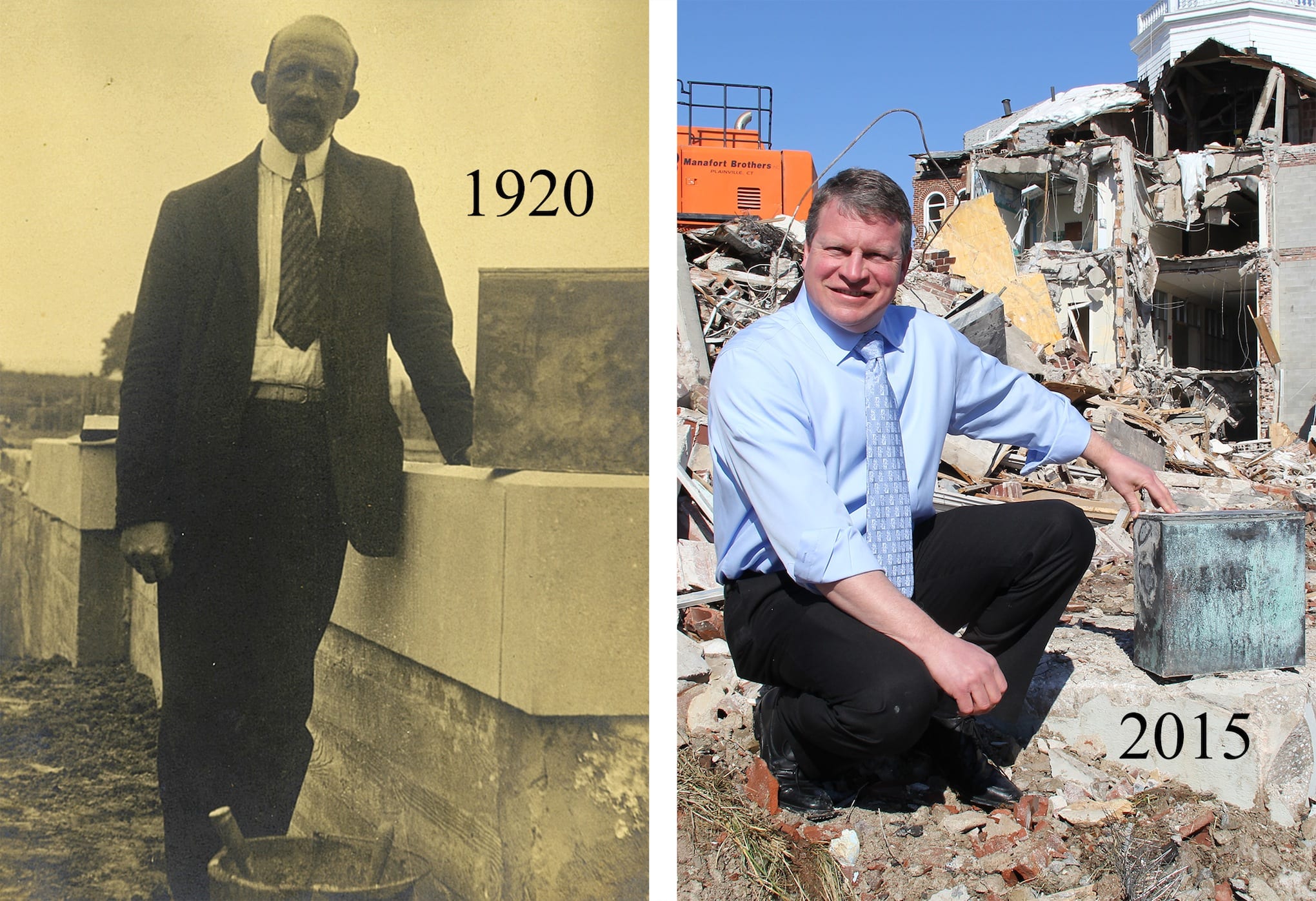 ASD President Henry Perkins (left) placed a time capsule in the Gallaudet Building foundation in 1920. It was unearthed on March 5, 2015, during the building's demolition. Submitted photo

The time capsule placed in the foundation of the Gallaudet Building by then-ASD President Henry Perkins was unearthed during demolition, and the capsule was unveiled to the community in a ceremony on April 10, 2015. 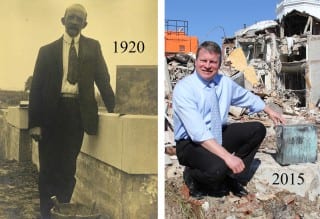 ASD President Henry Perkins (left) placed a time capsule in the Gallaudet Building foundation in 1920. It was unearthed on March 5, 2015, during the building’s demolition. Submitted photo

Submitted by American School for the Deaf

When asked, “What is gratitude, Laurent Clerc’s (one of ASD founders) first teacher, Jean Massieu responded, “the memory of the heart.” This year, on Founder’s Day, April 10, the school will pay tribute to memories that have been preserved in a time capsule for many years.

Usually, a time capsule is created and buried during celebrations – such as laying a foundation for a new building. On July 22, 1920, the laying of the cornerstone for the Gallaudet Building took place. Before it was sealed, ASD President Henry Perkins placed a time capsule inside the foundation. As he did, he gave the following address:

“The laying of a cornerstone and dedication of a building has a very different significance. In a dedication there is always a spirit of gratitude for a task completed, while when we lay a cornerstone we do so in a spirit of hope for a successful carrying out of an enterprise just beginning and of faith that we shall achieve it. A cornerstone, like the keystone of an arch, is symbolic of something upon which all the rest of the structure depends – something that supports and sustains.

Although modern architecture involves a different kind of construction, still what we do today is typical of that significant act, the laying of a cornerstone. In its performance, I think we should consider that we are cementing ourselves as it were into the very fabric of this building in which we are so keenly interested. This little group represents all those most intimately concerned in our enterprise – the board of directors, the teachers of the school and its principal, and the architects and the builders. We should here consecrate ourselves to supporting the work of the school just as this cornerstone is to support the edifice we are erecting.

Another feature of this occasion is, in conformity with an old custom, the sealing up of a box containing old papers dating from the time of the founding of the school, a city directory of today, the current newspapers, school reports, and coins of the present year. This, in a way, links us both with the past and with the future, and symbolizes the continuity of our body and our work. I think today we are too apt to overlook the importance of continuity and are inclined to ignore the past which, after all, is an essential foundation for the present. When this box is opened, perhaps a hundred years hence, it will serve as a reminder of this ceremony and what it means to us – just as today we should remember the founders of the school and all that they stood for.”

The time capsule that was sealed in the Gallaudet Building’s foundation by Mr. Perkins in 1920 was unearthed during demolition on March 5, 2015. And so, not quite 100 years later on Founder’s Day, we will open this intriguing box of “memories of the heart” and honor our Founders – with gratitude.