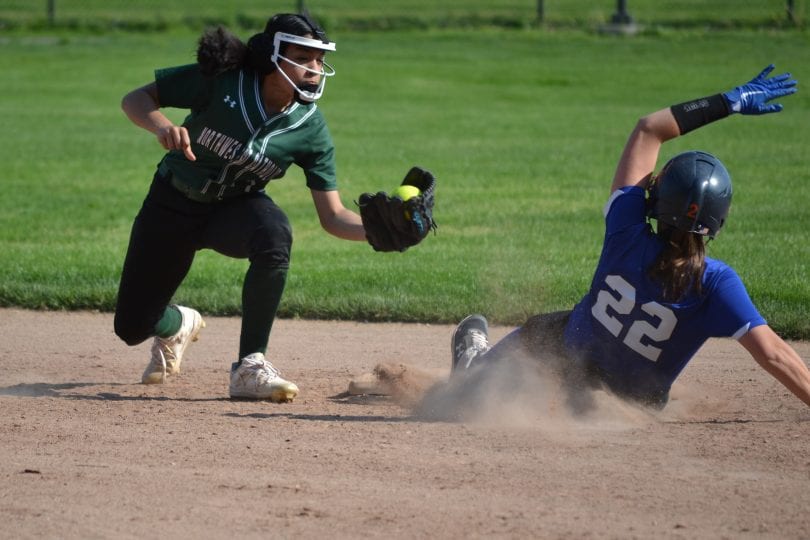 Hall second baseman Becca Markie is in ahead of the throw. Hall vs. Northwest Catholic Softball. May 19, 2021. Photo credit: Paul Palmer 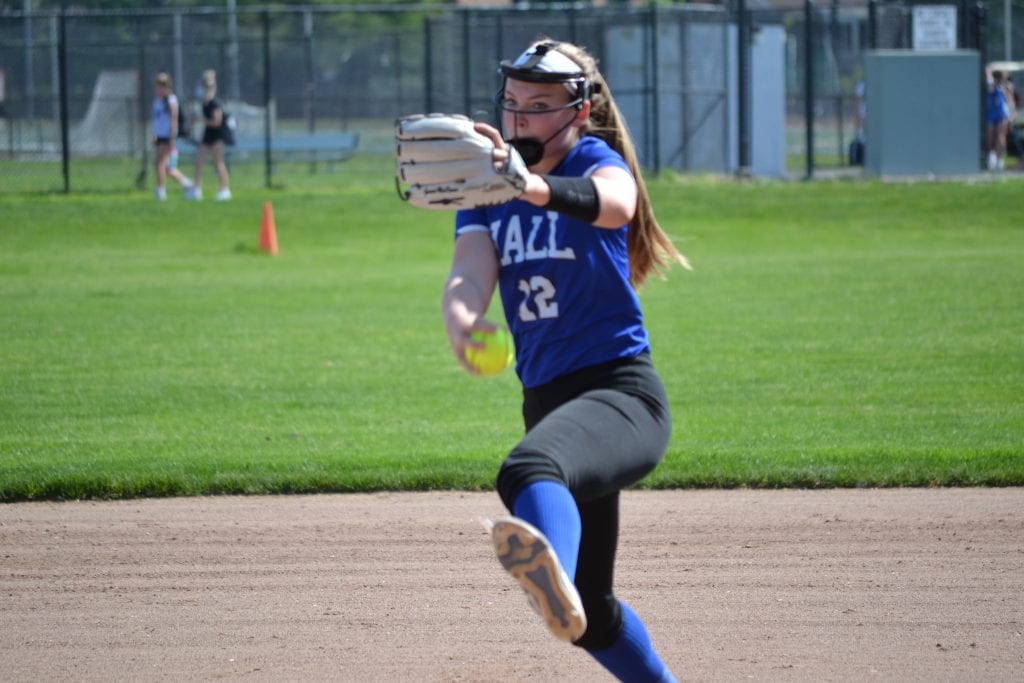 The hardest part of Wednesday’s softball game for Hall High School, may have been the pre-game.

Three players, including standout starting pitcher Sophie Garner-MacKinnon, had exams in the afternoon and weren’t able to arrive until just before game time. Then in warmups, shortstop Jordan Frankel took a ball to the face after a bad bounce. She would be cleared by the trainer, the Hall players would arrive before the start of the game, and the Warriors would end it in just five innings with a 15-0 win. 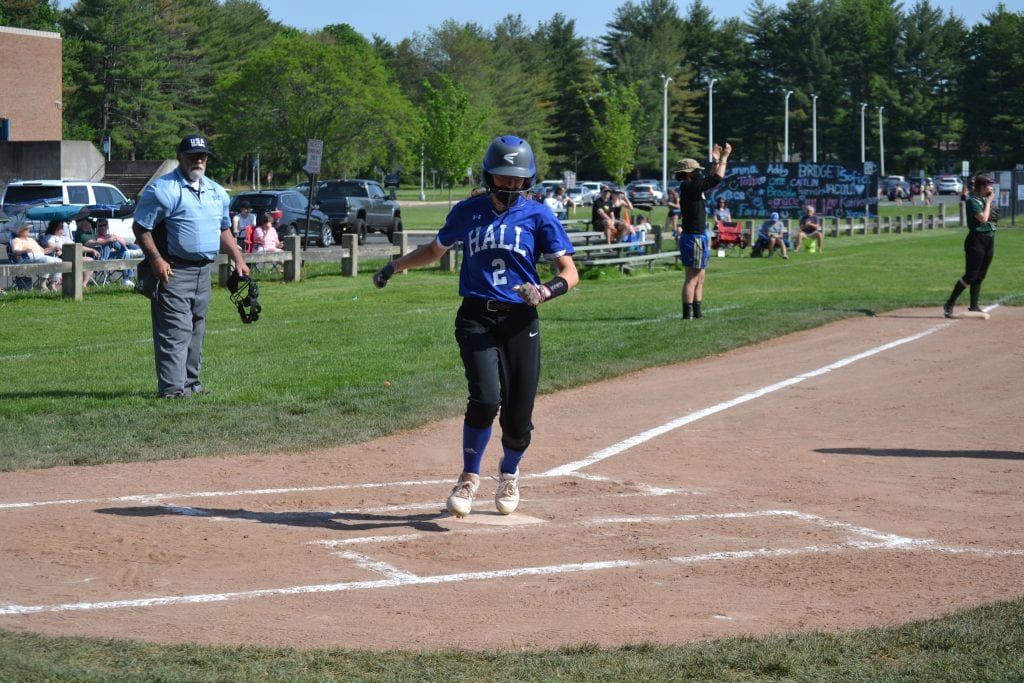 “Warmups were a bit interesting,” said Hall coach Becca Lewis. “We knew with the exams, that some of them would be getting here a little later, so we talked about it yesterday.”

Garner-MacKinnon, just a junior but already committed to Duke, came into the game  with an 11-2 record through 89.1 innings pitched. She had allowed just two earned runs, carried a 0.158 ERA with 218 strikeouts, and batters were hitting just 0.68 against her. 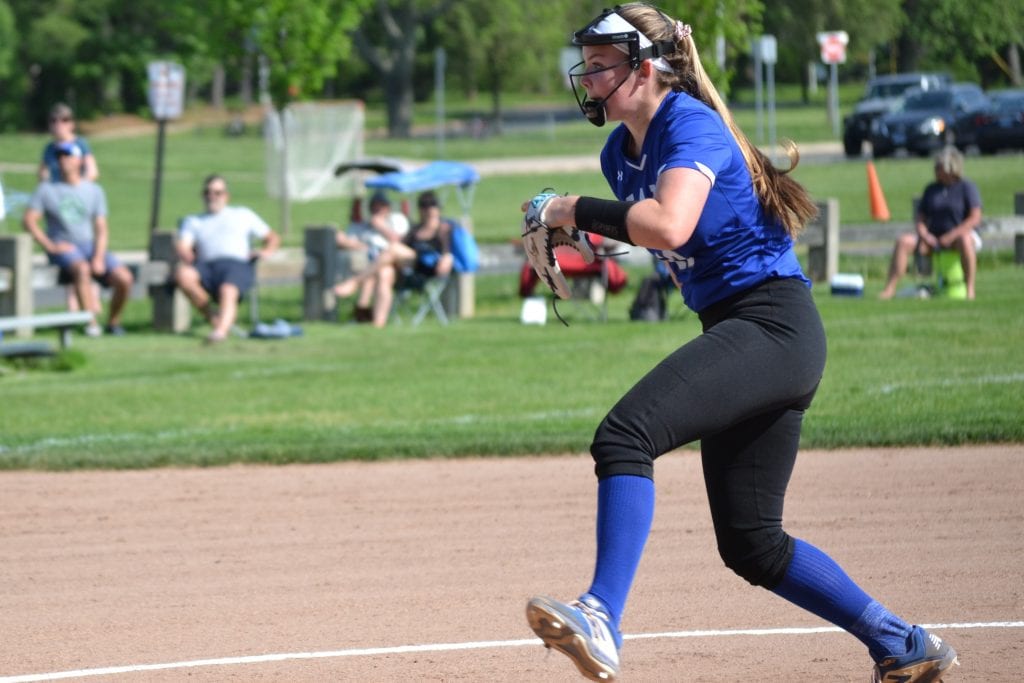 After allowing a leadoff single, she struck out the next batter, and issued a walk to the third batter for the Lions.

Then she proceeded to strikeout every Northwest batter from that point on – 14 in a row. As for her day, Garner-MacKinnon took it all in stride. “I was a little stressed in the exam because we had a game, but I just decided I trusted what I was doing.”

In terms of offense, Hall scored all the runs it would need in the first, pushing across 6 runs on 5 hits, a pair of walks, and an error by NWC. 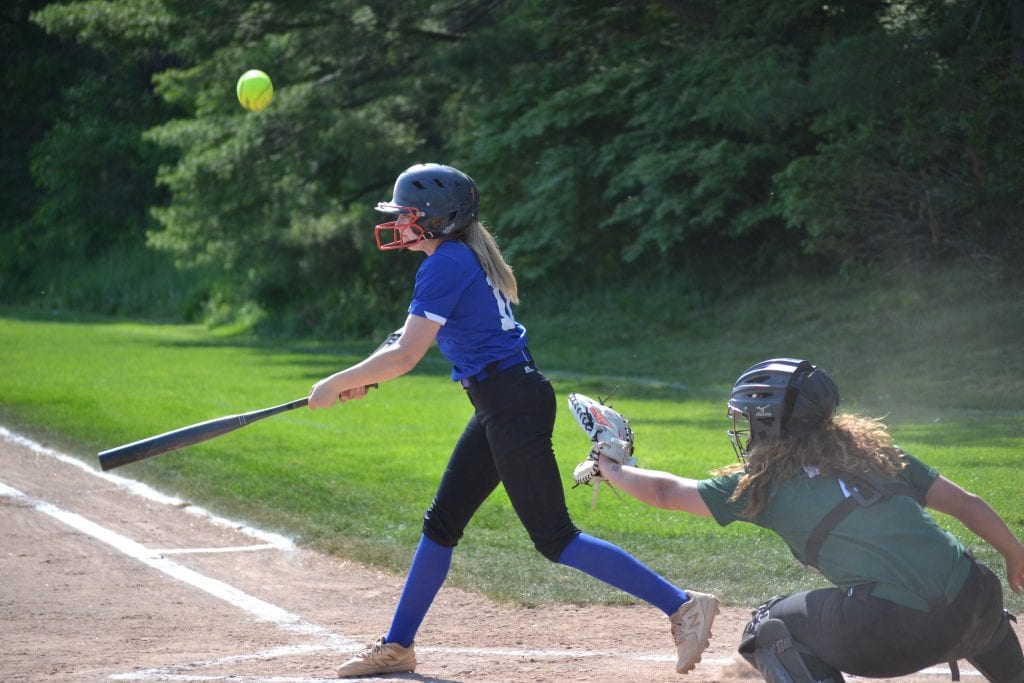 Hall’s Stephanie Markie would off a pitch in the first inning of the Warriors’ win on Wednesday. Hall vs. Northwest Catholic Softball. May 19, 2021. Photo credit: Paul Palmer

Second baseman Becca Markie’s double to left drove in the first run. She was followed by Jane Grove’s RBI single that plated Markie. Two batters latter it was Tessa Hache driving in the third run with the first of her three hits on the day.

The second error by the Lions allowed another run in, before a fielder’s choice scored the fifth, and No. 9 hitter Genevieve Nelson’s single to center made it 6-0.

Hall would add one in the second, and two in both the third and fourth innings, before scoring a four runs in the fifth, ending the game based on the score. Becca Markie would finish with two doubles and a single, Hache had two singles and a double, and Nelson had two hits. 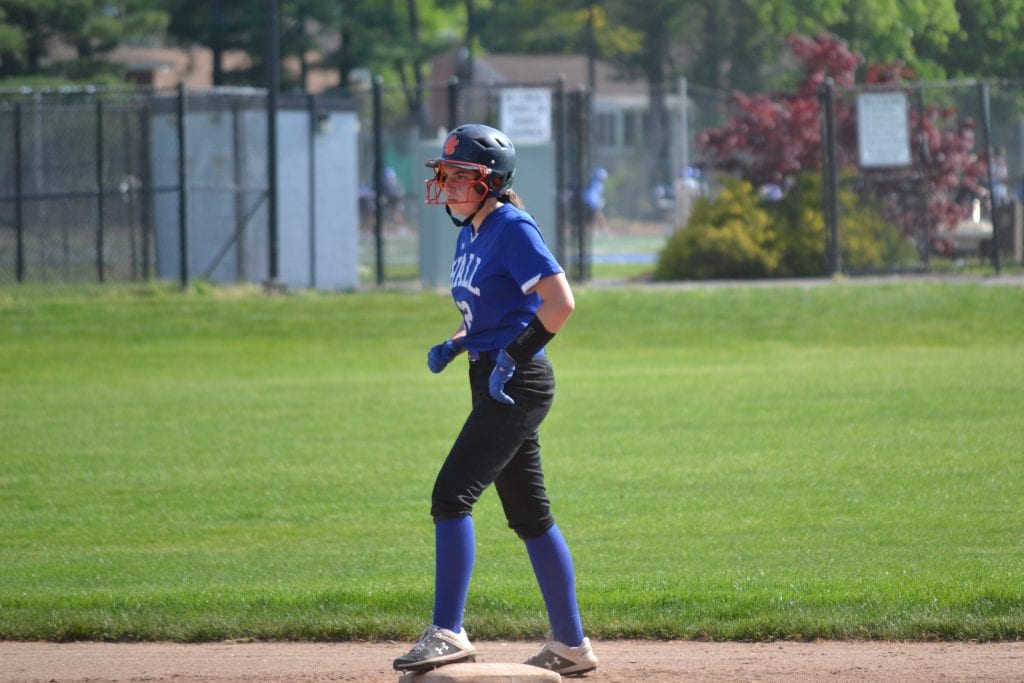 Hall’s Becca Markie stops at second base after hitting one of her two doubles in the Warriors’ win. Hall vs. Northwest Catholic Softball. May 19, 2021. Photo credit: Paul Palmer

Lewis was pleased with not only the outcome but the continued improvement she saw in her team.  Every single player got in this game and they have all risen to every challenge,” said the coach.

Catcher Stephanie Markie reached base three times and continued her strong work behind the plate catching Garner-MacKinnon’s blistering fastball and other pitches. “She throws so hard,” said Mackie. “I get bruises on my hands, but she’s fun to catch.”

The Warriors, now 14-2 and ranked No. 5 in Class LL, have three games remaining – and all of them are important to the team and to the players. 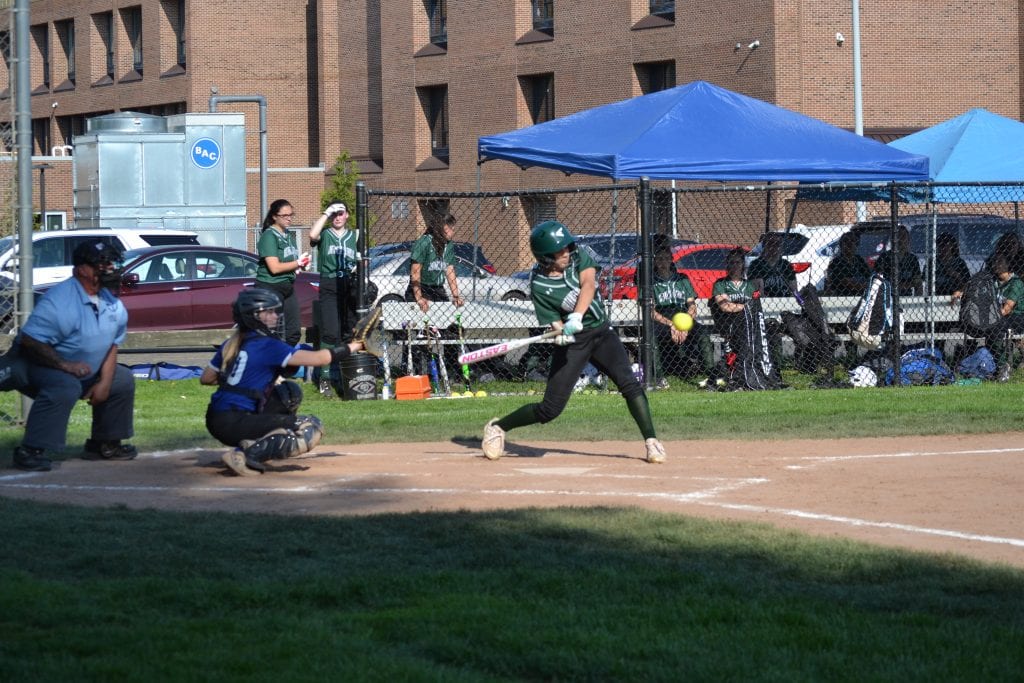 Hall has its rematch with Southington on Friday. The Knights are ranked No. 5 in the state with a 14-1 mark. They went eight straight games without giving up a run and beat Hall 4-2 earlier this year.

“They [Southington] are a great team,” said Lewis of her next opponent. “These are the games we look forward to.”

After that it is the rivalry game with Conard on Monday and the regular season finale and senior day on Tuesday against Newington.

That final game is a real family affair as the Indians are coached by Steve Markie, father of Hall’s Stephanie and Becca Mackie.

Stephanie had a simple answer when asked about the game: “We’re gonna beat them,” said the catcher. “I’m very excited,” said her sister, the second baseman. “I’ve been waiting for my senior night to play him,” said Becca.