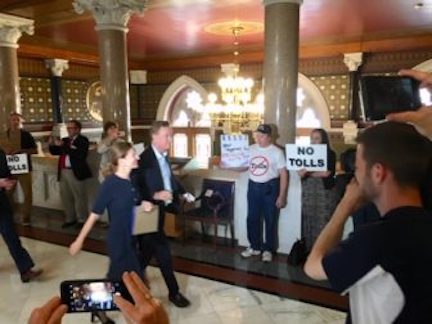 The report, included as a PDF below, offers ‘representative’ examples of projects now under design to ease bottlenecks.

The administration of Gov. Ned Lamont re-launched its campaign for highway tolls in a private two-pronged pitch to wary legislative leaders Wednesday, setting Connecticut’s growing transportation infrastructure needs against a special transportation fund on the verge of insolvency.

Its reboot of a plan originally rolled out in February offers sweeteners to lawmakers concerned about the financial impact on constituents, primarily by lowering the income tax on the first $10,000 of taxable income from 3 percent to 2 percent, providing a savings of between $90 and $180. The plan also would offer discounts on tolls and lower fares on bus transit.

But the legislature appears no closer to returning in special session to address the governor’s proposal to raise funds and alleviate congestion with variably priced tolls on the Merritt Parkway and Interstates 84, 91, and 95. Republican leaders said they were invited only because Democrats cannot pass a tolls bill on their own, and no GOP support is forthcoming.

“No, we don’t support tolls, period,” said Senate Minority Leader Len Fasano, R-North Haven. He added that he believes Senate Democrats would not call a vote on tolls without some Republican support, an assertion Senate Democratic leaders would not confirm or dispute.

“I would not comment on that directly until we have a caucus,” said Senate President Pro Tem Martin M. Looney, D-New Haven. “I do believe it it would be preferable for an issue of this magnitude to be bipartisan.”

“I think the governor genuinely wants a bipartisan solution that all four caucuses can support,” said Senate Majority Leader Bob Duff, D-Norwalk. “He invited Republican leaders, because he wants everybody at the table.”

After a nearly two-hour presentation, Lamont smiled when asked how it went. He said, “Well, as they say after those State Department summits, I’d say we had frank and honest discussions.”

What he needs is a way to reassure Senate Democrats, who now hold a 22-14 majority after sharing power in an 18-18 Senate for the previous two years, that tolls would not cost the party its majority. House Democrats hold a 91-60 majority, but their leadership has indicated it would not act on tolls until the Senate demonstrates it has the votes.

The regular session ended two weeks ago without a vote in either chamber on Lamont’s proposal to return tolls to the states’ highways after an absence of 30 years, a defeat for a new Democratic governor who says a new and stable source of transportation funding is the key to the revival of a lackluster economy.

Protesters greeted Lamont and Lt. Gov. Susan Bysiewicz as they walked across the hall of the State Capitol from the governor’s office suite to a conference room, shouting, “No tolls!” Their presence was a reminder of the grassroots opposition to tolls, encouraged by Republicans and the trucking industry.

The meeting was geared to legislative leaders, not the press or public. Reporters were given copies of a power-point presentation (provided below as a PDF) delivered by two top aides: Melissa McCaw, who oversees the budget as secretary of policy and management, and Joseph J. Giulietti, the commissioner of transportation.

McCaw said the special transportation fund is in crisis: The state is about $400 million short of the $1.25 billion the needs to spend annually  to keep its transportation network in a state of good repair. The actual costs are nearly $2 billion – $1.45 billion for highways and $550 million for transit – but the federal government contributes $750 million.

Lamont said there is little dispute about the extent of the problem, although Fasano and House Minority Leader Themis Klarides, R-Derby, demurred on this point, saying they needed time to study the administration’s numbers.

The governor said the biggest challenge is to convince Republicans that new transportation revenue would be well spent.

“I think talking to my Republican colleagues, there is a just sense that any money spent is money misspent by government going back 10 years,” Lamont said. Of tolls, he said, “That money could only go to transportation.”

Transportation expenses are outpacing revenue by a 5-1 margin, and Connecticut is falling behind on nearly every measure in maintaining a network of 3,719 miles of roads, 4,016 roadway bridges, 103 miles of rail, and a fleet of 600 buses, 486 rail cars, and 28 locomotives, according the administration.

Fifteen percent of interstate highway bridges in Connecticut are in poor condition, second only to Rhode Island’s 24 percent in the northeast. To avoid losing federal funds, the state is now required to earmark at least $80 million this year for repairs on bridges in the national highway system.

Beginning in the 2022 fiscal year, the special transportation fund would begin running deficits just trying to maintain roads and bridges in a state of good repair – sooner if the state tackles highway widening or other improvements.

Lamont, who lives in Greenwich, said maintaining a state of good repair is a must. He recalled crossing the Mianus River Bridge on I-95 just hours before its collapse in 1983.

A massive rebuilding program dropped the number of bridges in poor condition from 685 after Mianus to a low of 148 in 1998. The number crept up to 341 in 2013, prompting a renewed effort at repairs.

Wednesday’s presentation attempted to deliver what was missing in the administration’s earlier attempts to sway the public and lawmakers: A vivid description of worsening congestion to be expected in Fairfield County without improvements, and the impact of selective I-95 widening and exit improvements that could cut some commutes from 96 minutes to 69 minutes.

It still had the hallmarks of a work in progress, however, offering some stark examples of what selected commutes could look like by 2040 without a massive infusion of new revenue, but falling short of offering a comprehensive picture of public transit and highway commutes with and without the improvements the administration says tolls could bring.

Instead, the report offered “representative” examples of projects now under design to ease bottlenecks, promising to cut rush hours commutes – as much as 18 minutes a day in Danbury and nearly 23 minutes in Middletown, where traffic backs up at two traffic signals on Route 9.

“I think people in that room there knew exactly how transformative these investments could be,” Lamont said.

He said Giulietti talked in some detail about how adding a 6.3-mile northbound lane between exits 19 and 28 on I-95 would relieve a bottleneck in Bridgeport that backs up evening rush-hour traffic towards Stamford and the New York border. The new lane would cut the travel time from the state line to Bridgeport from 63 minutes to 41 minutes.