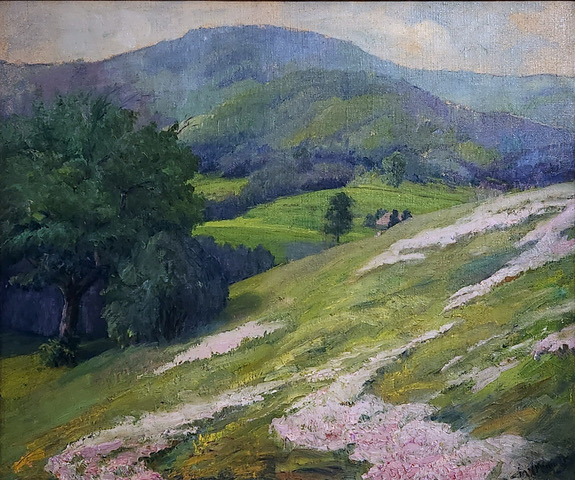 Two current exhibitions at The Art Museum at the University of Saint Joseph in West Hartford highlight recent gifts.

The Art Museum, University of Saint Joseph (USJ) is pleased to announce several significant gifts to its collection. Highlighting some of these donations are two current exhibitions: Together Again: Paintings by Maude Monnier (1876-1932) and James Britton (1878-1936) and Five Collections / Five Themes: Recent Acquisitions in Photography, which will be on view through March 11, 2023. Abstract color photographs by Butch Wandy will feature in a future installation of works from the collection.

Together Again presents a selection of works by Maude Nottingham Monnier and James Britton, friends whose paintings were often seen together in Hartford art exhibitions of the late 1920s and early 1930s. A founding member of The Society of Women Painters and Sculptors of Hartford (now Connecticut Women Artists), Maude Monnier exhibited regularly in group shows and had solo exhibitions at the Hartford Women’s Club (1928), the Morton Galleries, New York (1930), and the Wadsworth Atheneum Annex (1932). Known for her floral and garden subjects, Monnier was particularly praised by reviewers for her effective use of color. One of her admirers was the well-known Hartford-born portrait painter and art critic James Britton, with whom she shared an exhibition at the Hartford Women’s Club in November/December 1929. A prominent figure in the Hartford art world, Britton played a significant role in the development of the Reverend Andrew J. Kelly’s art collection, which included multiple landscapes by Britton and formed the basis of the Art Museum at USJ. The exhibition features recent gifts from Donna Monnier T. Loeb and Barbara and Ursula Britton, grandchildren of the artists.

Five Collections / Five Themes exhibits a sampling from the 238 photographs included in five 2022 donations to the permanent collection. Not only do these gifts substantially enlarge the scope of the Museum’s holdings (e.g., with works by Henri Cartier-Bresson, Mike Disfarmer, and Mark Citret), they also lend the collection depth in the work of a number of important documentary photographers such as Dmitri Baltermants, Danny Lyons, and Nathan Lerner. Organized in five thematic (and somewhat overlapping) groups (Working, Youth, Japan, The 1960s, and Toward Abstraction), it suggests but a few of the many lenses through which these photographs can be studied and appreciated. The photographs are gifts from the collections of Ms. Conan Putnam and Charles Ziegler, James and Holly Bogin, John Chatzky and Deborah Mullin, and Yuri and Zoe Gurevich.

Selections from a group of striking color abstractions by Butch Wandy, a gift from the artist in 2022, will be included in a future installation at the Art Museum. These works, which the artist calls “micro-prismatic images,” are not retouched or digitally manipulated, but rather are created through a proprietary technique that produces an extraordinary range of abstract patterns and colors, reflecting the artist’s interest in elements of cubism and abstract expressionism. Born and raised in Hartford, Wandy was educated at the University of Connecticut. He is an elected member of the Connecticut Academy of Fine Arts.