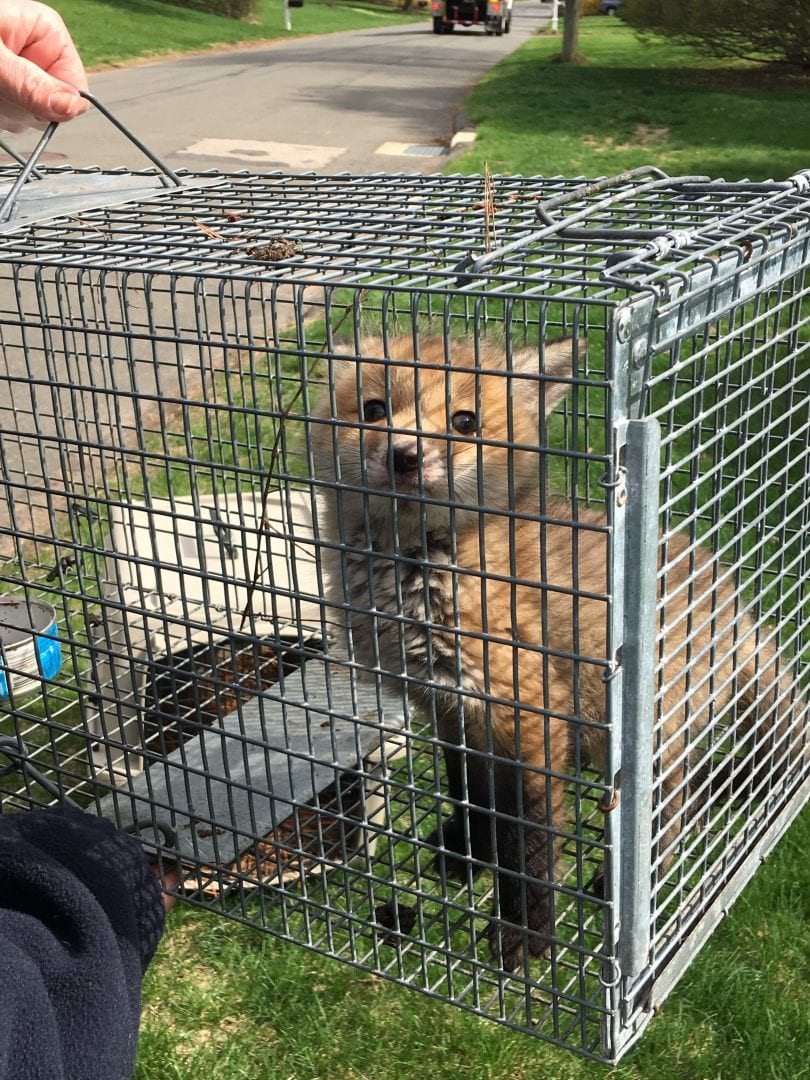 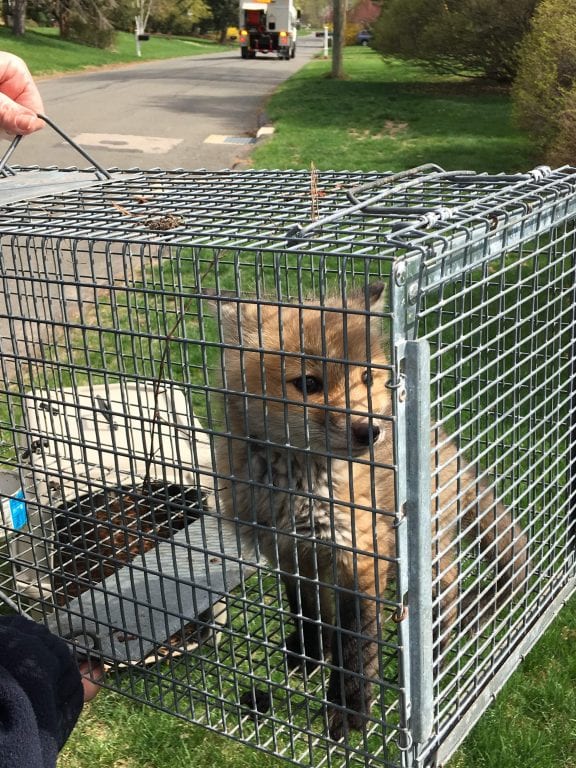 A baby fox that became stuck in a storm drain at the corner of Meadow Lane and Glenwood Road in West Hartford was not only rescued but has likely been reunited with its family thanks to the efforts of West Hartford Animal Control, Public Works, and several residents.

This story with a happy ending on Thursday night began on Sunday. “It was a huge collaborative effort,” Animal Control Officer Karen Jones said in a phone conversation Friday.

West Hartford resident Julie Starr said that several nights ago she kept hearing screaming and crying. “Listening to the cries I walked around my yard with a flashlight expecting to find bunnies in duress. Roaming cats have known to plague my yard bunnies. I found nothing,” Starr said in a message.

On Monday, April 17, Starr learned it was a fox pup that had been making the noise. She said that West Hartford Animal Control Officer and Public Works officials were trying to remove the pup from the drainage basin but it kept running away.

In a case report, Jones reported that she heard “strange barking type noises” coming from the storm basin but wasn’t sure at first whether the small canine pup was a fox or coyote. It kept darting into the pipe when she tried to observe it.

According to Starr, she saw claw marks around the drain, and thought a parent had been trying to rescue its baby. 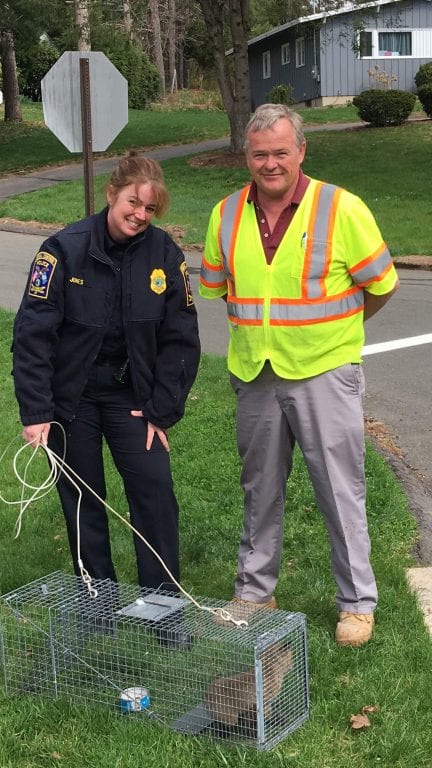 Jones said she elicited the help of Department of Public Works Operations Manager Brian Mitchell because she needed to understand the layout of the pipes and get assistance removing the basin cover. “He admitted that this was one of the most unusual requests for help he has ever received,” Jones wrote in her report.

Jones and Mitchell attempted to lure the pup into a flexible net using food as bait but it kept hiding. They resorted to using a “Have-a-Heart” trap, which they set at the bottom of the basin.

“We hoped to catch the little pup overnight. Brian Mitchell replaced the drain covers. I checked on the trap throughout the day without any luck,” Jones wrote.

On Tuesday morning, Jones noted that the trap had been sprung but the pup had not been caught. Jones and Mitchell were concerned because it was going to start raining. According to Jones’ report, “After a few innovative ideas, we decided it was best to raise the trap to meet the pipe where the pup was hiding. We did so by placing the trap on top of an old tire provided by DPW garage, and used cardboard to fill in gaps,” in order to “funnel” the pup toward the baited trap.

At 8:20 a.m. Wednesday, Jones found that the fox pup had been successfully trapped.

Jones and Mitchell worked to remove the trap from the storm drain, with neighbors looking on (see video below), and Jones was able to identify the pup as a red fox kit. “He or she seemed very healthy but obviously scared from the ordeal,” wrote Jones.

“I marveled at their relief and happiness,” Starr said.

Jones said her goal was to reunite the kit with a parent. According to Jones, there are only two fox rehabilitators in the state and she wasn’t sure the kit would be accepted.

According to Jones, resident Rodney Vaughn, who was watching the rescue and said he had heard fox in his yard, agreed to help set up the reunion. Vaughn and his teenage son, Zar, found a secluded location in their backyard, and Jones transferred the kit to an animal crate, lined with pine needles for insulation. It was provided with food and water.

“I was glad to help when [Jones] offered up the idea,” Vaughn said in an interview Friday afternoon.

“It turns out that the den the mother fox had created for her babies was behind a shed at the house catty corner to my house,” Vaughn said.

“I placed the crate under a tree for protection and the crate was secured to the tree with a cable,” Jones wrote in her report. She told Vaughn that the kit would call for a parent – who was likely nearby – once it got quiet.

Vaughn said that all was quiet on Wednesday night. “There was no noise from the baby like when it was trapped,” he said.

Vaughn kept checking, and Thursday morning, before heading to work, he said he walked out to the backyard and could see the kit still in the crate. He then saw a mother or father fox about 40 feet away, but it ran off when it saw him.

Vaughn, as he had been instructed by Jones, opened the door to the crate because he had seen the adult fox, but the kit remained in the crate for the rest of the day.

At 8 p.m. Thursday, Vaughn advised Jones that the kit – whom his family named “Fantastic Mr. Fox” based on the animated character played by George Clooney in the 2009 film – was no longer in the crate.

“We didn’t know for sure because we didn’t see them walk away together,” Vaughn said, but Jones assured him that the adult fox had probably been waiting for it to get dark to move the kit.

“As with most wildlife, adults teach their young to be still and quiet during the day. When it becomes dusk, it is a safer time for the adults to move their young without detection from likely predators,” Jones said.

Jones expressed her thanks to Vaughn for the efforts he and his son made “to ensure the little fox kit has a fighting chance of survival.” 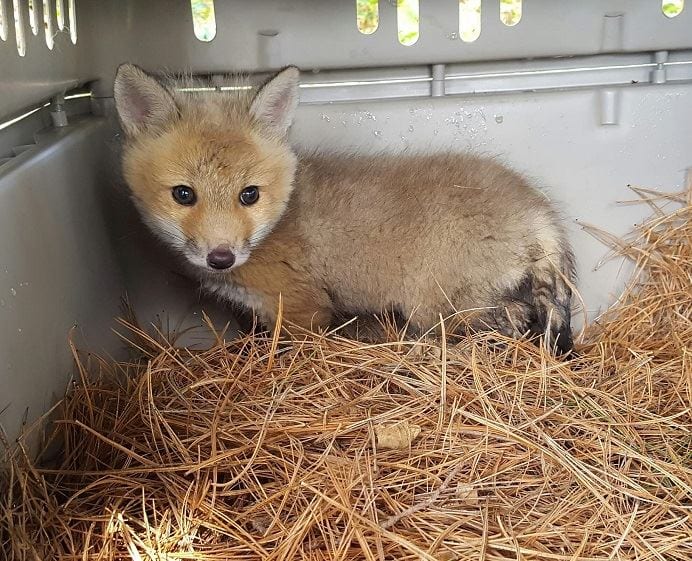 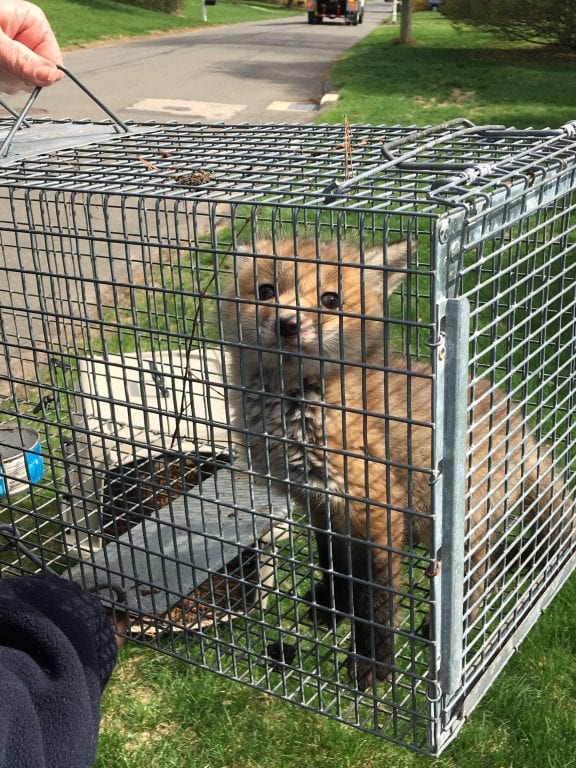