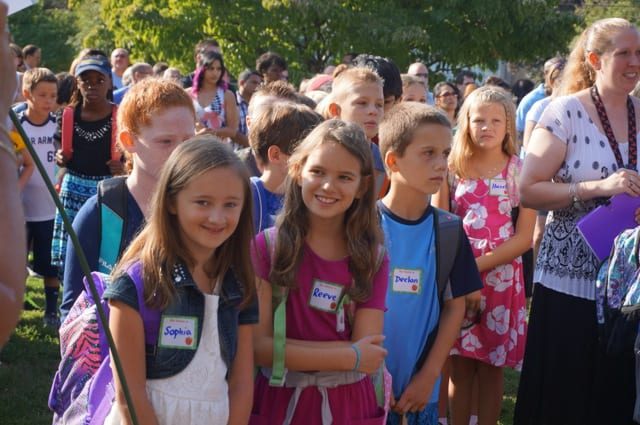 Students at Duffy Elementary School in West Hartford wait for the flagpole ceremony to begin on the first day of school. Photo credit: Ronni Newton.

On a warm and sunny Wednesday morning, nearly 10,000 returned to class at West Hartford Public Schools.

Early in the morning on Wednesday, August 27, the buses began rolling as nearly 10,000 West Hartford residents packed empty notebooks and newly-sharpened pencils into their backpacks and headed off for the first day of school.

Flagpole ceremonies are a traditional first-day ritual at most of West Hartford’s elementary schools, allowing teachers to gather their students outdoors, and participate in a flag-raising usually accompanied by music and a greeting from the principal.

At Duffy Elementary School, new Principal Kristi Laverty said she was “extremely excited and off to a fantastic start” as she waited to officially welcome the students to the start of the 2014-2015 school year.

“There are no limits to who you can become,” Laverty told the 500-plus students who gathered on the lawn with their new teachers, their families watching on the outskirts.

Following the flag raising and the Pledge of Allegiance, vocal music teacher Marilyn Holcomb conducted a group of 4th and 5th graders who led the rest of the Duffy community in the singing of “My Country Tis of Thee.”

“Duffy Dragons, we’re ready to start a brand new day,” Laverty said. “Dare to be great! Your teachers are and we want you to do the same!”

From the youngest to oldest grade, smiling students following their equally excited teachers into the school to begin the new year.