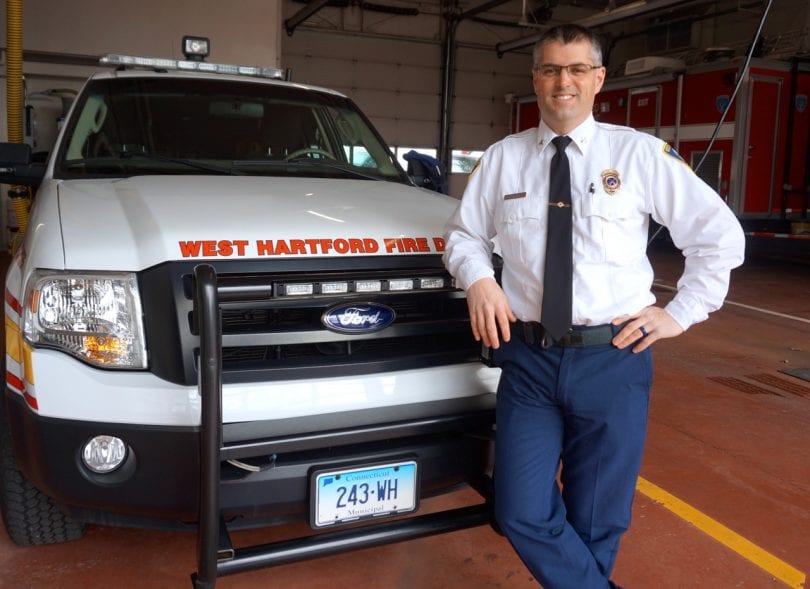 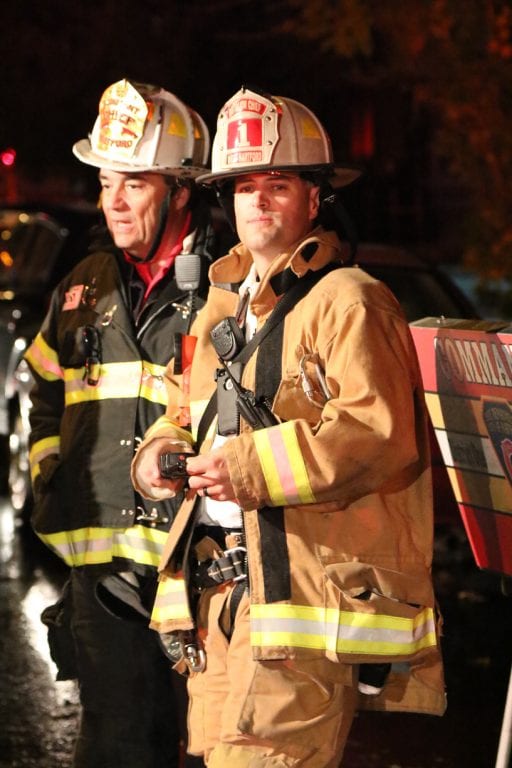 Battalion Chief Kevin Munson did not plan to leave the West Hartford Fire Department at this point in his career, but he could not pass up the opportunity to become assistant chief in East Hartford, and work with his former mentor, Chief John Oates.

He will also be working alongside Matt McCarthy, a former lieutenant in West Hartford who is now an assistant chief in East Hartford.

“I absolutely love working here. It’s not a job, it’s a passion,” Munson said of the West Hartford Fire Department. “We see bad things and good things, we laugh and we cry. It’s a brotherhood and sisterhood, really like family.”

Even though he will no longer be working in West Hartford, and will miss his co-workers, Munson’s legacy will continue to have an impact, in the training that all firefighters receive on a constant basis.

Munson was promoted to lieutenant about a dozen years ago, and said that current Lt. Jarrad Smith was on his crew at the time and helped inspire his love of training people. “He’s one of the smartest people I know. He had great retention, and as an instructor I wanted to explain everything to him so he would develop,” Munson said.

Then, when the department’s training officer position opened up, Munson took on the role on an interim basis, and found training to be his passion. “When you walk in the door, you impact the department as a whole, all 84 people,” he said. “Every day is a new challenge.”

He became a captain, and headed the department’s training division. For the past five years, Munson has been a battalion chief, one of four shift commanders in the department.

Fire service is in Munson’s blood, and he started off as a volunteer in Southington, where his father and brothers worked. He specialized in industrial firefighting, and started off working in Naugutuck, but in July 1998 accepted a job in West Hartford.

Patrick Brooks was his first partner, Munson said. “He set the stage for my career, and created a foundation within me that showed what it was like to be a career firefighter.”

When he was promoted to apparatus operator, Munson said he learned to become the master of everything mechanical, and then as a lieutenant he appreciated the daily impact he had on the team.

One of the strangest calls he went on during his career in West Hartford was to remove a raccoon in a chimney. The raccoon, long dead, “was the shape of the chimney,” he said.

“I’ve rescued turkeys from storm drains, and the proverbial cat out of a tree.” He also once rescued a 15-year-old boy from a tree. The teen had climbed so high that the branches got very thin, and Munson said he had to set up the ladder truck to get him down.

As an apparatus operator during a major rainstorm in the early 2000s, Fernridge Park was flooded and the water had crossed the road and was lapping up against the picture window of a house across the street. “I walked a big German Shepherd across the ladder,” rescuing the dog from the house, Munson recalled.

One of the most difficult fires that Munson faced was a blaze in a multifamily  home on Prospect Avenue in 2012, when Munson was a lieutenant. [Editor’s note: I reported on that fire when I was the editor of West Hartford Patch, and here’s the link that shows some of the dramatic photos.]

“It was a challenging building, and the fire got into spaces we couldn’t really get to,” Munson said. He was very disappointed that the roof could not be saved, but he came up with a solution and turned the experience into a case study that is still used at the Connecticut Fire Academy, teaching others how to win with this type of building.

“It’s important to continue to strive when you go to a call,” Munson said. “There was no loss of life, but we were in a position to win and we didn’t,” he said of the Prospect Avenue fire. “Every one we’ve had since, it’s been success. We could deploy in a way that cut it off. That preparation put us in a position to succeed,” he said, noting success with a recent incident on Oakwood Avenue.

As a firefighter, the biggest challenge is ensuring that your own gear is checked and ready to go, and as a supervisor it’s making sure that everyone else is also ready to go. As a battalion chief, he came to understand the inner workings of the department, and has to make sure there is enough funding, that everyone is where they should be, doing their jobs.

“The challenges have far-reaching impact, balancing the needs of the community and the department resources,” Munson said.

As for what he considers most rewarding, Munson said, “When someone who works with me is promoted to a new position, it means I’ve shared my skill.” Watching Smith move up, he said, has been great.

Munson is humble about his achievement and impact, which not only includes redesigning the West Hartford training officer position to involve active learning at incidents as a safety officer, expanding the department’s rope rescue and vehicle rescue capabilities, and designing “train the trainer” initiatives and mentorships to develop future trainers and leaders, but also includes national recognition for his work on the National Fire Protection Association Technical Committee for the systems he has developed.

Munson earned a Distinguished Service Medal for his his contributions.

Smith doesn’t even know where to start in expressing his praise for Munson.

“When someone has the type of impact on an organization like Battalion Chief Munson has had here, you don’t let them leave without a little notoriety for all the extra effort,” Smith said. “All the added  hours. All the passion. All the times he could have maintained the status quo but chose to leave the department better by taking on a project or a problem.”

Smith said Munson embodies “brotherhood,” at work and in his personal life as well, always taking people under his wing.

Even before Munson officially held a training role, more than a decade ago when he was still an apparatus operator, he had developed a multi-day ground survival and mayday program that Smith participated in as a new hire. The program was based on real life situations involving firefighter fatalities, and designed to train personnel what to do if trapped in a collapse, how to bail out of a burning building headfirst down a ladder or using an escape rope. That program is still used today, Smith said.

Munson created policy and best practices with the Health and Safety Committee to reduce exposure to carcinogens. “Then he led by example, actually doing personal and equipment contamination after fires and fire training. He was a major influence on what has been a big culture change in our department relative to cancer prevention. When the highest-ranking guy on the shift sits on the ground and scrubs his gear clean, the rank and file tend to follow their leader,” Smith said.

It’s a testament to Munson’s skill as a trainer that the department has been able to do so much more training in house, also saving money that would have otherwise been spent on outside programs.

Munson was also a vocal advocate for the paramedic program, which the West Hartford Fire Department implemented in August 2016. Even though Munson is not a paramedic himself, Smith said he helped facilitate the change to enhance the program in a way that balanced fire protection with emergency medical services.

“He’s worth his weight in the gold bugles he wears on his collar,” Shea said.

Smith said that Munson cares about his people, takes care of them and gets dirty with them. He helps shovel hydrants after storms, makes sure crews have food and coffee on long overnight shifts. He teaches by doing and leads by example, said Smith. “Admitting his own mistakes so that others may learn from them, and never being one to shy away from rolling up his sleeves even as he has moved up in rank has earned him the reputation of a ‘firefighter’s firefighter,’ and there’s probably not a greater title in our business.”

Leaving West Hartford is a bit bittersweet, said Munson. “It’s an opportunity in front of me, and I can’t pass on this opportunity,” he said. “I’ve loved being in West Hartford, love the community.”

Fire Chief Gary Allyn said that Munson leaving is a big loss, but “an exciting opportunity for him.” Munson will be the second longtime employee to leave so far this year, following Apparatus Operator Kerry Warren, who joined the Milford (Connecticut) Fire Department in February.

“He’s done a lot here,” Allyn said. “Kevin’s got an affinity for training and loves to train people.” He had a tremendous impact on the department’s firefighter safety and survival procedures, Allyn said.

“He’s done an exemplary job here, but this is a great opportunity, and financially it makes sense,” said Allyn. Munson’s earned time will get him to his 20-year anniversary, allowing him to earn a sizable share of his pension, while he is young enough to have another fulfilling career. Allyn said he wished the timing could have been better to keep Munson for a higher level position in West Hartford.

Allyn said he has a list of possible candidates for Munson’s job, but in the meantime it will be filled by overtime as well as pre-arranged “swap time” with other battalion chiefs. He said the job should be filled by this summer.

As other fire department personnel hit the 20-year mark, Allyn expects other retirements. New hires will all be paramedics, he said, who if needed will be trained at the Connecticut Fire Academy, and he anticipates five or six will be hired out of a group that just took the test.

Munson lives in Canton with his wife, Shannon, 12-year-old son, Gavin, and 6-year-old daughter, Reilly. His final shift in West Hartford is a night shift on April 12 (which happens to be his birthday), and he will begin work in East Hartford on April 16.

Smith wants to make sure Munson knows how much of an impact he has made. “We’re not going to let him move on without making it clear to him how much we value and appreciate all that he’s done for this job, and that this community should be aware of all that he’s done to help enhance the fire department as a whole.”

Munson expressed his sincere thanks for all of the support he has received from the West Hartford Fire Department, and the community, over the past 20 years. “It’s been phenomenal. Learning, gaining experience, meeting incredible people. I’ve made lifelong friends,” he said.

“It never gets old. This is a really wonderful place and I will miss it,” Munson said.