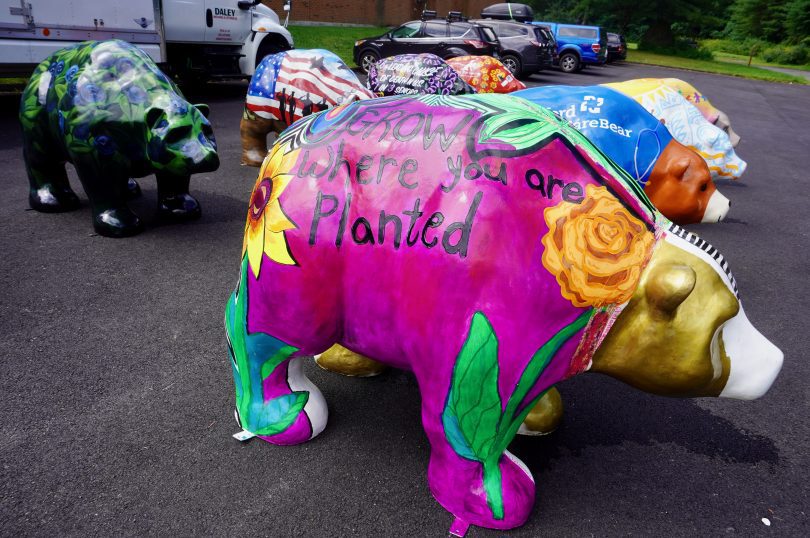 "Grow where you're planted" states a bear that benefits the Foundation for West Hartford Public Schools, sponsored by Modern Tire of West Hartford and created by Che’ La’Mora Hardy

The WEHA Bear Fair will begin with a ‘reveal’ in West Hartford Center on Aug. 31.

A dozen decorated bears departed Daley’s Den this week, and next Tuesday will lumber into West Hartford Center and Blue Back Square where they will be on display for the enjoyment of the public and as part of a unique fundraiser for a a variety of nonprofit organizations.

The 90-pound animals are crafted of fiberglass and each is 48 inches tall, 63 inches long, and 30 inches wide. While each life-size bear has been cast in the same mold, the similarity ends there.

We-Ha.com, along with Dennis House of WTNH, got a sneak peek at the bears this week as they acclimated to the outdoors in the Daley Moving & Storage parking lot. (Click here to see Dennis’ story which first aired Wednesday on WTNH.) 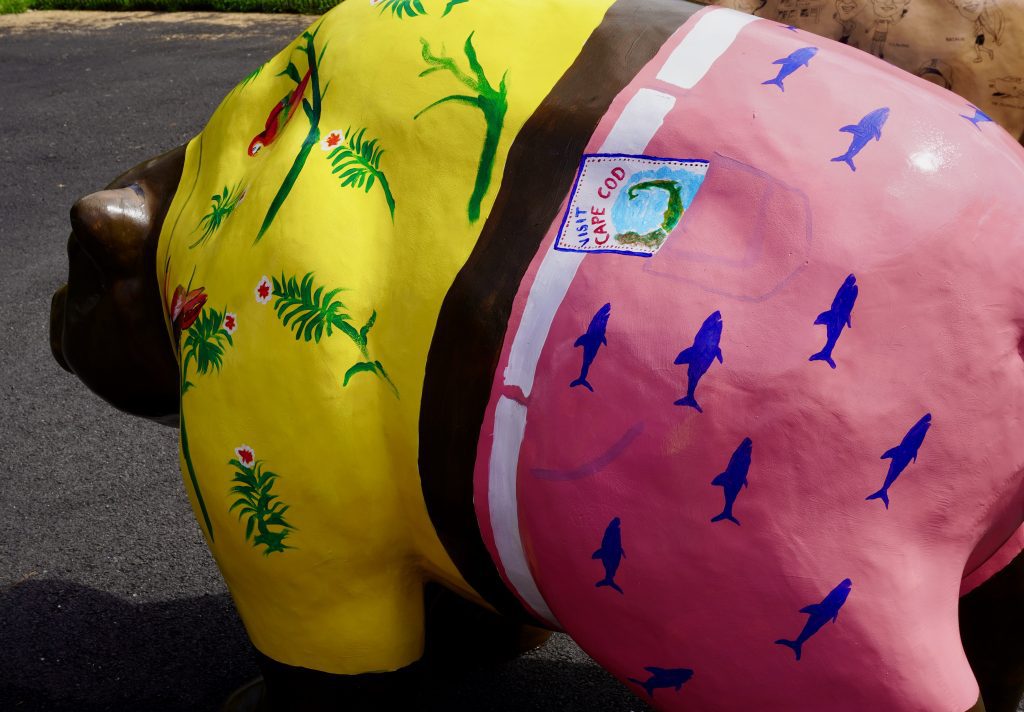 The beach-themed bear will eventually have a permanent den at the home of West Hartford Mayor Shari and Michael Cantor. It was created by Steve Hunter and benefits Westmoor Park

The designs range from a U.S. Army bear – complete with “bear tags” – created to benefit veteran support organization APK Charities, to a beach-themed bear sponsored by Cantor Colburn (that already has plans to find a permanent den in the garden of Mayor Shari Cantor and Michael Cantor’s home), to a bear wearing running shoes (Karhu brand, which has the tagline “run with the bear”) that features caricatures of those who donated $100 each to offset Fleet Feet Sports’ sponsorship cost. 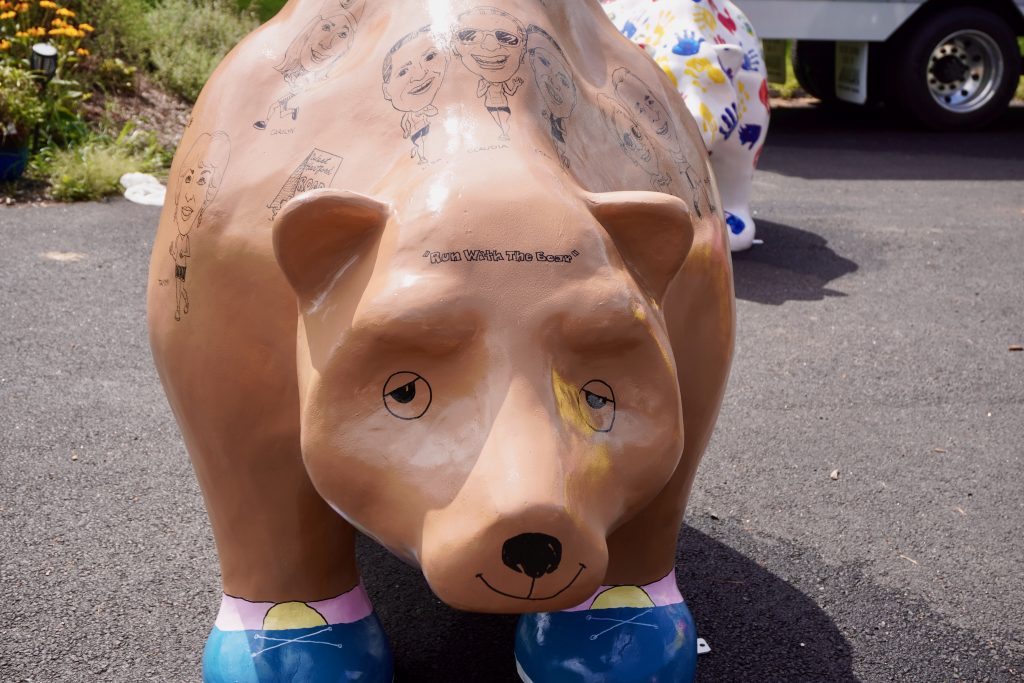 “Runs with the bear” is the tagline for Kahru running shoes, sported by this bear sponsored by Fleet Feet Sports. Photo credit: Ronni Newton

The methods of painting were diverse as well. The Elmwood bear was spray-painted by renowned artist Corey Pane, who recently created the racial equity mural on the side of the Noah Webster Library in West Hartford Center. The bear sponsored by Udolf Properties will be raising money for the Ronald McDonald House in Springfield, and is decorated with the handprints of those who reside there. 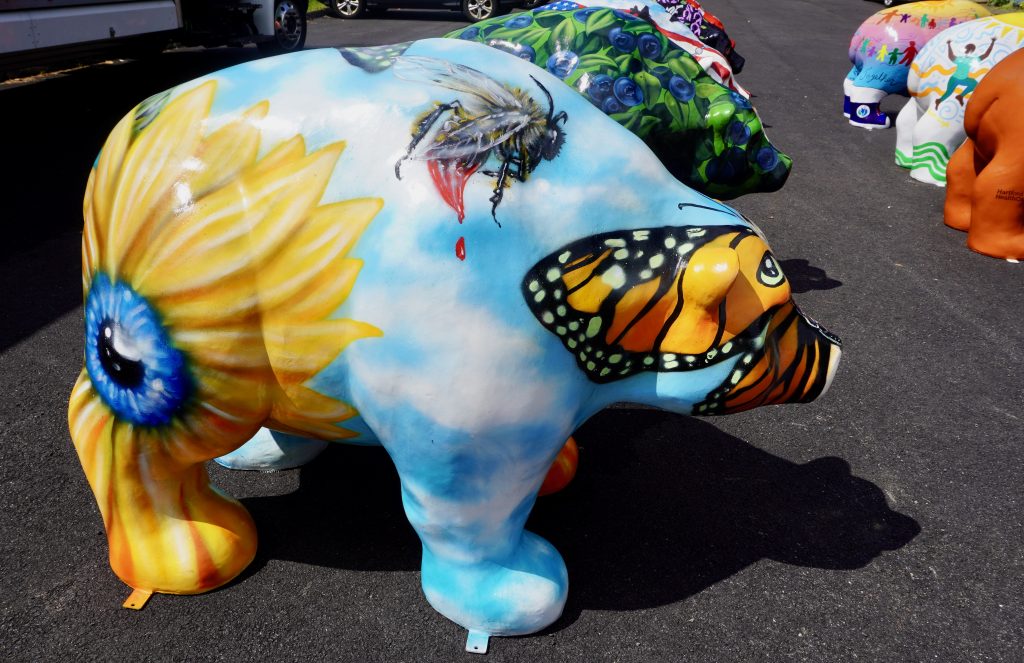 Several of the bears were painted at “Daley’s Den,” aka the Torrington warehouse of Daley Moving & Storage (a West Hartford Chamber of Commerce member and also one of the sponsors) and all 12 have been resident there for the past several weeks where protective sealant was applied and has been curing. Daley Moving & Storage will carefully transport them to West Hartford.

“We’ve been planning this for the last year-and-a-half, all during COVID,” said event organizer Tom Hickey of 20/20 Media. 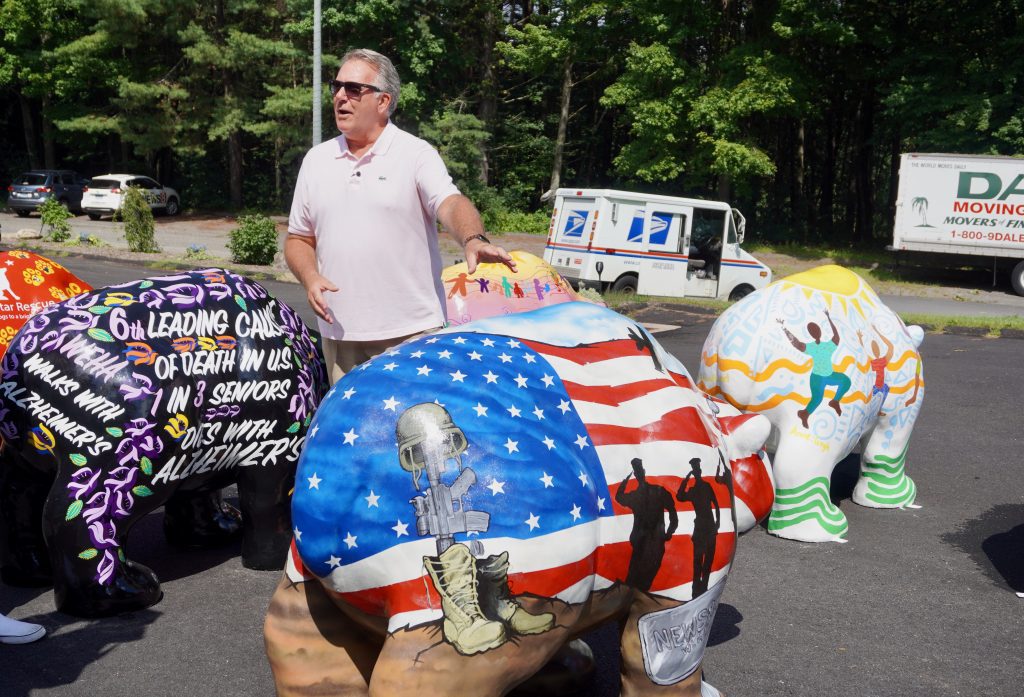 Event organizer Tom Hickey, pointing to the APK Charities bear, said, “I feel like we should salute it.” Photo credit: Ronni Newton

The Bear Fair is a similar concept to the Cow Parade that visited West Hartford in 2003 and 2007 – a display of public art that doubles as a community-wide fundraiser.

“Everyone has bears in their backyards these days,” Hickey said. He and other organizers thought the bears would be easily identifiable, and fun and safe way to spotlight local artists, nonprofits, and businesses.

Many nonprofits have suffered financially during the pandemic, as events were canceled. “This is a way for the community to give back and support the nonprofits,” Hickey said. 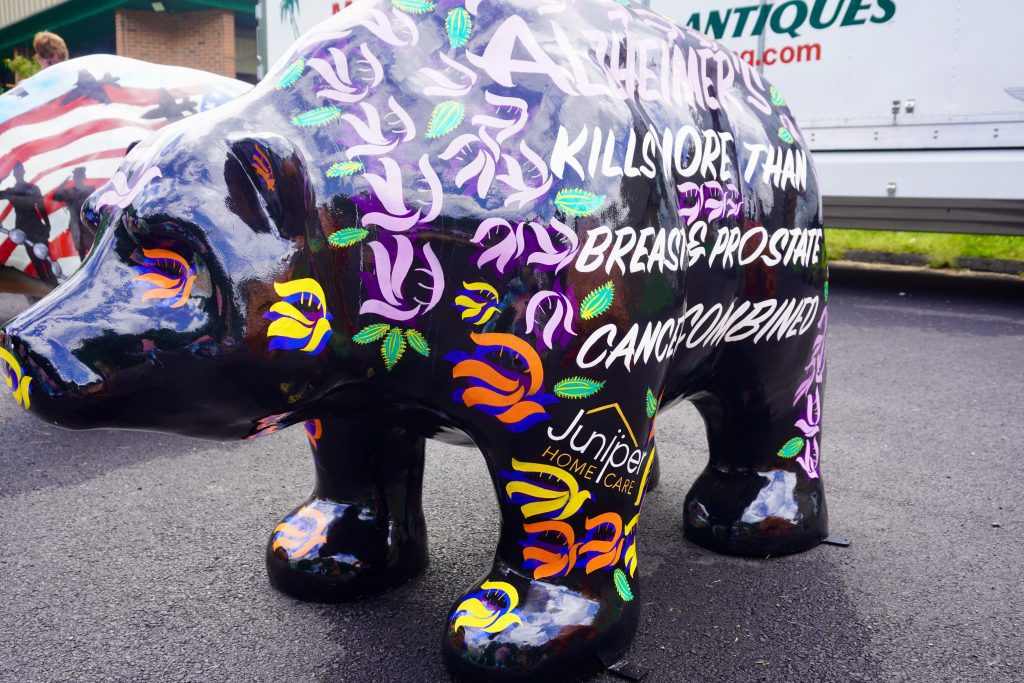 When the bears are placed around the Noah Webster statute and in the courtyard of Blue Back Square on Aug. 31, each will be bolted into a platform that will also display a unique QR code with a link to information about the artwork and the nonprofit. Those who come to view the bear will be able to make a donation directly from their smartphone, and 100% will go directly to that charity. 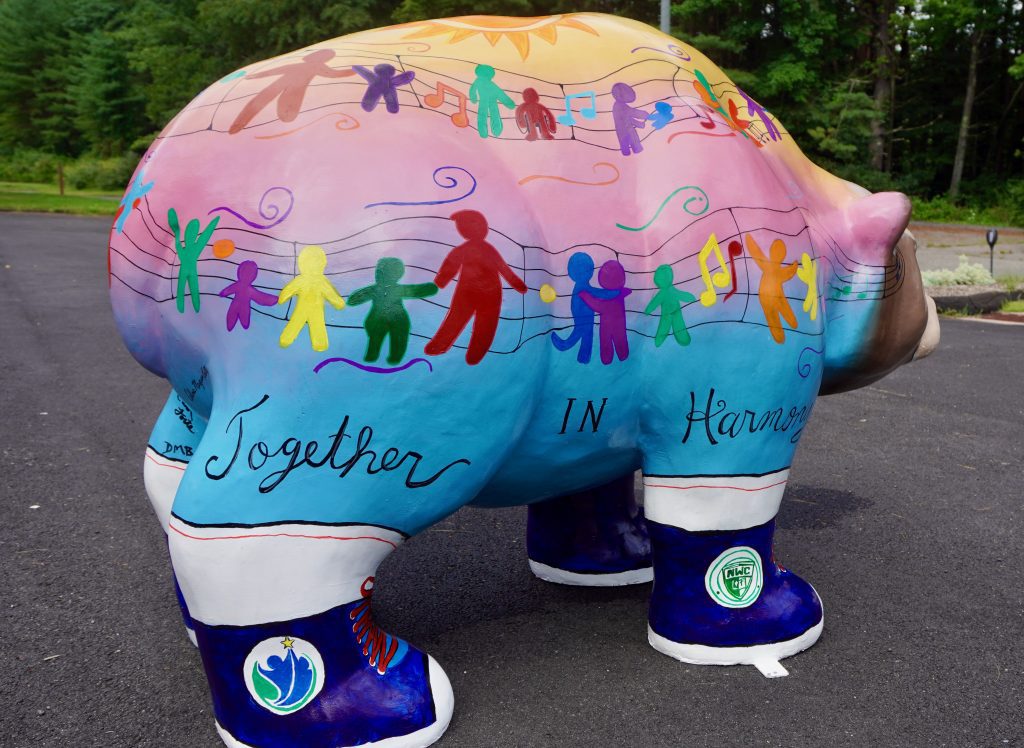 “For All Ages” was created by Northwest Catholic students and Duncaster residents. Photo credit: Ronni Newton

While the display is clearly an Instagrammable attraction, and  “paw-traits” with the bears will definitely be encouraged, Hickey said sitting on the bears will be discouraged.

The bears will remain on display at Webster Walk and in Blue Back Square through Oct. 29, 2021. Plans are for them to be relocated to a space, to be announced, where they can congregate indoors before heading to their “fur-ever” dens chosen by the sponsors. 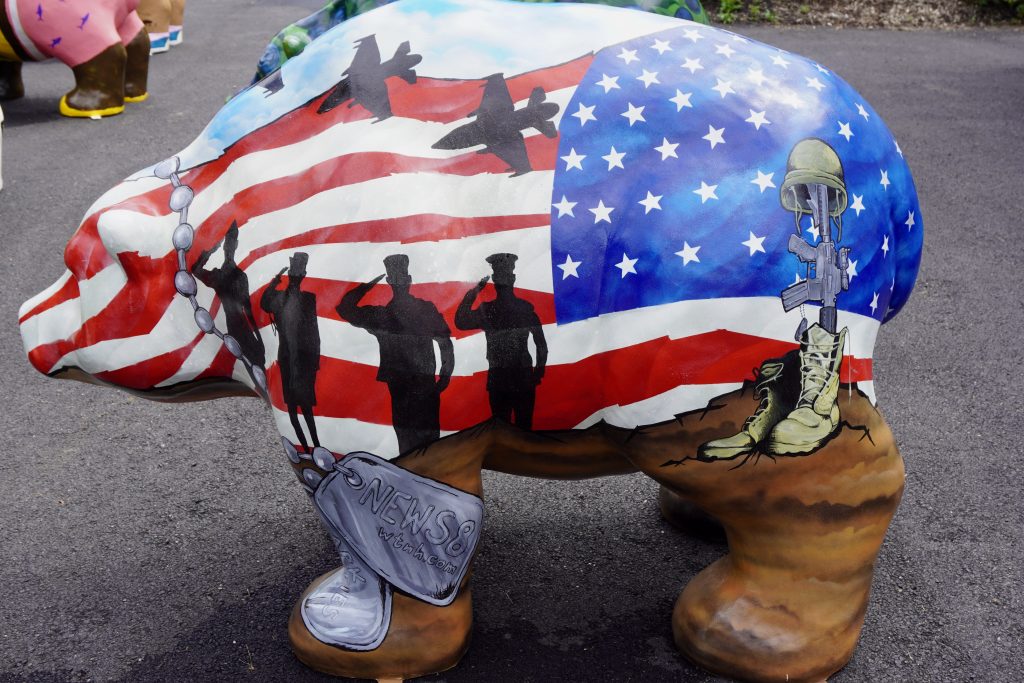 The Bear Fair sponsors, along with their designated non-profits and the artists designing their bears, include:

Details about the artists themselves, the nonprofit beneficiaries, and the sponsors – along with the opportunity to donate – can be found on the event section of the 20/20 Media website. 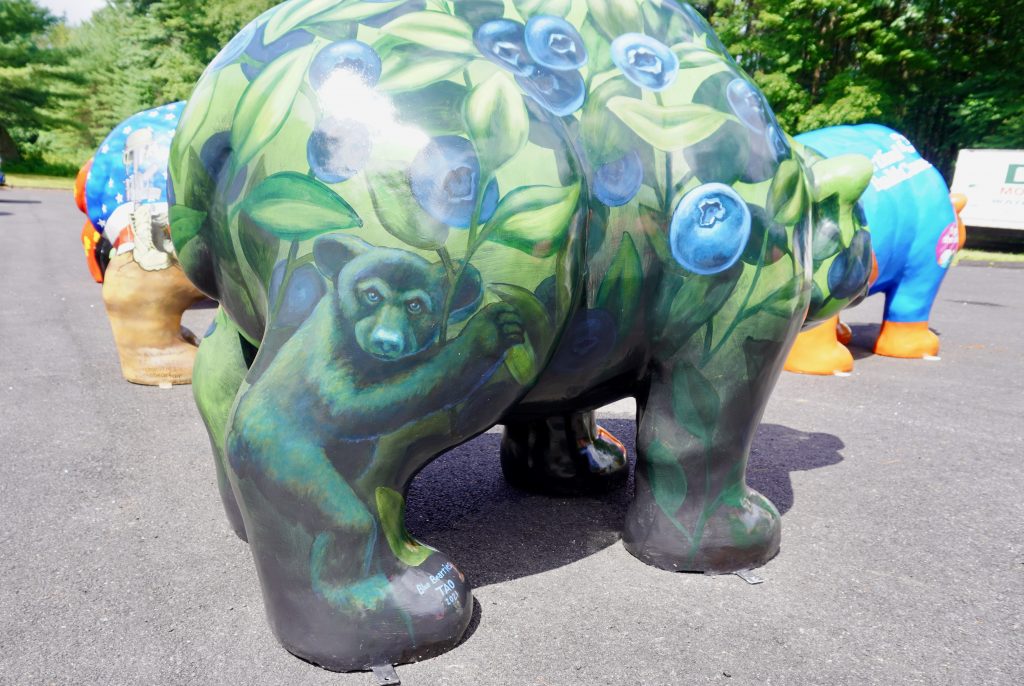 “Blue bearies” has a bear on a bear, and was painted by Art of Tao, and sponsored by Daley Moving and Storage to benefit The Bridge Family Center 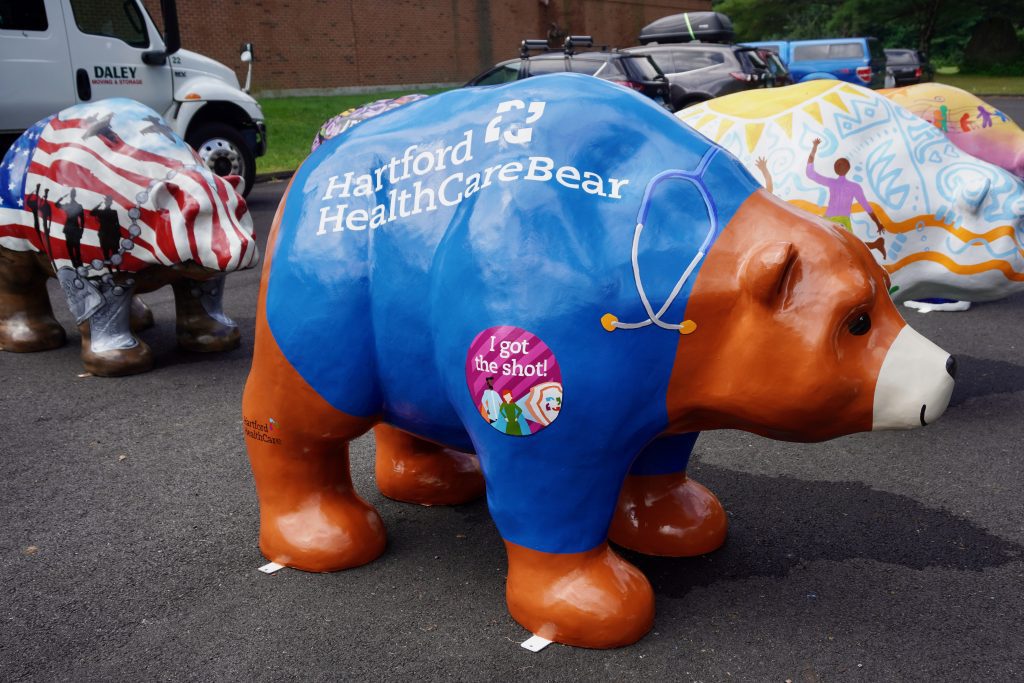 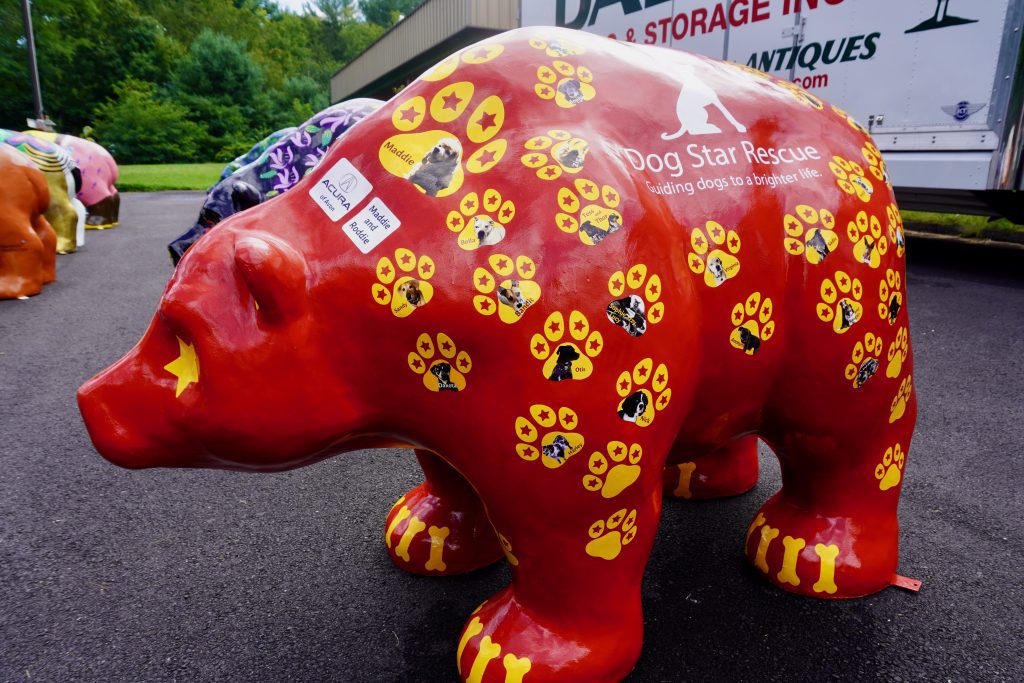 Dogs available for adoption cover the body of the Dogstar Rescue bear created by their staff and volunteers. Photo credit: Ronni Newton 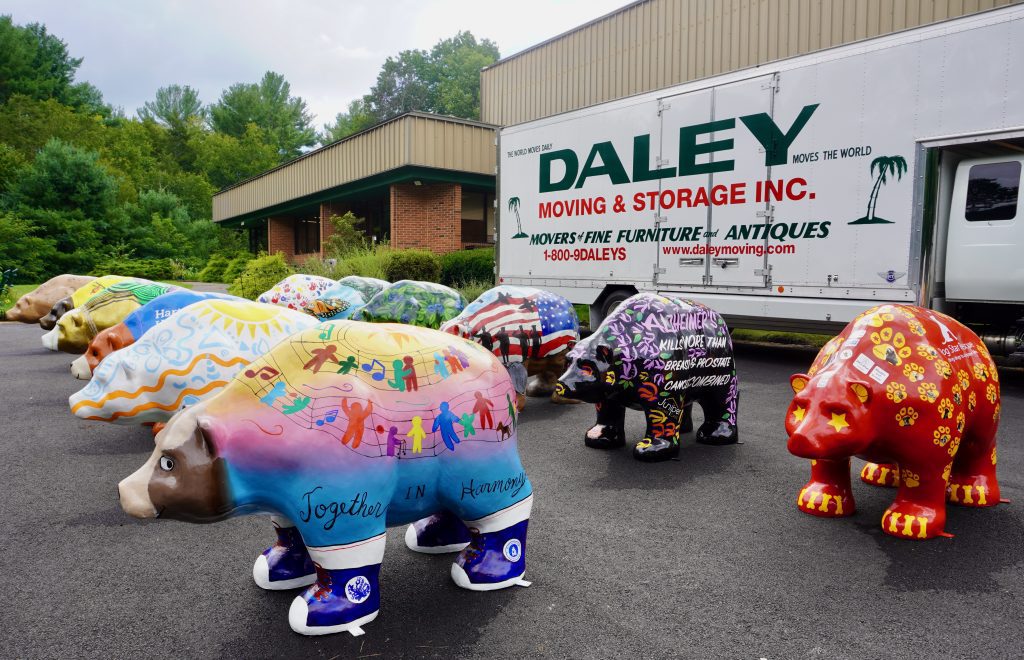 The final stage of the curing process for the WEHA Bear Fair bears is taking place in the parking lot of Daley Moving & Storage in Torrington. Photo credit: Ronni Newton