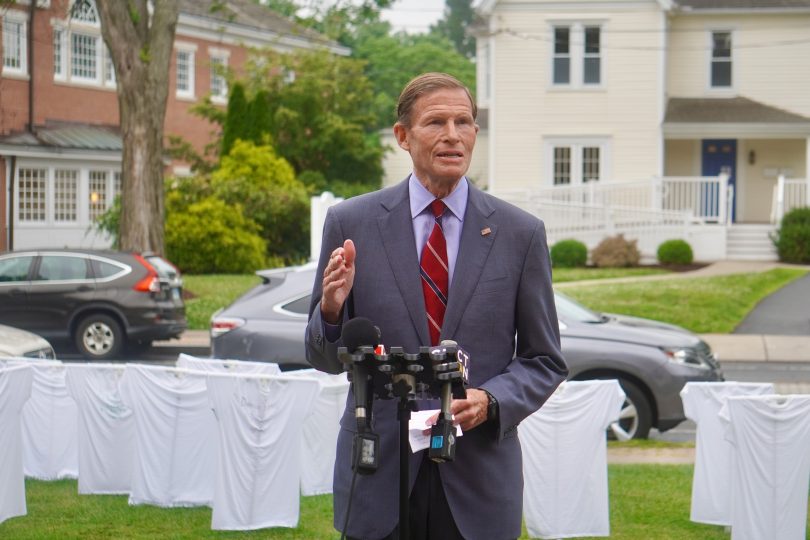 Sen. Richard Blumenthal and domestic violence prevention advocates used the ‘Memorial of the Lost’ in West Hartford as the backdrop for a press conference applauding the newly-passed Bipartisan Safer Communities Act. 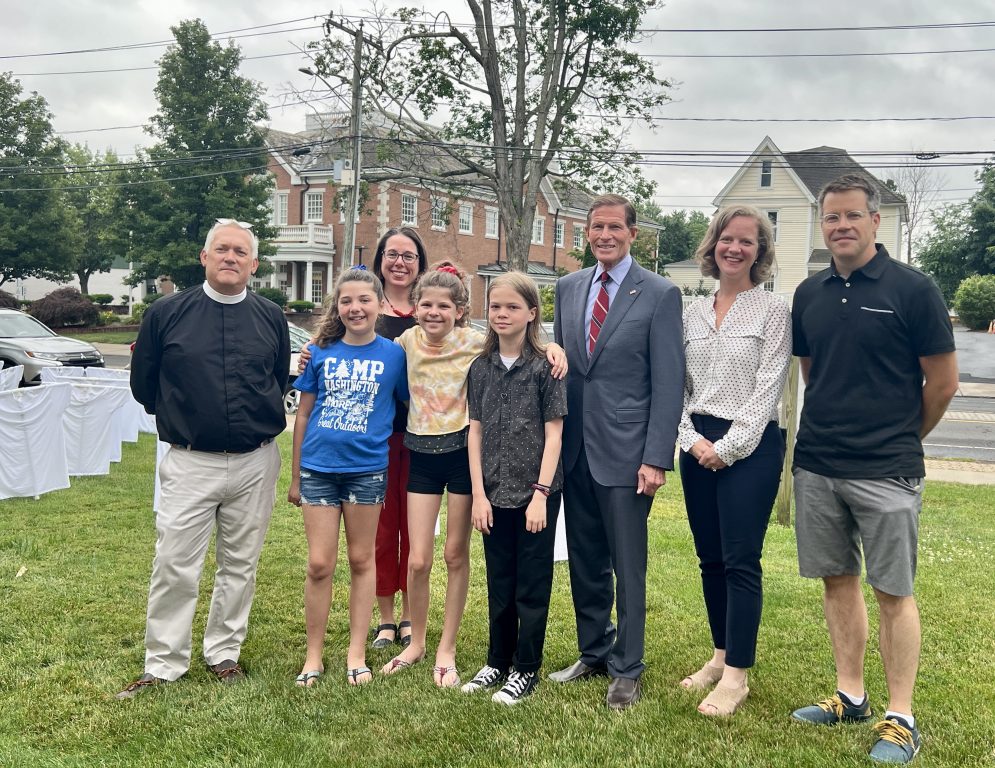 While the Bipartisan Safer Communities Act passed last week and signed by President Joe Biden is not perfect, it’s a major step in the right direction, U.S. Sen. Richard Blumenthal (D-Connecticut) said Monday in West Hartford as he stood at the doorway of St. James’s Episcopal Church, with the “Memorial of the Lost” in the background. 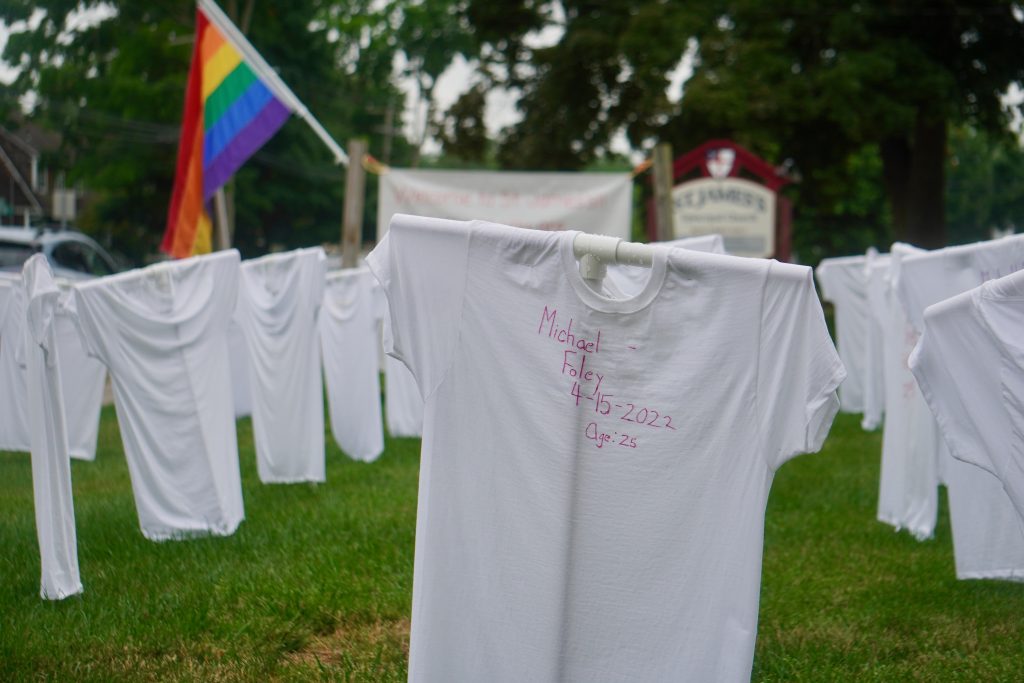 “This step is a major breakthrough,” Blumenthal said, after dozens of years of inaction at the national level on gun control legislation. Two-thirds of all intimate partner homicides – not just between couples who are married or have been married – occur with guns, and this Bipartisan Safer Communities Act makes it more difficult for those who have been convicted of domestic abuse to have a gun in their possession. Blumenthal, and U.S. Sen. Chris Murphy (D-Connecticut) were among those who drafted the legislation.

“This domestic abuse must be stopped,” he said. The measure is not perfect, but it reduces the “boyfriend loophole,” he said, “and it will save lives.”

The legislation includes a “red flag provision” that will provide $750 million for crisis intervention to keep guns out of the hands of those whom a court has determined to be a danger to themselves or others. The bill also provides additional funding for family mental health services and support after traumatic events.

“It is a step forward, not everything we wanted … but it is progress. Progress is better than nothing … particularly on closing the ‘boyfriend loophole.'” Blumenthal said. In the NCIS background check system, domestic abusers will be included even if they have not been married or have children with the victim.

Connecticut already has closed the boyfriend loophole and has red flag laws in place, which Blumenthal said have shown to be effective. “We can save lives and learn from Connecticut’s experience because Connecticut has shown the way on this provision and with red flag laws.”

Meghan Scanlon, president and CEO of the Connecticut Coalition against Domestic Violence, also said this legislation will make victims and survivors safer. 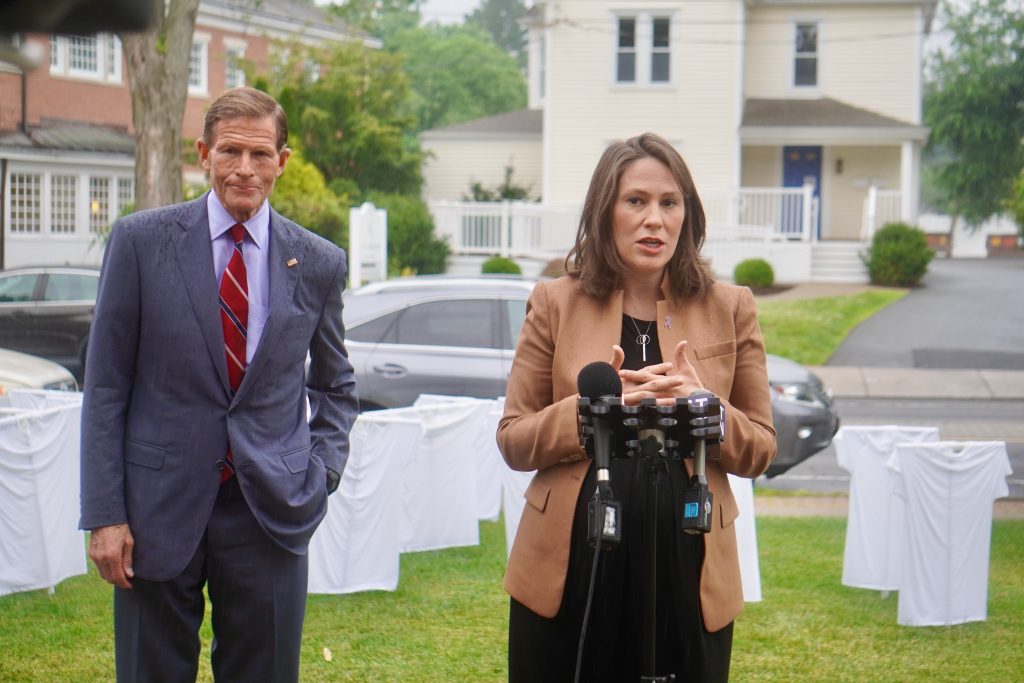 “We’re already seen that this type of legislation that closes the dating loophole does actually save lives,” she said.

“Every day as advocates we get up and we can choose to do nothing or do something and this legislation finally sent the message to victims and survivors not only in Connecticut but across the nation that their voices were heard, that there will be protections in place,” Scanlon said.

Intimate partner violence happens in dating relationships even among teenagers, she said, and can carry over to adulthood. “We’ve been fortunate in Connecticut to see a lot of these laws actually work. We’ve totally closed the dating loophole here. This legislation partially closes it at the national level … we’ve seen that it saves lives,” Scanlon said.

“The bigger piece is that one out of four women will be impacted by this,” she said, because the risk of intimate partner violence is high, higher than breast cancer and diabetes. “This is not just addressing a safety issue, but it’s addressing a public health crisis that we have in this nation.” 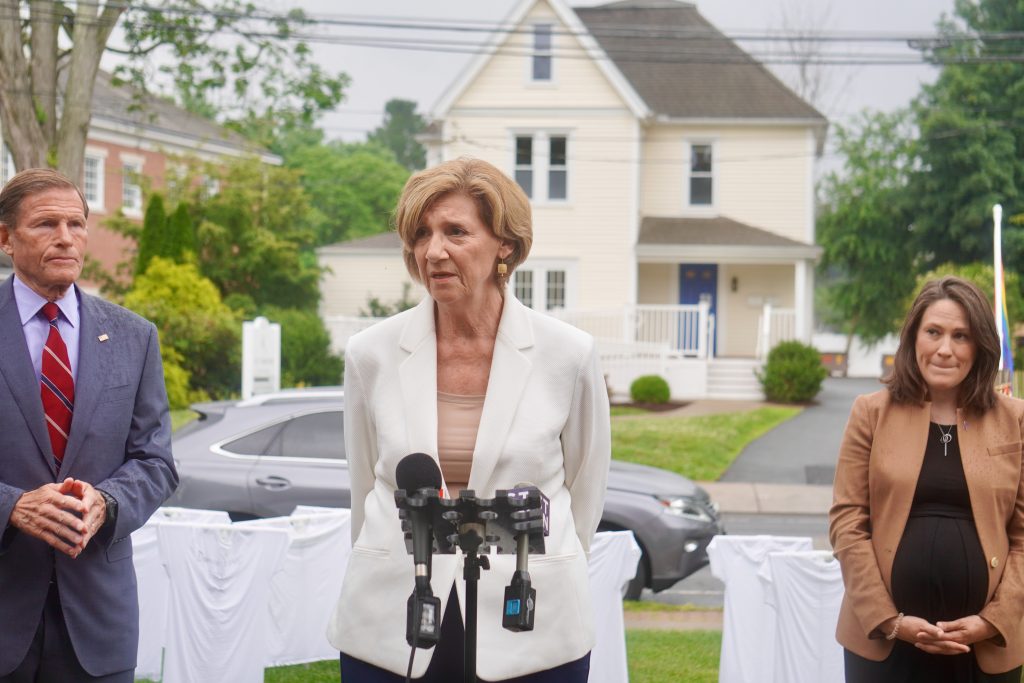 Katherine Verano, CEO of Safe Futures Connecticut, added that we are very fortunately to be in a progressive state like Connecticut.

“These shirts are physical symbols,” Blumenthal said of the Memorial of the Lost. “But the victims are all around Connecticut. … No place is immune from domestic violence.”

Rev. Bob Hooper, rector of St. James’s, said the “Memorial of the Lost,” which will spend two weeks in West Hartford before traveling to other Episcopal churches in the area, is a memorial to those who have been victims of gun violence in Connecticut this year.

Forty-one start white t-shirts bearing the names, ages, and dates of death of the victims, are planted on the church lawn, reminiscent of tombstones. Hooper said as of Monday, five more t-shirts with the names of victims will need be added at the end of this month.

Members of St. James’s Episcopal Church youth group were among those who created the memorial during a retreat at Camp Washington in Lakeside, CT. Several of the youth group members attended the press conference Monday. 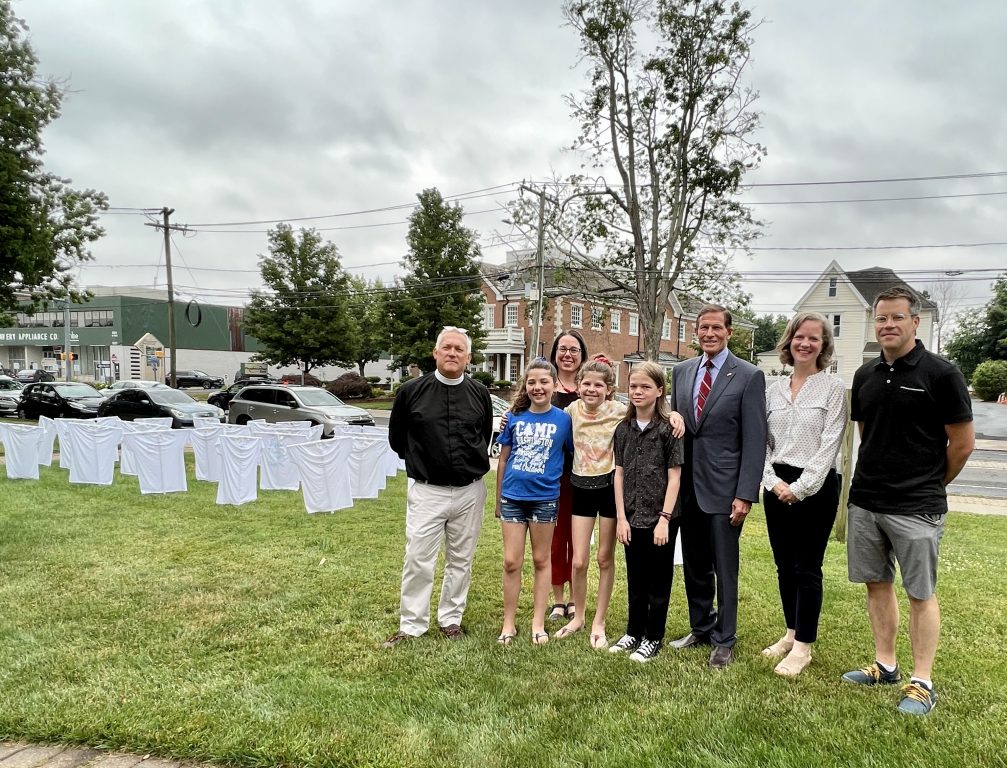