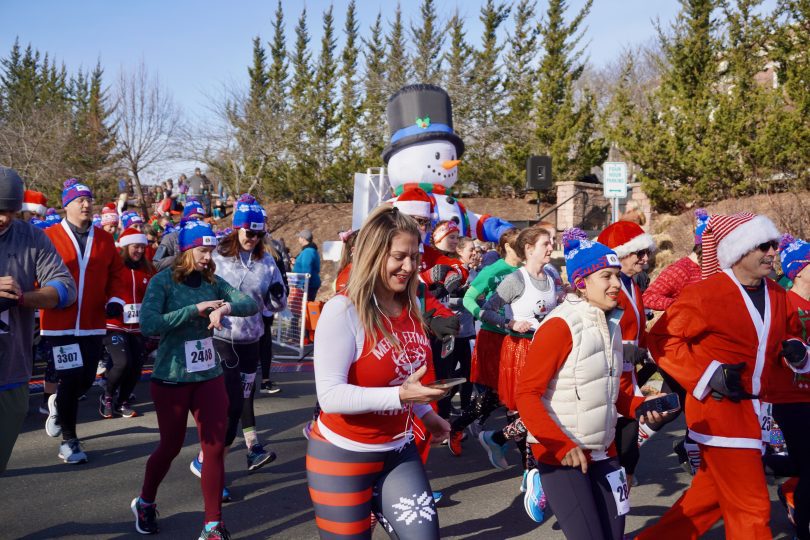 The Hartford Marathon Foundation’s annual Blue Back Mitten Run will begin and end in West Hartford’s Blue Back Square on Sunday, Dec. 4, 2022.

The Blue Back Square Mitten Run, a festive family-oriented 5K, will welcome runners and walkers of all ages and abilities to celebrate the season as a community for what is traditionally The Hartford Marathon Foundation’s final race of the year.

This year’s Mitten Run will also be the final event for HMF founder and CEO Beth Shluger, who on Thursday announced her retirement from the organization that she launched in 1994.

According to an HMF spokesperson, about 1,800 people are expected to participate in this year’s 5K, which winds through West Hartford neighborhoods where homes and businesses have been decorated for the holidays, and ends in Blue Back Square, where finishers will get a high-five from Santa and holiday cookies as a post-race treat.

Race participants are asked to bring donations of new hats, mittens, gloves which will be distributed by West Hartford’s The Town That Cares program to help keep those in need warm this winter. Collection boxes will be located in the Town Hall parking lot, where runners can also pick up their bibs and race swag – which this year is a pair of fleece lined mittens. Participants who have knit race beanies from previous years are encouraged to wear them for this year’s race, too.

Monetary donations will also be accepted at HMF registration and merchandise areas.

The 5K begins at 10:30 a.m. on Burr Street and the course has been modified slightly this year in the first mile for runner safety, utilizing Boulevard to avoid the I-84 ramp.

A ½-mile or 1-mile dash through Blue Back Square for kids begins at 10 a.m.

Registration information and other details can be found here.

The West Hartford Police Department has announced the following road closures for the day of the race:

Motorists can expect delays along the race route, and roads will reopen as runners pass. When possible, police will direct cross traffic during the race.

The Hartford Marathon Foundation has grown since its founding by Shluger in 1994 to include 25-30 races annually across Connecticut, Massachusetts, and Rhode Island. The flagship Eversource Hartford Marathon and Half Marathon (about half of which traverses West Hartford) will celebrate the 30th running in October 2023.

Event concepts have been expanded to be inclusive to participants of all capabilities and demographics, including walkers and families with young children.

“[T]he depth of impact stemming from the Eversource Hartford Marathon alone speaks volumes of Shluger’s legacy,” HMF said in a news release announcing Shluger’s retirement. “An estimated $185 million in economic boost can be traced back to race weekend since reporting began through the VISION Economic Value study.  The event has provided a platform for local charities to raise funds and awareness for important community causes, with more than $8.9 million in donations reported to date.”

Josh Miller, who currently serves as HMF vice president and race director, will assume the role of president on Jan. 1, 2023.  The HMF 2023 race calendar will be announced in mid-December, with registration opening shortly thereafter. More information can be found at www.hartfordmarathon.com.