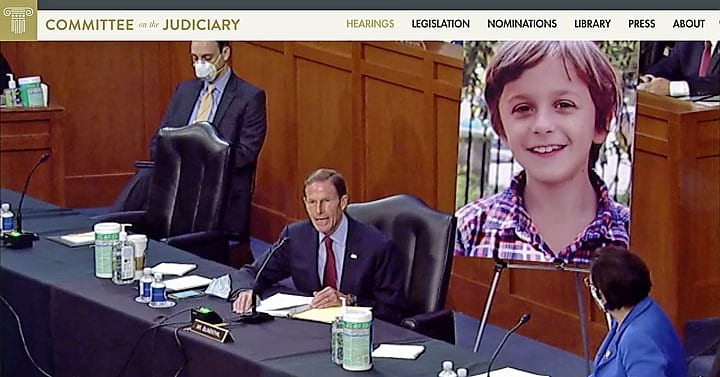 U.S. Sen. Richard Blumenthal shared an example of a Connecticut boys who suffers from a rare and incurable disease, and whose family relies on protections from the Affordable Care Act to maintain their insurance.

The Senate Judiciary Committee began Monday the first of four scheduled days of hearings on Barrett, President Donald J. Trump’s nominee to replace the late Justice Ruth Bader Ginsburg on the Supreme Court. Blumenthal was one of several Democrats to oppose her confirmation, which would cement a clear conservative majority on the high court before it takes up a case challenging the Affordable Care Act next month.

During his remarks, Blumenthal sat near a photo of Connor Curran, a 10-year-old Ridgefield boy who suffers from Duchenne’s muscular dystrophy. There is no cure for the rare disease, which predominantly affects boys and causes muscle tissue to waste away over time. Blumenthal said Connor and his family rely on protections in the Affordable Care Act to maintain his expensive health care coverage.

“Connor and millions of others like him are why I will oppose your nomination,” Blumenthal told Barrett during the hearing. “Your nomination is about the Republican goal of repealing the Affordable Care Act, the Obamacare they seem to detest so much. It’s about people like Connor, protections for people with preexisting conditions.”

Blumenthal accused majority Republicans in the Senate of rushing Barrett’s confirmation despite the coming presidential election. He said they were attempting to affect policy through the courts when they lacked the votes to pass legislation.

“You’ve been vetted, you’ve been screened by the Trump administration and special interests who want an activist judge. They want someone who will legislate from the bench and strike down laws supported by a vast majority of the American people,” he said.

During his remarks, Republican Sen. Thom Tillis, of North Carolina, accused Democrats of much the same thing.

“When the minority can’t get their bad policies passed in Congress they turn to the courts to demand that judges interpret the law, not as written but as they prefer,” he said.

Tillis said efforts by Democrats to pin down how Barrett may rule on specific policies were misplaced. Judges should interpret the law rather than try to create it, he said.

“Judges cannot and should not be policymakers. We’ve heard many speak today about policy priorities they’d like an activist court to pass. Several of my collegues have engaged in fear-mongering and described Judge Barrett’s nomination as an end to health care, abortion rights, labor rights and the list goes on and on and on. These statements are unfair and they’re untrue,” he said.

Democrats have also opposed Barrett’s confirmation because her nomination comes so close to an election when Americans are deciding on the president and in some cases their senators. Ahead of the 2016 election, the Republican-controlled Senate blocked President Barack Obama’s pick to fill a seat on the high court.

During the hearing, Blumenthal accused Republicans of breaking a promise not to confirm a Supreme Court nominee in an election year. But he was also looking ahead to the potential for a contested presidential election and the possibility that, like the 2000 election, the outcome ends up before the nation’s high court.

“Your participation – let me be very blunt – in any case involving Donald Trump’s election would immediately do explosive, enduring harm to the court’s legitimacy and to your own credibility. You must recuse yourself,” he said.