The West Hartford Board of Education will continue to review the Capital Improvement Plan proposed Tuesday night, and will adopt it on Feb. 4.

The West Hartford Board of Education on Tuesday night received the 12-Year Capital Improvement Plan (CIP), which includes a proposed $7,740,000 for 2020-21, and began the process of reviewing for final approval.

The CIP proposal incorporates ultimately installing air conditioning in all school buildings, and the Board will also consider adding funding for design and construction of additional lighted turf fields at the high schools.

The CIP is the funding of maintenance for the town’s school buildings and major infrastructure such as heating and cooling and security systems. While a 12-year plan is submitted, only two years of the plan are approved each year by the board. The planned expenditure for 2021-22 is $6,834,000.

Funds are appropriated annually by the Town Council as part of its budget approval process, and the majority of the CIP is financed through bonds as part of the town’s long-term financing model. For the 2019-2020 CIP, the Council reduced the $5,950,000 approved by the Board by $45,000 in the area of Furniture & Equipment replacement.

Continued work to complete security upgrades, including the addition of active shooter buttons, and exterior door replacement are a focal point in the upcoming years, Assistant Superintendent Andy Morrow told the Board Tuesday.

A new state mandate for a visual emergency notification system for students with hearing impairments is also incorporated into the proposed CIP, Morrow said. It will include a light system to be added in cafeterias, band rooms, and other places where it may be difficult to hear announcements. The estimated cost is $500,000 district-wide.

A discussion of the quality of air that is being circulated throughout the elementary schools in town was part of this year’s conversation as well – as it has been the past several years. While both high schools and all three middle schools are air conditioned, only two of the town’s elementary schools have air conditioning. Those schools, many of which were built in the 1950s, also have outdated air circulation systems and inefficient single-pane windows.

Morrow said this year’s CIP will contemplate beginning a 20-year program in 2022-23 “that will address the air quality for upcoming generations,” including air ventilation and window replacement for each of the nine elementary schools that have outdated air handling systems.

Director of Plant and Facilities Bob Palmer said that while the CIP is approved on a two-year basis, in the plan’s development there is a serious look at a three-year plan for requested funding.

Duffy Elementary School would be the first school to have air conditioning installed because there is “dire need of window replacement in that building,” said Palmer. Rooms in the two-story school have the original windows and original ventilation system from the 1950s, and some windows were sealed over during the 1970s energy crisis which actually reduces the flow of fresh air through the building.

The project would take place during the summer, and half of each school would be done over the course of a summer. When that school is completed, work would move onto the next elementary school. Beyond starting with Duffy, there is not a plan for the order of the schools, Palmer said.

Earlier in the meeting, the Board received a report on enrollment projections from Director of Finance and Planning Elizabeth Hewitt and Chip Ward – who retired last year but returned in a consulting role to assist in preparing the multi-year projections this year. That report can be found in its entirety here and in PDF form below.

An overall steady decline in enrollment in West Hartford Schools of about 91 students per year is being anticipated, based on the number of births in the state and a calculated Cohort Survival Ratio.

“The only two districts in the state to have significant growth have been South Windsor and Rocky Hill,” said Superintendent Tom Moore. He added, however, “Even though there has been a drop in enrollments for us is hasn’t been as much as other districts.”

While there are no plans at this time to close any school buildings, “We will be taking the enrollment projections into consideration” in the determination of schools to receive air conditioning, Morrow said. “This is also a 20-year process so we will have plenty of time to make adjustments.”

As part of the proposed CIP, removal of modular classrooms will take place. Not only are they unnecessary at enrollment levels, Palmer said, but most have long exceeded their expected lifespan of 15-20 years and they are very inefficient from an energy usage standpoint.

Other major projects included in the CIP are roof and boiler replacements, removal of old carpeting and flooring replacement, new visitor bleachers at Conard, restroom renovations, driveway paving, and replacement of playground equipment. Most of the work on CIP items is done during the summer, and Palmer said sometimes projects need to be be postponed or work shifted due to timing as well as cost factors.

Solar panels are being installed at schools as roofs are replaced, Palmer said in response to a question from Board Chair Deb Polun. The town does not own the panels and they are installed and maintained under a 20-year purchase agreement, other than at Charter Oak where they were mostly funded by a state grant for the new school.

King Philip will be receiving a new solar installation, which due to the layout of the building will be the largest in town and will provide about 90 percent of the power for the building. “Any opportunity we have we do it,” Palmer said.

Republican Board member Mark Zydanowicz also brought forward a new item that he asked to be included in the CIP: the addition of two new turf fields.

Since it is no longer possible to light Sterling Field (located adjacent to Charter Oak), and because poor weather conditions often lead to field closures, the importance of new turf fields with lighting have been a topic of discussion for the past five years in the community, particularly by the membership of various sports leagues.

“We invest a lot of funding toward different items inside the classroom … when you go to a different district and you look back at West Hartford …” said Zydanowicz, the athletic facilities compare very poorly. Education is second to none in West Hartford, but there is a significant need for more and better practice fields.

Two proposed fields– one each at Conard and Hall – would be synthetic turf and include lights. They would be available to all town sports clubs, especially in the fall when it tends to get dark earlier and will afford teams more space to practice. There have recently been situations when six teams at a time are trying to practice on the turf at Conard, Zydanowicz said.

Moore said Zydanowicz had raised the issue of additional turf fields last fall, and he asked Morrow and Palmer to study it. They used a recent field installation at Avon High School as a guideline and distributed a handout (see photos below) to Board members with the proposed location for a field at each school.

The Town Plan and Zoning Commission (TPZ) would also need to approve the lighted turf fields, and that could be a lengthy process – which in addition to economies of scale is one of the reasons it may make sense to consider both at the same time.

New LED lighting technology would result in even less “light bleed” than we have now with the existing turf fields, Palmer said.

While the town would need to allocate the funds, Zydanowicz said there is “a good appetite for fundraising for this as well.” He said the soccer league had already contemplated installing a lighted turf field and financing the entire project itself.

Moore said when the Board votes on the CIP on Feb. 4, they will first entertain a motion to include the turf fields as part of the CIP. The design costs (about $300,000 total) would be included for 2021-22 in order to have that information before bringing the project to TPZ for review. The remainder of the field costs would be considered for 2022-23. 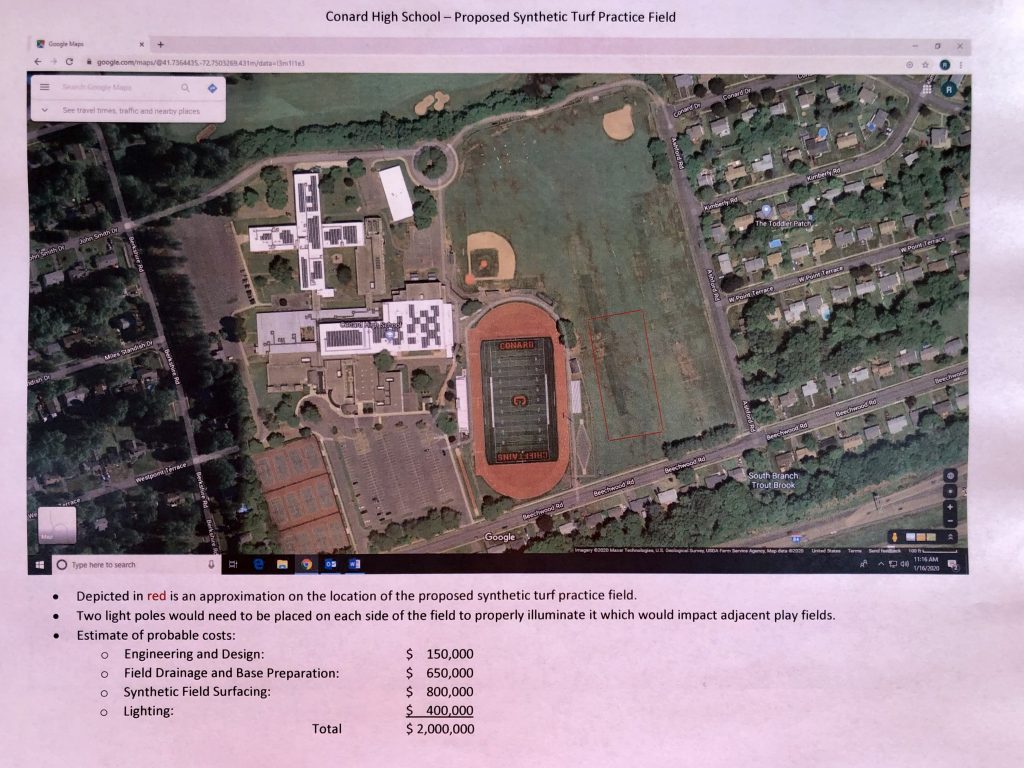 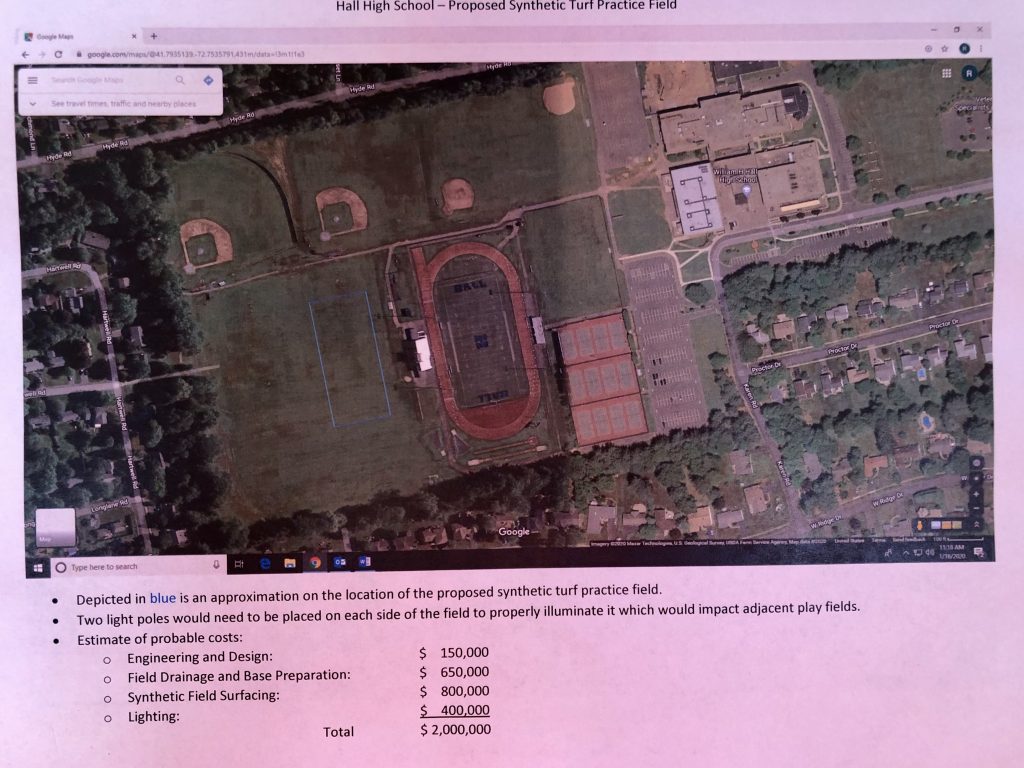