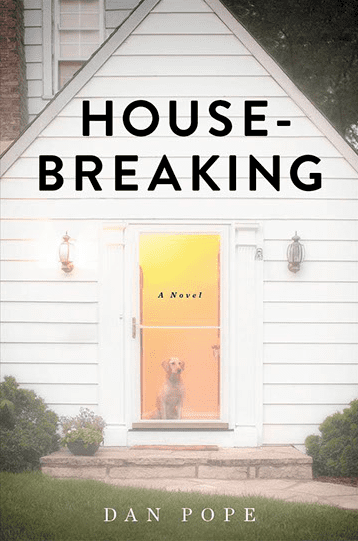 By John B. Valeri

Don’t judge a book by its cover. Readers would be wise to keep that old adage in mind as they crack open West Hartford resident Dan Pope’s 2015 novel, Housebreaking (Simon & Schuster). At first glance, the cover art – a dog peering out from the front door of a well maintained home in a suburban neighborhood – might indicate stability, or tranquility, or whatever it is that we equate with such imagery. But appearances don’t always reflect realities, and any false sense of security this façade invites is quickly dispelled.

As the story opens, readers are introduced to Benjamin (“Ben”) Mandelbaum, husband and father of two, who has just been sent packing by his wife after a supposed infidelity; it wouldn’t be his first. Lacking options, he comes calling on his father, Leonard, a recent widower living in the fictitious, and seemingly idyllic, town of Winterbury – a thinly veiled homage to West Hartford (Crate & Barrel! Starbucks! Oh my!) Leonard is happy for the company (though a health crisis temporarily, and conveniently, removes him from the house), and Ben – accompanied by his trusty dog, Yukon – reclaims his childhood bedroom, which has remained a shrine to his adolescence.

Much to Ben’s delight, he discovers that his teenage crush, Audrey Martin, has just moved her family into a fixer-upper down the block. Though Audrey was untouchable in high school, Ben concocts a scheme befitting of his juvenile nature to bring them face-to-face as adults – and finds, somewhat surprisingly, that she is now happily receptive to his advances. The two quickly embark upon an affair, each desperate for what the other can provide them, though their respective scars hover over the relationship like a specter. For instance, despite having a husband and daughter at home, Audrey has an obvious emotional disconnect that allows her to risk everything for a few moments of reckless abandon in an otherwise numb existence.

Multiple subplots – including a series of neighborhood robberies, an unexpected late-life romance, teen rebellion, and office politics – serve to bolster the idea that little of people’s lives is actually as transparent as it may seem. These threads also demonstrate how ambition and intent can have dramatically different results, depending on the circumstances, the stakes, and the ability to see beyond oneself. Ben, who is largely alone in the world for the first time during his separation, plays a subtle-yet-significant role in many of these dramas, and it’s his ability to empathize with, and even empower, a supporting cast of characters that most demonstrates his growth into the adult he was always meant to be.

Housebreaking is a heartrending, and occasionally hilarious, missive about (mostly) likable people doing (mostly) unlikable things. Though satirical in tone, there’s an underlying poignancy at its core that transcends mere entertainment. Ultimately, Dan Pope reminds us that we are all projections of belief and expectation (whether our own or others’) – and that we sometimes need to get lost before we can find ourselves, or be discovered. It’s appropriate, then, that this book’s substance far surpasses its stylistic shroud.