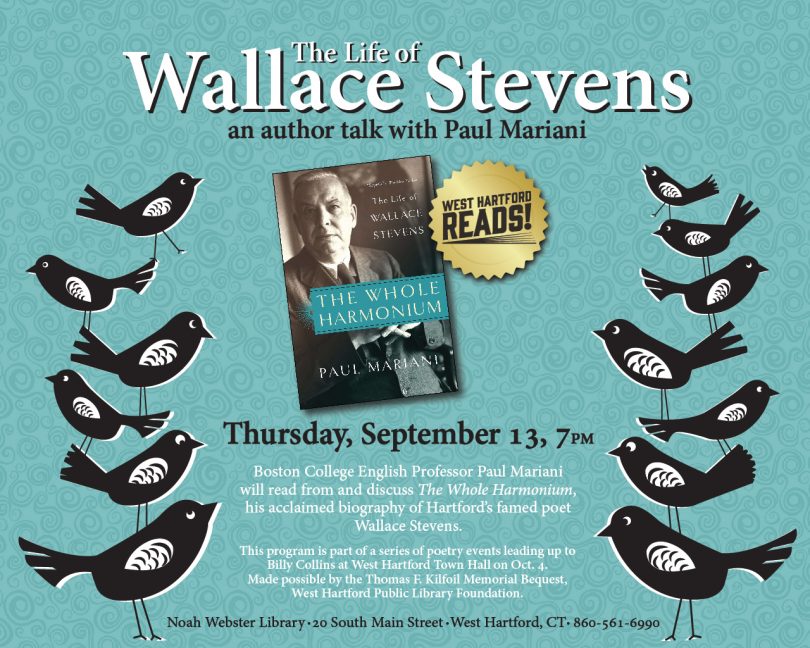 Paul Mariani will host a reading and book discussion on Sept. 13 at the Noah Webster Library in West Hartford Center. 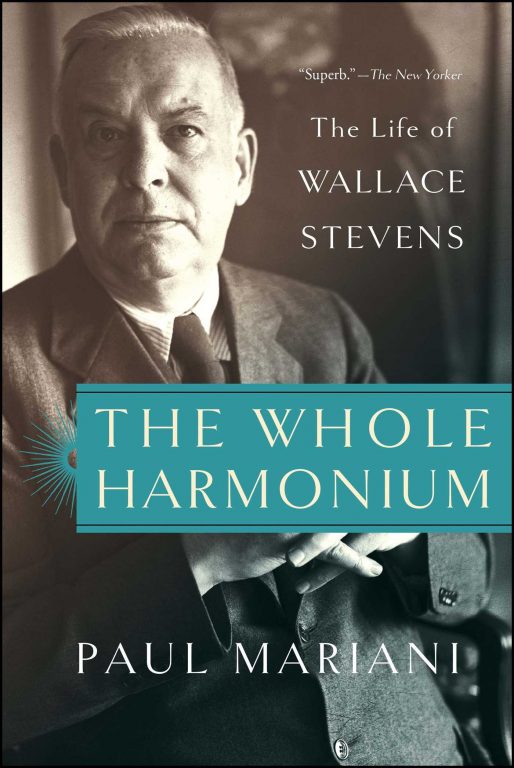 Boston College Professor Paul Mariani, author of the acclaimed Wallace Stevens biography The Whole Harmonium: The Life of Wallace Stevens, will read from and discuss his book at the Noah Webster Library on Thursday, Sept. 13 at 7 p.m.

Mariani’s book explores the life of Wallace Stevens (1879-1955), the great American poet who spent most of his life working as an insurance company in Hartford, CT. Stevens lived a richly imaginative life that he expressed in his poems. A lawyer who rose to become an insurance company vice president, Stevens composed brilliant poems on long walks to work and at other stolen moments.

Stevens endured an increasingly unhappy marriage, and yet he had his Dionysian side, reveling in long fishing (and drinking) trips to the sun-drenched tropics of Key West. He was at once both the Connecticut businessman and the hidalgo lover of all things Latin. His first book of poems, Harmonium, published when he was 44, drew on his profound understanding of Modernism to create a distinctive and inimitable American idiom. Over time he became acquainted with peers such as Robert Frost and William Carlos Williams, but his personal style remained unique.

The complexity of Stevens’s poetry rests on emotional, philosophical, and linguistic tensions that thread their way intricately through his poems, both early and late. And while he can be challenging to understand, Stevens has proven time and again to be one of the most richly rewarding poets to read.

After its publication in 2016, The New Yorker called Mariani’s biography “an excellent, superb, thrilling story of a mind … unpacking poems in language that is nearly as eloquent as the poet’s, and as clear as faithfulness allows.” Booklist called the biography, “incandescent….redefining biography of a major poet whose reputation continues to ascend.”

Mariani is the author of 18 books, including seven volumes of poetry and biographies of Robert Lowell, John Berryman, Hart Crane, Gerard Manley Hopkins, and William Carlos Williams, which was a National Book Award finalist. 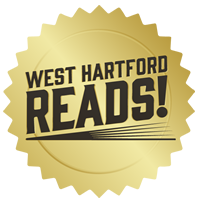 This event will take place shortly before Wallace Stevens’ 139th birthday on Oct. 2, and is part of a series of West Hartford READS! events hosted by the West Hartford Libraries between June and a Billy Collins reading at West Hartford Town Hall on Oct. 4. Other events in the series included book workshops and readings, including a packed house that attended Trinity Professor David Rosen’s presentation, “Who’s Afraid of Wallace Stevens?” in early August. These events are made possible by the Thomas F. Kilfoil Memorial Bequest, West Hartford Public Library Foundation.

For more information on all the West Hartford READS! events and programming, go to http://bit.ly/westhartfordreads

This event is free and open to the public, but seating is limited so please register for the event online (http://bit.ly/wholeharmonium) or by phone at 860-561-6950. Books will not be for sale at this event, but you may bring your copy for signing after the presentation.

Event Parking: There is ample library event parking in the nearby Isham Garage. Please bypass the garage payment kiosks and come directly to the Information Desk on the main floor of the Noah Webster Library, 20 South Main Street, where you may validate your parking with your license plate number and then proceed to the Learning Lab for the program.

Paul Mariani is the University Professor of English emeritus at Boston College. He has published 250 essays, introductions, and reviews, as well as scholarly chapters in anthologies and scholarly encyclopedias, and is the author of 18 books, including biographies of William Carlos Williams, Berryman, Lowell, Hart Crane, Hopkins, and – most recently—Wallace Stevens (Simon & Schuster 2016). He has published seven volumes of poetry, most recently Epitaphs for the Journey, as well as a spiritual memoir, Thirty Days: on Retreat with the Exercises of St. Ignatius. His awards include fellowships from the Guggenheim and the NEA and NEH. He is the recipient of the John Ciardi Award for Lifetime Achievement in Poetry. For fifteen years he taught at the Bread Loaf Writers Conference and another fifteen years at the Image Conferences in Colorado, Santa Fe, and Seattle. His life of Hart Crane, The Broken Tower, a feature-length film, directed by and starring James Franco, was released in 2012. He served as Poetry Editor of America Magazine from 2000—2006. His poetry has appeared in Poetry, Image, The Agni Review, First Things, New England Review, Hudson Review, Tri-Quarterly, The Massachusetts Review, New Criterion, Ploughshares, Prairie Schooner, Quarterly West, Sewanee Theological Review, Gettysburg Review, Santa Clara Review, Doubletake, Boston College Magazine, and Southern Quarterly, as well as in numerous anthologies of contemporary poetry. https://www.poets.org/poetsorg/poet/paul-mariani