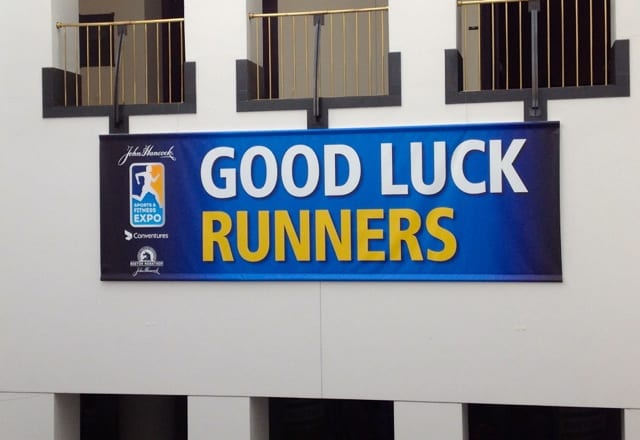 More than 30,000 runners will attempt the 26.2 mile journey of the Boston Marathon. Photo credit: Ronni Newton

Sometimes it’s better to focus on the journey, and smaller goals, rather than a bucket list. 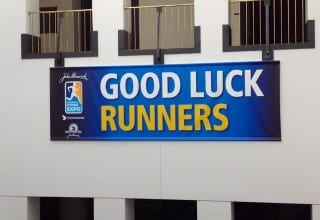 More than 30,000 runners will attempt the 26.2 mile journey of the Boston Marathon. Photo credit: Ronni Newton

I’ll be there in Boston, watching my husband and more than 30,000 other runners complete an incredible journey.

We went to the expo on Saturday and picked up his number. Although I watched the race three years ago, I hadn’t ever been to packet pickup. Just seeing all the runners, excited and nervous, was a moving experience. Some of it was because of the “Boston Strong” attitude in response to the 2013 bombing, but running Boston has always been something special.

I’ve never been a big “bucket list” person, but since 2001 if I was ever asked what was on my bucket list, I would have said the Boston Marathon. Not just running it, but qualifying to run it.

I ran my first marathon in Hartford in October 2001 in 3:58:23. I was 40 years old. I told my friends that I just wanted to finish and if I had a goal it was to run a 10-minute mile pace which would have taken 4:22. My secret goal was beating 4 hours, and thanks to months of training and lots of willpower, I did just that. I wasn’t trying to qualify for Boston, but I had read that Oprah had run a marathon in under 4 hours so I figured I should also be able to do that. 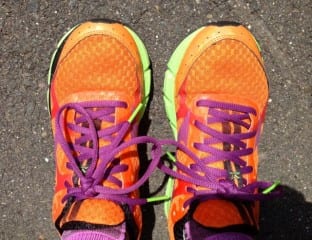 Even though that was my first marathon I was hardly a novice runner, and I had friends who had run Boston. A sub-four-hour time wouldn’t be fast enough to qualify me for Boston until I turned 45, but I was fairly confident at the time that I could keep up my speed, train well, and qualify in 2006.

But life’s trials and tribulations got in the way. I was training well in the summer of 2006 until I rolled an ankle walking to the beach in my flipflops the day before a scheduled 18-miler. Which I ran anyway. It was several weeks before I recovered from the serious sprain and could run again, and the 4-hour marathon was postponed.

I was diagnosed with breast cancer in the March of 2007, so I postponed my marathon goal again, but not for long. In February 2008 I ran the National Marathon to Fight Breast Cancer (now called 26.2 with Donna) in Jacksonville. I trained well through a frosty winter in Connecticut, but the temperature reached 83 degrees during the race. I hit the wall at mile 20 and although I finished the race, I walked for several straight miles. I had to promise a race official that I would walk, not run, because she was about to pull me off the course. There was no way I was going to quit though.

In 2009 I decided to try to run the Hartford Marathon again. The training was going really well, until … I broke my left foot. It was my first broken bone ever – other than a toe. It happened while running, but I’m pretty sure what the doctor called a stress fracture was actually the result of a piece of furniture falling on my foot while I was helping my sister move a few days earlier. I was in a boot for months and wasn’t allowed to run at all for 6 months.

I ran again as soon as I could, and have done several half marathons since then, but 13.1 miles, not 26.2 miles.

I’ve taken Boston off my bucket list, but I’ve also gradually decided that I don’t need a bucket list. 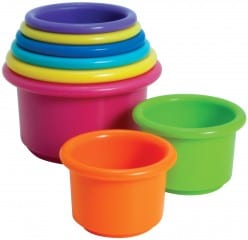 I’m instead focusing on smaller plastic cup-sized goals. The incremental goals that aren’t so mighty but can be stacked together, like those plastic cups my kids used to play with when they were babies and toddlers.

Every time I’ve been injured I have always come back to running. My license plate says “RUN MOM,” but that’s not the only reason I keep going. The older I get, the tougher it is to start over, like after missing a few months this winter.

I had some nagging knee pain last fall and then it was cold and snowy so I decided to focus on gym workouts this winter. Then I fell on the ice in my driveway on Valentine’s Day and broke my wrist. I was afraid to even walk outside for weeks, let along try running with a cast on my arm.

Two weeks ago I got back to running, but I’m much slower than I’ve ever been before and I need to work to meet some new goals.

I love to write columns in my head when I run by myself, and that’s what I did last week. Then I realized I had pretty much already written the same column in November 2013, about it being more about the journey than how long it takes to get there.

This time I had the thought about the plastic cups, the little goals that can be reached and then stacked together. They may not add up to a bucket list, but I don’t think they need to.

I’m not sure if I will ever put anything on a bucket list. I may do something amazing (like when I went zip lining last summer) and then decide it should have been on my bucket list and add it after the fact.