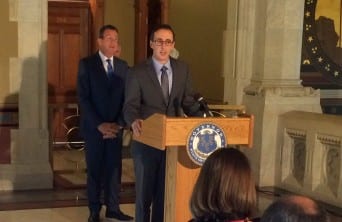 Brian Durand will assume the role of chief of staff for Gov. Dannel P. Malloy on Sept. 28, 2015. Photo courtesy of the Office of Gov. Malloy

Brian Durand will assume the role of chief of staff for Gov. Dannel P. Malloy on Sept. 28, 2015. Photo courtesy of the Office of Gov. Malloy

Ojakian announced in July that he would step down as the governor’s chief of staff and was named interim president of the Connecticut State Colleges and Universities on Friday.

Durand, who like Gov. Malloy is originally from Stamford, has been deputy chief of staff since 2012 and previously worked at the Office of Policy and Management.

“Brian Durand has been a trusted friend and advisor since I first began working with him in 2004,” Governor Malloy said in a news release. “He has excelled at every challenge and task he has been presented with, and I look forward to continuing to work with him in his new role as chief of staff for my administration.”

“I have been honored and privileged to work with Governor Malloy for so many years,” Durand said in the release. “Whether it has been improving Connecticut’s economy, investing in transportation or reforming our criminal justice system, Gov. Malloy has always put Connecticut’s interest first. He works hard and demands the same for those around him.  I look forward to helping lead such a talented and hardworking staff.”

Durand lives in West Hartford with his wife and two sons.