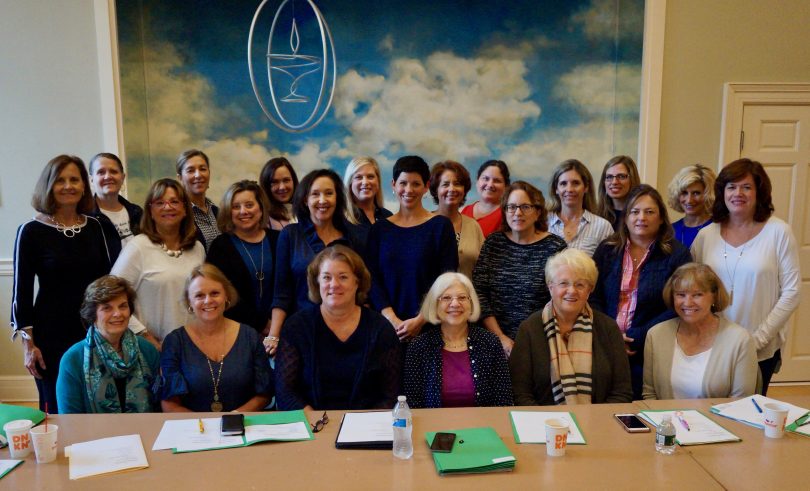 As 2019 comes to an end, The Bridge Family Center is wrapping up the celebration of its 50th anniversary, and looking forward to its signature fundraiser, the Children’s Charity Ball, which will return to West Hartford and be held at the Hartford Golf Club on Saturday, Jan. 18.

As the organization enters its sixth decade, the theme for this year’s gala is “Staying the Course.”

“In 1969, a group of courageous, compassionate, and bold people saw a need in the community of West Hartford and chose not to look the other way and hope that someone else would handle the situation,” said Bridge Executive Director Margaret Hann. “Instead, they stepped in, rolled up their sleeves, opened their hearts, minds, and checkbooks to make a difference in their community.”

What they saw in 1969 were teenagers who had nowhere to go, hanging out in the streets, often turning to drugs or other illicit behaviors.

The first thing the Bridge did was open a coffee-house style drop-in center, where teens could have “rap sessions” among themselves, as well as with clergy, police, and school administrators. The goal, Bridge staff said, “was to create a social alternative to the drug culture and a place where young people and adults could meet, talk, and solve problems. In its first year, nearly 1,000 people visited the Bridge.”

The Bridge now serves more than 9,000 children, adults, and families each year and operates six residential programs, with 45 beds throughout the state, for youth ages 11-18. The Bridge offers programs to assist youth as they transition to independent living and adulthood, operates counseling centers in West Hartford, Rockville, and Avon, and also operates the Family Resource Center at Charter Oak International Academy in West Hartford.

The Bridge also serves as the Town of West Hartford’s youth service bureau.

The annual Children’s Charity Ball provides a significant portion of the organization’s budget, and this year John and Judy Bierly and Paul and Mary Butler will serve as honorary chairs of the event.

“The Bridge and I have been joined at the hip (or the heart) since 1993,” said Judy Bierly. “I was privileged to work there in communications for 23 years. Now I am honored to serve on the Bridge Board of Directors and the Children’s Charity Ball committee. I volunteer a morning a week at the Bridge’s Family Resource Center and find joy in helping staff as they work with little ones and their parents or other caregivers. On Jan. 18, 2020, my husband John and I will be co-honorary chairs of the Bridge gala along with Mary and Paul Butler. We are honored to do so,” she said.

“Our ED, Margaret, says once you are connected to the Bridge you never leave, and the truth is, I don’t want to leave,” Bierly added. “I am deeply committed to the Bridge’s mission of helping kids and families through life’s challenges. I have witnessed the difference its programs and the compassion of its staff have made in countless lives. I step back now and then to ask myself why I am doing this. The answer is always the same – in some small way to give kids and families a chance at a better life.”

“Having been involved with the Children’s Charity Ball for the past 20 years and as a former board member, Paul and I had the opportunity to meet people whose lives have been directly impacted by the Bridge and see up close the difference our support can make,” Mary Butler said. “We are honored to join Judy and John Bierly as this year’s honorary chairs.”

Susan Hamilton, chair of the Bridge Family Center’s Board of Directors, has been a member of the board for more than eight years and expressed her excitement about leading the organization through the 50th anniversary milestone and into its sixth decade.

“I have been fortunate to work in the field of child welfare for over 25 years and have seen firsthand the impact the Bridge has had on the lives of the children and families it serves,” Hamilton said. “I am always confident that they will be in good hands with the Bridge and will develop true and lasting connections that will change their lives.”

“So many things have changed in our world over the past 50 years, but many things remain the same,” Hann said. “For five decades, the Bridge has consistently placed children and families at the center of our work. We offer shelter, guidance, and acceptance. Like our founding leaders, we continue to work hard. We do not give up easily and we make it happen … every child, every family, every time.”

Scot Haney of WFSB will return as emcee, and the event will include a cocktail reception, dinner, dancing, and live and silent auctions.

More information about the Children’s Charity Ball can be found on the Bridge’s website.