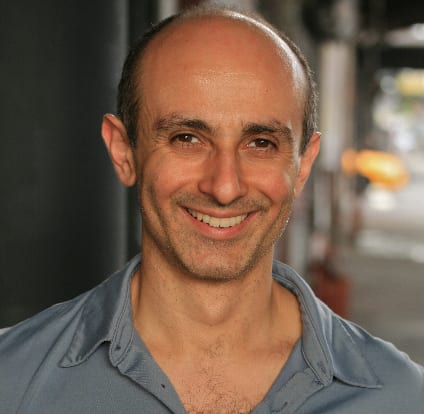 Thanks to a generous grant, the West Hartford Public Schools theatre programs will welcome acclaimed actor Stephen DeRosa to work in person with the students at Hall and Conard this spring.

DeRosa will be a guest artist with students during their acting classes, and will provide coaching during rehearsals for the spring shows. The teachers will integrate his skills and talents into their classes and rehearsals in different ways.

At Hall, DeRosa will focus on “making big choices” with the students, creating clarity in their characters’ motivations and emotions. He will also work with students to bring Shakespeare’s poetry to life, and help the advanced students in creating character from text. For the spring show, “Romeo and Juliet,” DeRosa will provide workshops and feedback as students rehearse their scenes.

During acting classes at Conard, DeRosa will focus his work with the students on building their skills in comedy, working with Shakespearian language, and some specific scene studies with the advanced students. His experience on the screen will also be put to good use with after school rehearsals, as students are preparing to record an original film written by a Conard senior. DeRosa will work with the students on scenes from this original script, as well as scene studies from other popular movies.

This generous grant is designated to employ a professional theatre actor to WHPS high schools as a guest teaching artist to develop an on-site program/workshop for acting students during the spring 2021 semester. The purpose is to support the acting teachers and supplement their performance classes as well as their after school casts at rehearsals.

The teachers spent some weeks planning and have devised a schedule that will bring the best possible experience to the students as they harness DeRosa’s professional skills. The teachers have expressed their deep appreciation for the grant and the impact it will have on the students.

Hunter Parker, Hall’s drama teacher, has emphasized how his strengths as an artist with experience both on screen and in Shakespeare will line up with the students’ needs as they prepare for their recorded Shakespeare production. Said Conard’s drama teacher Corinne Kravetz, “We are very excited, as these projects are very focused on the needs of these specific groups.”

On screen, DeRosa is best known for his recurring role as Eddie Cantor on Boardwalk Empire, and has also made guest appearances on Law & Order, Third Watch, and Ugly Betty. He also had roles in The Man Who Came to Dinner (2000) and Wormwood (2017).

When asked why they wished to make the grant, the anonymous donor provided the following explanation:

“We appreciate the role of theatre and the performing arts department in our West Hartford Public Schools. While watching outdoor performances at the high school, it was apparent to us that performing live theater with other students is such an important part of so many of our kids’ lives. And watching how much care the teaching staff put into ensuring the safety of the cast and crew was impressive – and touching.

“Therefore, in appreciation of the WHPS Drama teachers and the role theatre plays in supporting so many students, we wish to present this grant to the Performing Arts Department to create a Professional Guest Artist Teaching program beginning in the Spring semester of 2021.

“The grant is for the department to create a guest teaching artist program. We suggested leveraging the availability of professional actors while Broadway and most productions are dark during the pandemic in order to provide a special experience for the students to learn directly from a working actor. The teachers will define how the funds are to be used, and we hope that this unique experience is successful and inspires students to continue their theatre studies.”

Andrew Mayo, Supervisor for the Department of Fine and Performing Arts, expressed deep gratitude for the grant: “The pandemic has been a very difficult time for the Performing Arts. The freedom to perform in front of an audience has been sharply curtailed, and for the students who enjoy and appreciate the process of rehearsing and performing, it has been difficult to sustain their energy while auditoriums and theaters remain dark. This grant has come along at a great time, providing for students the rare opportunity to spend quality time with a professional of such caliber who will add so much to their classes and rehearsals. We are deeply grateful to the donors, and to all of the community, who have come out in such strength to support the Arts.”