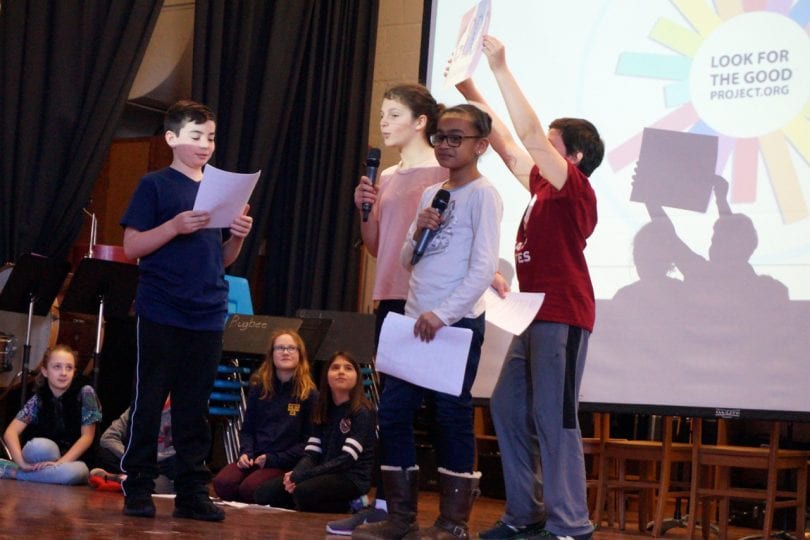 The students at West Hartford’s Bugbee Elementary School will spend the first two weeks of March ‘looking for the good,’ in a program about gratitude that is being led by group of fifth graders. 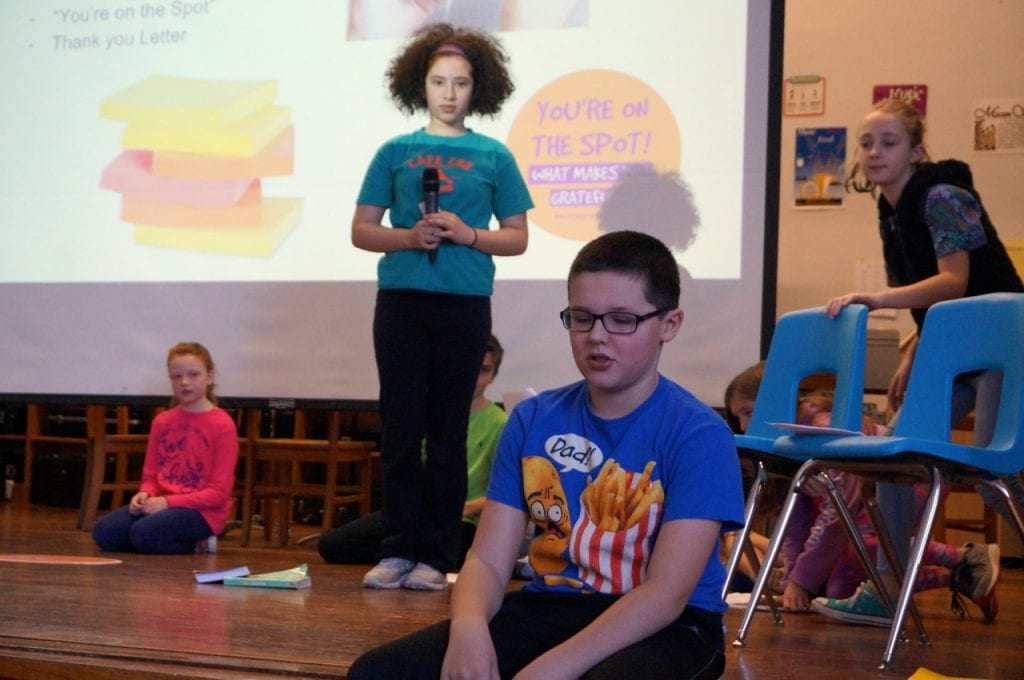 Students streamed into the Bugbee Elementary School auditorium Tuesday morning for the “monthly buzz” assembly, but this assembly included the announcement that a special program will be launching Monday that will involve every students in the school.

Principal Kelly Brouse said she heard about the “Look for the Good” project from a friend last summer, and when she spoke with the staff about it the teachers agreed that they wanted it to be student-run. The project’s mission is built around “the core belief that gratitude changes mindsets, reduces violence, and improves everything” according to the Look for the Good website.

“The idea is that these efforts will teach students how to ‘look for the good, and appreciate the world around them, from the people, to the experiences to the beauty and beyond,” Brouse said. “The underlying effort is to teach and promote strategies that strengthen mental health and encourage a climate of caring, compassion, and support for one another.”

Fifth-graders wrote applications to be included in the group of 20 who were chosen to lead the program, which has been in the planning stages since December.

The student leaders took the stage Tuesday, and performed a series of skits to inform the rest of the community about the gratitude-based project.

“I wonder if there is a way our whole school can learn about the importance of gratitude?” Angealicia Chavez said.

“I have a feeling all these people sitting on stage around us might have an idea … ” said Emma Sack.

As part of the presentation, the audience viewed a video of a humpback whale that inspired the project. The whale had become entangled in 1,200 pounds of crab trap ropes and had a 3,000 pound anchor attached to its tail. When the 50-foot whale was freed by a group of four trained divers, she nuzzled them, seemingly showing gratitude.

Students leaders told the audience that the whale needed a hero to get away from the crab traps, and heroes can also help get that “crabby voice” out of your head before it leads to negative words and actions.

“A hero is someone who Helps Everyone Respect Others. This is why anyone can be a hero. Even a bully, because bullies are people, too. And if we’re really honest, we’re all bullies sometimes, even if we’re just bullying ourselves,” a student leader said.

During the two-week program, the morning announcements will ask students to think about ways they can be grateful, write them down, and stick them to “gratitude walls” throughout the school.

“You’re on the Spot” spots will be placed throughout the school and anyone who steps on one is asked to stop and think about what they are grateful for.

Students leaders will also pass out “Kindness Cards” which say “You Matter” to anyone they see performing an act of kindness. Those who receive the cards will pay it forward by passing them to others. In a series of skits, the students demonstrated some of the situations which could lead to receiving a card, like picking up books another student dropped, helping clean up a spill in the cafeteria, or helping a students who is frustrated with a task.

“If you receive a card when we start the project, ask the person why they gave it to you, and then start looking for great reasons to pass it on,” Megan Miller told the audience. “You never know who might have one, so keep being your best so others can see the good in you.”

In the second week of the program, all of the students will pick a person in their life who “matters,” and write them a letter telling them why. The students leaders will each be assigned a classroom and work on the letters together with the teacher.

The student leaders told the audience that gratitude makes you kind and generous, and helps you become a “hero in your school.”

“Don’t forget – you all matter!” they said in unison.

Families are being invited to participate as well. Brouse sent a letter home telling them that when they are in the building, they can also stop on the gratitude spots in the hallways, or write a gratitude on a sticky note and add it to one of the walls.

“If a kindness card makes its way home by accident, you can applaud the kindness of your child and remind your child to take it back to school the next day and pass it on,” she wrote. And family members can also write a “You Matter” letter. She encouraged parents to ask their children what they have learned about gratitude.

“Our goal is always to teach kids that you have to look out for others, look for the good,” Brouse said after the assembly. “Teaching them to take care of people will help make them into contributing citizens. Social/emotional learning is critical.”

In addition to learning about “Looking for the Good,” the Bugbee students cheered for the start of “Reading Spirit Week,” which will culminate Friday with students dressing up as their favorite book character. Fifth-grader Jacob Dillon, who served as emcee, led the students in reciting the Bugbee Promise and all sang the school song.

The Bugbee community is also planning an international night for March 27, with the theme: “We’re birds of all feathers who can flock together and together we are one.”

A talent show held on Feb. 23 raised $1,116 for aid to Puerto Rico. “The student council is making sure that every penny will go right to a school in Puerto Rico,” Brouse told the audience. “Bees for Puerto Rico” t-shirts will also be sold as a fundraiser. 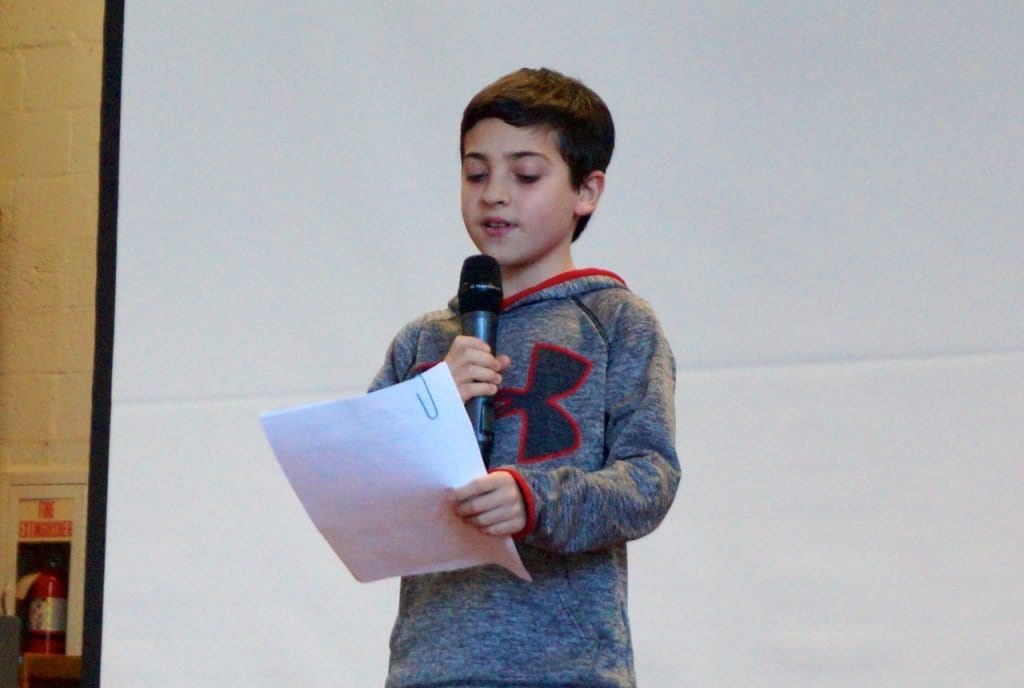 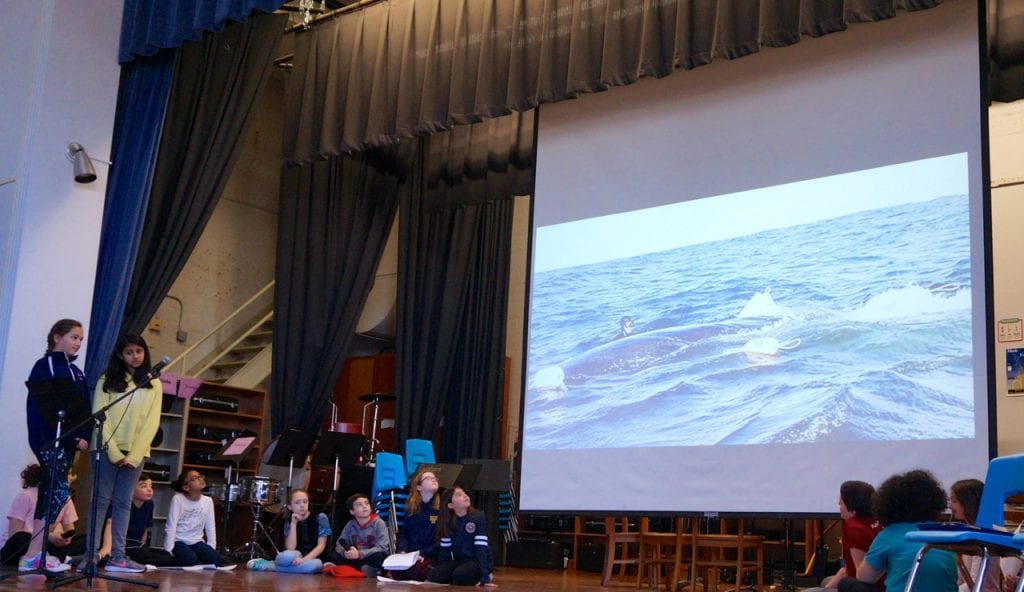 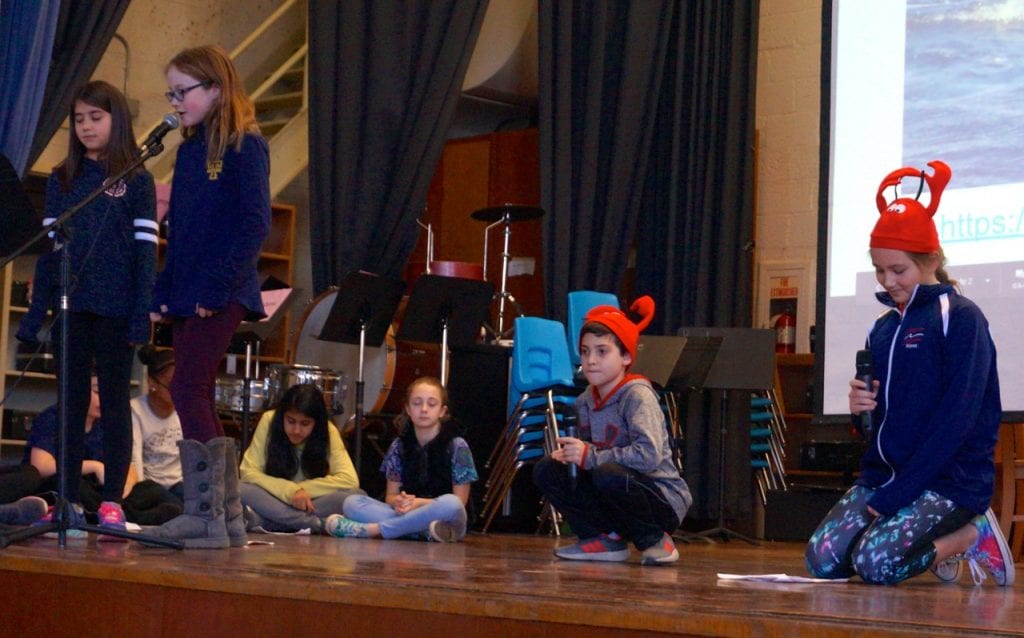 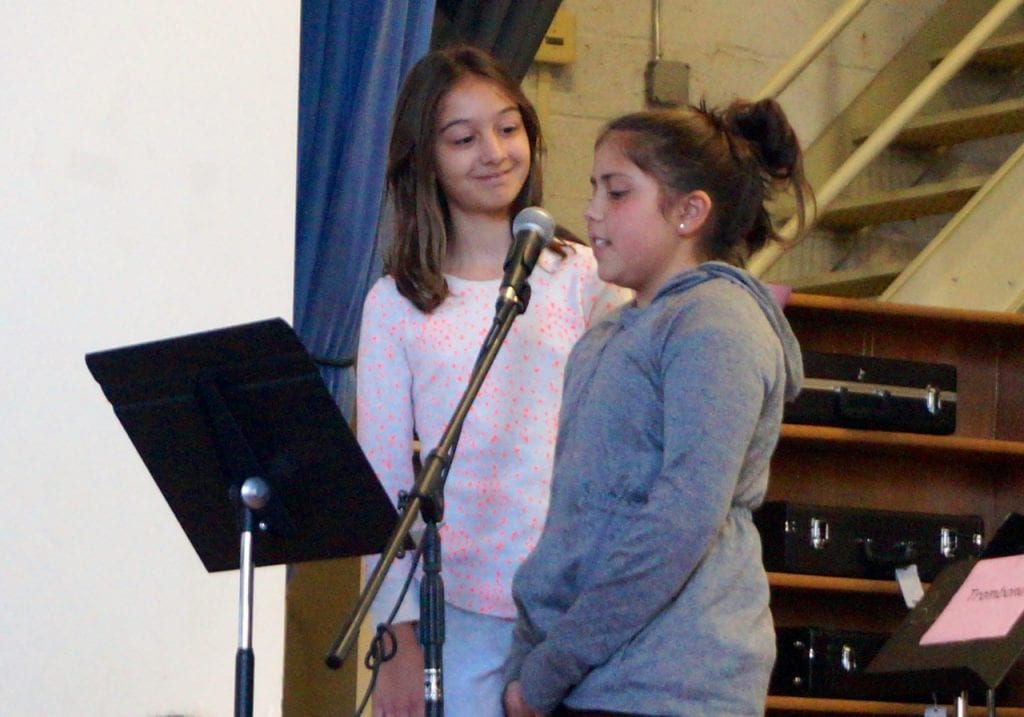 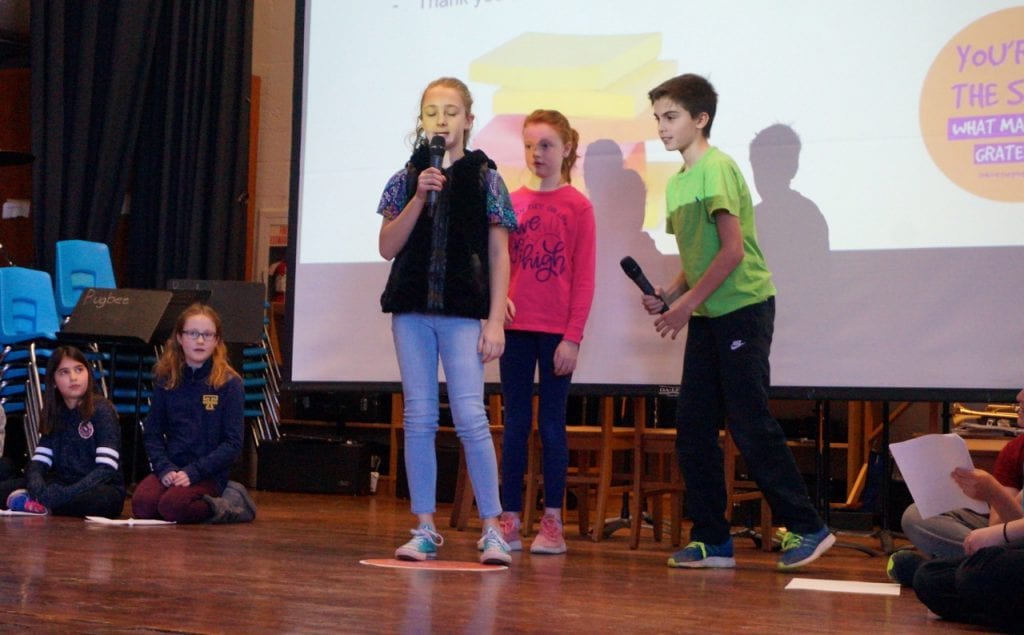 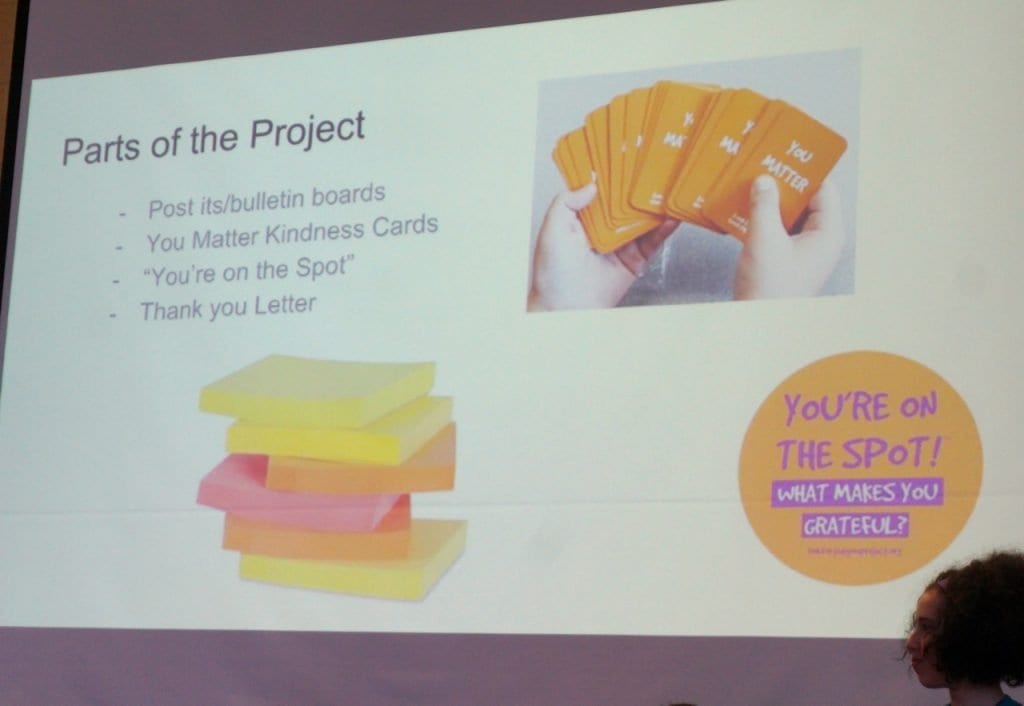 Elements of the ‘Look for the Good’ program. Photo credit: Ronni Newton 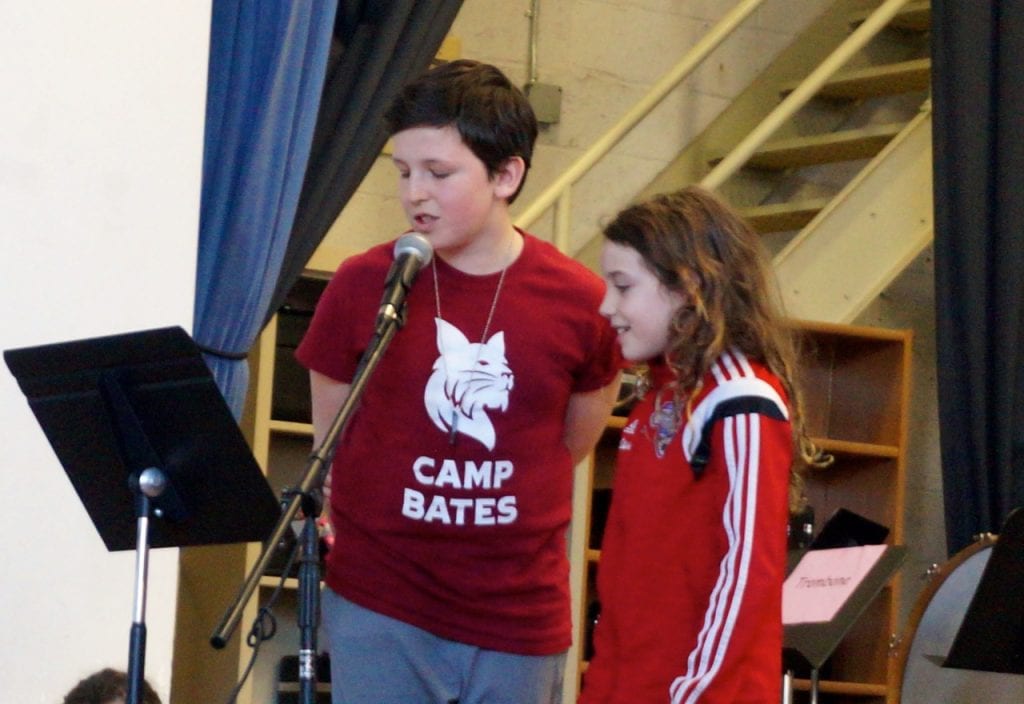 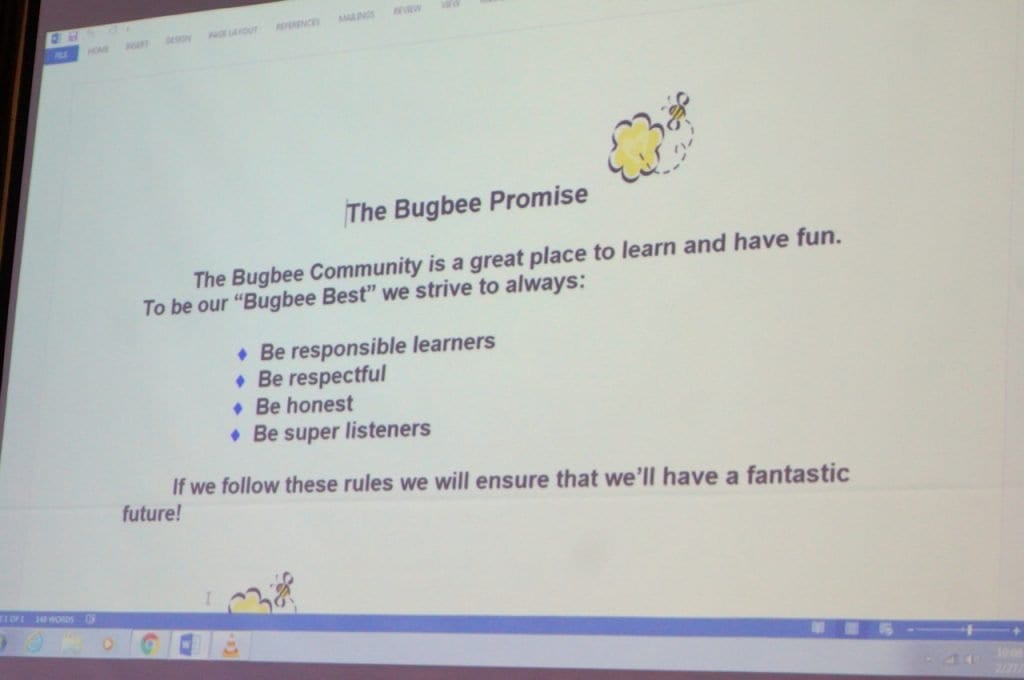 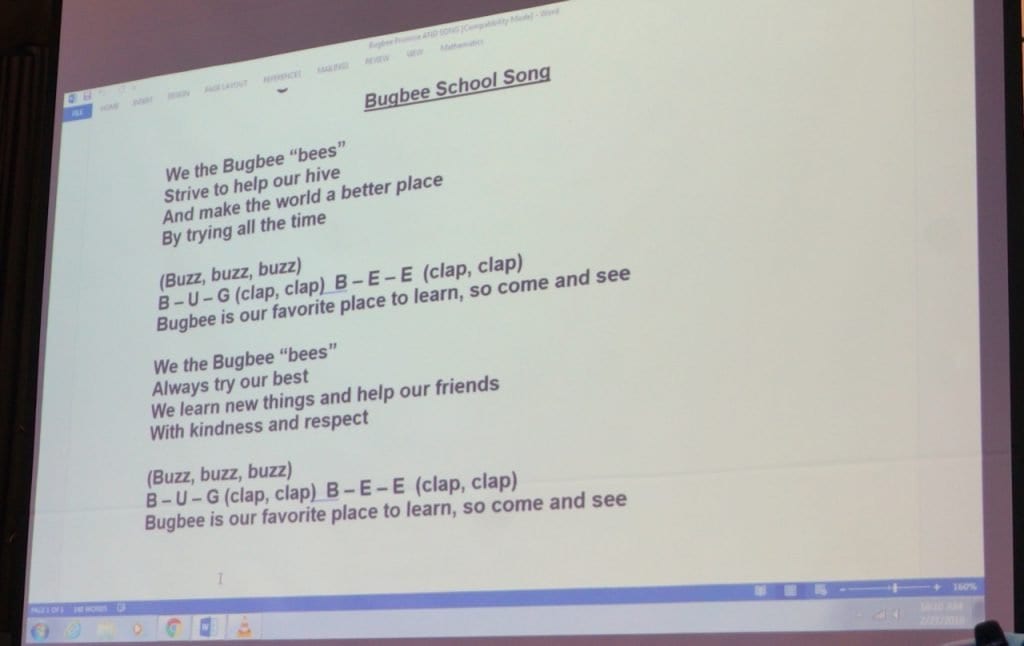