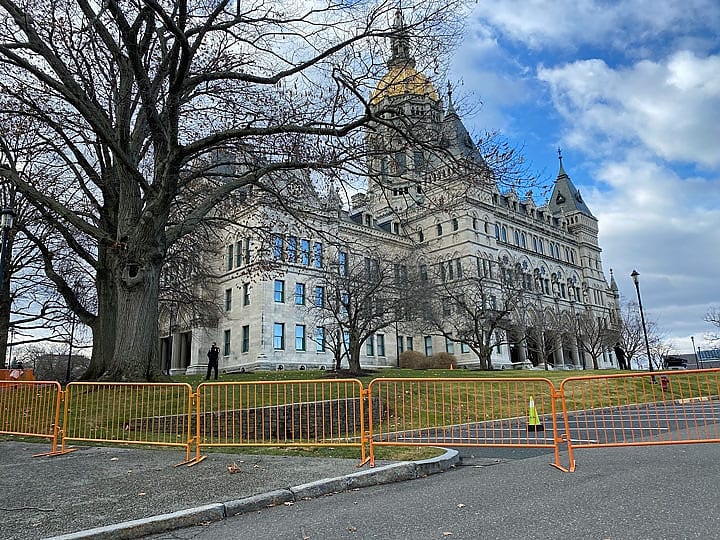 Roadways were blocked off – including streets in West Hartford near the governor’s residence – and in Hartford near the Capitol, but although there were plenty of law enforcement officials and reporters on hand Sunday, a large protest did not materialize.

Law enforcement and reporters descended on the state Capitol Sunday to watch as a mere handful of protesters expressed their views.

An FBI memo last week warned that protesters may use all 50 state Capitols as places for further protests in the days leading up to the inauguration of President-elect Joe Biden Jr.

One protester, Joanna Iovino, said she was there to fight against fascism. She said if only Trump supporters showed up for the protest then they would get all the media. 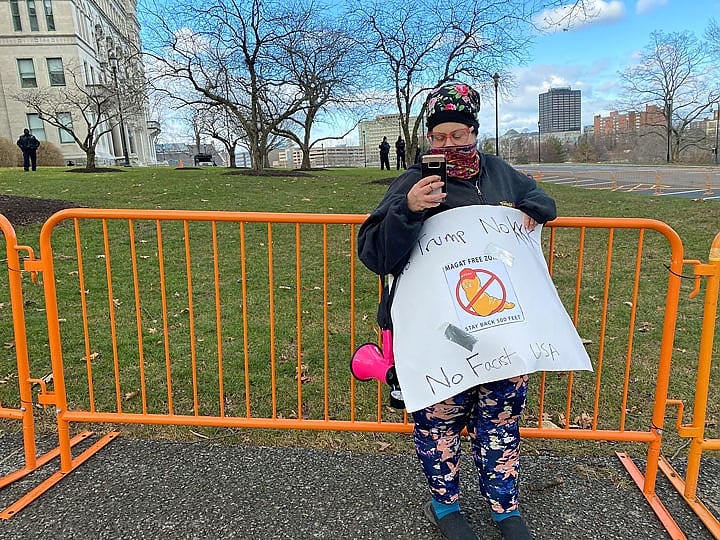 “If somebody had stood up to Hilter in the beginning, things may not have happened the way they happened,” Iovino said. “We don’t want things in this country to keep going further and further to the right and end up with another confederacy.”

But no Trump supporters per se showed up Sunday.

Just another protester with a different point of view.

A 17-year-old from Norwich who gave reporters a false name lingered outside the Capitol with his grandfather, Don, and a Revolutionary War-era flag with the words, “An appeal to heaven,” written on it. Every few minutes, he was answering questions from reporters who arrived Sunday expecting a horde of angry Trump supporters.

Although he came to push for policy changes, they had little to do with Donald Trump. Instead, the home-schooled teenager called an end to COVID-19 public health restrictions, an end of police brutality and a loosening of state gun control restrictions. Being 17, he didn’t vote in the 2020 election. If he could have, he said he would have voted for libertarian candidate Jo Jorgensen. He seemed amused by all the attention.

“The media showed up in this swarm, the cops have swarmed the area. I think the FBI’s around. They’re all here wasting their money. It’s pretty cool,” he said.

The 17-year-old told reporters his name was Duncan Lemp. Lemp is a far-right anti-government extremist who was shot by police on March 12, 2020 in his Maryland home. It’s unlikely that was his name. 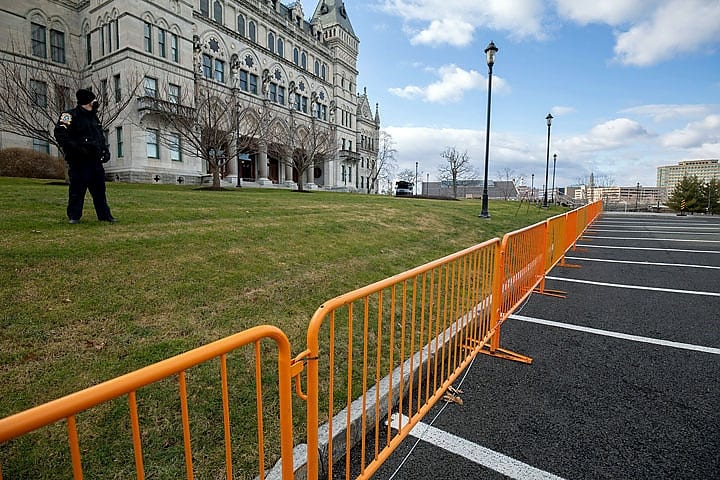 Brian Foley, a former Hartford police deputy chief and current executive assistant to the Department of Emergency Management commissioner, said they had conversations with law enforcement across the country Friday and the steps Connecticut took to protect the state Capitol were parallel to what was happening in other states.

“We’d much rather be talking about how we over-prepared than how we underprepared,” Foley said. “Moreover our messaging and transparency was intended to dissuade any large violent events and dissuade any bad actors from coming to the Capitol or any other location.”

Foley said when social media shut down many accounts in the wake of the insurrection at the U.S. Capitol, police lost some ability to gather intelligence – but the protesters also lost the ability to communicate with each other.

Foley said they had communications that showed people were told to bring firearms to state capitols and they had to be prepared for that.

On Saturday, a widely publicized drive-by rally from New Haven to Hartford and Manchester to Hartford showed similar depressed turnout. Three vehicles with pro-Trump paraphernalia circled the Capitol on Saturday. Protesters had been warned they did not have permission to use the IKEA parking lot on Sargeant Drive to gather, and police were on site to guarantee that did not happen.