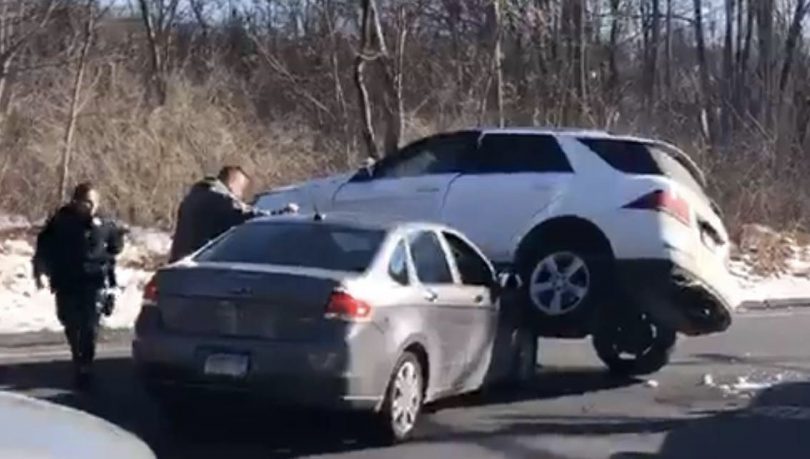 A Mercedes SUV came to rest on the hood of a Ford sedan following a crash on Simsbury Road in West Hartford on Wednesday morning. Photo credit: Dennis House, WFSB, used with permission

Two people were treated at St. Francis Hospital for injuries sustained in the Wednesday morning collision.

West Hartford Police said that two people sustained injuries following a crash on Simbury Road Wednesday morning in which one vehicle came to rest on top of the other.

Police said that they received a call at 8:45 a.m., and responded to a report that a vehicle had either rolled over or was on its side, but when they arrived at the scene they found that one vehicle had actually come to rest on top of the other’s hood.

According to police, an investigation revealed that the driver of a Mercedes SUV had pulled out of Mohegan Drive, turning left to head west on Simsbury Road, and was hit by a Ford sedan that was traveling east on Simsbury Road.

The driver of the Ford was transported to St. Francis Hospital for treatment of injuries sustained in the crash, police said. The nature of the injuries was not provided by police.

The driver of an SUV was issued an infraction for failure to obey a stop sign. The driver initially refused medical attention but later went to St. Francis Hospital complaining of neck pain and a headache, police said.

Both cars were towed from the scene.