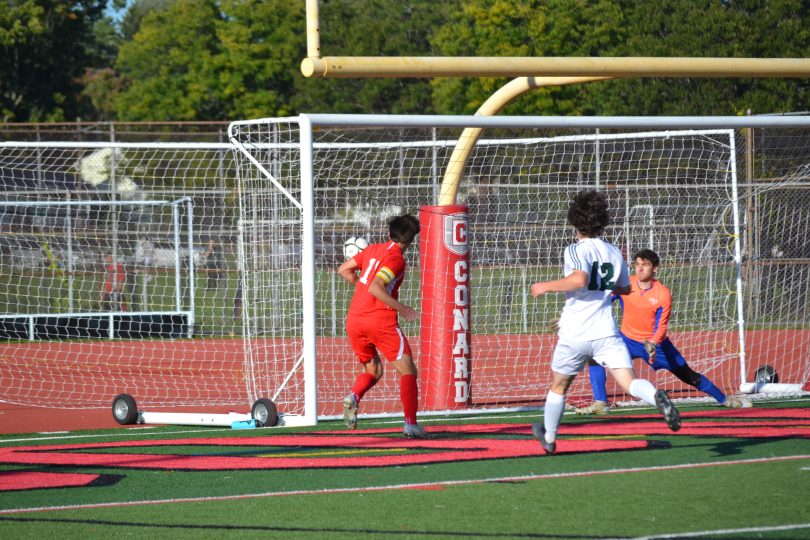 The Red Wolves have run their unbeaten streak to 6.

Tony Catanzaro’s three goals led a quick strike offense for Conard as they overwhelmed the Northwest Lions 5-0 in a boys soccer match Tuesday in West Hartford.

The Red Wolves have not lost since a 1-0 defeat in their opening game to Glastonbury. The streak includes 1-1 ties with powerhouses Farmington and Darien and a 2-2 tie with once-beaten Avon. “We are trending in the right direction,” said first year head coach Becca Lewis of her squad.

Tuesday, the Red Wolves (3-1-3) went for the jugular vein early against an outmatched Northwest Catholic. Catanzaro opened the scoring  just 2:49 in with a shot to the lower right corner of the net. Diwash Pun made it 2-0 just moments later and then Catanzaro netted his team’s third goal with just 4:10 played. The speedy forward ran down a long ball, pushed it around a charging Lions goalie, then gathered it up and put it in the open net.

Conard dominated the time of possession and could have scored several more. A combination of saves from Patrick Sullivan in the Northwest goal and nine offsides calls against Conard kept the score at 3-0. “We kept our composure and showed mental toughness,” Lewis said. “We know that there are ebbs and flows in the game.” 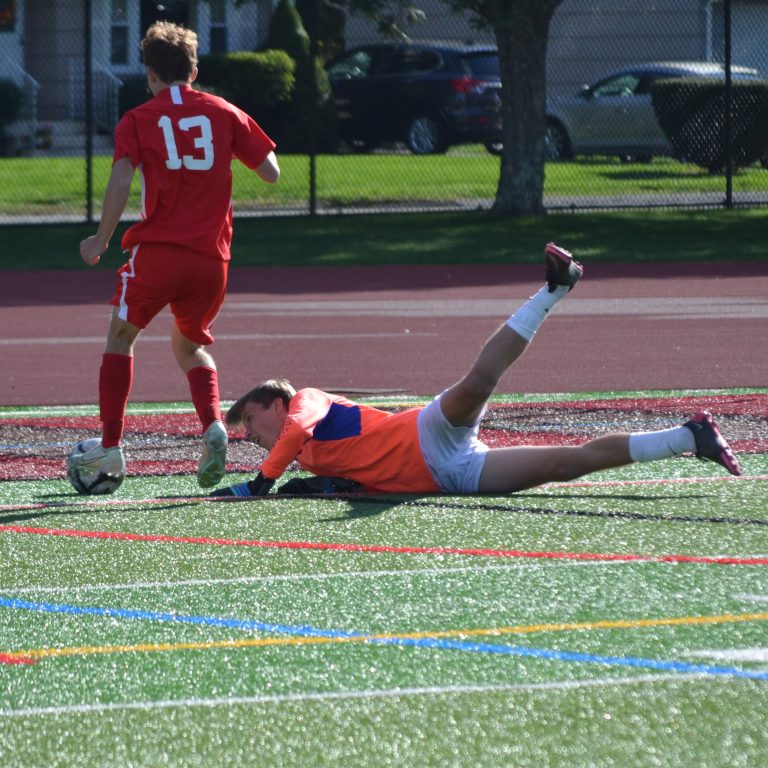 Northwest refused to budge off running its trapping defense that sought to keep Conard isolated at midfield, but the Red Wolves sent long ball after long ball into the attacking zone, and using their speed outran the defenders.

Sullivan came up big when he stopped Gabe Garcia’s breakaway bid and Catanzaro and Rivas worked a give and go off a short corner that saw Catanzaro’s curling shot from distance hit the corner of the crossbar and post.

The Lions had their best chance with just over 4 minutes to go, but their free kick from about 30 yards out slammed off the Red Wolves’ wall of defenders. Ben Hammond was forced to make just one save in the Conard net, and that came on a slow rolling shot with just 20 seconds to play in the half.

Both sides changed goalies to start the second half, but that did not change the fortunes of either team. Northwest had a sustained possession to open the half, which resulted in their only corner kick of the match. After that it was Conard’s offense that continued to dominate. 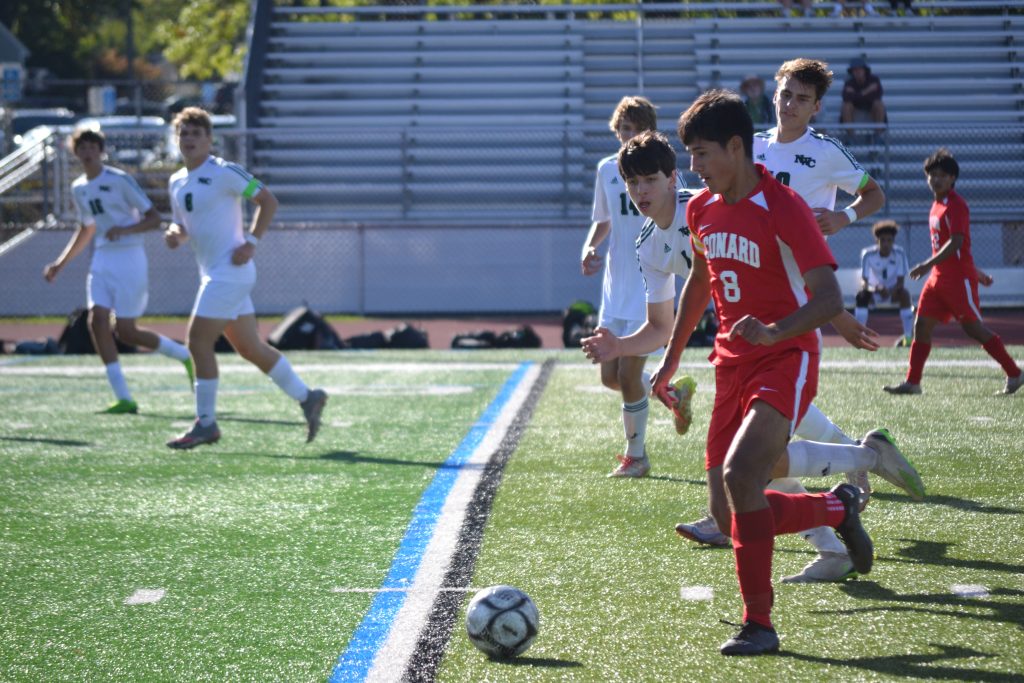 At 3:24 into the second half, Kevin Rivas chased down a through ball, chipped it over a sliding Zachary Sinclair who came charging off his line, and then calmly slid it in for the 4-0 lead. Less that 2 minutes later it was Catanzaro getting his third on the day when he deftly put away a perfectly placed cross from Pun at the far post.

Both Rivas and Catanzaro had chances after that, but Rivas went high with his shot and Sinclair stopped Catanzaro’s bid.

“We have high expectations and I like the style of play we’ve been showing,” Lewis said. “We are gaining confidence with each other.”

About the only negative for Conard came with just 5:37 to play when Aiden Policelli went down and had to be taken out of the game after a collision with Sinclair. The two were chasing a 50-50 ball and as Policelli got to the ball, Sinclair crashed into his knee, sending the junior tumbling to the ground. Sinclair was shown a yellow card for the dangerous challenge, while Policelli was helped to the bench.

The Red Wolves next look for a little payback when they travel to Glastonbury on Thursday for a rematch with the unbeaten and untied Guardians. 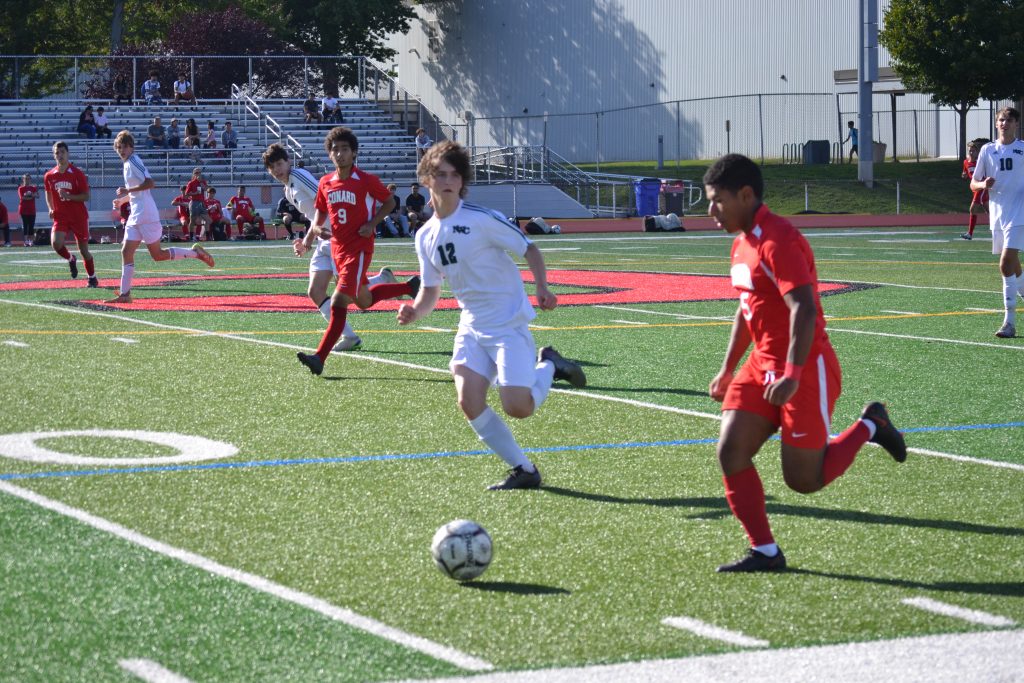