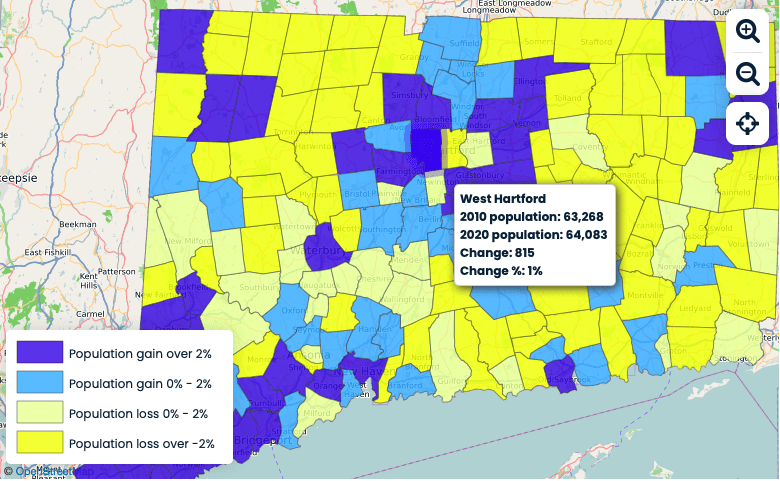 U.S. Census Bureau data released Thursday shows that Connecticut has not only grown more diverse over the last decade, but it also has added 31,847 more residents.

Most of that population growth was in Fairfield County, which gained 40,590 people. Hartford and New Haven counties also saw increases in population, but the other five counties lost people.

West Hartford gained 815 residents, and the town’s total population is now 64,083, according to census data.

Lt. Gov. Susan Bysiewicz said she was encouraged by the data.

The population growth is enough to prevent the state from losing a congressional seat.

Once a decade, a bipartisan group of lawmakers is required to adjust the lines of congressional and legislative voting districts to reflect the results of the U.S. Census survey and ensure voters in each district get equal representation. They now have a Sept. 15 deadline to meet and they will need to make some adjustments for areas with bigger population growth.

“A change of a thousand people in a particular area of Stamford makes a big difference to the House district lines in a community like that,” Rep. Gregg Haddad, D-Mansfield, has said. “The challenge gets greater as the districts get smaller.”

The redistricting committee will also be the first to implement a new law adopted this year which requires incarcerated people to be counted as members of the voting districts where they lived before they were imprisoned. In the past, they have been counted in the district which houses the correctional facility where they are incarcerated.

Fairfield County is the most diverse of the state’s eight counties, with a white population of 61%. It’s followed closely by Hartford County, with a 61% white population, and New Haven County with 62.9%.

Cheri Quickmire, of Common Cause in Connecticut, said that the changes also will impact redistricting.

“While this process has historically been conducted behind closed doors with minimal public input in the way of local public hearings, 2021 is our year to flip the script and ensure that the voices of our communities, particularly those of Black, Indigenous, Latino, Asian, Pacific Islander and other communities of color are at the center of the conversation,” she said.

In terms of rankings by town, Bridgeport remained the largest city in the state. Stamford jumped from fourth to second largest, growing by 12,827 people, or 10%, surpassing both New Haven and Hartford. In dropping to fourth, the state’s capitol city lost 3,721 residents over 10 years. The rest of the top 10 cities by population remained the same with Waterbury in fifth, followed by Norwalk, Danbury, New Britain, West Hartford, and Greenwich.

Searchable census data by town can be found on CTNewsJunkie.com here.