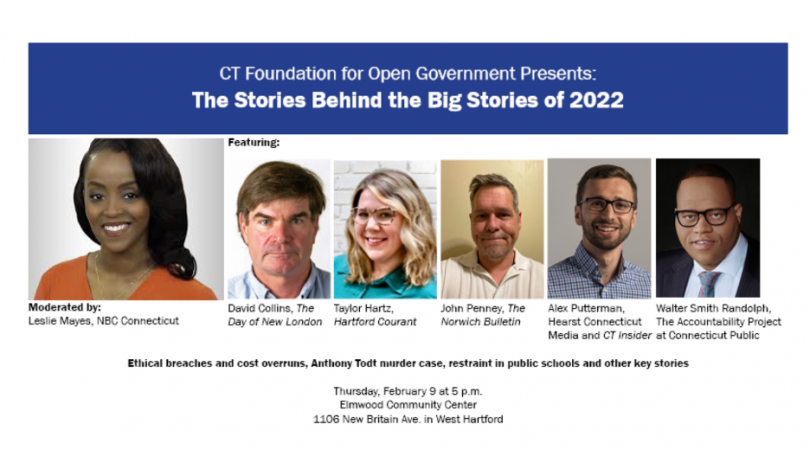 The Connecticut Foundation for Open Government will host the ‘Stories Behind the Big Stories’ of 2022 on Feb. 9 in West Hartford.

For the seventh year, the Connecticut Foundation for Open Government (CFOG) will hold a panel discussion of top Connecticut journalists telling how they landed the major news stories in the state in the past year.

The event, “The Stories Behind the Big Stories of 2022,” will be held on Thursday, Feb. 9 at 5 p.m. at the Elmwood Community Center at 1106 New Britain Ave. in West Hartford.

The discussion will be moderated by Leslie Mayes, a reporter and anchor for NBC Connecticut. The panelists are:

The journalists will discuss the major stories they broke in 2022, including Collins’ use of the state Freedom of Information Act to uncover ethical breaches and cost overruns at the Connecticut Port Authority. Hartz will explain her coverage of the Anthony Todt murder case for The Day and her podcast for “Looking for the Todt Family.”

Penney will describe what it took to cover the controversy in Killingly about a school-based mental health clinic. Putterman will talk about his story on the way schools in wealthy Connecticut towns dominate high school sports championships as well as Hearst’s project on the use of restraints in public schools.

Smith Randolph will discuss an FOI controversy in Avon, where the town has refused to let the public see a document describing incidents involving a former police chief.

The event is sponsored by CFOG, which is a nonprofit organization founded in 1991 by citizens of Connecticut interested in promoting open government and the public’s right-to-know. Its programs are carried out by a volunteer board of directors drawn from the news media, academia, the law, business and government.

The panel discussion is sure to be fascinating for anyone interested in the behind-the-scenes work of reporters and editors in the demanding field of journalism today. The event is designed to help the public understand the resourcefulness and professional tools journalists employ every day to get the motives and full facts behind important stories.

The event begins at 5 p.m. with registration and a reception, and the panel discussion will follow from 5:30 p.m. to 7 p.m. A $10 donation is requested, which includes refreshments.

Tickets can be purchased in advance using the “donate button” or QR code at https://ctfog.org or at SBTBS_2023.Walk-ins are also welcome and can pay at the door with cash, checks made out to CFOG or with credit cards through PayPal. The event will also be live-streamed.

Watch for more details at https://ctfog.org.